We don’t need to interpret the words of the Oracle of Delphi. We know what the future holds. Climate change is no longer an empty threat; it’s the promise of an end to the world as we know it. While many artists—like Olafur Eliasson and Tomás Saraceno, to cite just two big names—have engaged with the issue of global warming in provocative and imaginative ways, fewer have gone beyond pointing out the obvious: it’s happening. It’s this nuance in confronting the massive fact of our warming planet that sets ‘A Year Without Southern Sun’ at Galerie XC-HuA apart. The exhibition is an intensely intellectual and engaging show that explores the links between climate change and (de)colonization. Each of the nine artists represented brings to light an aspect of how these two events have unfolded together and continue to be intertwined. 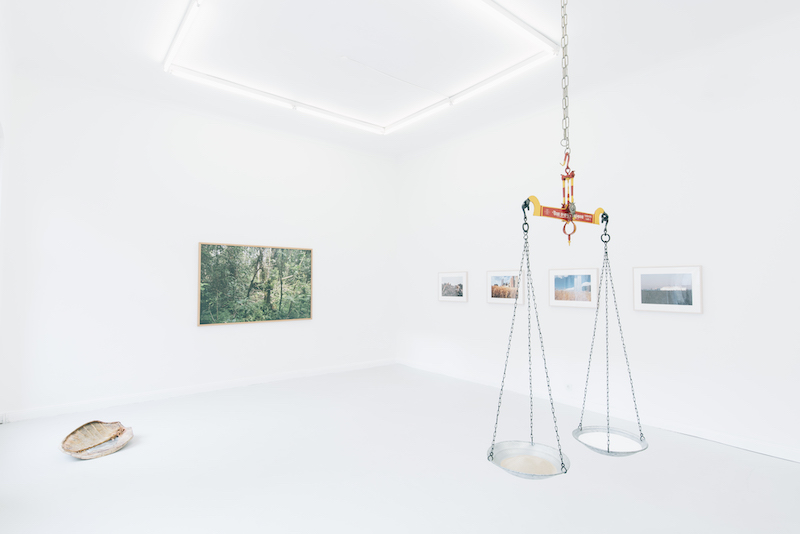 At the heart of the show is Nadia Kaabi-Linke’s ‘Salt and Sand’ (2016). Kaabi-Linke’s work speaks eloquently to the tension between the demands of the market and those of the Earth and to the complicated relationship between the supposed victors and vanquished, former colonizers and colonized. Suspended from the ceiling in the center of the first room, ‘Salt and Sand’ is a market scale, the sort that street vendors use in Kolkata. With salt on one side and sand on the other, the scale tips over time toward the side with salt, as it absorbs moisture. The juxtaposition of the two resources is an appropriately ambiguous metaphor. Salt has helped to produce and dismantle some of the world’s greatest empires, before and after European colonization and industrialization. The trans-Saharan salt trade was responsible for building up northwestern Africa’s powerful ancient and early modern empires—Ghana, Mali, Songhai—and was thus part of the lure that brought the Portuguese to Africa in search of gold, ivory and slaves. Salt, thereby, set in motion a long chain of global exploitation that drove the Portuguese to establish trade-forts on India’s coasts. Centuries later, salt was also one of the commodities that the British sought to monopolize in India, leading to a massive anti-colonization protest, the 24-day “Salt March” of 1930. With this complex background in mind, what might it then mean for the Earth (the eroding beaches represented by the sand) and for the Global South (represented by the scale), if the balance tips towards the market (the salt)? To its credit, ‘Salt and Sand’ doesn’t provide a simple answer or suggest that there’s a clear moral imperative to guide the viewer’s interpretation but rather raises questions about the socio-economic entanglement of these forces. 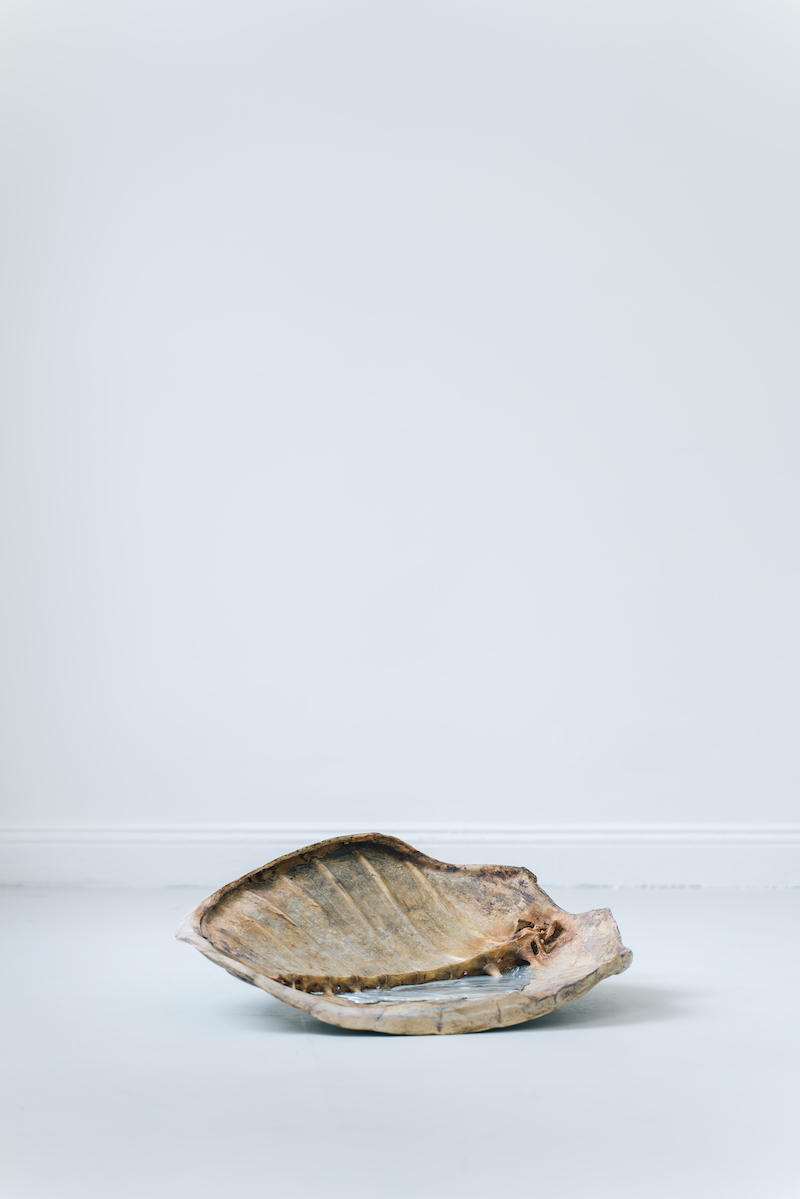 Mathieu Kleyebe Abonnenc’s ‘Le veilleur de nuit, pour Wilson Harris’ (2018) likewise makes use of material objects as metaphors for the intimate connection between the Global North and South and the exploitation of the Earth. Abonnenc poured liquid gallium—the metal used to produce the semi-conductors found in most electronic devices—into a giant tortoise shell, an ancient Chinese symbol of longevity. Banned in 2016 from being mined in Germany, the bulk of liquid gallium (95%) comes from China, the nation that also produces the lion’s share of carbon dioxide emissions. Turned upside down, the hollowed shell lies inert, helpless, weighed down by the shiny, silver pool of hardened metal hidden inside its belly.

Less subtle but no less haunting are the works that hail from an earlier era, by American artists Agnes Denes and Gordon Matta-Clark. Both Denes and Matta-Clark carried out grand-scale performances that addressed the friction between the forward march of capitalism and the ghosts that it left behind (or that remained invisible). Matta-Clark’s ‘Days End’ (1975) shows the artist, blow torch in hand, slicing out a massive half-moon from the wall of an abandoned industrial building at Pier 52 along the Hudson River in New York. With his incision, Matta-Clark transformed the detritus of industry, symbolically reclaiming it for those in the city who were enduring the first visible socio-economic consequences of deindustrialization. A few miles south of Pier 52, at the tip of Manhattan, Denes carried out ‘Wheatfield: A Confrontation’ (1982), for which she planted a field of wheat in a former landfill, directly below Wall Street. With the Twin Towers looming in the background and the spectacular gold of the swaying wheat in the foreground, ‘Wheatfield’ brought the material (vital resources unevenly distributed across the globe) in direct spatial dialogue with the abstract (finance capitalism). 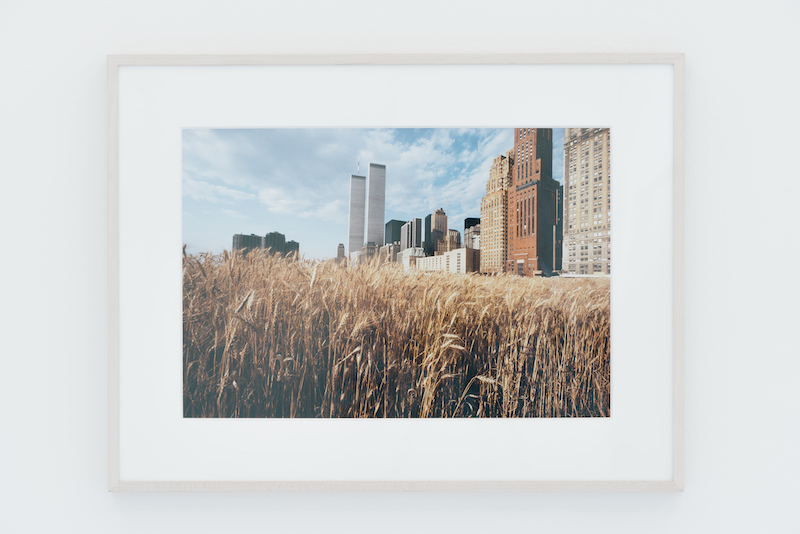 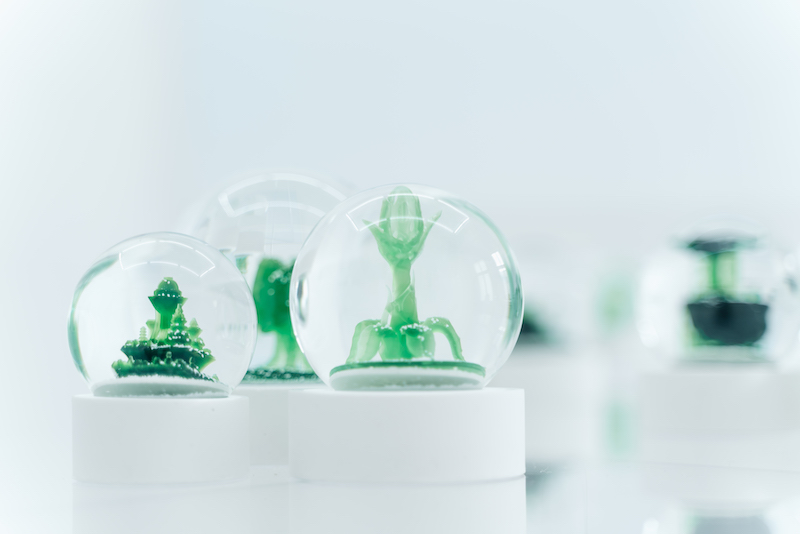 Works by Kévin Blinderman, Nada Saeedi and Yalda Afsah probe the dark heart of humankind’s attraction/repulsion to the very things that endanger its existence. Blinderman’s work, ‘X’ (2018) mines the appeal of the dangerous by creating objects—outdoor heaters fashioned from two opposing wood beams that form an X—that are as enticing for their warmth as they are toxic for the carbon dioxide they emit. Saeedi’s ‘Parasitoid Cell of Desirable Future’ (2019-ongoing) is part of a larger body of work that explores various forms of virtual gardening represented by games like Minecraft. ‘Parasitoid’ features dozens of snow globes populated with green figurines in various, amorphous shapes. At once forlorn and enchanting, they seem to be hybrid forms of vegetal/human life that have been trapped, contained and collected by a more powerful species or predator, a colonial fantasy with consequences for the condemned. Filmed on a river in southern France, Afsah’s video ‘Vidourle’ (2018) captures crowds of mostly working-class young men during a ritual known as “toro-piscine,” a sort of riverside, common man’s bullfight. The young men in baseball caps—some bare-chested, some in sports jerseys—stand, nearly waist-deep, excited and tense, looking in the direction of the bull that the viewer never sees and that the young men both hope and fear will charge. ‘Vidourle’ makes for uncomfortable viewing, positioning us as an uninvited voyeur and increasing the tension between the young men and the bull that, like the coming global catastrophe, is at-once invisible but anticipated. 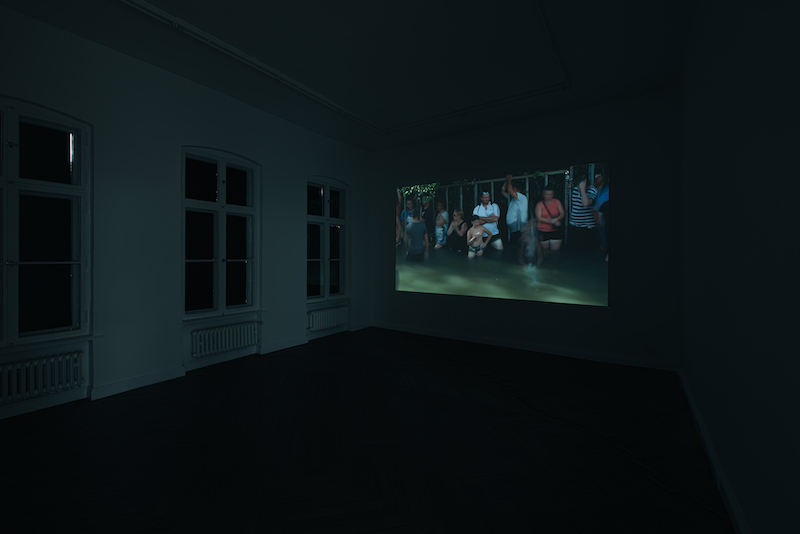 ‘A Year Without the Southern Sun’ makes a persuasive case. We cannot disentangle climate change from (de)colonization; they are two sides of the same coin. But where does this insight leave us? ‘Vidourle’ offers a hint at a possible answer. If we turn our attention to the audio, we notice that it’s not the human but the non-human that dominates the soundtrack. Instead of the cacophony of the crowd, we hear the burbling and gurgling of the water intermingled with the chirping and croaking of an invisible chorus of cicadas and frogs. This quiet symphony is a gentle reminder that it’s the non-human that preceded our current geologic era and that will survive, in some form, long past the dusk of the age of the Anthropocene.