It’s a story I’ve heard several times now: a friend does a road trip in America and remarks that, compared with previous visits, they noticed almost no insects splattering across their windshields out on the road. As a metric of ecological collapse, the road trip anecdote shouldn’t be overly prized, but more systematic studies offer a much more frightening, if less atmospheric, picture of the current predicament. The scientists Francisco Sanchez-Bayo and Kris A.G. Wyckhuys published an article in 2019 in the journal ‘Biological Conservation’ that found 40% of the world’s insect species are threatened with extinction. 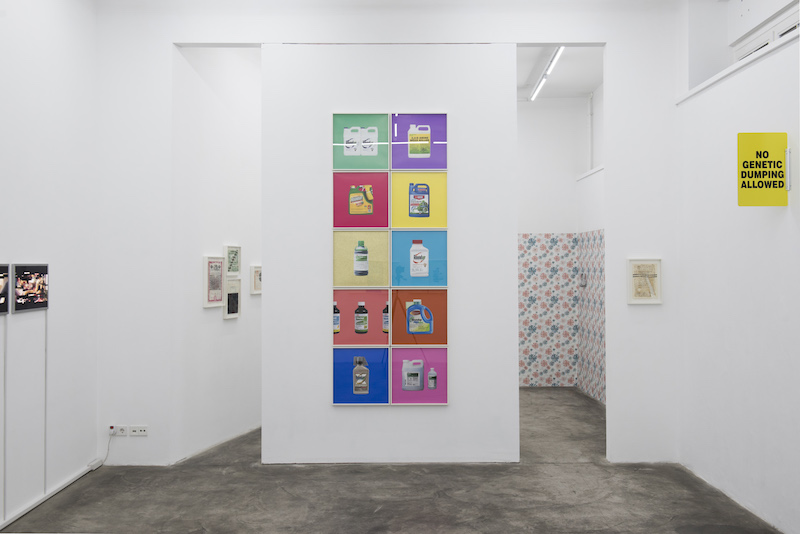 The conversion of land for use by agribusiness is the prime culprit (along with urbanisation) that is cited by Sanchez-Bayo and Wyckhuys in this incipient mass-extinction. Within the lifetime of most people living on Earth now, the scientists project insect populations could decline by half with potentially catastrophic consequences for biological systems and—gasp—even the agribusinesses that make their money exploiting them. The second leading driver of this act of ecocide, the scientists note, is “pollution, mainly that by synthetic pesticides and fertilisers.” “Pesticides”: the name itself is deeply, politically freighted. “Insecticides” slowly morphed into “pesticides” as understandings of the natural world became increasingly instrumentalist in an era of global free trade agreements. We have come a long, long way in the decades since the 1972 abolition in the United States of the industrial insecticide known by the acronym DDT. Crucial to this ban was the publication of Rachel Carson’s paradigm-shifting book, ‘Silent Spring.’ A quotation from Carson’s book appears at the top of the press release for Kirsten Stolle’s exhibition ‘Pesticide Pop’ at NOME.

“No witchcraft, no enemy action had silenced the rebirth of new life in this stricken world. The people had done it themselves,” is the passage Stolle selects to set the tone for a show that is leavened with a certain gallows humour, but which smoulders with indignation at the arrogant machinations of global chemical conglomerates as they work to forestall legal and political redress against their extractive prerogatives. 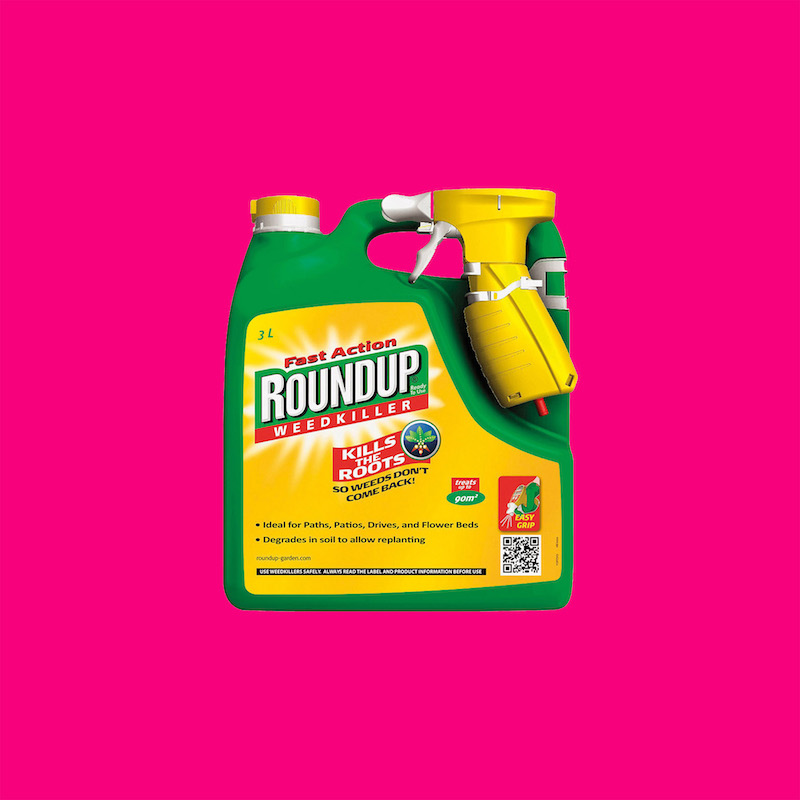 Central to the exhibition are two serial works, one of which is entitled ‘No Risk to Public Health,’ taking its title from a quotation from Alexandra Dunn, an Assistant Administrator in the Office of Chemical Safety and Pollution Prevention in the American Environmental Protection Agency. “There is no risk to public health from the application of glyphosphate,” the honourable Ms. Dunn states, and her assurance is trumpeted in a full page advert in the New York Times placed by the drug overlords at the German chemical megalodon Bayer (parent company of Monsanto, manufacturer of the glyphosphate-based herbicide Roundup). Stolle presents several versions of the advert, one with sections of blacked-out text leaving a kind of détourned, refrigerator-poetry that ends with the assertion “glyphosphate is not carcinogenic.”

Other iterations include a hand-annotated version of the advert, and one in which all the words in the article are cut out and arranged into an overloaded word cloud against a blue background. Some iterations in the series are more aesthetically convincing than others, but Stolle’s outrage burns to clarity throughout. Stolle’s ‘It’s time’ is a series of light-boxes featuring images from Monsanto television adverts overlain with text and other artistic interventions. Aspirational folks appear at garden parties and cafes interspersed by swatches of black pigment, which Stolle refers to as “glitches.” The text that appears is derived from the adverts’ scripts but repurposed by the artist to ominous effect. The handsome chap enjoying the summer weather in one is overlain with text that reads “We’re the food.” An impassive teen pokes his head around a doorframe in another behind the words “It’s done.” 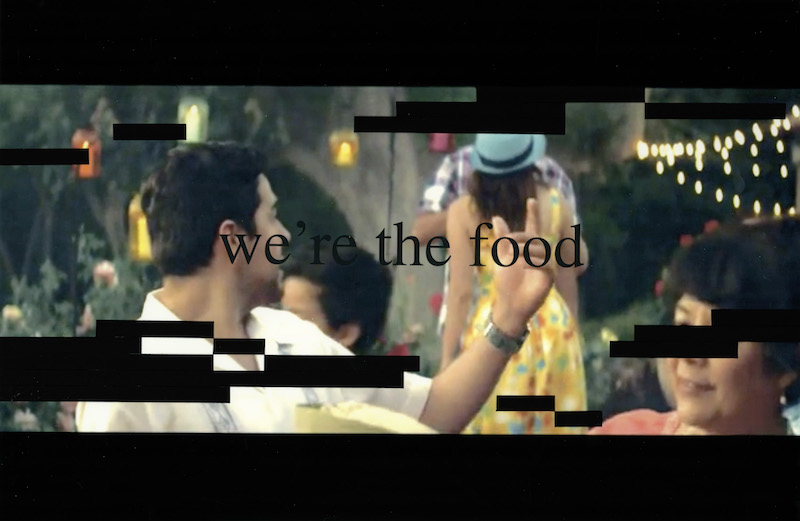 Subtlety and polemics make awkward bedfellows, of course, but the challenge in making art about a subject as intensely urgent as the wastage of the natural world by omnipotent global corporations is to strike a balance between clarity and didacticism. At times, Stolle is very successful, as in sections of the aforementioned series, perhaps less so in the case of works like ‘Revolutionary Control Corner.’ This work is something of an installation, a corner of NOME’s wall is plastered with modified wallpaper featuring a flowery pattern with petals radiating out from images of containers of various agrochemicals. At the centre of the work is a sound piece on headphones, in which the listener hears the stentorian tones of a mid-20th-century narrator apparently extolling the virtues of advances in agri-chemistry, but with the self-consciously choppy editing of Stolle, the sound file is manipulated to produce a jaunty totalitarian ukase about “controlling the American farmer.” It’s clever, but somehow too knowing to bear the weight of its own intention. 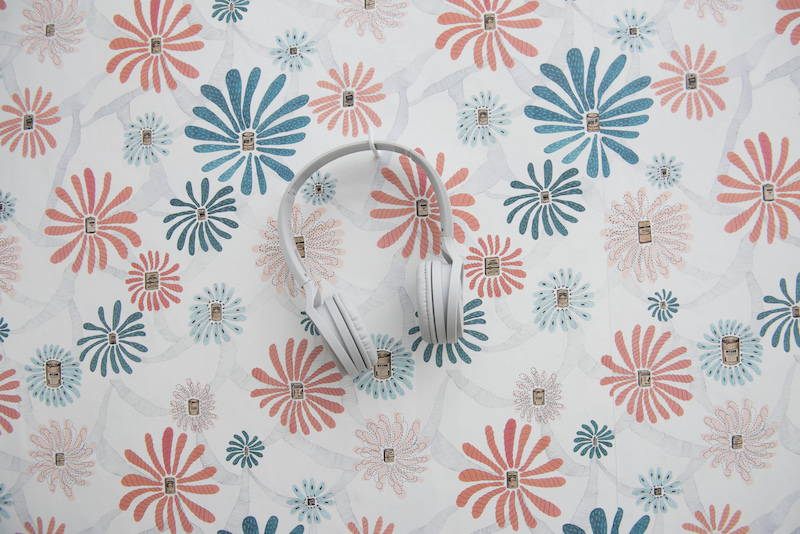 Stolle’s works are at their best when they allow the viewer to fill in the blanks, sometimes this is the case literally as with the artist’s ‘Bayer Monsanto Scramble!’ – a word search game in which the player can look for related terms including “superweeds,” “corn,” “biotechnology” and “auschwitz” (sic). It probably won’t provide hours of fun for the whole family, but it does tread the fault line of satire and sloganeering in a much more surefooted way than other works. With ‘Pesticide Pop,’ Stolle is foregrounding a discussion that is epochal in its implications; she treats the human consequences of pollution with crystalline lucidity, and the implications of the use of glyphosphate-type chemicals for insect populations become obvious as well. However, they are only the tip of an iceberg as terrifying as anything Kate Winslet and Leonardo DiCaprio encountered on their doomed voyage in the North Atlantic. Indeed, the significance of Roundup herbicide in other areas of agricultural malpractice – particularly in the development of genetically modified “Roundup-Ready” crops, essentially “single use” seeds—could prove even more devastating over the intermediate arc of mass extinction events. Perhaps as a function of its directness, Stolle’s exhibition offers a stark reminder that in the main, the primary message of interspecies contact between humans and the rest of biological life continues to be a resounding “fuck you.” 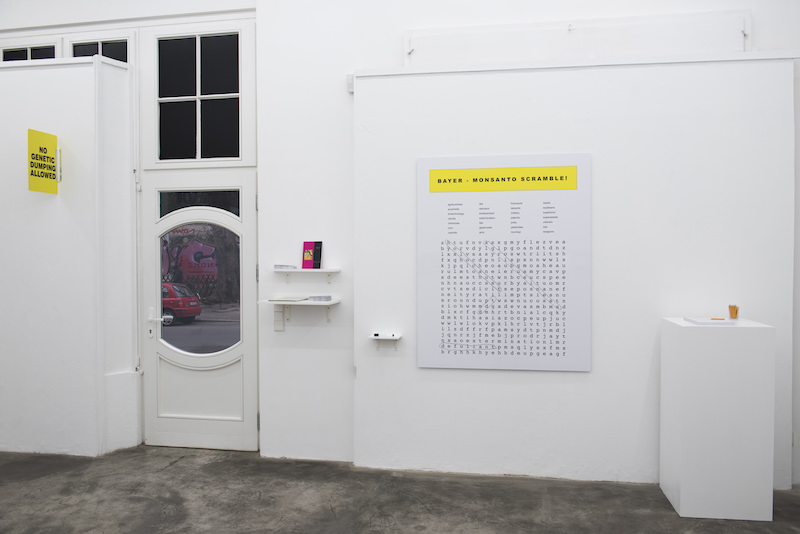