Jorinde Voigt’s delicate brass mobile ‘Contemplation 10’, circling in the staircase of König Galerie, is a mere preview of what the exhibition achieves. The sculpture, painterly in its lines, is elegant, sinuous and minute, an example of the fine work that goes into all of Voigt’s output. The artist constructs her own quasi-architectural and unquestionably systematic graphic language based on pre-existing systems. From the Fibonacci sequence to the torus and phenomenology, her work at first seems highly impenetrable but, like any language, it follows a logic that can be decoded. 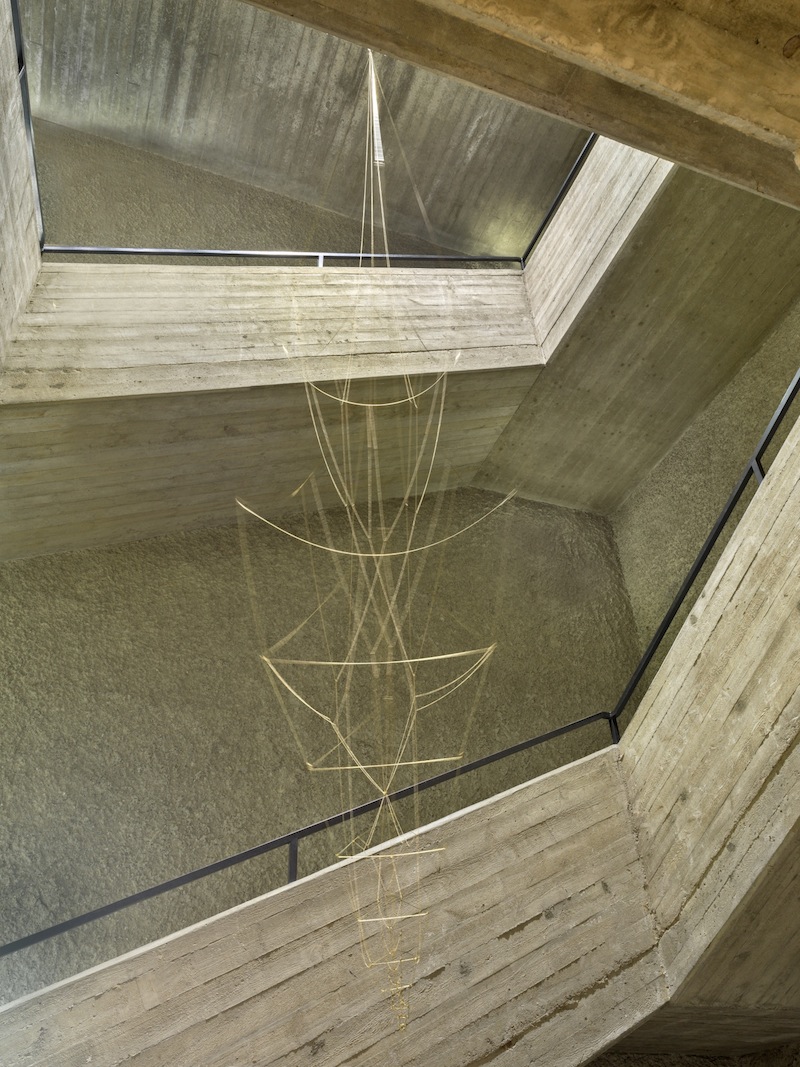 König’s nave is almost minimalistic for this exhibition. Along the floor, before the small elevation that separates the space, are some unostentatious golden sculptures, ‘Integral/Doppelkegel’, standing before the warm tones of the series ‘Immersive Integral/ Rainbow Series/ The Match I-VI.’ The sculptural elements almost seem to emanate from the drawings. Beyond the elevation stand two impressive series on either side of the room. Their sheer scale and entrancing patterns of blue and gold are almost meditative. Voigt’s mobile series hang along the farthest end of the space. Behind them is a smaller-scale series—’Immersion XI (1)-(8)’—which rounds off the exhibition neatly with its darker tones and mysterious aura. 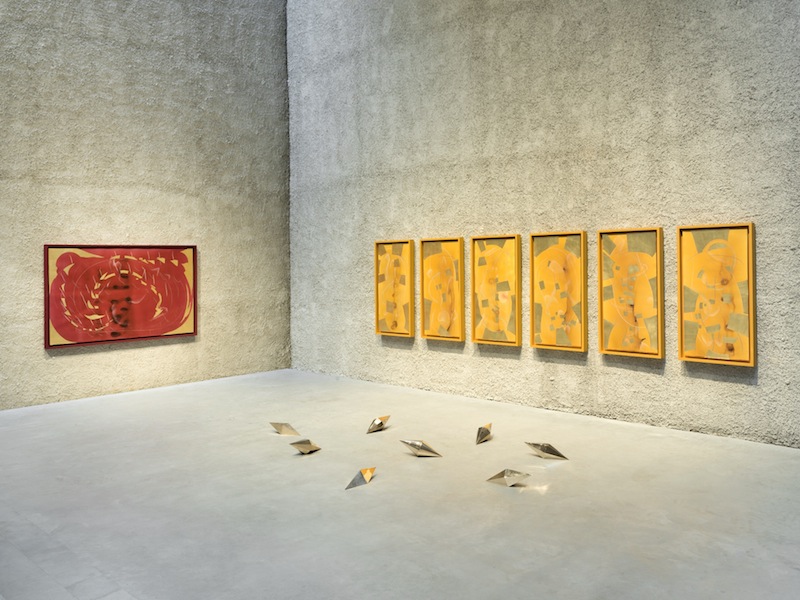 The Fibonacci sequence has long been associated with the arts, especially when it comes to the analysis and creation of compositions. The equation and its logic are simple: in essence, each number is the sum of the two preceding ones (1, 1, 2, 3, 5, 8, 13). Geometrically, this can be translated into the Fibonacci snail, or shell-like, spiral. You may be familiar with this mathematical equation before seeing this show, because all of Voigt’s mobiles from the series ‘Contemplation’ seem to follow its logic.

It is as if they double themselves within their own structure and in the overarching network they form. This sense of existing in tandem is something that all of Voigt’s oeuvre achieves. There is a constant interplay between the invisible and the visible, inside and out. The works exist within themselves and in relationship to others as if they are in a constant dialectic with each other. However, simultaneously, they also enter into a dialogue with the viewer and the exterior. Those who see the work attempt to “read” it, they perceive it, an act which objectively alters the work and differs from person to person. 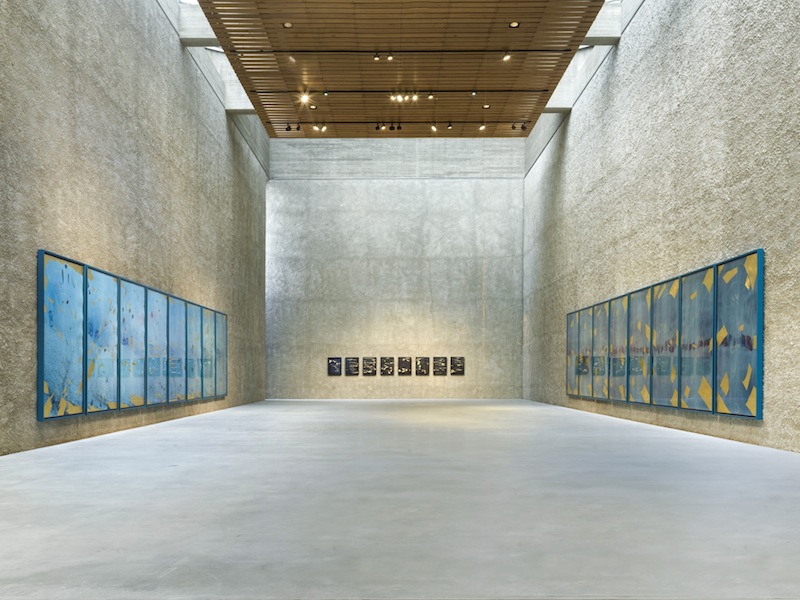 Voigt’s large-scale compositions seem to deepen ideas of openness and expansion as they’re related to geometry and phenomenology. The torus, a donut-like geometrical shape, serves as a basis for them. With no beginning or end, inside or outside, it is the perfect structure to explore issues of perception, which confound the lines between interior and exterior, creating a sole “I” made of both. In other words, though the individual is in constant relation to society they also develop a rich interiority that alters their perception.

The abstract shapes for Voigt’s compositions seem to fall into three different forms: geometrical, particularly the cylindrical structures that seem related to the torus; organic shapes, which almost appear to be different body parts in motion; and abstract lines and volumes, which appear almost like connectors between different compositions. This is the case with ‘Immersive Integral/Universal Splash I-VIII’. The meandering yet logical lines establish an immediate relation between the drawings as if each is not divided by separating frames. There seems to be a logic to how each of the other elements shifts from frame to frame, each progressing fluidly, almost as if looking at one of Edvard Muybridge’s motion sequences. 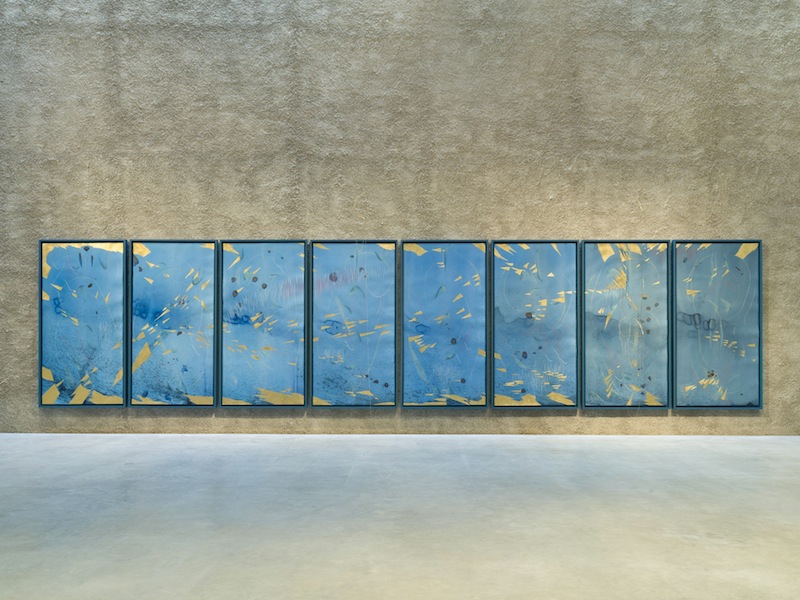 It is not the easiest work to decipher or grasp but, with each viewing, it becomes more and more accessible. Voigt’s emphasis on phenomenology also makes the exercise of observation an individual one. Her compositions offer the possibility of multiple readings, just as perception is understood as construed through one’s internal and external environmental influences. Though this may be true, it is also clear that Voigt continues to develop her language and system and it is one we should all become fluent in. The works presented at König Galerie will convince you of this.