Exceptionally detailed, minuscule rainforest lichen, soft fuzzy moss and extraterrestrial orchid forms inhabit the hyper-real world of Richard Mosse’s latest body of work ‘Ultra.’ The distinctions between plant and animal are blurred, and the natural world as we know it is rendered in a whole new light. On view (by appointment) at carlier | gebauer, these large-scale yet intimate photographic portraits of an endangered rainforest biome mark a departure from Mosse’s oeuvre, while following his method of utilising unconventional photographic techniques. Mosse has employed ultraviolet light technology to bring us into a realm that is both of-this-world and starkly different from how we currently know it, in order to observe landscapes and our interdependent relation to them. 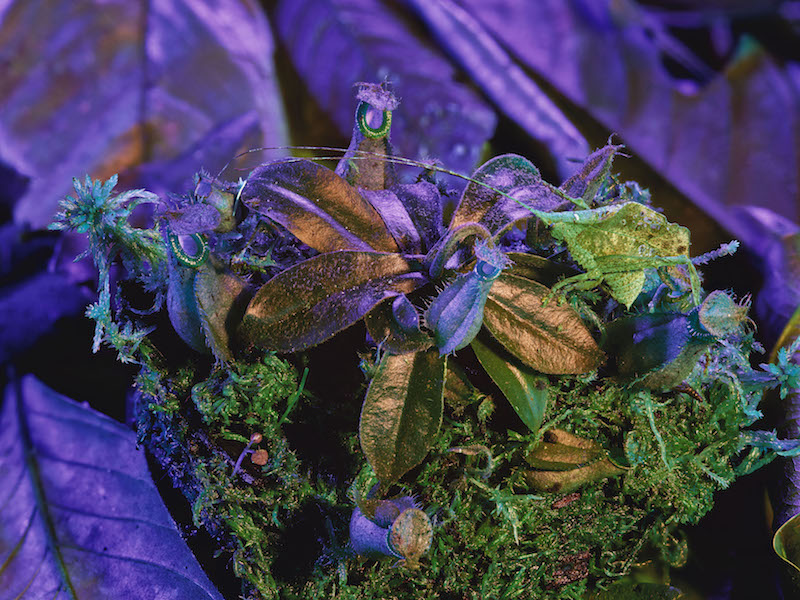 Mosse’s practice has always held a close affinity to photojournalism, reportage and documentary forms. His interest in engaging with history in real-time, as it unfolds, has led him to document injustices and atrocities that are often under-represented by global media. Perhaps best known for his heart-rending series of the war-torn Democratic Republic of Congo, where human displacement is at the fore and the green vegetal world appears in shades of crimson and hot pink. Drawn to Kodak’s now-obsolete Aerochrome film for its ethereal qualities, Mosse attempts to turn military technology back on itself. Originally invented during World War II, in collaboration with the military, this unique film was used to undermine enemy camouflage techniques: rather than blending in with the natural landscape, their khaki uniforms are rendered a vivid pink. Moss has found critical acclaim for his employment of unconventional photographic techniques, which he manoeuvres to reveal the intricacies of human-made disaster. 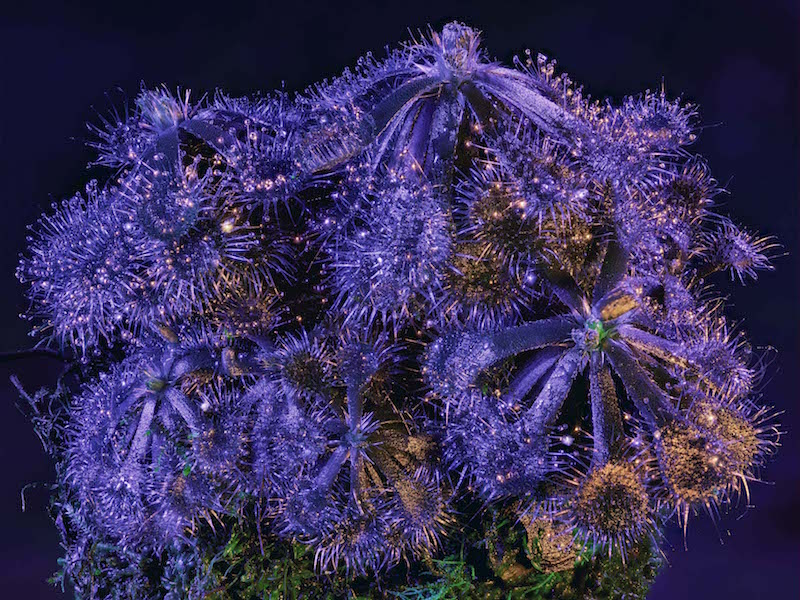 In keeping with the distinct trajectory that Mosse has forged as a conflict photographer, in an age of ecological crisis it seems fitting that he has turned his lens to an entirely different subject matter, albeit one with a quieter sense of violence: the slow but steady death of a rainforest ecosystem. For this new body of work, Mosse spent numerous nights wandering through the forest landscape, UV torch in hand, in order to capture the ultraviolet fluorescence of these fragile habitats. Composed from numerous separate images of typically fifty or more frames, the resulting works are brought together by the use of this borrowed scientific photographic technology, which makes visible what is ordinarily invisible to the human eye. 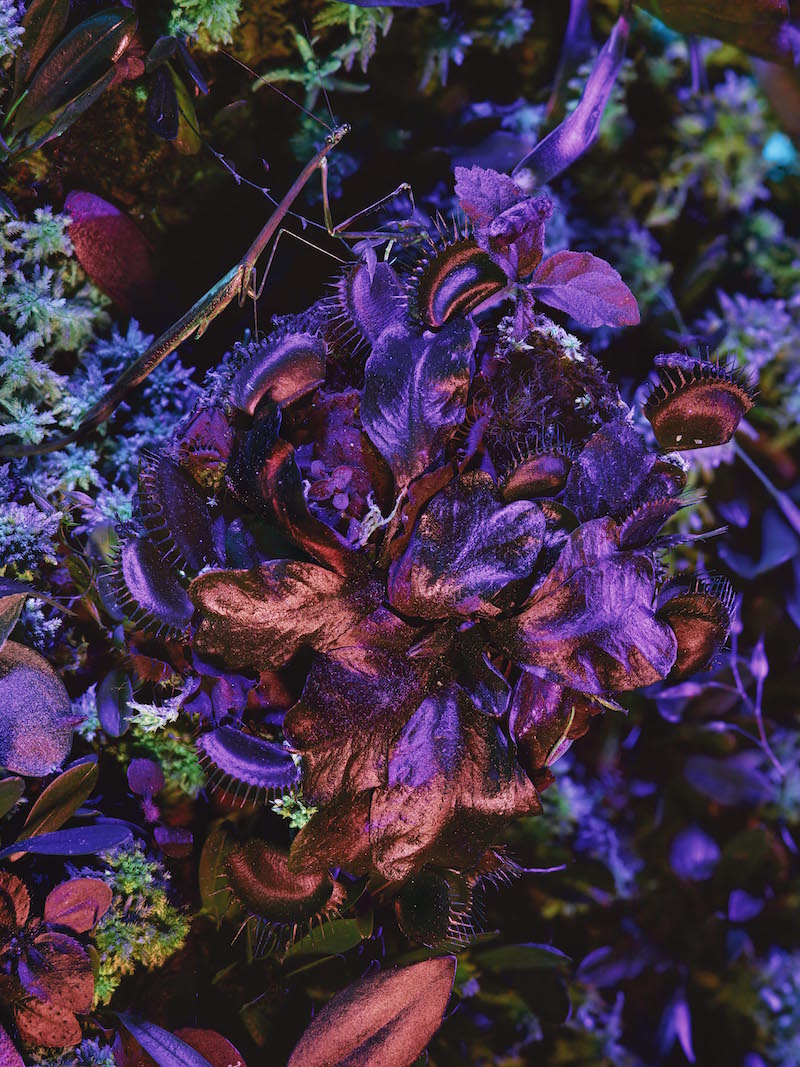 Would-be fragile flower petals take on a stiff metallic quality under this spectrum, as the deep violet is speckled with a striking gold, hardening any softness to the image and making the subject glow in a strikingly artificial way. In this sense, the works are disorienting, diverging from the confines of conventional nature documentary. This unnerving visual effect serves to confuse the viewer. We don’t know if we’re looking at plant, vegetable or mineral as insects seamlessly blend into bark and the more vicious of the plant world—a venus fly-trap—truly looks like something from outer-space. As the boundaries between plant and animal become increasingly difficult to differentiate, there is the suggestion that something is askew in our precarious symbiosis.

The hot pinks and crimsons of Mosse’s infrared works are replaced with a much darker palette in ‘Ultra,’ although one that is equally alluring. The uncanny manipulation of the forest floor culminates in images that are too-perfect, too-sickly coloured and reminiscent of a highly artificial, synthetic world. The scale at which these once-verdant forms appear aggrandises what is often taken for granted. The micro and macro are subverted in such a way that we could either be viewing alien counterparts of current taxonomies, or mutated microorganisms that have been expanded under a microscopic lens. 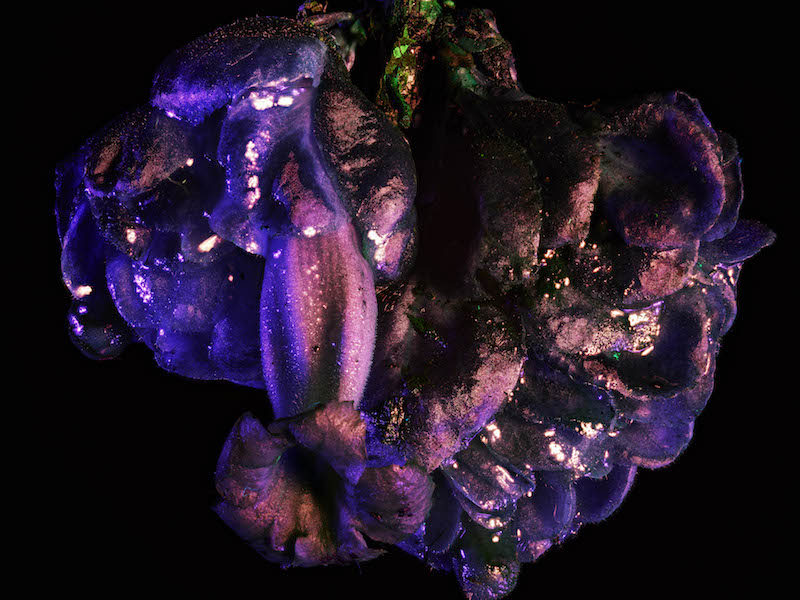 While Mosse aims to bring us closer to his subject to reveal anthropic injustices, the defamiliarising and distancing of these natural forms often has a counter-effect. On the one hand, we are drawn to the brightly saturated hues of these estranged landscapes that immediately seduce us, although they depict scenes of grim devastation. Whether they are groups of already marginalised people, or the minutiae of rainforest flora and fauna in peril, Mosse’s subjects are increasingly othered by the employment of these alienating techniques. Rather than the desired effect of turning specialised technologies back on themselves, his work more effectively delineates the power imbalances that exist between citizens globally, between us and the natural world, as we become uncomfortably aware of our own complicity in these atrocities.

‘Ultra’ serves as a reminder of the complete interdependency between humans and the worlds we so often try to distance ourselves from. In this sense, Mosse’s shift from anthropomorphic landscapes to the alien underworld of a rainforest biome follows a thread of interconnectedness, whether in conflict or harmony. Through these surreal terrestrial scenes we are reminded that we cannot be extricated from the world around us, no matter how distant these landscapes may appear.