Michael Wang unearths the intertwined roots of plant, animal and human histories. Working between his upstate New York studio and his Governors Island residency, Wang traces the trajectories of species around the globe. The artist makes pilgrimages to sites where species were known to appear, though his work ultimately reveals as much about their absence as their former inhabitance. Wang’s artworks interrogate and intervene in invisible systems of care and capital in relation to the Anthropocene, a measurement of time that accounts for human-driven changes on Earth. 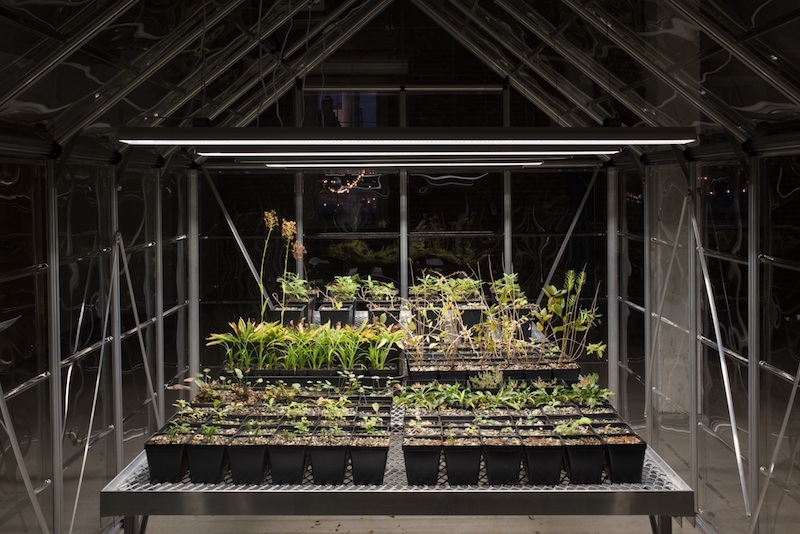 For the last five years, a keystone of Wang’s practice has been ‘Extinct in the Wild,’ a project that exhibits “homeless species” that have not been seen in nature for over 15 years but survive under human care and cultivation. Wang has exhibited these flora and fauna in institutions such as Milan’s Fondazione Prada, where he engaged with the institution’s conservation system to reframe museum personnel as caregivers. In 2019, Wang developed ‘Extinct in New York,’ a collaboration between the Swiss Institute and Lower Manhattan Cultural Council on Governors Island, a 172-acre island in New York Harbor. The exhibition examined the urban city as a catastrophic circuit, from hunting and harvesting to the erection and eradication of infrastructure.

Wang’s work is impeccably researched and highly educational, though never dogmatic. He articulates his curiosities through succinct examples that unravel complex systems. Wang’s practice reveals more than just climate change; it frames human history through the lens of symbiosis, networks of interspecies interactions. I spoke with Wang about the natural life of urban systems and the global relationships that lay the groundwork for our current state of affairs, before COVID-19 made us ever-more conscious of the interspecies exchange circuits in which we live. 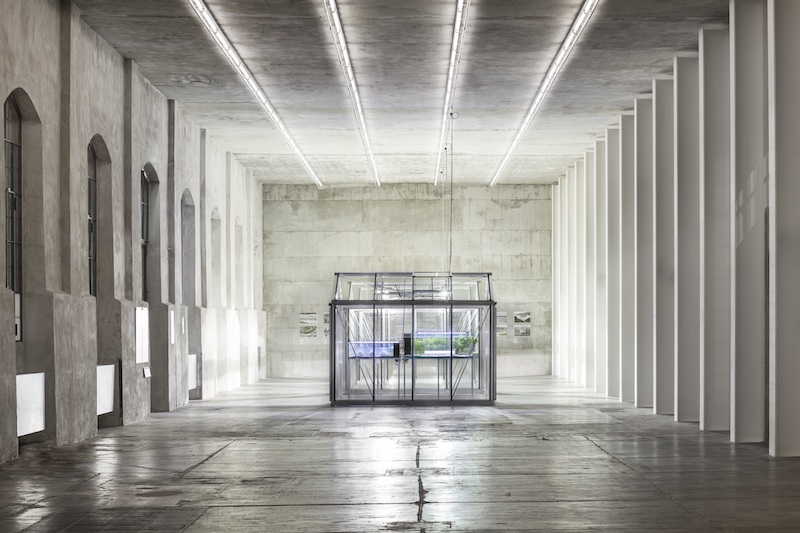 Jack Radley: Let’s talk about the origins of your ongoing project ‘Extinct in the Wild.’

Michael Wang: I was drawn to the conservation category of species that are extinct in nature but exist in captivity or cultivation. Mainstream extinction stories are about victims of human actions or humans heroically saving the last of a species. One part of this project is that I go on pilgrimages to the last locations where a species was seen, in what is considered a natural or wild environment. Then I document those same species in cultivation or captivity, pairing two images that capture their stories.

But I’m documenting an absence in a way. Sometimes when I go to these sites, it’s very clear that the landscape has changed in a lot of ways. When I went to Tizi n’Tichka in Morocco, the last location where the Atlas lion was known to be shot, in 1942, now there’s this huge highway that cuts through that pass. It’s clearly being modernized right now; you can see a lot of human hand in that environment. Other times, the environment looks very “wild.” 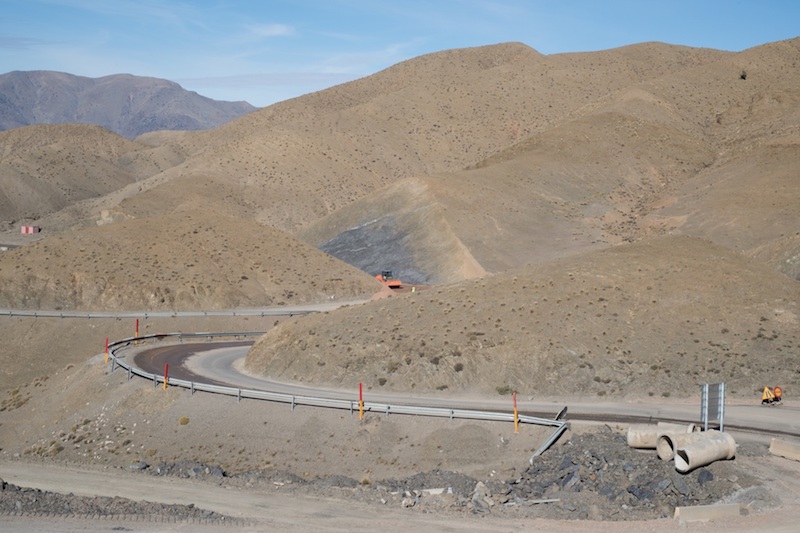 JR: Is there a reason why your work focuses more on the interspecies relationships between humans and plants, as opposed to that of humans and animals?

MW: I think plants are sometimes more overlooked compared to animals. It’s complicated but there’s also always an ethical dimension of determining what is at risk when bringing something to the exhibition space. I think, for me, the risk is greater when it’s an animal than when it’s a plant. The care required to give a just, comfortable environment to thrive is typically a lot higher for an animal than it is for a plant.

JR: A zoo is more difficult to recreate, ethically, than a greenhouse.

MW: Right. The exhibition at Fondazione Prada actually contained two animal species: the aquatic axolotl and the red-tailed black shark. I partly included them because they’re really common in captivity; they’re kept as pets. I was really lucky that Prada had just had this Damien Hirst piece that was full of fish, on view for over a year, so they had an aquarium specialist on staff—his job was to make sure all the Damien Hirst fish didn’t die. In a way it was exactly what I was thinking about: expanding expertise to maintain artworks. So I was able to use him to care for these two aquatic species; it was kind of perfect.

Alongside this idea of artwork conservation, I’ve been thinking about the idea of curation and its root being in “cura” meaning care. How can you extend care in the process of curation, beyond manuscripts or artworks, to these living organisms? My process is very systemic. I see a lot of my work in the tradition of systems aesthetics, but often I’m looking at the same time at the artworld as a system to find a point of overlap with these traditionally external systems.

I’ve been thinking about the expanding skills required by conservation departments in museums that collect contemporary art, as media expands. Then I imagined what would happen if rare species were collected by one of these institutions and their conservation department had to preserve the lineage of a species. A fantasy of merging these two kinds of conservation. 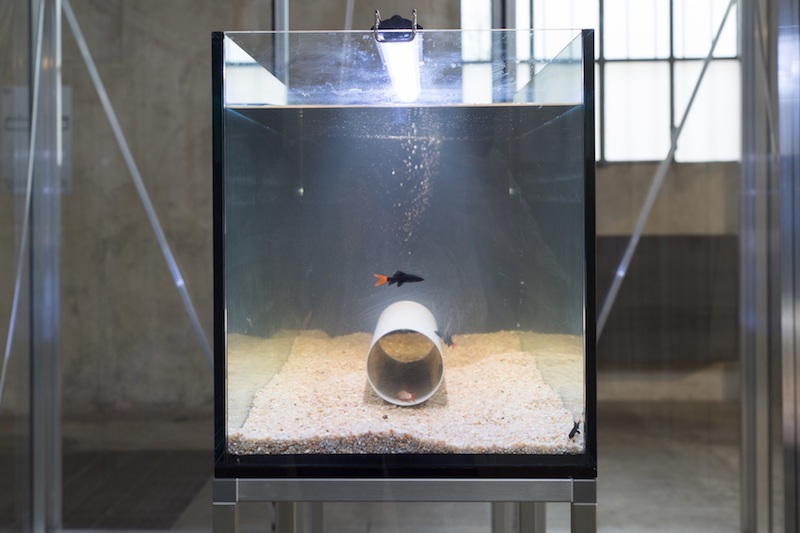 JR: How do you typically work with these museum caregivers?

MW: I’ll often train gallery staff to take care of these species. There’s a performative aspect: you’re feeding species and watering the plants in the show during exhibition hours, so it’s all on display. To me the whole work is about showcasing these institutions of care, but bringing them into the space of art where they achieve this other kind of visibility.

I thought of the readymade: you move something from mass culture into high culture. For me, with ‘Extinct in the Wild,’ it’s sort of this double-displacement: something has moved from nature into all these spheres of culture—horticulture, scientific research, or even the commercial pet trade—and then from those spheres, I’ve displaced it again. It’s important for me to think of these things not as nature, but as cultural artifacts because they only exist within human culture now. That’s what makes them available for this artistic displacement.

JR: In a way your work challenges the Anthropocene, and in a way your work also enacts it. It shows the effects of humans making these species extinct in nature, while simultaneously displaying humans’ ability to maintain them.

MW: At first glance, ‘Extinct in the Wild’ feels very much like this is about capital-A Anthropocene, when the whole world is a human world. And some of it is, but some of it is much stranger than that. I was just in Mexico looking at a particular story of a kind of orchid called Laelia gouldiana. It has a really interesting story because no scientific or botanical description has ever located it in the wild, so it’s only known in cultivation. It’s called flor de muertos because it blooms around the Day of the Dead, and the flowers are often used to decorate altars. It probably has this millenia-old relationship to these practices, and that’s potentially what kind of saved the species from extinction: it likely was a naturally occurring hybrid thousands of years ago that was noticed by someone for its beautiful fuchsia flowers and then cloned, through traditional cultivation. In that sense, it’s something that’s altered and maintained by human beings, but many definitions of the Anthropocene would not include something that happened maybe 2,000 years in the past. 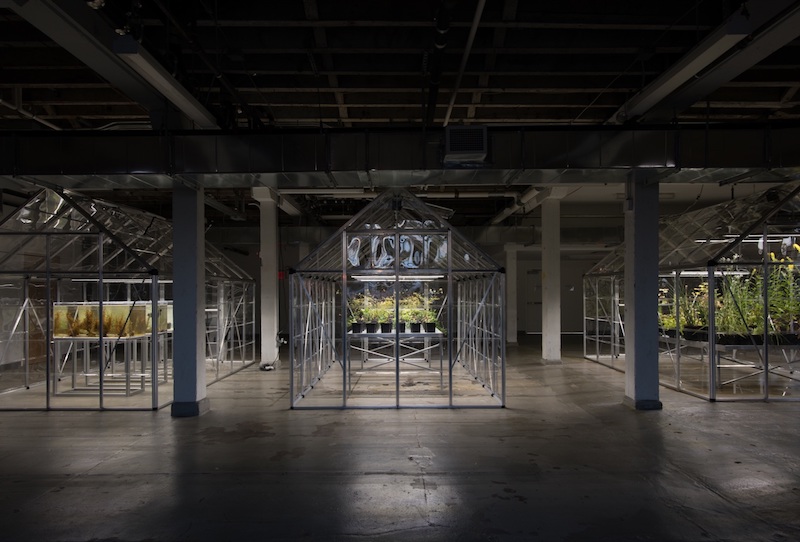 MW: Yes, when the Swiss Institute opened its new building, they wanted artists to design the more architectural elements of the building. They wanted to have a roof garden, and they knew about ‘Extinct in the Wild’ so they asked if there was a way to use this project to create a permanent roof garden. I selected four species that fall within this category that form the four sides of that garden.

JR: Does the Swiss Institute have these plants’ seeds in its archive, or do they only have the information and resources to get them?

MW: I’ve actually set them up with a grower who can provide them with those. It’s not necessarily a fixed set of resources but they should be able to find them. 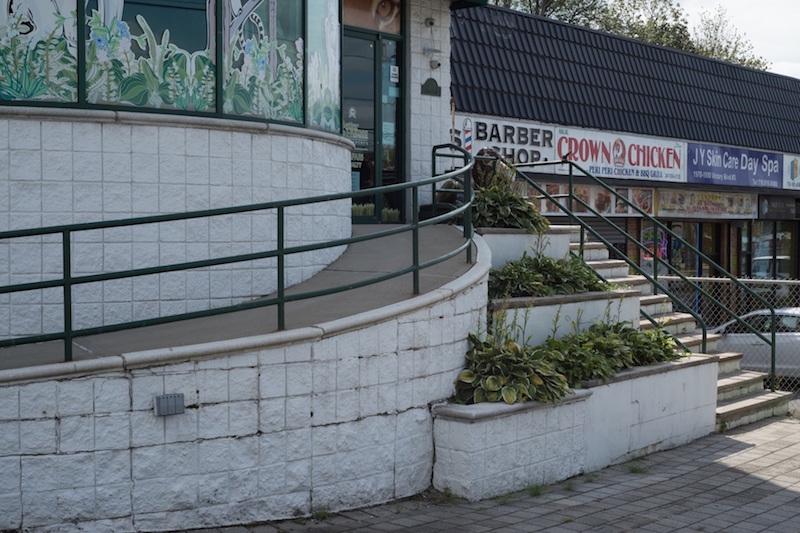 JR: The Swiss Institute also presented ‘Extinct in New York’ at Governors Island. Could you speak more about that project and what it reveals about the history of the city?

MW: I had been thinking for a while about looking at the effects of urbanization on the environment and the ecological relations that existed before the city. New York has a colonial history, it’s the history of capitalism and industry. This was a very different place before the arrival of Europeans. We must also understand that the great diversity of plant life in New York City was maintained in large part due to indigenous land practices. These land practices included selectively managing species in semi-wild environments or keeping certain areas open in a three-part agricultural system that actually increased the types of environments and biodiversity. The displacement of the Lenape disrupted the human relationships to those species. This is part of the violent history of New York. ‘Extinct in New York’ makes a small gesture of return—bringing back to the city those plant, algae and lichen species that are no longer found growing autonomously in any of the city’s five boroughs. But it’s not purely a joyful homecoming; rather they return on life-support, maintained, for the exhibition, in the sterile confines of greenhouses and under the glow of LEDs. 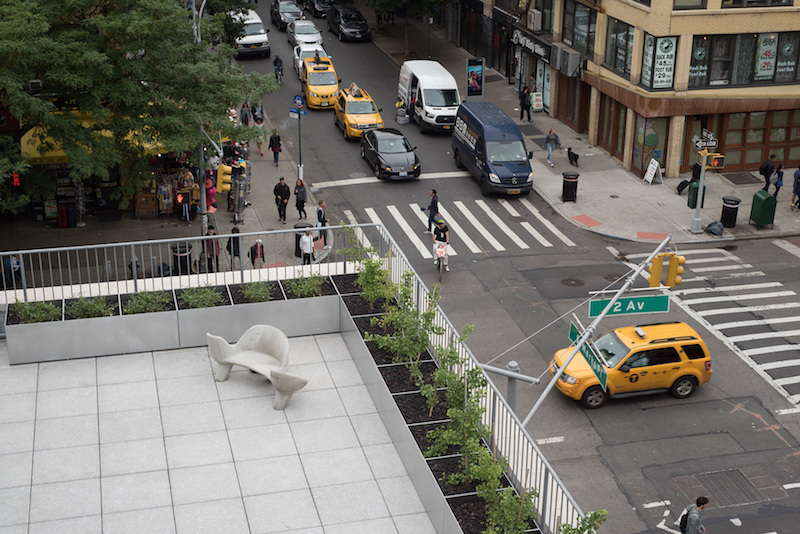