The current show presented online and at STATE Studio by artist Christian Fogarolli—winner of the Italian Council Prize, which supports the project—is titled ‘PNEUMA.’ The word refers to a quite capacious concept rooted in many cultures, which has been forged across different disciplines, from science to philosophy and religion. Indicating mind, breath, vital wind and, by extension, soul and poetry, pneuma is the intangible element traversing the artist’s latest research on the immateriality of mental illness. Over the past year he investigated, through archival research and collaborations with medical institutions and universities, the different ways science treats mental health in European countries, examining the sociological and philosophical ramifications and the role of art in this context. If, on the one hand, he involves—and collaborates with— science, on the other, he aims to diagnose its limits, imagining how a poetic approach could intervene where science vacates. Stemming from the effects of two important laws in Europe, ‘PNEUMA’ also indirectly inspects the political procedures that led to the estrangement of the patient as a person. 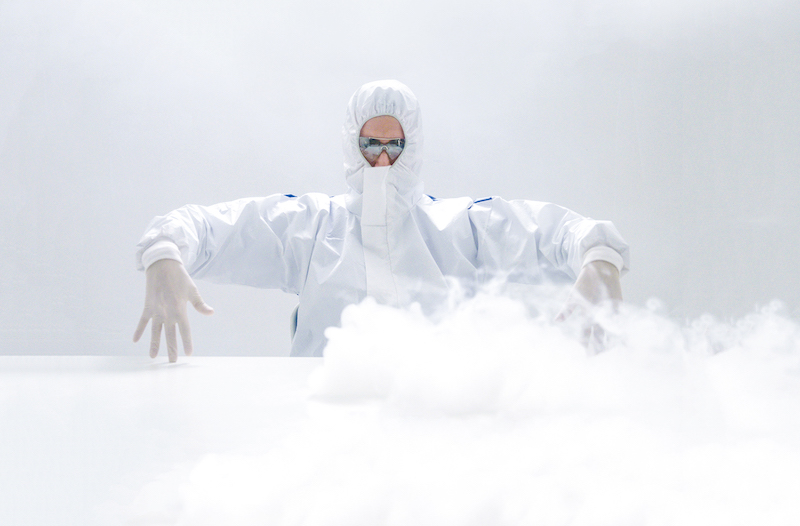 Lucia Longhi: The project originates from a study in ten different countries where you collaborated with brain research institutes, hospitals and universities, comparing different contexts both from anthropological and political perspectives. You established partnerships with psychiatric institutions as well as close relationships with the people who live and work there. Could you talk about these relational experiences: what did the collaboration with the researchers consist of? And what did your relation with the patients consist of?

Christian Fogarolli: The relationship with the countries involved in the project and the research have been very different from each other, this is mainly due to the differences on a political and social level. In some cases, it was possible to collaborate with the patients, with creative activities such as drawing, music composition, painting and sculpture. In other countries, these activities were not possible, especially where mental illness is still a sensitive issue and any external approach proves complex. The dialogue with the doctors contributed to my knowledge of the context and methods of treatment of the diseases. Finally, the researchers shared current scientific developments on the study of the relationship between mind and brain. 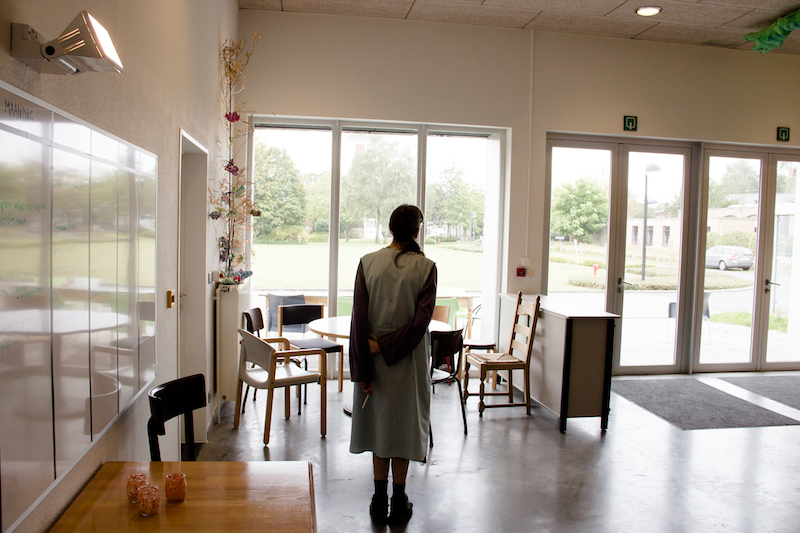 LL: The immersive set up at State Studio displays photographs, glass sculptures recalling human organs and a video piece where a scientist-like character handles mysterious laboratory tools. Can you tell something about the creative process: which experience or aspect of your research led you to the decision of translating your thoughts into these specific works: glass objects and a video?

CF: I consider these works as parts of a whole, a single comprehensive thought. The final creation originated from two paths. I was undoubtedly influenced by my research trips and the relationships with people. The study of historical sources on the human brain, by authors such as Galen, Gregor Reisch, Andreas Vesalius and Descartes certainly played an important role in the creative process. I analyzed schemes, literary descriptions and drawings, which are recalled in the installation’s shapes. The choice of glass represents an analogy with mental illness: we can say that both are intangible, although in different ways. Glass can’t be touched during processing; similarly, mental illness can’t be touched during treatment. Photography is employed here in a peculiar form, as it represents a magnetic resonance imaging (MRI) of my brain. Finally, the film functions as a junction between the different works: it shows live actions performed on some of the sculptures, yet maintaining its own narrative force. 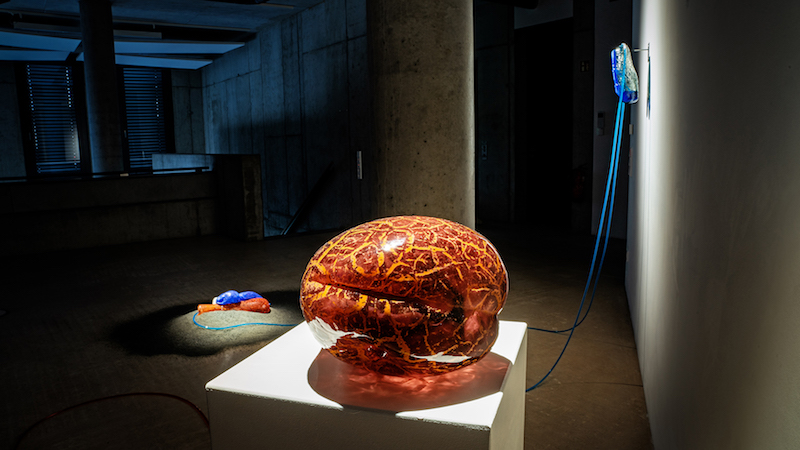 LL: You seem to speculate about the possibility of exploring questions on the functioning of the human mind by means of artistic practice and poetic approach. Your practice usually focuses on external reality, in its social, historical and scientific configurations. A lens that you turn outwards. But then, there is always a moment when you turn this lens inwards. ‘PNEUMA’ focuses on subjectivity, therefore you decided to examine yourself too. Can you tell us about the work ‘Artist’s Brain’ (2020) and why it is particularly emblematic of this project?

CF: I believe that art should first pass through the room of intimate introspection, before operating in society. The journey, the risk of discovering what is not understood yet implies adrenaline, anxiety, curiosity. Who determines the boundary between normality and deviance? Is it the same everywhere? Our brains, although anatomically similar, work in a profoundly different way. I have tried to understand mine, with an experiment that followed a dialogue on the concept of pneuma with Dr. Marco Catani (Professor of Neuroanatomy and Psychiatry at the Institute of Psychiatry, Psychology and Neuroscience at King’s College in London). After this meeting, I underwent a magnetic resonance imaging (MRI) in order to see the anatomical structure of my brain. With the collaboration of the CIMeC laboratory Center for Mind / Brain Sciences, Rovereto / Trento, we worked on this process, obtaining 2D/3D tractography images. Thus, it is possible to offer the public the opportunity to see not only the works, but also the brain of the person who produced them. This extraordinary technique is used in neuroscience to map white matter fibers for in vivo exploration of the anatomical connectivity of the human brain. However, today it is still impossible to read what travels within those fibers. 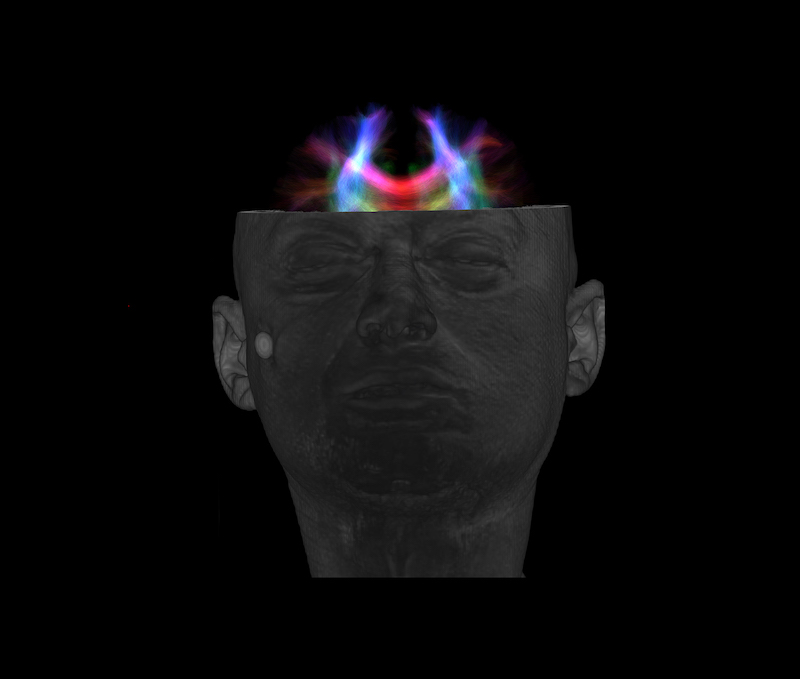 LL: The project opens up reflections on social exclusion and individual freedom. Recent studies have clearly demonstrated that isolation alters the structure of the brain, causing debilitating effects on mental health. However, social distancing and isolation often represented procedures adopted in the treatment of mental illness. In light of your very peculiar journey through mental health care, what are your thoughts regarding the distress caused by the coronavirus outbreak? And which effects of this global solitude do you address with your practice?

CF: Isolation is not a lost practice in the treatment of mental illness. It still exists, as well as many others. The issue is very complex, especially when forced social exclusion mixes with public safety issues. I believe this project is in connection with the current health crisis, not only because of the title—evocative of the respiratory system—but also because it deals with the psychic consequences caused by various aspects of this pandemic. The ‘Pneuma’ project made me think of two specific phenomena related to deviance: “The Flock effect” and “Hikkomori”. They are two similar but also opposite pathologies, deriving from the use of new technologies and the internet. In the first case, people unite coherently, but without any direct personal relationship, in a sort of collective anxiety. In the second case, we speak of “modern hermits”: it is a severe form of social withdrawal, a highly developed phenomenon in eastern regions (but now no longer limited to that part of the world). Individuals reject real society and prefer to live in complete isolation, relating to other individuals only through digital devices. 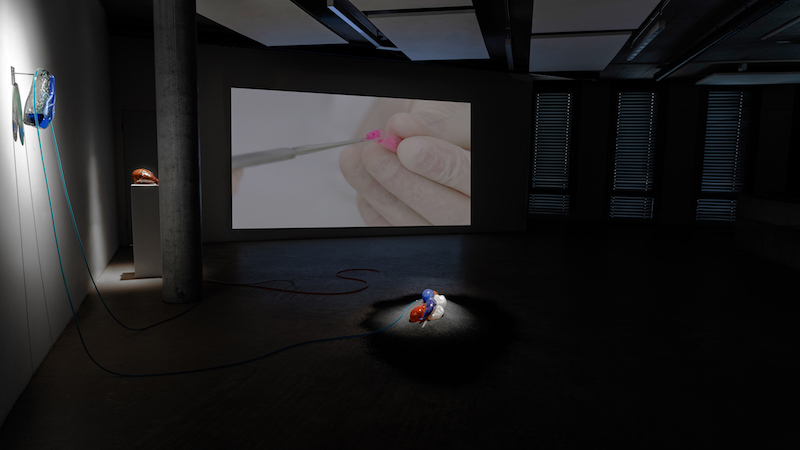