On the last day of April there is still a meter of snow on the ground, unusual even for Kirkenes, a small town on the northeast coast of Norway on the Barents See. Artist Inger Blix Kvammen grew up here and continues to live and work in a wooden house that transitions between studio, home, then back to studio again. Today a bouquet of fresh flowers and a bowl of red apples stand on the dining room table-cum-workspace. They are surrounded by nests of wires, tools and her signature metal neckpieces. The flowers, she tells me, are a gift she received on her birthday yesterday. She is still a little tired from the extended celebrations, which took on a special corona-virus-necessitated rhythm. The visitors were staggered over the course of the day and night, whose boundary is already disappearing into the glow of the midnight sun. The apples, on the other hand, reference another, earlier history. 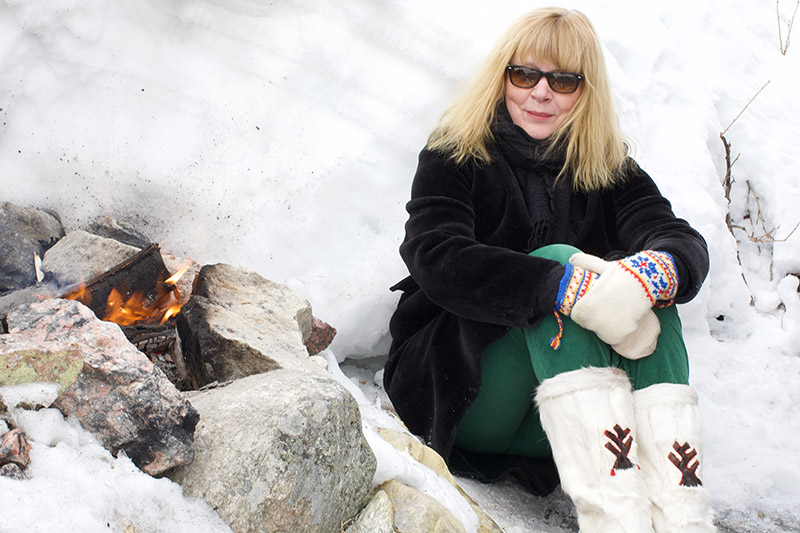 For Blix Kvammen, the smell of fresh apples is inextricably tied to the iron mine that has defined the life of Kirkenes since the mineral was first discovered there in 1906. “When I was a child, the mining company was something like a god up there on the hill,” she explains with a laugh. “They not only employed most of the population, but they would help beautify the town by painting the fences and they would gift boxes of apples to the families for Christmas. I still remember coming home from school to the smell of fresh apples. That’s how I knew the company workers had come by.”

This sentimental connection is a far cry from the gouged land and mountains of black rock left behind by mining operations, a sight that may be shocking to foreigners but for the people of Kirkenes and the province of Finnmark, they are a permanent fixture of home. That is not to say that mining is embraced with open arms. The far north is traditional Sámi territory and how the land is exploited must be negotiated with the Sámi government, whose parliament first opened in 1989. Because of disagreements, the mine was closed in the 1990s, later reopened and then closed again. This summer, notes Blix Kvammen, who is herself, Sámi, they were to reopen but the pandemic changed everyone’s plans. 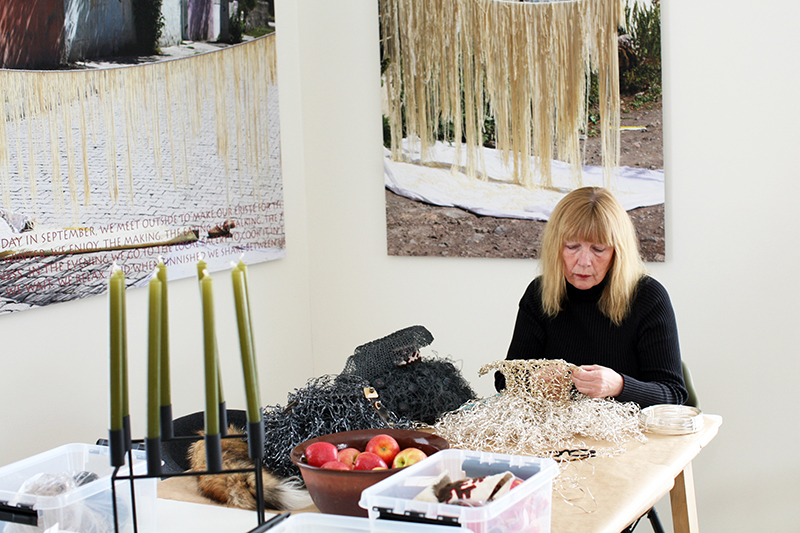 Blix Kvammen’s ambivalent relationship to the mine has left an indelible trace on her work. Though the gloomy black rock, which the artist even considers beautiful, might have influenced the gothic-like aesthetic of her ornate neckpieces, the intent behind them is in fact critical of resource extraction. Visually similar to iron, the filigree collars are made of oxidized silver. The artist intended them as what she calls “memory carriers” for particular women and histories.

Jewelry-making started as a way to modernize and preserve the textile techniques the artist learned from her mother and grandmother. Translating these skills into metal, she creates web-like clouds that spill across the collar bone of the wearer. Woven into the wiry strands are pieces of leather, fur and even portraits of indigenous women. By wearing jewelry, she explains, one tells the world what she feels is beautiful and important—a simple statement that reveals the particular relationship the artist, as someone who grew up in the arctic, has to beauty. Rather than advertising and the Eurocentric artistic tradition, her frame of reference is the land, the bodies of animals and the stories that are formed with each new generation. 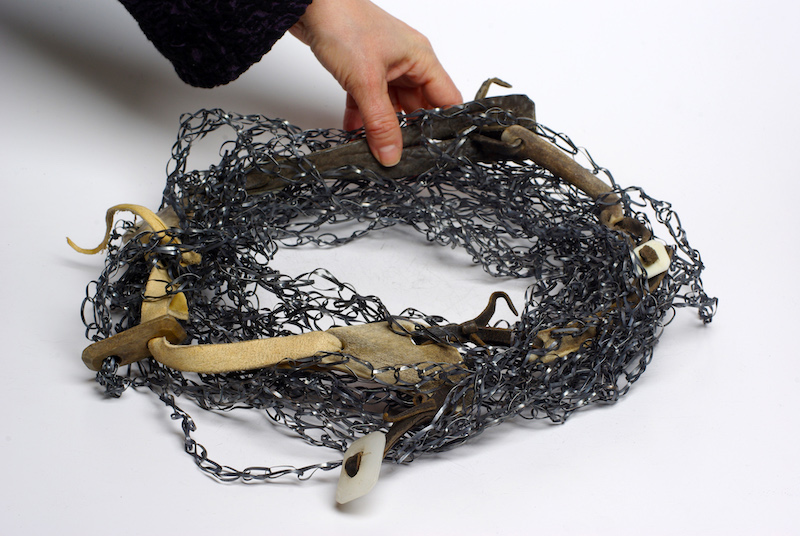 The northern borders, first officially inscribed in 1826, have divided its indigenous Sámi inhabitants across four countries: Norway, Finland, Sweden and Russia. Though the Sámi continue to organize internationally, they are nevertheless subject to the different rules of the countries they live in. Russia is, predictably, the least interested in recognizing indigenous rights, and when it does, it is usually an empty formality. Yet it is in some parts of Russia that indigenous traditions remain almost unchanged, which is why Blix Kvammen has repeatedly traveled there since 2008. In a seemingly contradictory development, explains the artist, Sámi reindeer herders have modernized in order to preserve their traditions in a changing world. Rather than strictly following the nomadic practices of the past, for example, they now travel to and follow their herds by snowmobile. This comfortable adaptation is simultaneously a painful compromise. It is also made possible by interrupted reindeer migration routes and a decrease in available grazing land due to resource development. Add global warming to the mix and the reindeer must survive on a poorer, more homogenous diet. Some speculate that this has had a long-term physiological impact on the animals: they have become smaller over time. 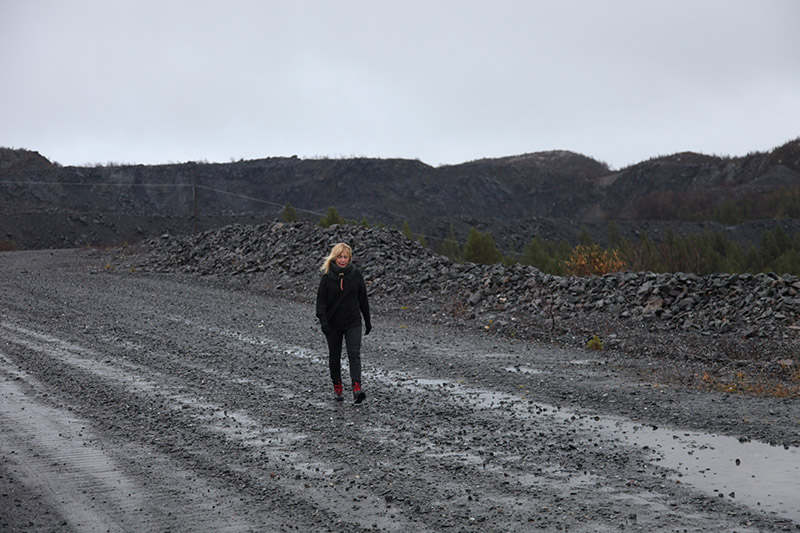 Russia’s vast expanses of undeveloped land stem from corruption and political disorganization rather than environmental awareness—something of a cursed blessing one could say. This has allowed the indigenous Nenets to live a traditional life in the tundra, where reindeer can travel as far as they need to graze. How much longer this will last, however, remains to be seen. By some estimates, the Arctic could have completely ice-free summers in the next 20 years. This is something China is banking on with its planned “polar silk road,” a system of railroads that is to make Kirkenes an international mega-port, thus facilitating further development of northern land. But if global warming and imperial greed weren’t already enough, today’s Nenet youth increasingly desire something other than a hard nomadic existence defined by the migration patterns of deer. This is especially true of young girls, whose mass exodus has caused a surplus of available bachelors on the northern plains.

The fragile balancing act between tradition and modernity lies at the center of Blix Kvammen’s ‘Tundra Archives.’ During her travels to various Nenets “brigades,” as they are called using old Soviet terminology, she has spoken to girls who dream of becoming fashion designers. She has photographed the diesel generators families tow on sleds so that they can watch Russian Idol on the televisions in their chums, a structure similar to that of the North American tipi. Her pictures are often coupled with quotes from the people she meets. The most novel images, however, are the ones that depict the improvised line between tradition and modernity. ‘Drying Rack’ (2015) shows gathered twigs arranged in a gigantic nest on top of a sled. Hung across the twigs are colorful socks, tights and long underwear, presumably put out to dry, but instead freezing in the subzero temperatures. In a photograph titled ‘Modern Times’ (2015), a wooden, green sled equipped with a satellite dish is pictured against the backdrop of white arctic tundra. The sled is partially covered with a translucent tarp, objects are tied together with a red rope and a bucket hangs on the wooden board to which the satellite is attached. To the urban art audience, this object is eccentric, yet also familiar; it wouldn’t be out of place in one of Berlin’s many white cube galleries. 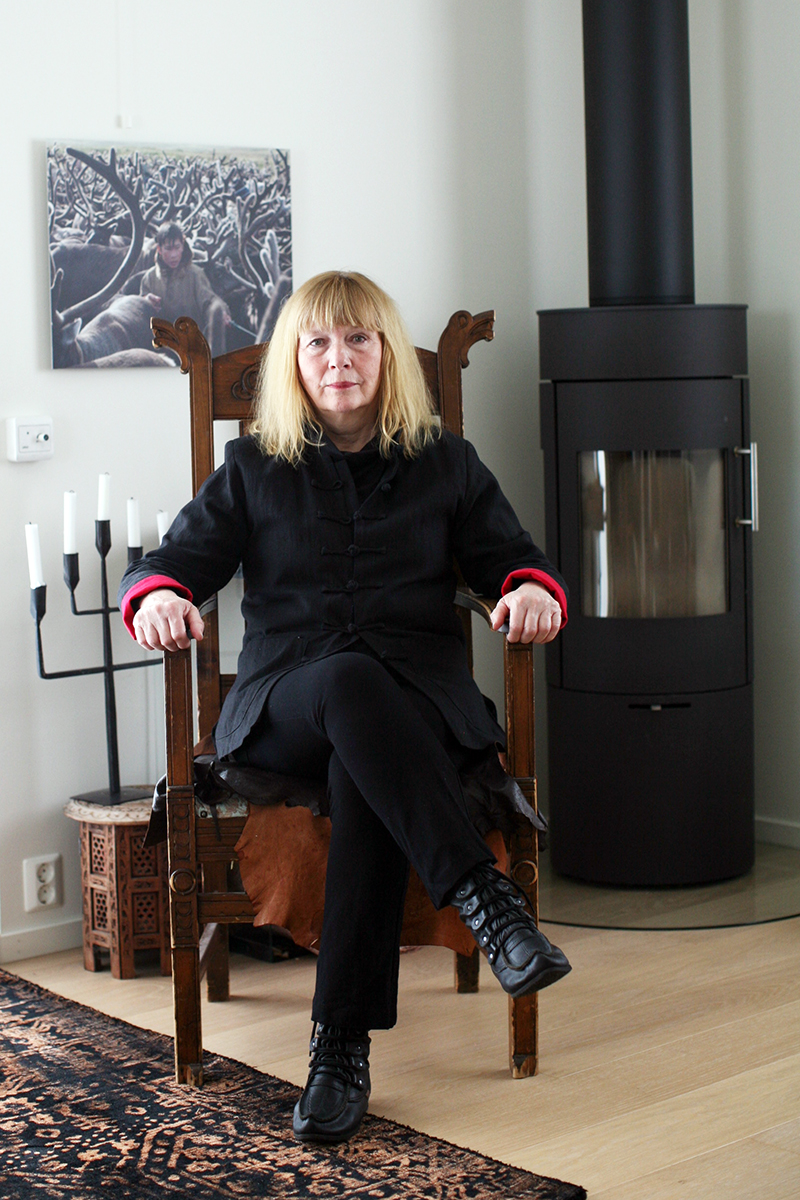 A white cube in Berlin, however, is not the same as a white cube in Kirkenes. Since 1996, Blix Kvammen has been working with curatorial collective Pikene på Broen and, since 2017, they run an exhibition space called Terminal B. The multi-disciplinary arts organization is founded on the premise of cross-border dialogue, specifically the Russian-Norwegian border just 13 kilometers away, but also more general east-west and north-south divisions. As part of their program, they invite regional and international cultural producers to engage with the specific conditions and histories of the north. In contrast to Blix Kvammen’s art practice, in which she focuses on modernizing and preserving indigenous skills, one might say her organizational work “indigenizes” modern structures, thus allowing them to fulfill the potential that globalization and oligarchic capitalism all too often render symbolic.

Before we end our video call, she shows me the neighborhood she lives in from her kitchen window. Nestled in the deep snow is a fire pit, a shared sauna and seven other wooden houses. She and the other families built the neighborhood in 1985. Since then, only two families have moved away. This is just one example of the sustainability that Blix Kvammen aims to foster in all aspects of her work and life. For the artist, the preservation and renewal of past knowledge and custom, instead of representing a conservative traditionalism, can build a stable foundation for future growth and change. 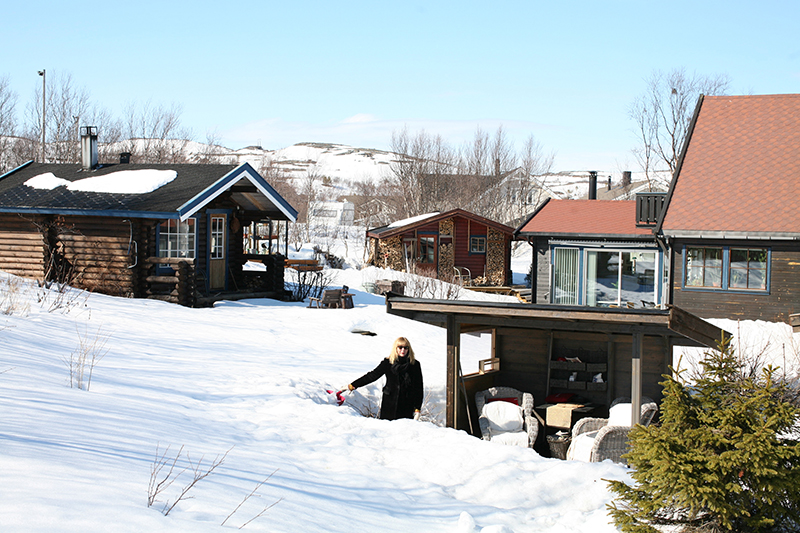 This article is a part of our Features’ topic ‘Landscape’ and is presented in collaboration with the Royal Norwegian Embassy in Berlin on the occasion of their exhibition ‘The White, the Green, and the Dark: Contemporary Positions from Norway,’ in which Inger Blix Kvammen is a participating artist. The exhibition, curated by Sabine Schirdewahn, explores concepts of identity and home through intimate portrayals of the region’s landscape, both ecological and social, using a wide variety of media from sound and film to textile and sculptural works. A further emphasis of the contemporary works on display is the presentation of works by artists who belong to the Indigenous ethnic group of the Sámi. To read more from this topic, click here.