I am standing in front of the window of my kitchen. It is dark outside and I am holding the hand of my girlfriend, as instructed by a voice talking quietly through my headphones. With my eyes closed, I am asked to imagine seeing my windowpane through my eyelids. Then, led by my girlfriend, who follows a different set of instructions, I am carefully taken through my apartment, which, before my closed eyes, transforms into an empty museum with forgotten artworks.

‘AmissingRoom’ is an artwork to be experienced in the evening, when it gets darker and the moon might be seen peeking from behind a tree in your housing block’s garden. Previously shown in various museums across the globe, this artwork has now made its way to our own living spaces in the form of an app. Adapted for two people, the artwork begins in front of a window, with our gaze directed outwards.

Christer Lundahl and Martina Seitl, the artist duo behind this interactive project, invite you to participate in this artwork simultaneously with people around the world through the app, with an event titled ‘AmissingRoom – Not Here Alone nor for Ourselves Alone’ at 8PM CEST on Wednesday, June 24th. This experience will be followed by an artist talk, moderated by Karen Verschooren, art curator at STUK in Belgium. We spoke to Lundahl & Seitl about the concepts behind this new project.

Elizabeth Schippers: The app ‘AmissingRoom’ is an adaptation and recontextualisation of your piece ‘Symphony of a Missing Room’ (2009), which has been shown at various museums over the years. What led you to re-work this project in the form of an app?

Lundahl & Seitl: In March this year, the experience of physical distancing brought forward a memory of an image by Paul Almasy: ‘Louvre, Paris’ (1942) showing empty frame apertures with artist names and inventory numbers for each absent painting inscribed inside. This was the result of the entire museum collection of the Louvre being evacuated to the French countryside during the war. The photograph by Almasy was the leitmotiv for the exhibition ‘An Imagined Museum’ (2016-2017) where our work ‘Symphony – The Mnemosyne Revolution’ was included. This show conjured a speculative future situation in which the works of art on display were about to disappear and the visitors, like the people in Ray Bradbury’s novel ‘Fahrenheit 451,’ were asked to incorporate and store them as a memory in their body.

This image from 1942, although loaded with the darkness of war, appeals to us as artists in that it expresses a presence through absence. When art objects are removed, censored or destroyed from our environment, how long do we still have the capacity to experience art through the projections of our memory and imagination? And what would such a practice be like?

Since ‘Symphony’ was conceived in and for the context of museums, with over a decade of research, a multitude of ideas, thoughts and reflections are virtually accumulated inside its body, when the novel virus caused museums and theatres to close down, postponing or cancelling our work for the year, we asked ourselves; could this participatory work, which is dependent on its visitors, at least temporarily survive outside the settings of a cultural institution and live in peoples’ homes? 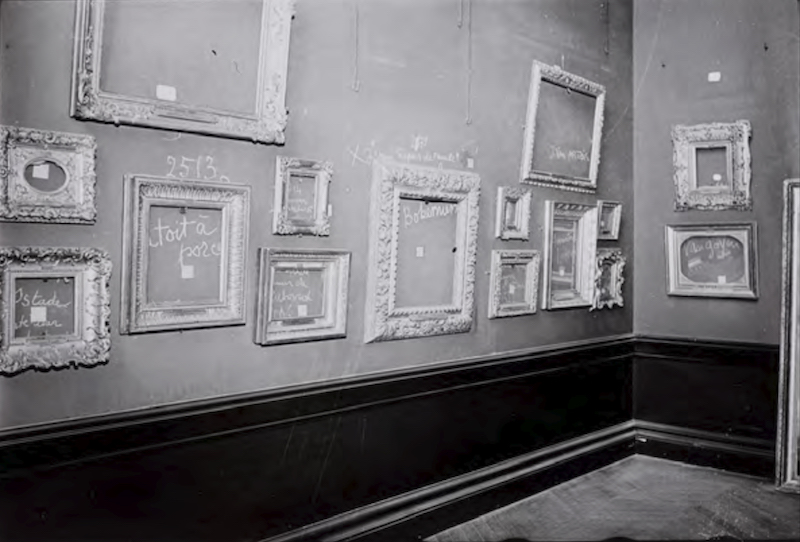 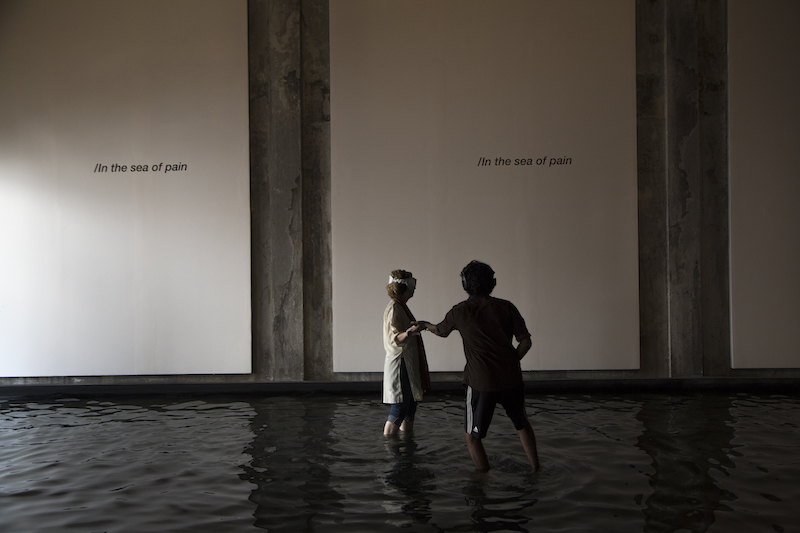 ES: With the release of the ‘AmissingRoom’ app, this immersive artwork has been transposed to the private sphere, where we can experience it in our own house. How does this adaptation of ’Symphony’ reflect on this transition?

L&S: With ‘Symphony’ we have collected a decade worth of research and mutual learning from over 20 international art museums, biennales and festivals, such as Gropius Bau / Berliner Festspiele, Royal Academy of Arts, Momentum 8 Nordic Biennale of Contemporary Art, Centre Pompidou Metz, MMK2 Frankfurt, S.M.A.K, Museum M, STUK and the 2nd Kochi Muziris Biennale. It reflects a variety of works such as ‘One Million Years’ (1969) by On Kawara; ‘No More Reality’ (1991) by Phillipe Parreno; ‘Plaster Surrogates’ (1982) by Alan McCollum; the work by Hilma af Klint, and more.

With the artwork (temporarily) transmuting into an app, we wanted historical and contemporary artworks to float free from their museum anchors and become a present experience in people’s lives, inside their homes. The piece had already shifted traditional roles and perception inside museum spaces by adapting to and mutually learning from its hosts. By moving it into a domestic setting, how would this reciprocal affect translate into a new environment? We simply did not know, but were keen to find out. 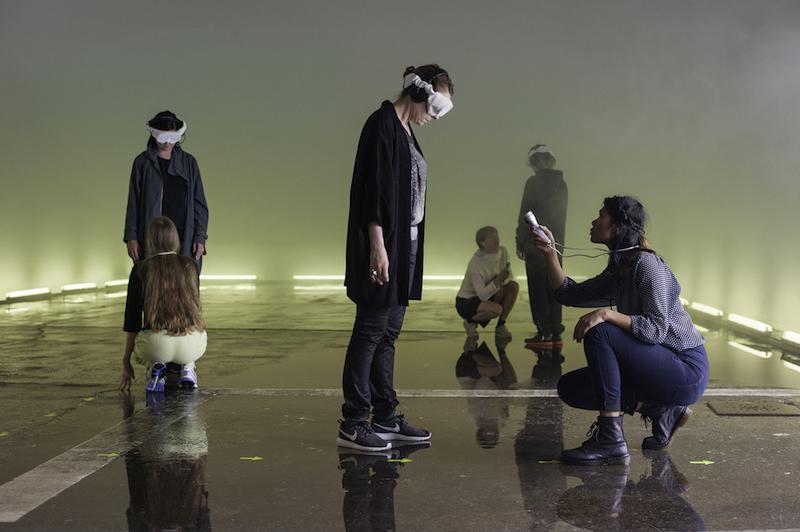 ‘Symphony’ is not something that you look at on a screen, as with the Visual AR artworks where a digital object appears superimposed in the room. Rather, it is a process between two people, using their phones as makeshift VR headsets. The artwork emerges between them as a reciprocal space with dimensions measured and received by their imagination. By asking you to close your eyes and be led by the artwork’s score, carried out by the unseen hands of your friend, a voice in headphones synchronizes the touch, movement and spatialized sound to build an architecture that is more than the sum of its parts.

In response to the coronavirus pandemic, digitalization and surveillance accelerated, laws were reconstituted and living habits altered around the world. Yet, confronted with this rapid transformation, how can we ensure to keep alive what should only be temporarily altered? How can we protect that which cannot (yet) be digitalized, risks becoming extinct, or will be forgotten if not practised or cared for in this present? The setting and format of ‘AmissingRoom’ questions the affordances of reciprocity and presence in times of physical distancing, asking us to consider how we can balance resilience and resistance when adapting to a changing environment.

‘AmissingRoom’ (2020) starts in front of the window inside your house. The window: because it is a symbol of the lockdown, but also because it makes you aware of your own window of perception, which can be opened both inwards and outwards. Although the piece takes place inside a home it pays more attention to the ones living there. We also pay more attention to what is absent: the museum and tangible art in the form of objects. It is thus a choreographed score of moving, sensing and touching this absent yet felt presence of art. 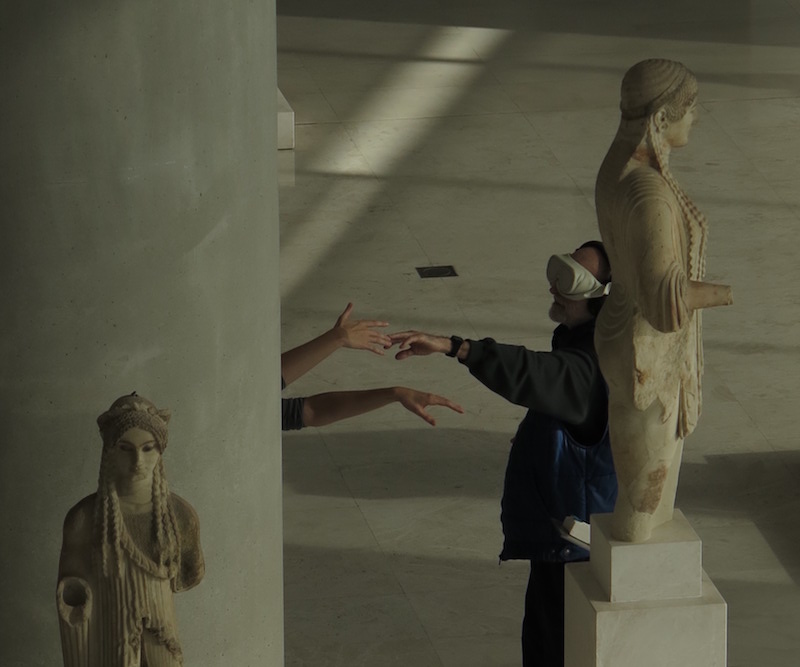 Lundahl & Seitl: ‘Symphony,’ at the Akropolis Museum // Courtesy of the artists

ES: You have described ‘Symphony’ as being about making a presence out of things that are not there. This tension between absence and presence also comes up in your other works, such as ‘Unknown Cloud.’ How did your interest in this theme develop?

L&S: We have begun to understand that we create an art that deals with engaging collaborators in shared processes with the same kind of complexity as dynamic systems. As such, it cannot be fully understood through linear descriptions. Yet the process pushes forward by accepting and keeping material that we only understand intuitively, from internally held and mostly unconscious information. Many of the titles of our works, such as ‘Unknown Cloud’, relate to the missing, the inaccessible and the invisible, and grow out of the realization that we act in a world that we do not know much about, other than a linear understanding of cause and effect. We have a deep wish to approach things that we cannot fully understand objectively, to comprehend time intervals longer than our human life-span in order to understand the world from a system perspective, in the same way that James Lovelock imagines Earth to be a super-organism composed of all life, tightly coupled with the air, the oceans and the surface rocks.

We realised that there was a need for perceiving the world from other perspectives than merely intellectual or linear first person perspectives, in order to go beyond the limits of our own knowing. For example, we cannot perceive the Earth rotating, so we say that the sun sets while it is actually us rotating backwards away from the sun at 500-meters per second. We did not evolve to experience these things. Our senses were sharpened to protect the body and to socially survive in a local community. Now our species existence is dependent on our awareness of the impact we make on our environment. With the ‘Unknown Cloud’ we wanted to create a new ritual for how we can be present with each other and the relation we make with our physical surroundings. We consider how the use of our technological devices also shapes our habits, our expectations and ultimately our perception of reality.

ES: In a previous interview you did with Berlin Art Link, you mention that you aim to use technology in such a way that it reintroduces us to the natural abilities of the body. How has this notion been incorporated in the development of the app?

L&S: ‘AmissingRoom’ is reminiscent of how individuals from different generations live side-by-side interacting with each other, but somewhat fail to coincide and share each other’s realities. Inside the missing room, visitors pass through walls, into tunnels that travel through a network of past exhibitions and museums. Other artists, dead and alive, far and near, echo into the symphony as an endless conversation. In the process of creating this potential room of reciprocity between two people, the work serves as a companion providing a score for interpersonal sensibilities that risk going extinct or being forgotten if not practiced or cared for.

The artwork takes place in your home by using the mobile phone: a device that we are accustomed to use in almost every aspect of our lives, shaping our habits and expectations of reality. ‘AmissingRoom’ uses the smartphone to operate as a score to unlearn what we expect from technology, including the refusal to accept living in a reality reduced to information on flat screens. It is a reminder of what it feels like to be fully present in a higher bandwidth of the environment, in our bodies and with each other. 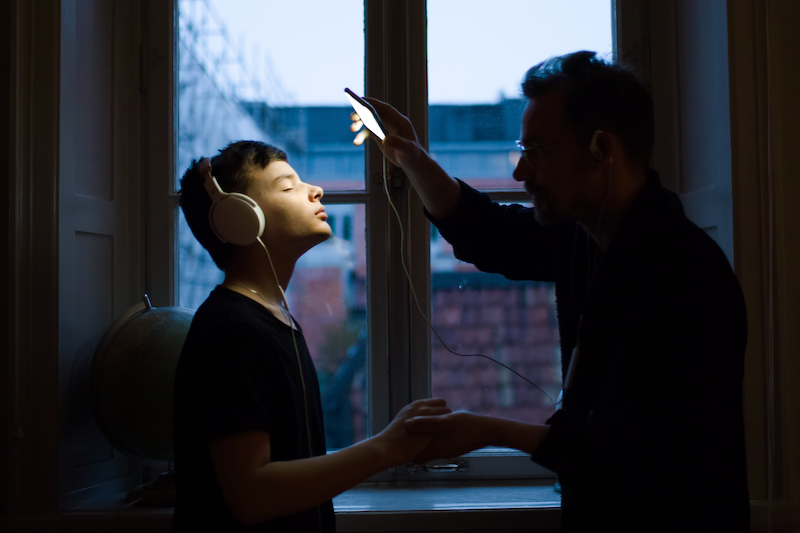