‘L’Abécédaire de Georges Adéagbo’ at Barbara Wien is the gallery’s second solo exhibition by Beninese sculptor Georges Adéagbo. The title comes from ‘L’Abécédaire de Gilles Deleuze’ (The ABC of Gilles Deleuze), a French television program that aired in 1988–89. The program is an eight-hour interview series between the philosopher Gilles Deleuze and the journalist Claire Parnet. Deleuze’s interviews draw from his own writings, which explore the “image of thought.” Like Deleuze, Adéagbo explores his own “image of thought” through diverse techniques of adaptation, movement and transformation. 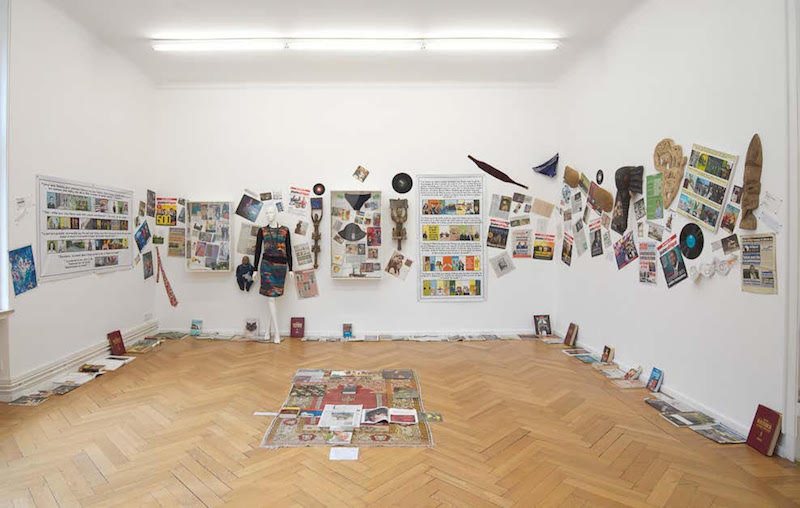 Adéagbo uses artefacts from Benin to create connections between his home country and cities in Europe and the US. In an exhibition at Stockholm’s Moderna Museet, he weaved an assemblage of artefacts from Swedish cultural history that linked Benin with Stockholm, such as a painting from the 16th century, depicting celestial phenomena above Stockholm, reproduced by a Beninese craftsman as a wooden relief. At MoMA PS1 in New York, Adéagbo created an installation that intertwined narratives of American culture with West African ones. He gathered objects from the streets and shops of New York and shipped them to his Benin studio where he altered them, added local items, and then returned them.

His altars of artifacts of printed matter seem as though they were were prepared for shipment to another planet to explain, without having a common language, what a “cultural transfer” entails. Adéagbo is divinatory in his lay-out: it seems as though the clusters and associations of material are relics that only need to be put into a certain pattern to be deciphered, to be understood. 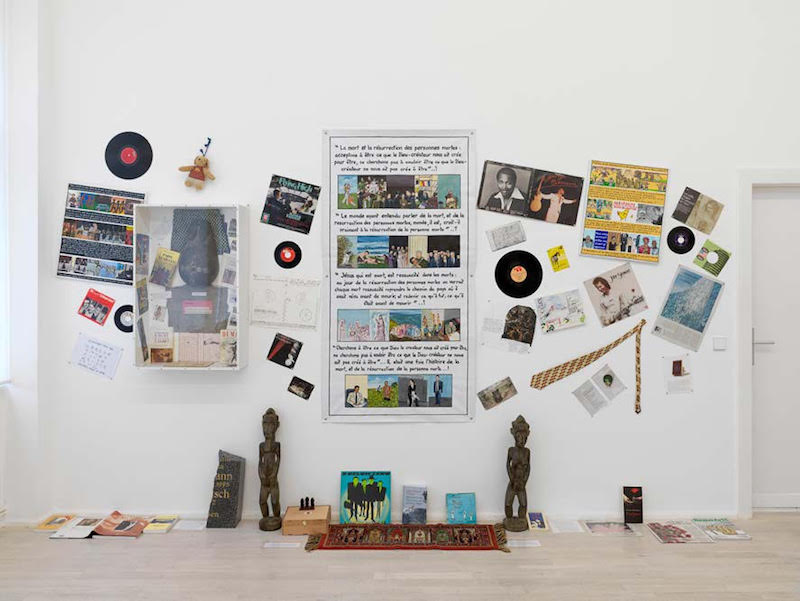 A mannequin posing in late 90s fashion is placed next to 70s funk albums, newspapers, comics, mens’ ties, swimsuit bottoms, advertisements and German books on ancient Egypt. There is a carved wooden sculpture of the outline of Africa, a French paper with Macron and Trump posing placidly next to their wives on the cover. The potency of the objects are both personal and societal, like a time capsule, sent off into the future and the objects included in these time capsules present all of real life’s strangeness and surprises. The globalized world feels even more condensed: Adéagbo combines African print dresses, clippings from Exberliner, Le Monde and German health insurance ads, ‘The Notebook’ DVD, a pile of bricks, a stop sign in Arabic, empty wine bottles, German novels, handwritten Chinese scripts and print-outs of the faces of Jenna Wortham and Wesley Morris (critics for The New York Times and creators of the podcast ‘Still Processing,’ in which they discuss race and culture in America).

It is through the subtle act of juxtaposing and comparing his chosen objects that Adéagbo critiques existing institutional frameworks. His assemblages of these political and socio-cultural objects and images produce a mirroring effect, both literally and conceptually, of the processes of large Western exhibitions. Adéagbo’s installations are exhibitions in and of themselves as much as they are artworks, and they move fluidly between these categories. By moving within these different categories and identities, as well as through their travels between Africa and Europe, Adéagbo’s works have a certain agency. Shifting between the roles of curator and artist, Adéagbo exists inside the art world as much as outside of it, assuming an implicitly critical role while asserting his personal creativity. 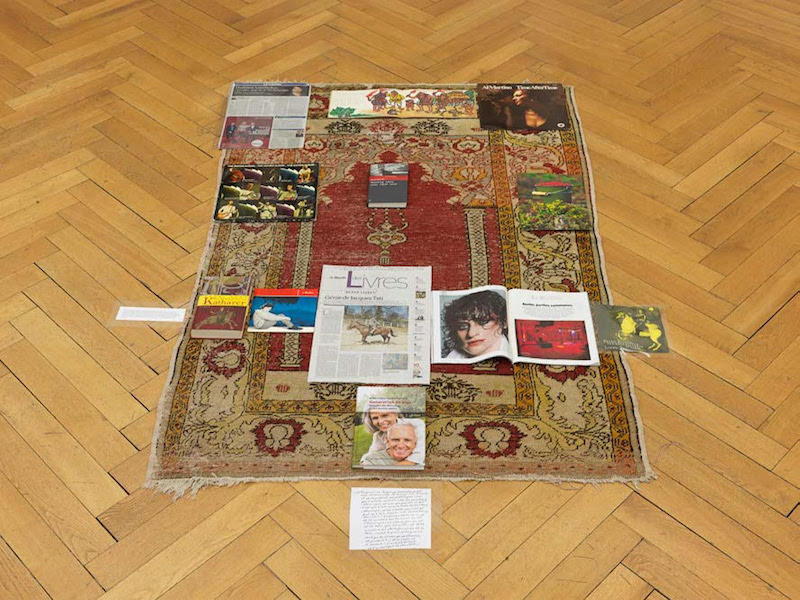