Yishay Garbasz is a Berlin-based interdisciplinary artist. Her work primarily explores culturally specific inheritance of traumatic memories. Over her 20-year practice, Garbasz has worked with marginalized communities and in areas affected by war and disaster, through which, in her own words, she engages in “a continual process of making the invisible visible, making the unsightly tenderly seen”. Garbasz’s work was recently featured in Phaidon’s book ‘Great Women Artists’ and her artistic activism takes many forms throughout her work. We spoke to Garbasz about the process behind her pieces, the exclusion of trans women in the Berlin art scene and how she inserts herself into privileged spaces as an act of resistance. 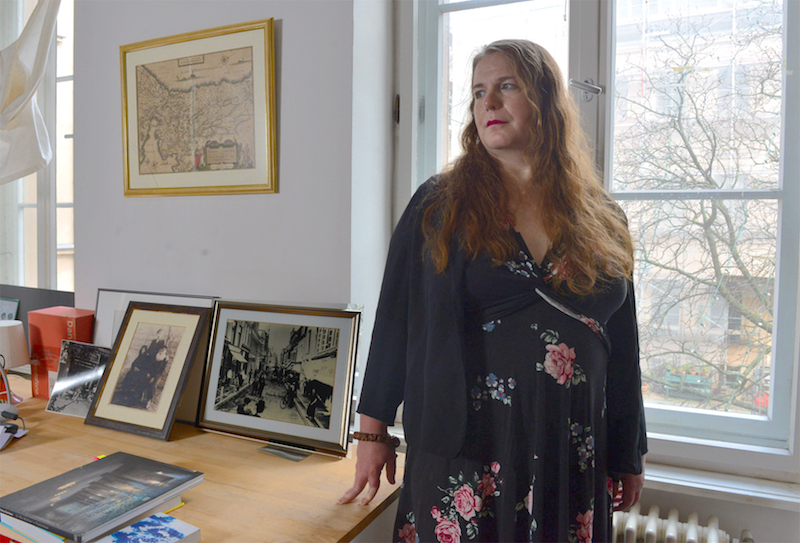 Alison Hugill: You often speak about how your identity, as an artist and a person, is forged in trauma. How does this affect the process and outcome of your work?

Yishay Garbasz: In order to see the world outside me, I have to see the world inside me: it’s about polishing the mirror. Once you move aside the personal junk, it allows you to see things more clearly. My experience of being abused and of intergenerational trauma shaped how I see things. For people who have not experienced that, these things are invisible. But it’s not the only thing that I am sensitized to because of my lived experience.

I spent three years on crutches due to an injury. The funny thing is, when you ask someone how many steps lead to their house, it’s almost a formula: when they say there are no steps, that means there’s five steps. If they say five steps, it’s one floor up. It’s the invisibility thing: people just don’t register it because it doesn’t affect them. And that’s what trauma and disability and other marginalizing factors do—if you don’t experience them, they are invisible to you. These intersections affect my work fundamentally. They aren’t an interest of mine, they are my life. I see the steps clearly. 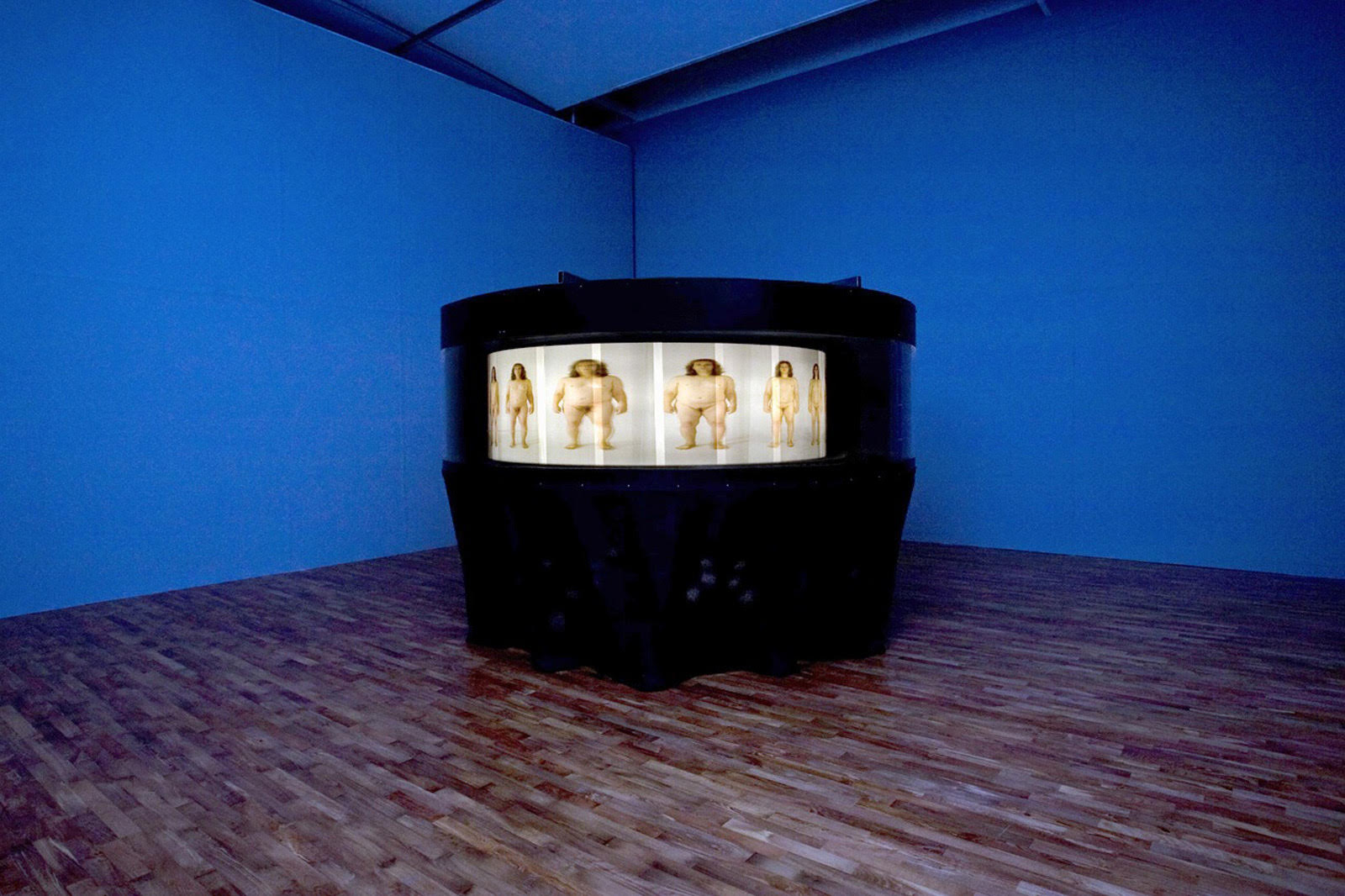 AH: As an artist whose work is intersectional, what has your experience been of representation in the Berlin art scene and beyond?

YG: The fact that I’m a woman, who is also trans, is not a big deal for me. I did one project about it in the Busan Biennale in 2010, and that was really important, interesting and I moved on. But I keep getting excluded because of this part of my identity. On one hand, I am not trans enough to be included in trans shows, and too trans for others. The Berlin art scene is particularly exclusionary of trans women. For example, the Schwules Museum has a long history of not including trans women as artists, but rather as “content” in their exhibitions. The Berlin Women’s Museum hasn’t shown any art work by trans women. If 90% of the shows in Berlin feature men, of the remaining 10% there is very little space for trans women. And nobody relinquishes space for us.

On International Women’s Day this year, I participated in a demonstration about the exclusion of women from Berlin art institutions. I was really struck by the fact that the organizers of that demonstration could only think from their perspective. The one minority group they highlighted was “women with children” which is, in fact, not a minority group at all. You do not get killed in the street for walking with your kid. From their perspective, that was the minority group that had to be protected. They had no concept of race, even. They were really looking at what was missing in front of them, and not who was left behind. So I was their “diversity icon” and when I asked them what would happen if there was any transphobic attack on me during the demonstration, their reply was to ask me to please speak only about topics that related to all women and not any “special” topics. That really encompasses my experience of the Berlin art scene.

I can be a subject for many people, but I cannot be an author. More than that, the only place where trans artists can be authors is when speaking about trans experience. The only thing you can cover as a queer artist is queer experience. That is not only ridiculous but it has a colonialist background, it’s pure exoticism. This is transwashing of what are, in fact, colonialist spaces. I want to see the opposite of that. I want to see street-based trans sex workers of colour showing work about education, childcare, home. That would be a lot more interesting than covering up the craving for exoticism by only giving minority artists dominion over their minority status. Let minority artists speak about everything! The opposite of marginalization is to center these minority voices: not through exoticism but by actually giving room. However, as Audre Lorde says, you can’t dismantle the master’s house using the master’s tools. 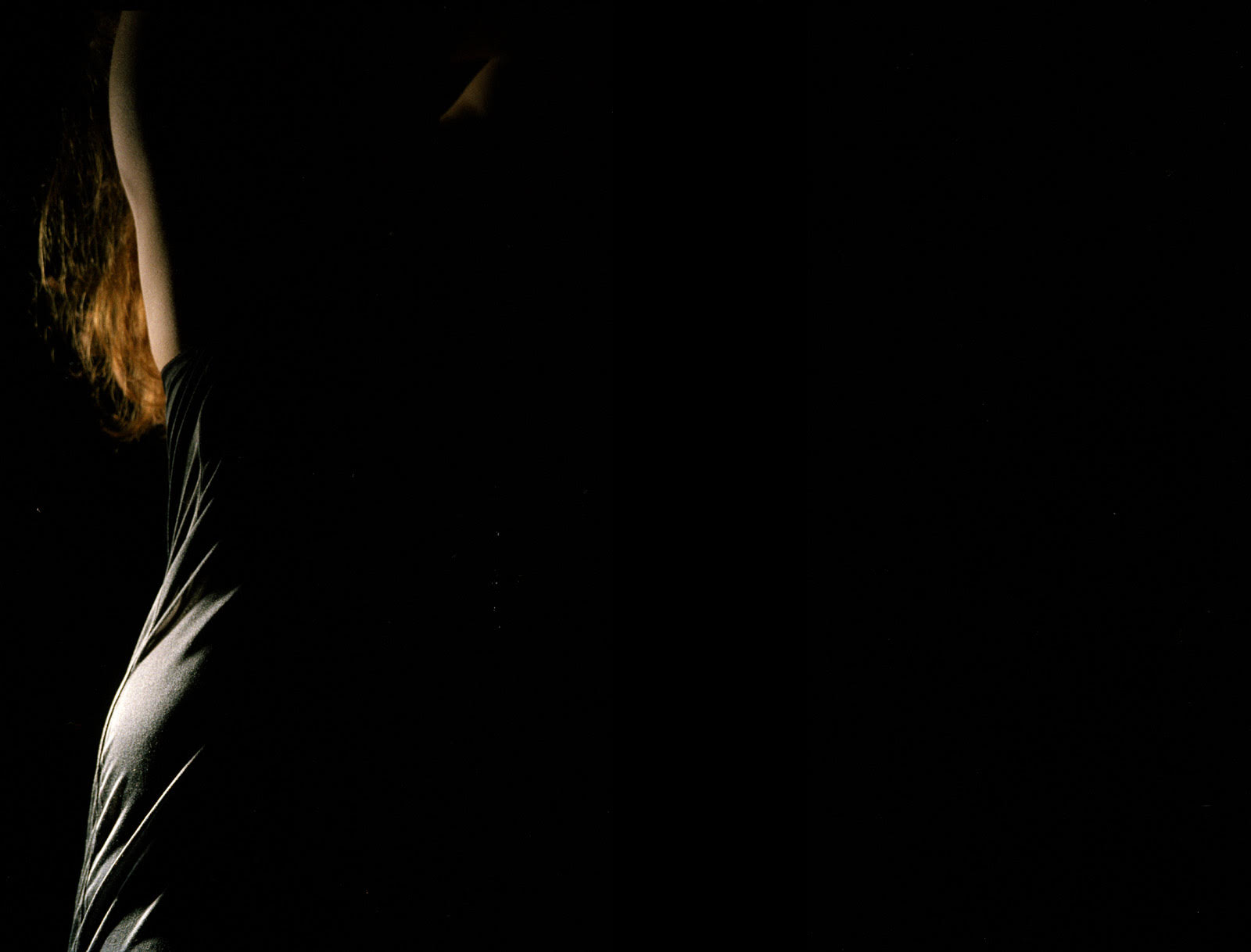 AH: In the ‘Gender Project’ (2002-03) you ask: what is the minimal amount of visual information that provides our brain with the identifying “knowledge” of gender? How does this project function for you as a form of critique of gender as a social construct?

YG: I was interested in using negative space and the minimal amount of visual cues that trigger our brain to assume gender. It was really about how our brains work in terms of recognizing gender. It takes very little visual information for our brain to denote gender. I wanted to know: how much data does it take to have this binary view? My interest, for this project, was about certainty and how little it takes for us to be certain about something. It’s a shame because uncertainty is really powerful, not knowing is a form of intimacy and we cherish that when we receive it.

Gender is a powerful topic for so many people. When I say powerful, I mean: without any scientific backing, people have seriously strong opinions about it. How does that happen? To have such a strong, unconscious root for something so trivial. This type of thinking is a huge thing in right-wing nationalism. People’s right to exist is doubted. People are getting murdered, either by the police or by militia carrying weapons. In the UK and in Poland right now, for example, people have such strong and harmful feelings about other people’s genders. And to repeat it louder for the people in the back: other people’s genders are their own business. We have no say in other people’s genders or existence. It’s not a debate. 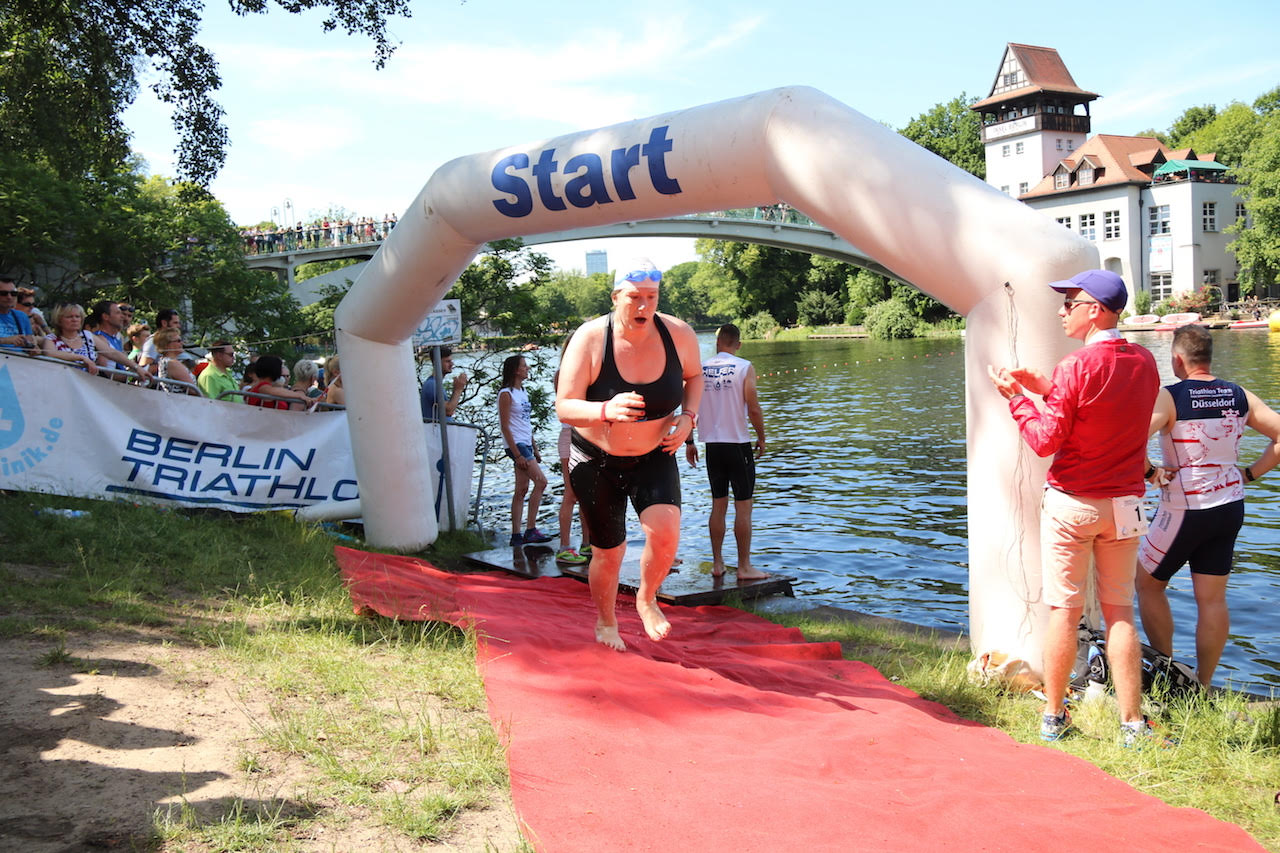 Yishay Garbasz: ‘Untitled,’ the transition between the swim and the bike in the ‘Triathalon Activist’ project, 2016-2018 // Courtesy of the artist

AH: In your recent and ongoing project ‘TRIATHLON ACTIVIST’ you were seeking to include fat, trans, poor bodies in what is an exclusive and very privileged space, that of specialized sports, in particular racing triathlons and other endurance sports. Why was this project important to you?

YG: I took a different approach here. I asked: where is the most amount of people who are crying out for education? The triathlon is one of the most privileged sports. Being a fat person, I can’t buy sports clothes my size in Germany; they just don’t exist. There is a constant message that I should be doing more sports, but I can’t actually get the clothes. The only place you can buy technical sports clothes is in the US. Nothing else will fit me.

Fat, like my vagina, is similar in that it’s “magical”. I once asked a famous curator who curated the Sydney Biennale for help getting my project ‘In My Mother’s Footsteps’ into a gallery and he replied that I should check where Bruce LaBruce, who does semi-pornographic films, shows his work because they show “speciality” artworks. And this was a project about the Holocaust that has no depiction of people in it!

There have been many stories about the medical profession ignoring health concerns of overweight people because they attribute everything to fatness and refuse to look at any other possibilities. It’s somehow magical: this attribute takes away all other conversations. For this project, I wanted to insert my body—which is very different from all other bodies in this sport—in order to create change. This was not a context that they would expect my body to be in. 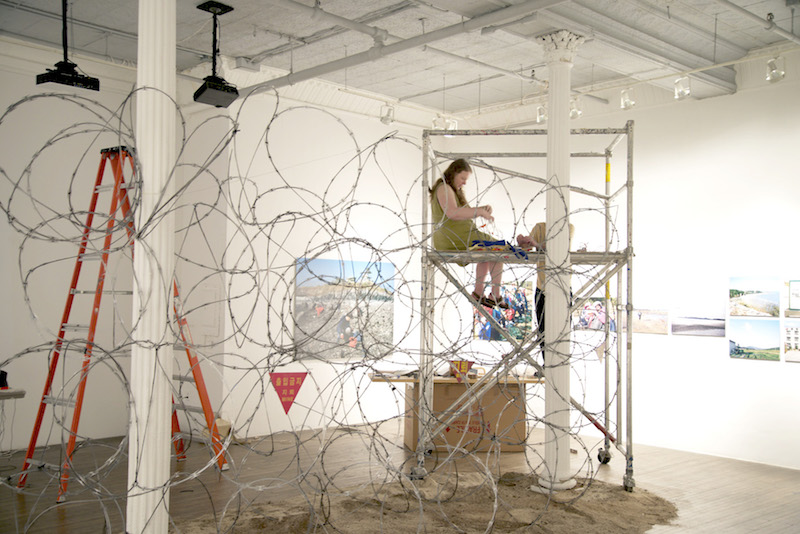 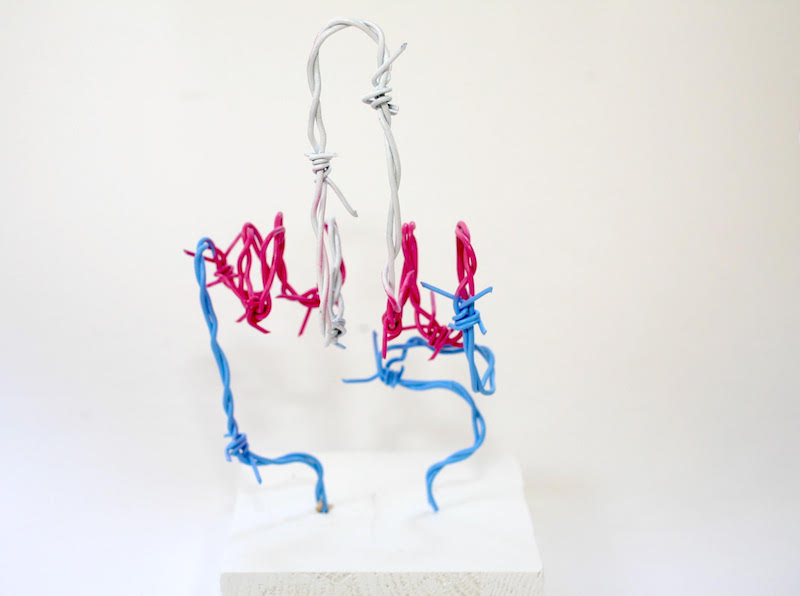 AH: Can you tell us about what you’re working on now?

YG: I have a small side project that came out of a dear friend’s dark days, when she would think that she is unloved. I spray painted “I am loved” on a T-shirt in mirror script, so when she wore it and looked in the mirror she would be reminded how she is viewed by others, including me. This became my lockdown project to support my community.

I’m working on a project that has to do with nationalism and violence. I am using the literal materials of borders to explore nationalism. I am using razor wire, barbed wire and electric fences, which I use to make flags of countries that are, in my opinion, neo-fascist, like the US and the UK. It’s not just about the Black Lives Matter movement, but also about Black trans lives. There’s a lot of mention of Black men but we also need to think about Black women, who suffer many different forms of oppression. Black trans women have such a short life expectancy, and if we make a world that’s good for the most vulnerable of us, it will be good for the rest of us. We can change how the world works.