Asad Raza’s expansive cross-disciplinary practice defies categorization. Situated somewhere between performance, installation and curation, its elusiveness can be attributed to many factors. Primary to these is the fact that Raza’s work rejects the rigid prescriptiveness that these disciplines often demand. Rather, his open-ended, site-specific installations supply fertile ground for interaction, ideas and communities to develop. In his piece ‘Absorption’, currently on view at Gropius Bau as part of ‘Down to Earth’, this is quite literally the case. Twenty tons of artificial neosoil have been installed within the gallery space, cared for by a team of “cultivators” who tend to the soil, raking it, testing its PH levels and gifting it to visitors to nurture their own gardens. Here, both the soil and its cultivators act as a conduit for conversation and community.

With a background in film-making, Raza composes situations in which to explore our relations with non-human living beings, and each other, with a view to thinking about how we can foster new ways of approaching and caring for these relationships. Whether through a fully-functioning tennis court installed in a 16th Century Milanese church; 26 young flowering trees and their caretakers at the Whitney Biennial; or tons of artificial soil in Sydney and Berlin, his works far exceed the bounds of the walls in which they are situated. We spoke to Raza about this radiating effect, the role of agency and new ways of thinking about care and kinship in the creative community. 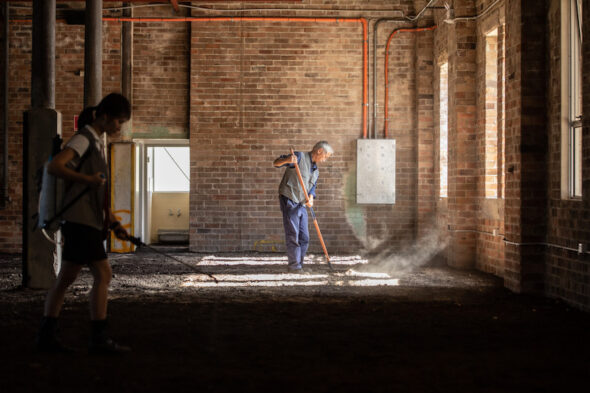 Hannah Carroll Harris: ‘Absorption’ was originally conceived as a Kaldor Public Art Project at Carriageworks, an old industrial railway workshop in Sydney, Australia. What was the process of transplanting the piece and its ideas to Berlin?

Asad Raza: One of the issues I was thinking about was the landscape and how the history of human civilization, in the last few hundred years, has been to break off pieces of the landscape, or to process the landscape into all these different ingredients, these separate components, and then use those components, commodify and distribute them. And I felt that it would be interesting to think of a project that could reverse this direction. What if we set up a new process that was about bringing separate elements, waste products and other components back together and mixing them into a new landscape, into a new soil and then giving it to people?

In Sydney, we made the soil out of components that were found in Sydney, and we did the same in Berlin. Here, the basic components are sand and silt and clay from Brandenburg, and then organic matter from the Berlin Metropolitan Authority, as well as a lot of different waste materials that we found in Berlin. For instance, construction pallets and cardboard boxes of the museum, clothing, coffee grounds, hair from local salons. I think the basic impulse of the piece holds steady anywhere. It becomes a fingerprint of the city. 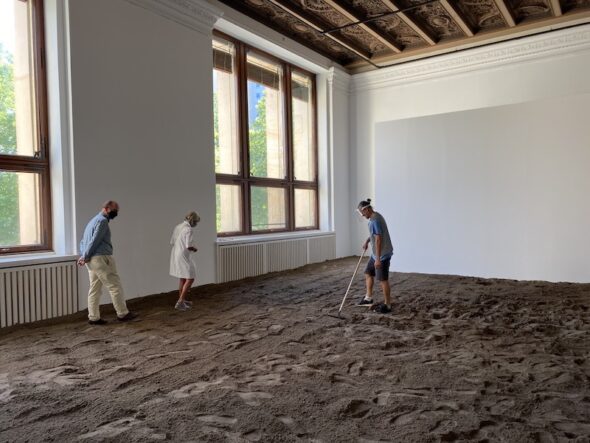 HCH: If place is vital to shaping your work, so too are the people you choose to perform it. How do these people and their perspectives become a part of the piece?

AR: One of the things I really enjoy doing in my work is creating these groups of people, these interactions. In the Milan piece, it was young tennis players. In Sydney and here at Gropius Bau, it’s the cultivators. In my tree piece, it was the caretakers. So it’s a real pleasure. I feel it’s kind of an honor to get to meet all these people in a city.

In Gropius Bau, we have a Palestinian filmmaker, a Romanian theater-maker. We have a gardener from Germany. We have a poet and translator from Ukraine. We have so many different kinds of people there, and it’s through these groups that I’m trying to create a kind of culture, a culture that belongs to the piece that we all agree on. They determine parts of it, and I determine parts of it. It’s a real group and we really are mixing the soil. I also got interested in this idea that art should not always just be only a representation of something: it’s also interesting if it really is that thing. This really is a group of people who are mixing these ingredients, found around Berlin, into a new soil. 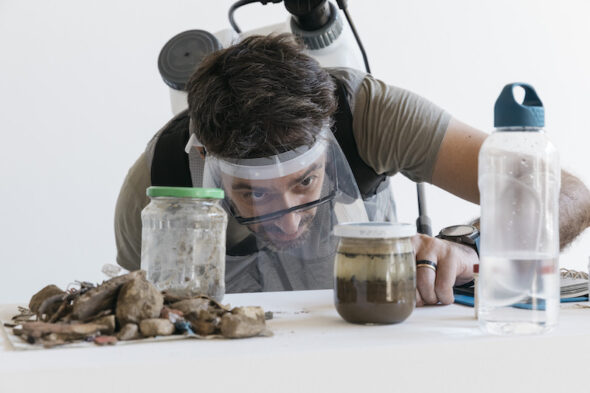 HCH: Your work has this ability to breach the physical bounds of the space in which it is situated, through the cultivators, through the audience, to become much more than the sum of its parts. This aggregating effect takes place on a physical level in ‘Absorption’, as visitors are invited to take the soil home, but it also happens on another level, through the networks you create. How do you see these ‘invisible’ aspects of your practice?

AR: I always like the idea that the piece is a process. It’s not a result. So the process starts with finding these things and combining them and making this stuff in this room. And it slowly fills up the room and it accumulates. But then the next phase is the distribution. The process continues with the distribution: it ends up in all different parts and fields and gardens in a city. I’m more interested in this aspect of the piece, as a process, of making it and distributing it.

I just think that it radiates outward. There’s the piece. There’s the room itself. There are these concentric radiating communities that are engaged with the piece. I have this phrase in mind: “social fabric”. Because a fabric is something that is very flexible, but it’s got a strength to it. And you want to create a good social fabric for a piece, not a weak social fabric that will just tear. You want it to be able to hold the piece.

HCH: There’s a care involved in bringing these groups together. This generosity extends to the non-human living beings that your work so often makes visible. Is there a role for new notions of kinship in the way you forge affinity with our non-human, as well as human, counterparts?

AR: I’m very interested in creating networks between human and non-human life and also non-living materials and objects. I think if you could rethink kinship to go beyond just the human social group to implicate non-human beings and living beings, then the idea of kinship could become really interesting because it’s about affinity and relation.

It’s also about a kind of affinity that goes beyond just the transactional to include the emotional, to include the affect of all of the members of a kinship network. I think we need to do that and not remain in this modernist idea that we have to have some sort of removed objectivity or adhere to some sort of affective neutrality. That’s not working out. 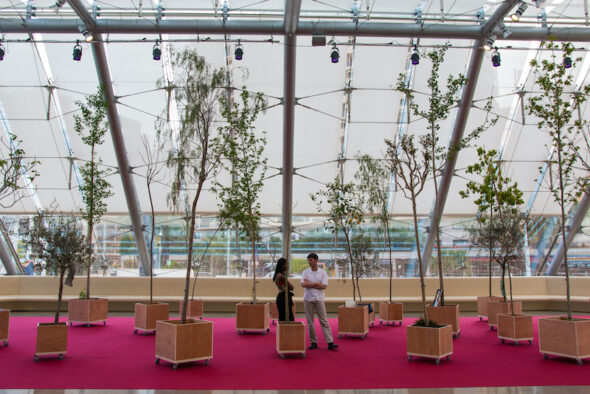 HCH: We are currently in this unimaginable moment in time, where a microbial force has demanded that people question their usual modes of existing. How do you see this virus changing how we view community and our relationship to non-human others? And did it directly influence your practice?

AR: The lockdown gave me the impetus to try to think about how we can create spaces for people using tools that I hadn’t used before. ‘Home Cooking’ is a collective project that I started in March and it’s about creating a community with other artists and other people who are all in lockdown. In that moment in March, when everyone’s projects had been canceled, I felt there was a lack of a place for people to be enacting their current living culture. So I thought it would be interesting to get some people together and try to provide a space where things can still be happening in the present. Now, I think 70 different artists have contributed something to it. So it feels now like it might become a digital artist-run space or something that keeps continuing on. 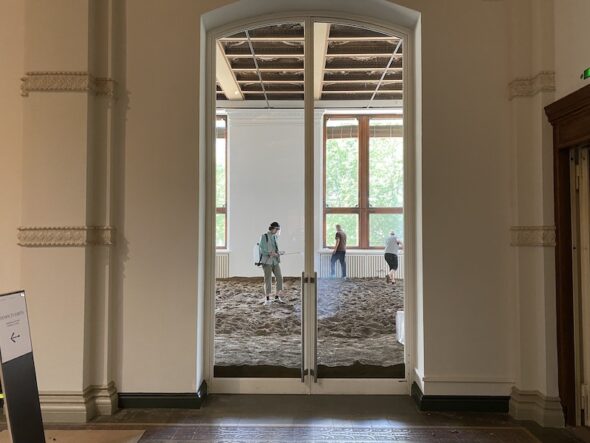 I think one thing that’s interesting about lockdown is that by reducing people’s choices of the activities that they can do, it hopefully reminds people that the meaning-generating capacity of human beings is not actually given from without, it’s produced by humans themselves in relation to whatever is around them. And, moreover, I think it’s good to be reminded of the power of this biosphere of microbial life that is surrounding us and inside of us all the time, and that it’s only by some sort of complicated negotiation with that biosphere that we even exist at all.