Art Laboratory Berlin’s exhibition and symposium ‘The Camille Diaries’ delves into a discourse on the intersection between conceptions of motherhood and scientific technology. The artworks unite around speculation on what parenting will look like in the future. The title of the exhibition is a reference to Donna Haraway’s hypothetical future of reinvestment in care between species, presented in the final chapter of ‘Staying with the Trouble’ (2016). The works in ‘The Camille Diaries’ explore thematics of gender, scientific possibility, environmentalism and the multiple meanings of motherhood. The participating artists presented are all women and non-binary, and each adeptly presents both artistic and scientific responses to complex topics, such as experimentation with hormones, cloning genes and chlorophyll synthesis. With the help of supplementary text accompanying each artwork, visitors are offered an accessible explanation of the basic scientific tenets of the works. 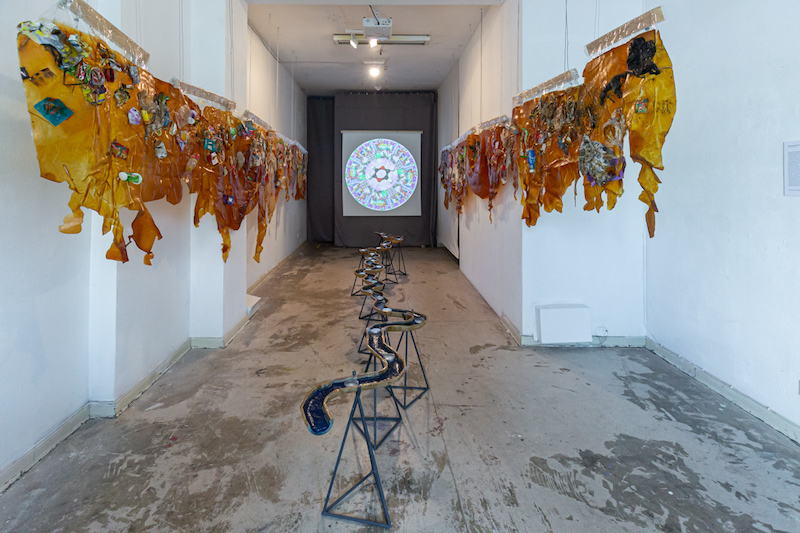 The first point of contact in the show is Mary Maggic’s multi-sensory work ‘Milik Bersama Rekombinan’. It is multi-sensory not only because of its gripping audiovisuals but also its olfactory dimension, from the garbage fished out of the River Code in Yogyakarta, Indonesia. In this piece, Maggic reflects on the pollution of the river as a symbol of colonization. Accompanying the installation is an audio children’s story she created, called ‘How the World Stopped Moving,’ in which the river is given a voice to explain how—unable to digest all the plastic pollution it has received—it must gift this trash back to humanity for ingestion, through microplastics that are re-consumed. Her artwork, like many others within this exhibition, becomes a sort of experiment, as her sculpture of the river has ongoing chemical reactions taking place and petri dishes containing depolluting mushrooms. Furthermore, the dye used to color the river—representative also of the many Batik jean fabrication facilities in Indonesia—is set to change and morph as it comes into contact with agents in the air. The latex material meant to resemble skin, which takes the shape of the hanging river on each side of the room, has already darkened, an ongoing process that will persist throughout the exhibition. 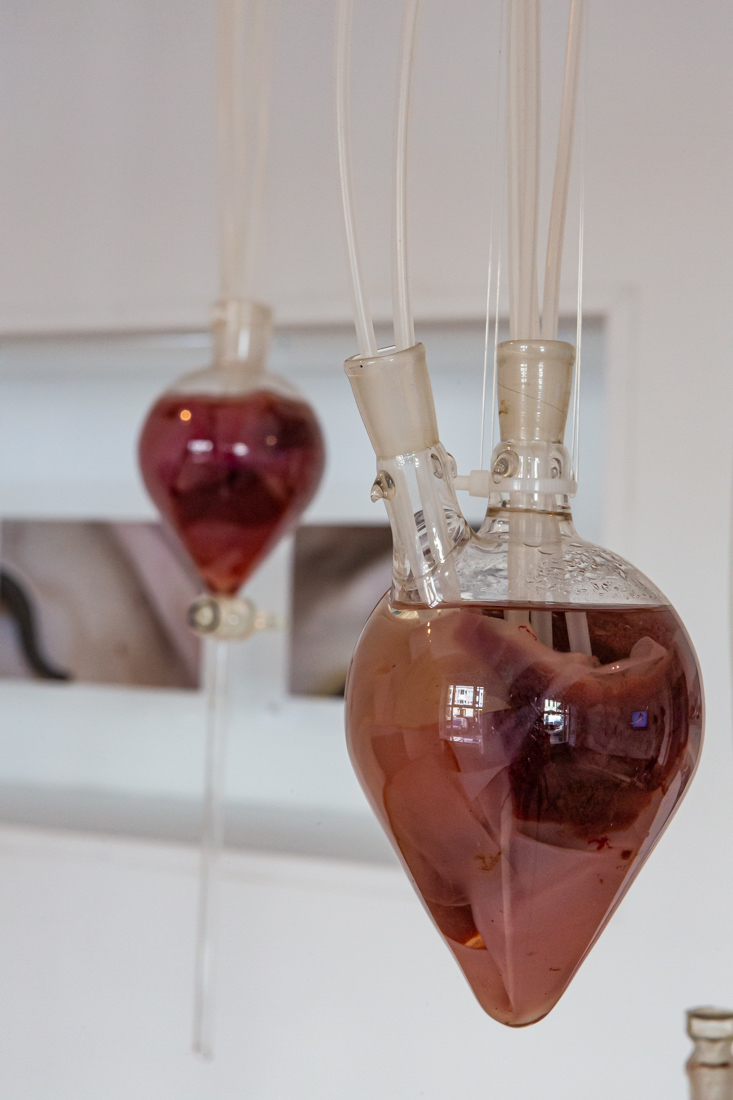 This continuous motion and change is seen in other works presented, such as Margherita Pervere’s ‘Wombs’ series, composed of hanging glass receptacles holding within live bacteria cultivated from the artist herself. Meant to be a reflection on the mass prescription of hormonal birth control pills, the artist has extracted her own hormones from a urine sample to create new life within this very scientific and stark environment of a glass beaker. Throughout the exhibition, audiences should be able to spot bacteria growing gradually. This is reiterated in Nicole Clouston’s ‘Mud’ series, which was a collaborative effort between the artist and the gallery owners, who together sourced different mud extracts from various locations in Berlin. The mud of different chemical consistency will interact with the air and transform in color and texture as new bacteria and algae take shape. Clouston offers an ode to the primordial ooze in which life originated: can mud itself not be considered the original mother from which all life sprouted? 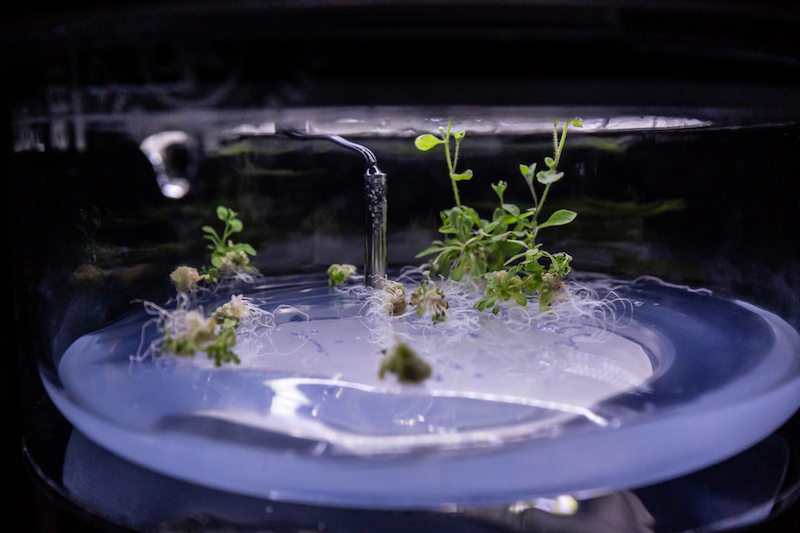 These questions on the meaning of motherhood and multispecies parentage are foregrounded in the exhibition. Špela Petrič questions normative genetic parentage by proposing an alternative. By isolating cloning genes found in her urine, Petrič becomes a bio-chemical co-mother to ‘Phytoteratology’ plants cultivated in her multimedia biological installation. Cautiously prepared to conceive the growing of such genetically playful plants, the installation of a variety of tubes, wires and cooling agents to create an ideal environment reflect on the fragility of new life as it is brought into being and the much-needed care from a parent. Meanwhile, Ai Hasegawa explores the moral implications of giving birth in a time of environmental crisis. She ponders the choice of whether or not to conceive with the creation of a logic graph, accompanied by her video piece ‘I Wanna Deliver a Dolphin’, which depicts a woman giving birth to a Maui Dolphin. This vision refers back to the title of the exhibition itself with a contemplation on the current crisis and the heightened interspecies care required to save endangered species. 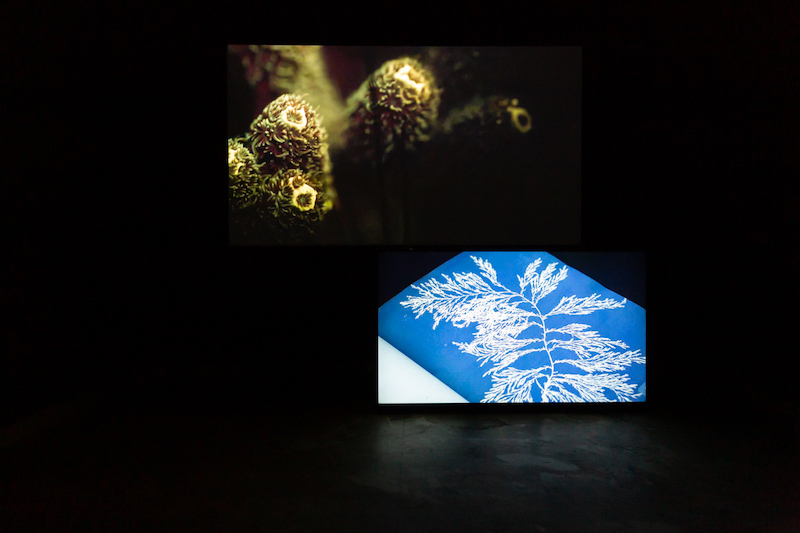 Sonia Levy: ‘For the Love of Corals,’ 2018, video installation // Photo by Tim Deussen, Courtesy of the Artist

The exhibition is particularly thrilling for sci-fi lovers, with pieces like Cecilia Johnson’s compass made from iron extracted from placentas, or an ethanol synthesizing drip bag by Tarah Rhoda. Shockingly, everything presented exists outside of fiction and can very well become a universal reality if we choose this direction. The women and non-binary artists in this exhibition create a study on an expanded definition of motherhood, one that breaks species barriers in the hope of creating solidarity. ‘The Camille Diaries’ permits visitors, gallerists and artists alike to participate and witness first-hand the ongoing artistic experimentation with scientific conceptualizations of motherhood. The research will culminate in a symposium to discuss the results with speakers from around the globe.