‘Sunburst’ consists of a two-part installation made over the course of Canadian artist Amélie Laurence Fortin’s year-long residency at Künstlerhaus Bethanien. The solo exhibition is a continuation of Fortin’s interdisciplinary cycle of investigations into solar storms and the sun as a phenomena. In the darkened exhibition space, a single red light is cast onto a geometric steel structure. The structure’s form—characterized by negative space—has a runic, esoteric quality. It rotates periodically, activated by an unknown force; its moving shadow on the red wall a choreography of angles. 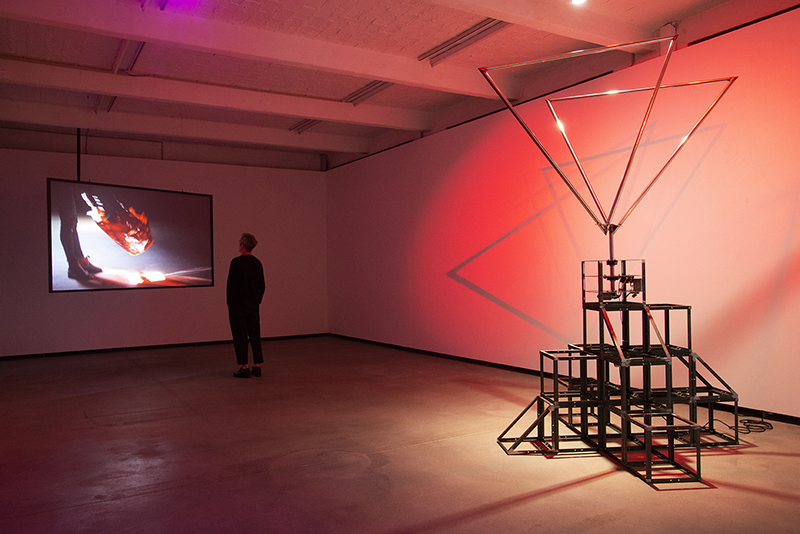 Opposite the kinetic structure, a single-channel video plays. In it, Fortin stages an improvised choreography around a beam of sunlight channeled through an attic skylight. Limited by the material and spatial constraints resulting from travel restrictions and border closings this year, Fortin conducts her exploratory practice using what available materials she has in her impromptu attic studio. Fortin’s ‘light exercises’ are an interplay between the sun, the body and movement. ‘Sunburst’ is a culmination of these exercises. In the film, she holds a piece of reflective, translucent red foil, her tool for manipulating the light source. While the kinetic sculpture operates with enigmatic and fluid mechanical movements, Fortin’s performance in the film is the site of more unpredictable movement/action, mirroring the sun’s explosive energy. At times it appears as if the red foil undergoes a transmutation into liquid fire, Fortin able to grasp in her hands the surface of the sun—a promethean gesture of intuitive exploration and curiosity. 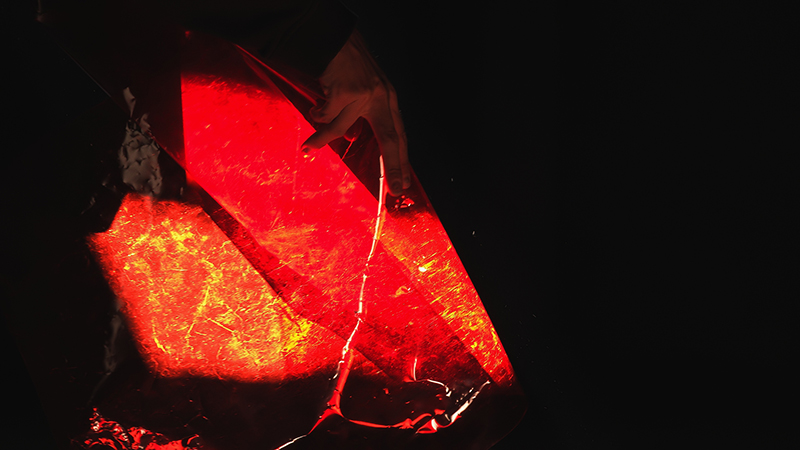 The viewer alternates between the two motions—the kinetics of the structure and the performance on screen—negotiating their own position in relation to the others in space. Who or what is manipulating whom in this triangulation of elements? One might make the assumption that their position as a viewer activates the movement of the sculpture, just as Fortin’s on-screen movement transforms the character of the light source, but further observation and didactic material reveals this is an erroneous speculation—all movement is dependent on the sun. The revolutionary, kinetic movement of ‘Sunburst’ is programmed using forecast reports based on solar activity and, as such, ‘Sunburst’ leaves the viewer in their moment of hypnotic curiosity, asking what more can be discovered through Fortin’s formal exploration on solar activity and its effects on terrestrial bodies? 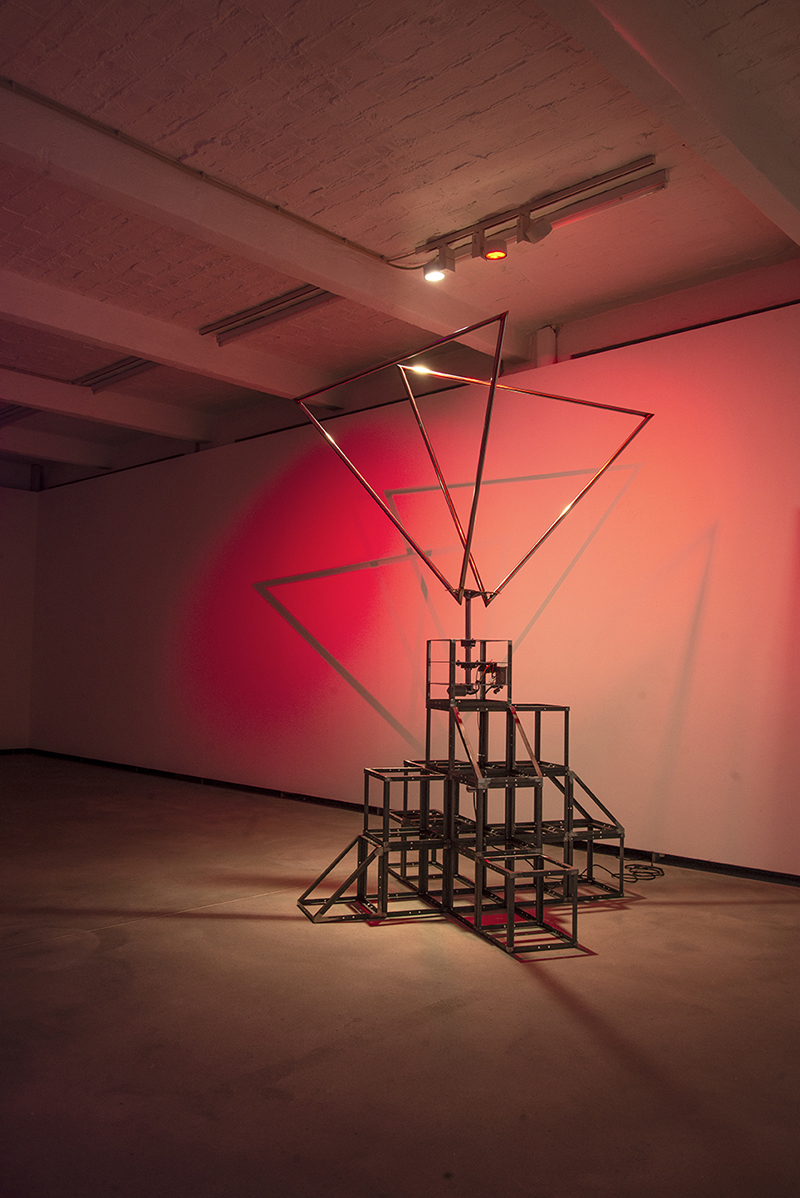 Fortin’s experimentation brings to mind the lineage of scientists interested in the sun as phenomena, as well its relationship to this current terrestrial moment. In 1924, Russian biophysicist Alexander Chizhevsky published ‘Physiological Factors of the Historical Process’, wherein he states that historical events—revolts, revolution, war—develop in response to solar activity and the formation of sunspots. Geomagnetic storms caused by solar flares lead to an increase in negative ionization in the atmosphere resulting in an increase in human mass excitability. Six years later, after researching the relationship between the spread of epidemics and solar cycles, Chizhevsky published ‘Epidemiological Catastrophes and the Periodic Activities of the Sun’. Almost one hundred years after Chizhevsky’s first publication, major popular uprisings are building momentum around the globe, an epidemiological catastrophe claims millions of victims and thrusts into glaring focus stark inequalities underlying amnesiac ‘normalcy’. While this causal relationship does not alleviate humanity from the responsibility (and work) of remedying destructive tendencies, acknowledging the pattern can offer a moment to reflect on historical conditions as repetition: we continue rehearsing all the same choreographies under the sun. Perhaps through the gestures of Fortin’s art one can find moments where ruptures are possible. 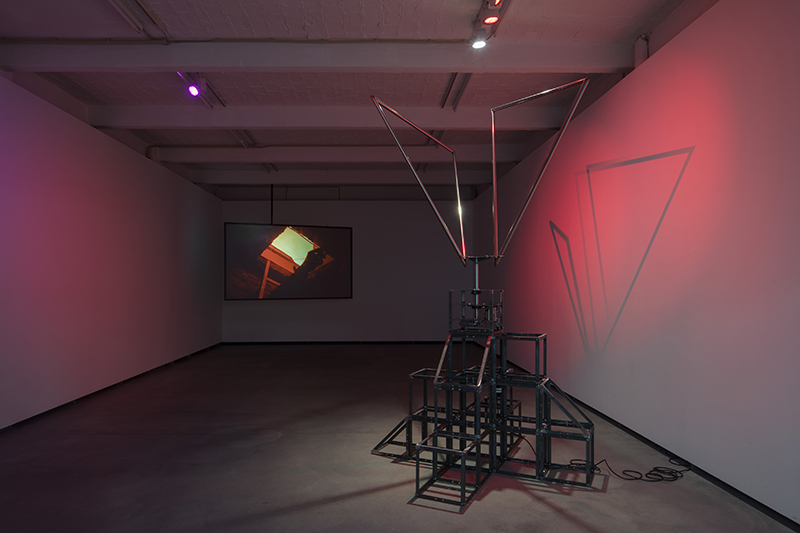 Fortin’s ‘Sunburst’ builds upon her decades-long artistic practice, wherein she questions the subject of exploration, space and time. Her practice involves multidisciplinary installation, often inspired by expeditions and adventures that she then translates into her conceptual exhibitions. Though her formal explorations are not overtly political, the subject matter she approaches and the way she recontextualizes these ideas allows her audience to question established notions of space, perception and scientific inquiry.