Marina Rosenfeld’s practice explores social encounters and experimental participation, turning sound into a three-dimensional field where listening becomes an act of conscious engagement with one’s own body and other bodies. The Brooklyn-based composer and interdisciplinary artist investigates deeply-coded structures built into the extractive technologies of our time; her staging of these encounters—through performance, sculpture, drawing, installation—speculates about the potentialities of creating sonic structures outside of our present mode of sociality and extractive economies.

We spoke with Rosenfeld in the midst of a chaotic, acrimonious election, our conversation a breath (pause) from the constant buzz and ding of news and social media updates. We discussed Rosenfeld’s site-specific performance ‘Ssalute’, recently opened as part of the AURORA Biennial in Dallas, Texas, curated by Noam Segal and Associate Curators Trey Burns and Tamara Johnson. The culmination of three years of work on her ‘Deathstar’ project was also released on November 6th, as a double album with Shelterpress. Looking to the future, Rosenfeld’s solo exhibition ‘We’ll Start A Fire’—opening in May at Kunsthaus Baselland—will consist of sound, objects and performance, tackling many of the ideas and themes discussed in this interview.

Noëlle BuAbbud: Can you explain what ‘Acoustic Architecture’ means in relation to your practice?

Marina Rosenfeld: I am using sound as a space where an encounter happens, whether it’s musical sound, language or abstract. The idea of a sound, regardless, is a space where I believe it’s possible to articulate a social relation. Physically, one can become aware of one’s own body, the contours of one’s presence or co-presence between bodies. My interest in architecture has grown with my interest in what it means to encounter oneself and others inside of a soundspace. I like the term “soundfield” because it is a way of describing sound in three dimensions, as a volume as opposed to just an idea of linearity in time– which obviously it also is. When we’re dealing with sound we’re dealing with the passage of time as well. So an ‘Acoustic Architecture’ is a way of identifying a focus.

MR: I think the beautiful possibility that one speculates about is that an encounter with a situation, a sound environment or a performance can produce a different kind of awareness. It can cause one to become alive to the idea of this thing as an encounter, not just as a kind of frontal assault by some form of entertainment.

NB: ‘Ssalute’ is part of the 2020-21 AURORA Biennial in Dallas. It takes place in a parking garage. This manner of moving through the world (in a car) heightens senses of alienation—in what ways does your piece address this, maybe hyperalienation, through sound?

MR: This is a work that is entirely organized around the contingencies of the present moment. It’s not a work I would have imagined before our commitment to self-isolating. When I say commitment that’s somewhat aspirational, but to a certain extent everyone is participating in this attempt to distance ourselves from each other. That combined with car culture, the architecture of corporate downtowns that came up in the 80s and 90s in many American cities, is kind of a perfect storm in a way of a uniformity of alienation. To make a work that begins there is quite interesting because it felt like an opportunity. But I think that the salute, the idea of this salutation to the driver who is protected in this vehicle, points to a social encounter with all these layers of mediation– the primary one is the car and moving through a space.

My idea was that the Texans can roll down the window, that this is a significant move to a certain extent. My sense of it (previously as a guest in Texas) was that the car is a very central and important space for people. The car is, in some sense, the antithesis of the commons. On the other hand, there is the act of rolling down the window and allowing one’s pod to be penetrated with an unknown substance: this aggressive, loud, momentary salute or greeting. A greeting even in the sense of the old fashioned role that trumpet players played in old movies where they announce; a heraldry. To me it is funny and also serious because of what the gesture signifies. This gesture of raising the instrument to one’s lips is quite a resonant act. The choreography of the gesture, even the shape of the instrument, visualizes amplification as it comes in a thin stem from the mouth, away from oneself in a kind of expansion outwards. So the work sits somewhere in between a hyperalienation and a momentary sociality or spectral presence. 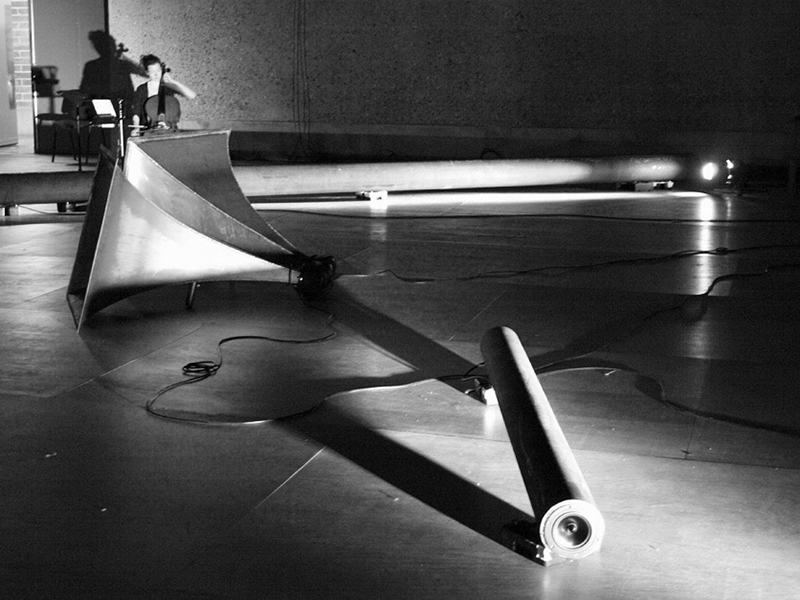 NB: The desire to have this social encounter where you’re protected in your interior space but the action of opening the window and being met with that gesture, welcoming something inside that you might not otherwise encounter, creates this interesting dynamic.

MR: Also it’s one-on-one, I don’t know how many people will be in each car, it could be one driver or a whole carload. I hope there will be carloads of people because that would be interesting. But at its basis it’s actually a kind of one-on-one encounter: one car comes in at a time and is saluted or greeted with this gesture, passing the performers, Dallas-based musicians Raquel Samayoa, Chris Doty and Freddie Jones. The whole thing takes about a minute and fifteen seconds, and the car is passing through the architecture of the car park—this very beautiful concrete labyrinthine spiral—and the sound I’m trying to generate in there is labyrinthine, it echoes and decays through these ramps and levels. After the first fifteen seconds or so, the live person (performer) is behind them and they’re just passing through this space where sound is essentially decaying.

NB: What role does the idea of “salutation” as a form of ritual play for you in our current social / political climate?

MR: This morning more than ever we are living with the implosion of our idea of ourselves as a civic body. America is in real trouble, in my opinion. Maybe it has always been in trouble and we’re experiencing the end of a series of illusions we have managed to prop up. I think there’s nothing more serious in a way, even though there’s some kind of humor about this piece, there’s really nothing more serious about the encounter of two of us as citizens, as members of a commons in a public space. I don’t care if it’s a carpark or a courthouse or the grocery store, maybe it’s an opportunity for us right now to reformulate what we think about this encounter with the other, at its most basic level. I’m trying to locate my ideas there, where it feels so consequential, even though this is a kind of ephemeral gesture. 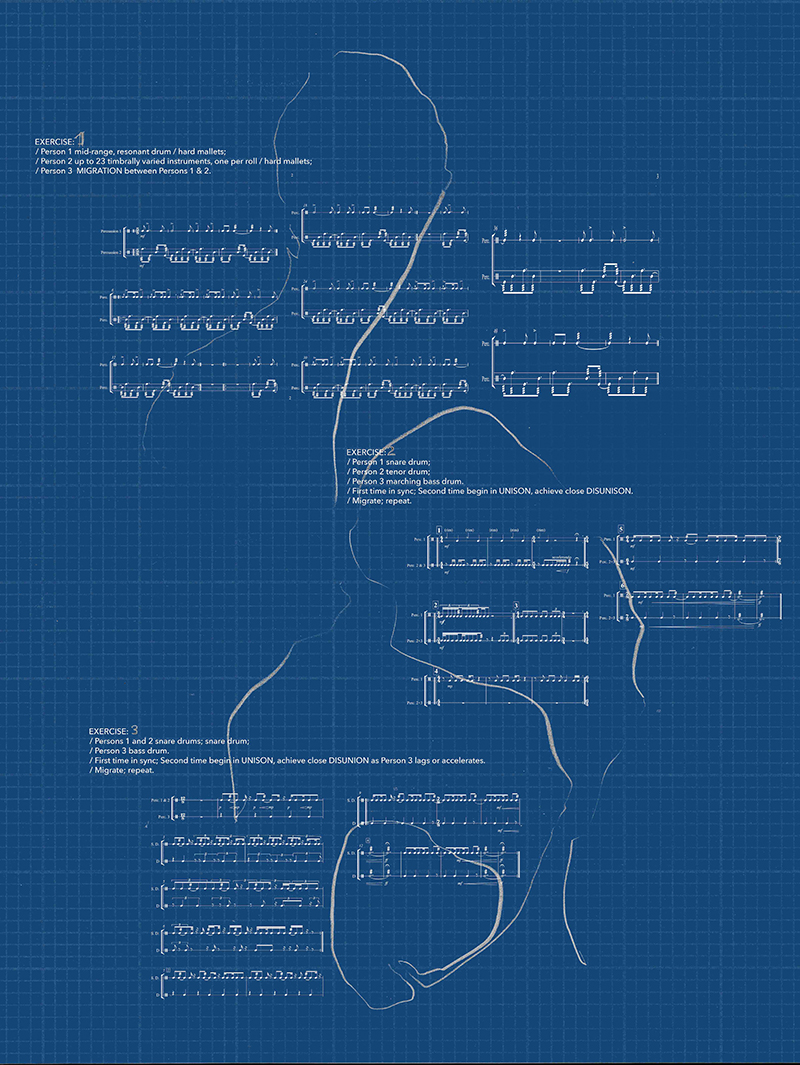 NB: In what way is the work “speculative” and what does it aim to achieve?

MR: I’m looking at this moment in my work where forms are happening between people. Does our listening to each other have a shape? To me that’s an interesting question and, obviously, a speculative one because these are all contingencies and forces that are in flux. As we move away from these ideas of universal transparency and communication—discredited enlightenment ideals that more or less are still with us—we can begin to maybe understand more about what the commons could be under aspirational conditions of more fundamental equality between bodies, between voices. The amplified voice is the louder voice, it’s the voice that travels. Just listening to that voice and wondering about it is a very rich investigation for me.

NB: More and more we exist (socially) within echo chambers and feedback loops, leading to a kind of tenuous confirmation of certain knowledges at the expense/erasure of ‘other’ ways of knowing. How can the idea of an ecology of sound disrupt this condition?

MR: If we evoke the metaphor of the echo chamber, that’s really apt. I am creating a space where sounds are not so much echoing as self-propagating. You’re passing through that propagation and then decay. To bring it back to the idea of rolling down the window as a meaningful intervention into the echo chamber, the space becomes permeable. I think that is important. Perhaps one of the ways in which the work speculates could be that it proposes a momentary method of making that closed space open. To make it penetrable. And to invite in something that is unknown.

NB: Can you tell us more about your position as a research artist with Experiments in Art and Technology at Bell Labs Nokia and future potentialities unrealized in technology?

MR: Bell Labs has such an important history for those of us that are in experimental music and interdisciplinarity, going back to the encounters of John Cage, David Tutor, Rauschenberg and the ’9 Evenings’. The research engineers and development of new gear at Bell Labs has a very resonant history for people like me. So it has been really nice to have been welcomed into that space in several different ways. I’m always interested in an intervention in the middle of something, like an invention that happens at a certain moment that is then passed over on the way to a more popular technology. When we look at what didn’t work out, for instance the Death Star microphone array that I was working with the last several years, we can see the path not taken and again we can speculate or even propose for a different branch off the tree. Working with a microphone array allowed my thinking and tactile experience with what this object allowed to pose those kinds of questions about what we have been doing. What if we had been doing this instead? What if music could be a space where we could encounter alternative futures? Paths not taken? Where could we invest in the perceptual capacities that the body has, that are essentially negated by the exigencies of communication technology, the gig economy, datafication and exploitation of our biology and our cognition by outside actors who want to data-fy us.