I arrive at Hanna Frenzel’s home studio in Charlottenburg on an overcast November afternoon. The neighborhood she has lived in since the 1980s has undergone major gentrification, her own home and building currently in the process of renovation and division by developers. Frenzel’s space—an environment filled with her generosity and warmth—contains her prolific and meticulously kept archive. Frenzel is a German performance and interdisciplinary artist, who was born in Frankfurt am Main and moved to Berlin in the 80s to pursue her performance-based work. Our visit is an oral testament to the ways in which Berlin allowed artistic life to flourish for decades, acting as a site for possibility and experimentation: a reality that may or may not be slipping away. 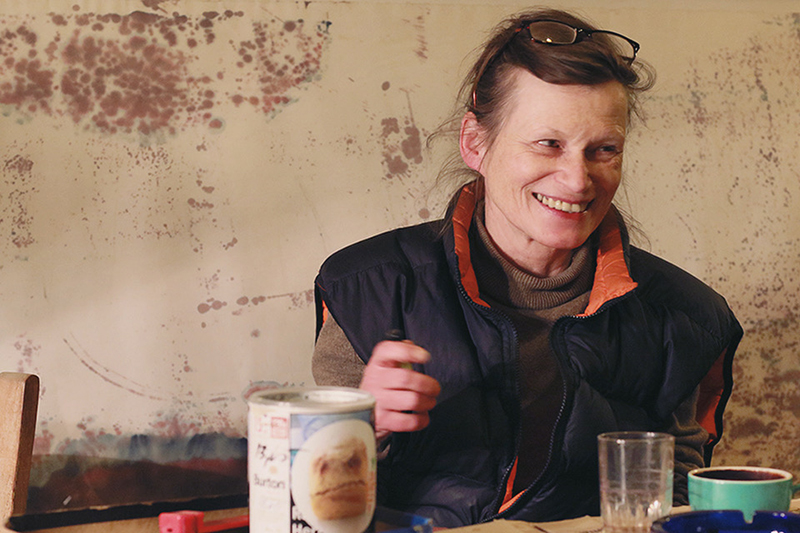 We sit down at the massive table in her altbau West Berlin flat, different exhibition catalogues and materials arranged before us. My attention is immediately drawn to her daily agenda. Filled with extensive notes highlighted in bright colors, it is a kind of impeccable mnemonic organization. “I never thought that I could become a performance artist,” Frenzel remarks while pouring us tea. As she is reflecting on the challenges she encountered in order to remain true to her creative process, I look through documentation of her very physical and demanding performance pieces ‘Gummoving’ and ‘Chronos’. What is apparent is Frenzel’s persistence and commitment to her ideas. “My grandfather and father were painters, and they said ‘What is this? This is not art…forget about it, first go to the academy and learn something’”. She attended the Art Academy in Munich, which she describes as boring and lacking in solidarity. Despite the doubts of her family, Frenzel found that Berlin was a welcoming space for experimentation at the time. She describes the city in the 80s as a special place, where everyone was glad to meet a young artist: “It was an artistic paradise”. 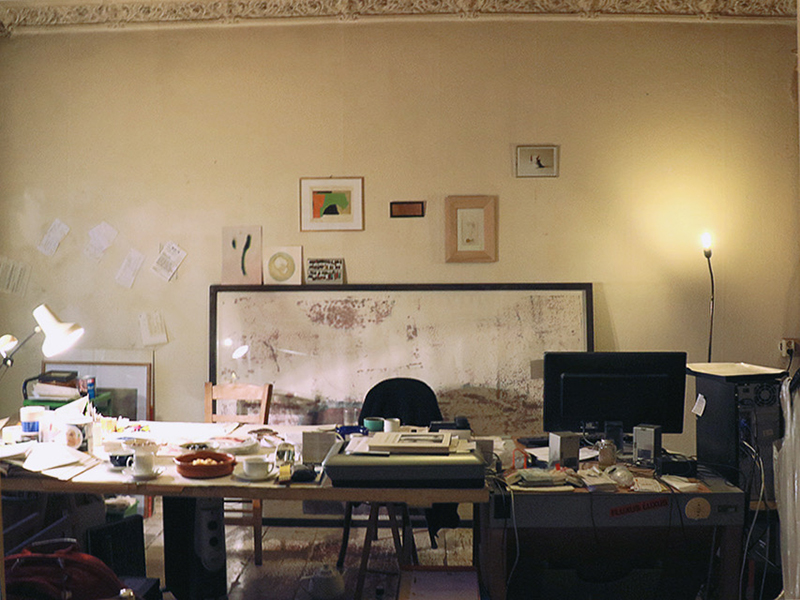 In ‘Chronos’ – a performance staged in the bottom of a salt mine – Frenzel is enclosed in a transparent column and we watch while salt pours in, piling up around her body, until the point at which she is fully encased in a pillar of salt. “Now there is an over-saturation of artists in Berlin,” Frenzel states. Indeed, the city has changed, the ability to survive while making art has become increasingly difficult. We don’t have to look far to see this shift: scaffolding interferes with the view outside of her window. She describes living with the sound of the construction everyday: “It’s like an opera. I love the machines, they’re really like animals sometimes, the sounds they make…” The Berlin Frenzel moved to is being actively taken apart, destroyed by distant actors. Frenzel is not frozen in the salt, she breathes and—as is the case throughout her performance practice—makes new movements in spite of the conditions she sets for herself. 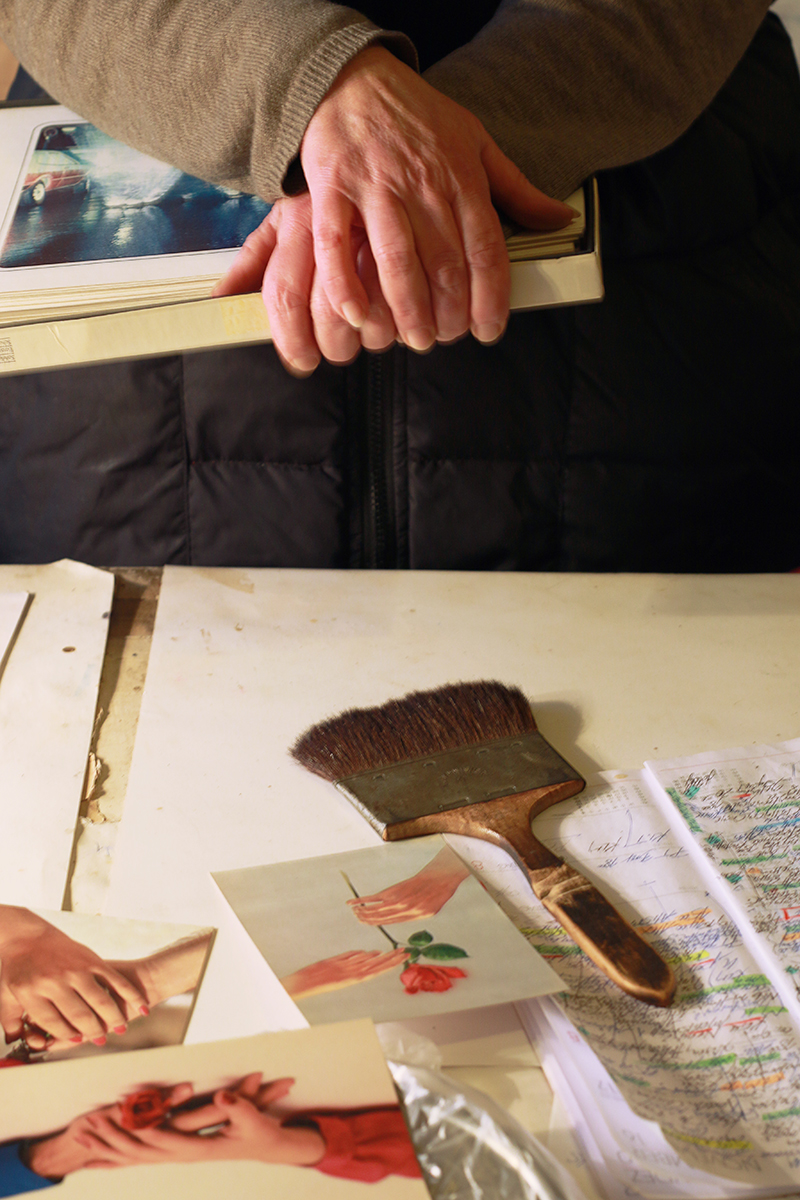 We move to another room, filled with framed prints and sculptural works. The photographic documentation of Frenzel’s performances stand alongside various paintings and sculptures she has produced. The photographs offer a moment to meditate on the transformation her body undergoes in various rubber and plastic skins. Frenzel describes her interest in making movement plastic, akin to a sculptural form. Nearby, her light sculptures sit atop a flat file in the space. ‘Lecksteine’ is a series of illuminated salt blocks eroded by the tongues of cattle. The white, solid forms have the appearance of smooth, carved bone. Frenzel shows images of her installation ‘Lichtwiese’: several fiber-optic strands atop long metal stems create an illuminated meadow. The pieces are too large and numerous to be stored in her Berlin space, but nonetheless the work is present in her archive.

At the time of our visit Frenzel was not actively producing new projects in her studio, as she is currently experiencing a destabilizing change in her life. I ask her how the archive functions in her practice. Revisiting archives is as integral to studio practice as active production, especially in moments that require a pause, a creative gestation period. We have a discussion about the possibility of a publication of her works; this retrospective would be an important document providing insight into the Berlin art scene of the 80s. Frenzel is among a cohort of female artists whose practices attest to a kind of liberated experimentation, a rich lineage that many newcomers to the city may not be aware of. The curator Alexandra Weltz-Rombach took an interest in Frenzel’s work as a way to revisit the Berlin of the 80s and 90s. Frenzel’s recent exhibition ‘Ich bin ja eine verdammte Träumerin (You see, I’m a damn dreamer)’ at Weltz-Rombach’s Galerie Auslage in Kreuzberg this September during Art Week provided visitors with a reintroduction to Frenzel’s decades-long career. 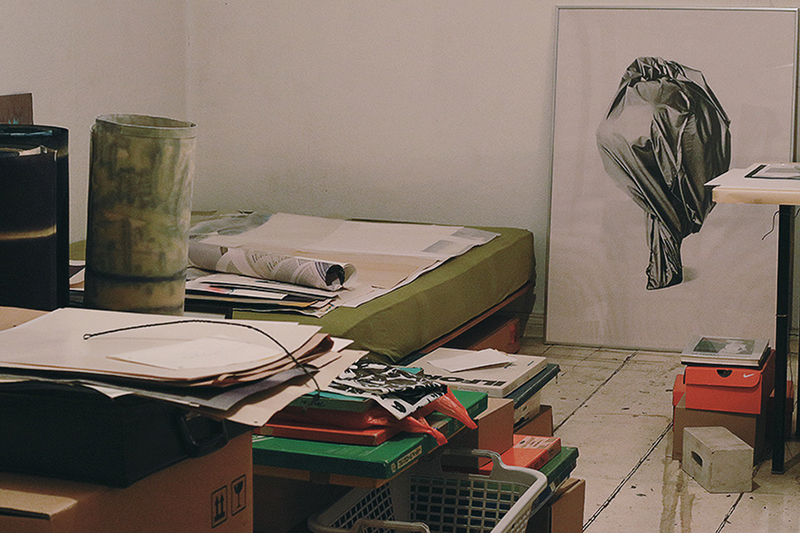 When we return to the table, I notice the many colorful ink experiments framed around the space. Frenzel shows me an orange can of propanol, and she describes the way that the chemical interaction with the ink or markers make it bleed on the paper. These prints add a beautiful, colorful notation to her photographs and performance work, another kind of gesture. Frenzel worked as an apprentice in lithography, and her material knowledge comes through in her approach to printmaking. I see an interesting reflection of forms in her prints and performances: the ink bleeds and takes on a variety of shapes, while the body transforms and mutates based on material/environmental enclosures. Near her work is a painting done by her father. She shows me a catalogue with some of his landscape paintings. Frenzel is also the keeper of his artistic archive. It is curious to see the confluences of two related (familial) artistic practices, and in what ways they diverge. It seems that the pastoral environment has come into each of their works in its own way. 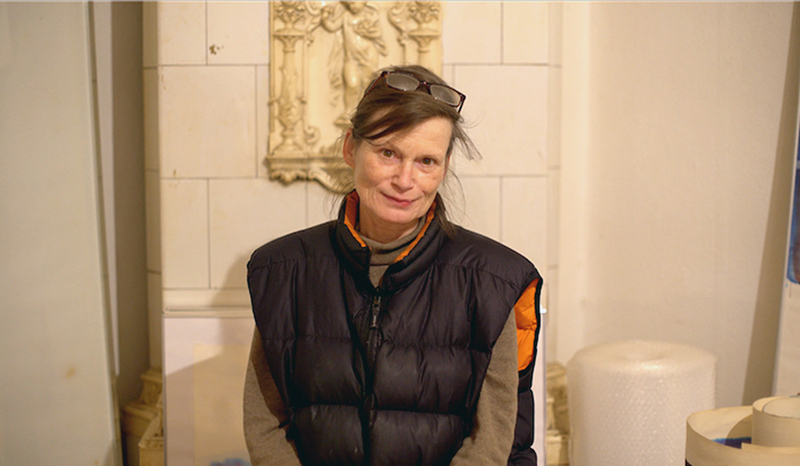 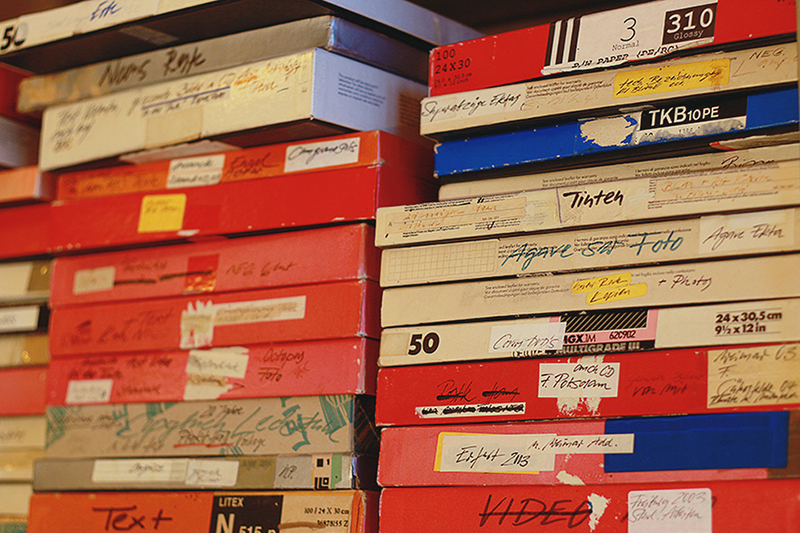 Frenzel comments that so much art has been produced, and continues to be produced, that maybe there is too much stuff out there. I agree with her, to a point. We could stop producing so many new, consumable material things. At the same time, this agreement comes with a qualification: there is so much artistic representation that has been buried or erased under a Western art historical cannon (contemporary curators are no exception), and perhaps what needs to happen is a preparation of space for those under-heard voices and visions to be amplified. For this, we need artists who are acutely aware of what it takes to create an environment of solidarity where experimentation is unimpeded. A reimagining of what an artistic practice looks like, establishing new modes for collaboration and mentorship instead of producing objects for an all-consuming market. I see in Frenzel a perseverance: it is no easy feat to turn an idea or vision into a reality with that degree of dedication and life-force involved. Her embodied experience is one of deep knowledge, one that many young artists coming to this city could learn from. 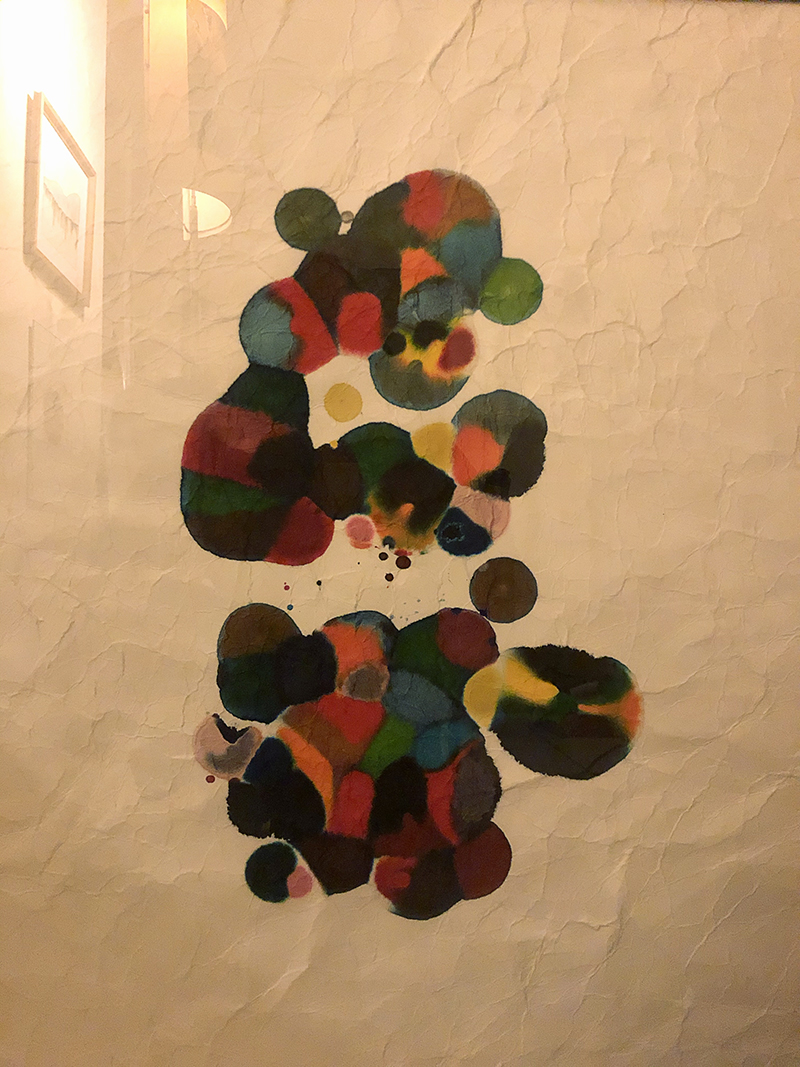 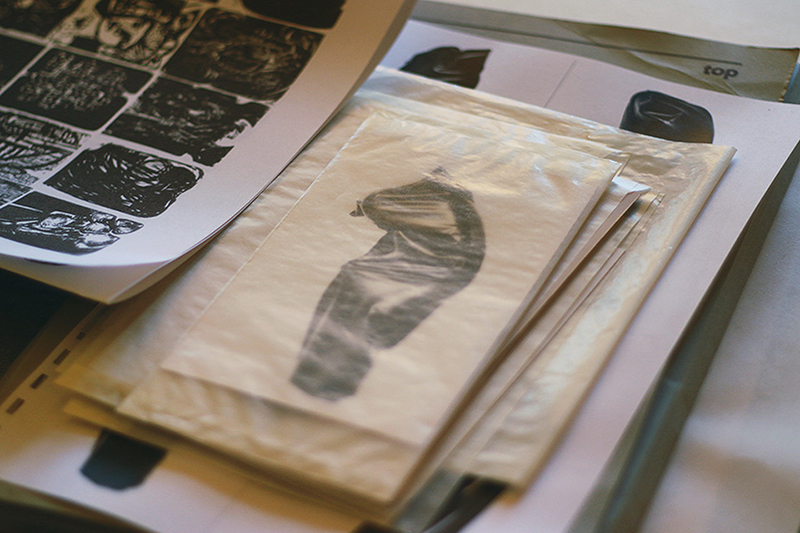 As I am about to leave Frenzel’s home, she turns on a lamp in her living space. The lamp is a small unassuming object—a coconut attached to a painted Cola can—but it produces a great amount of light. She purchased the lamp on a trip to Turkey in 1989, where her work was selected as part of the exhibition ‘Berliner Künstler in der Türkei’. I feel lucky to participate in this gesture of remembrance, and to learn that Frenzel has hopes to exhibit again in Istanbul. While walking back to my home through Charlottenburg, I hear echoes of salt accumulating and recall Frenzel’s performance piece ‘Aquamoving’. She moves under water while encased in a plastic sac, struggling, but serenely, and eventually breaking free. Here, I reflect on the many metamorphoses people are capable of, provided suitable conditions and space.