On a cloudy December day, I arrive at Rafaella Braga’s studio, located on a quiet street in Treptow. The walls of Braga’s space are brimming with large-scale canvases, the ceiling is dotted by pendulous stars and winged creatures, appearing as if catapulted out of a mystical dream. 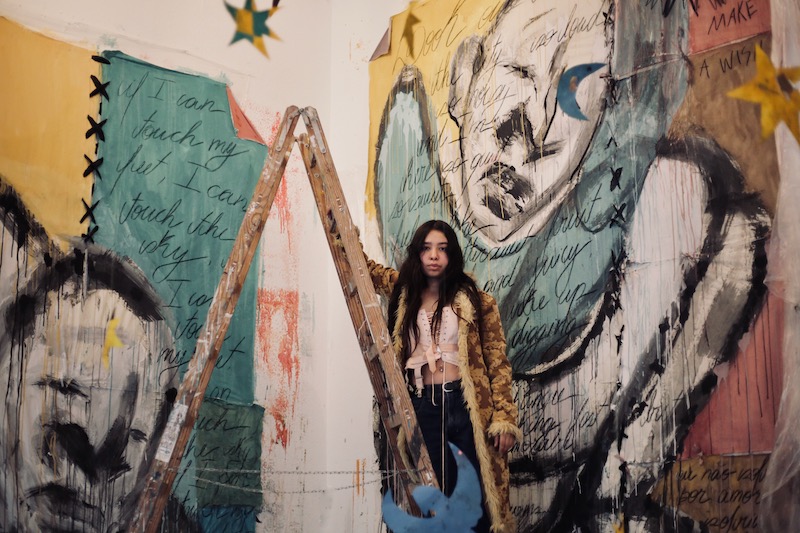 Born in Goiânia, Brazil, the artist eschewed academic education and worked multiple jobs in order to sustain and trace her path, beginning with graffiti and, after a tumultuous adolescence, ultimately finding shelter in painting. Braga, disheartened by the few opportunities that her homeland could offer at the time, seized the moment and moved to Berlin in 2018 in search of new experiences and inspiration. In the studio, we sit around her desk—piled with art supplies, rose petals, fruits and sketches—facing the wide room, lit by the adjacent window. 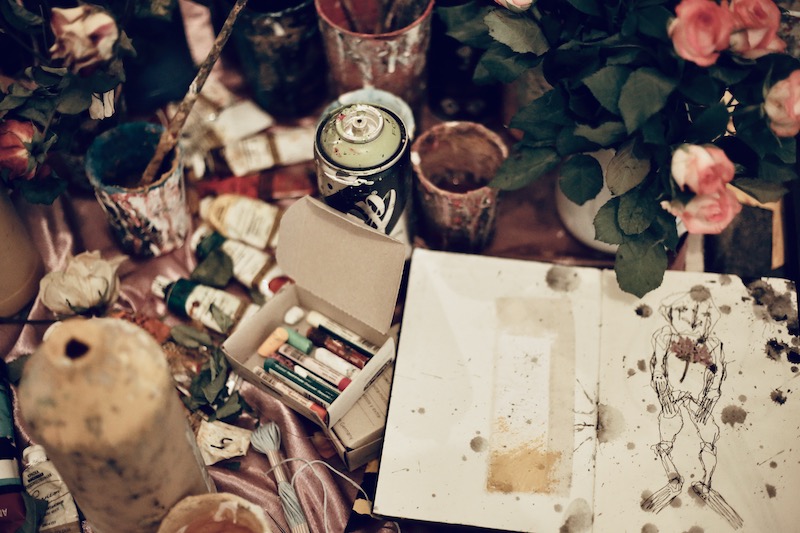 She narrates her daily ritual. “Once I’m in the studio,” she says, “I put on a hip-hop track and I eat while looking at the space in search of inspiration.” She stands up and leads me to look at her current series up close, while carefully trying not to trample on the unframed canvases covering the cement floor.

While examining her work, I can’t help but notice the similarities in the subjects and their recurrences. She explains that the genderless figures inhabiting her world are a survey of the self and its relation to the outside, while the space surrounding the figures represents the expansive sky. Painting is now Braga’s main source of income in Berlin, which allows her to spend most of her time creating. Yet she defines herself as a low-income artist: “I am part of contemporary art culture, which is sadly male and white-dominated, and I always learned how to be resourceful in my process.” 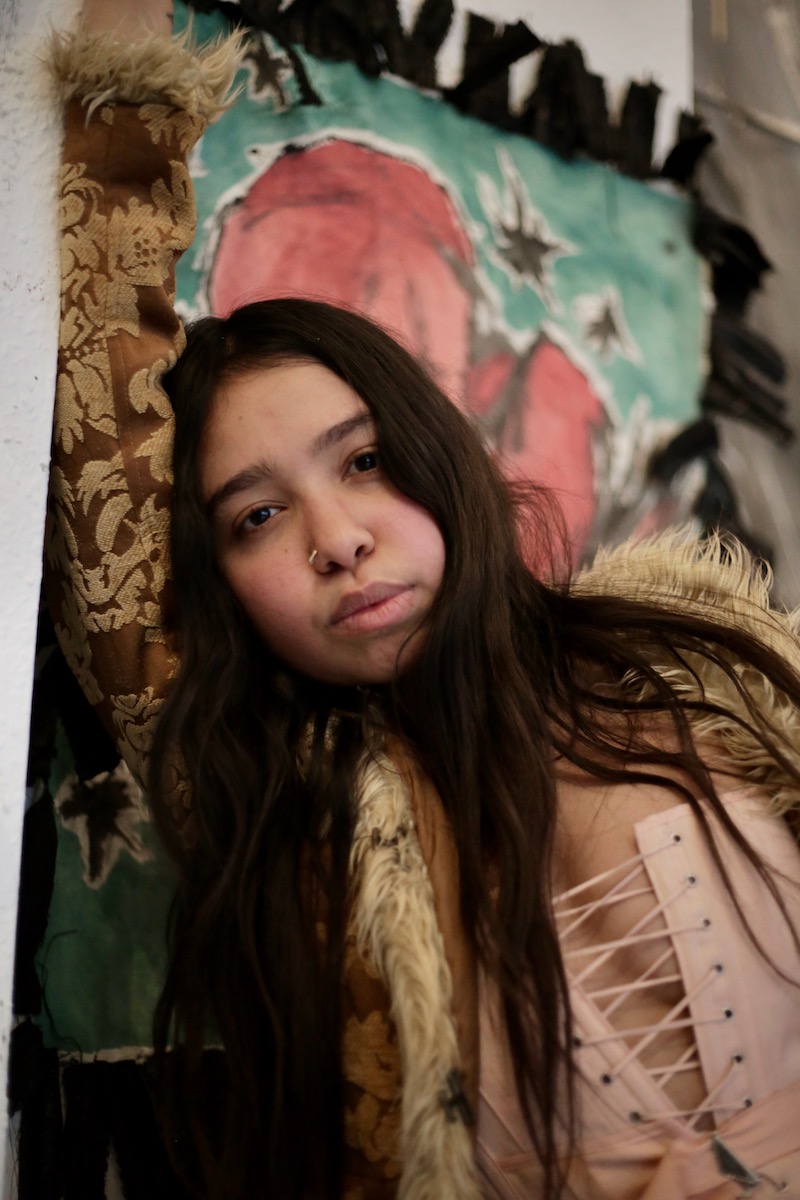 Braga enjoys experimenting with various materials and her ability to improvise and take advantage of every available resource has meant that her works are often inexpensive to produce, and make use of extensive re- and up-cycling. Her works are characterized by strong colors and fabric combinations, with text added and canvases stitched to one another to elongate their size. Her technique is distinctive, the brushstrokes are tenacious and brutal, revealing a physically intense working method, which she explains is part of her healing, converting fear into love. Turquoise, orange and beige are omnipresent, while the subject is often outlined in black. 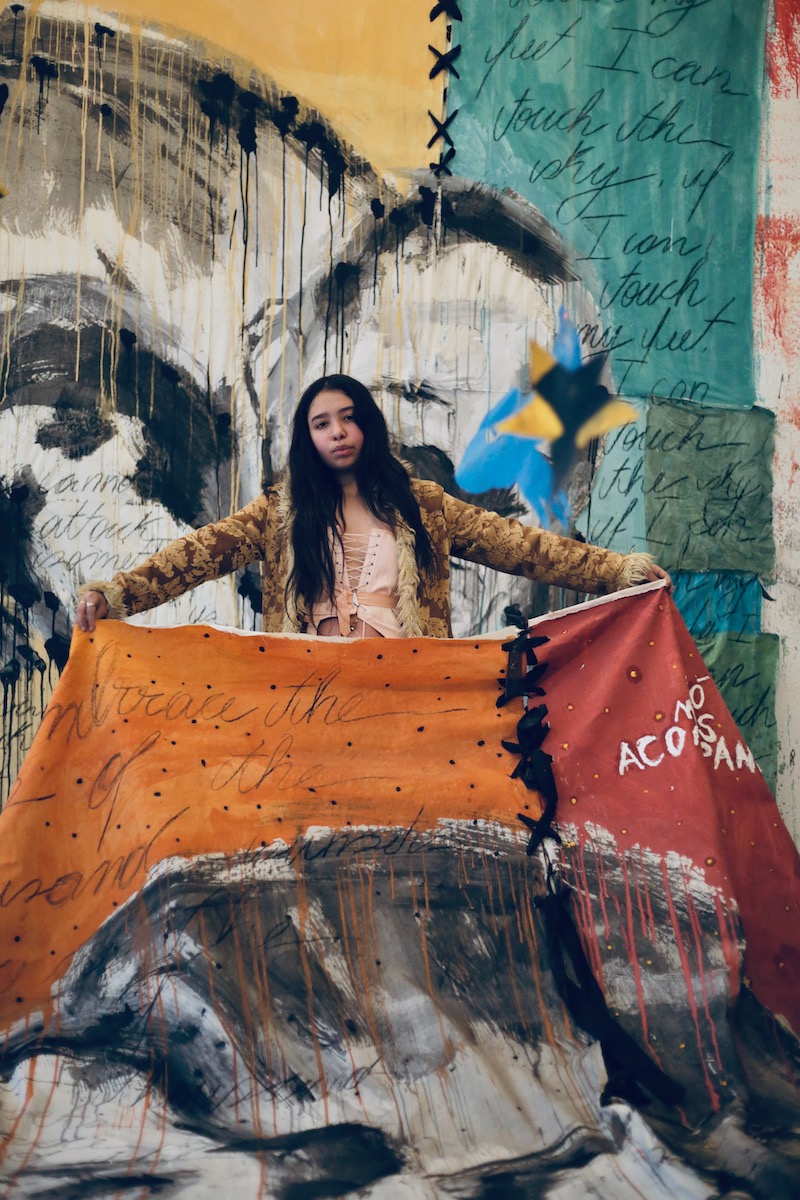 Moving closer to one of the works arranged on the wall, ‘Caçando Estrelas’ (meaning “hunting for stars”), she points out an overlaid quote with her index finger that reads, “You cannot attack something that is in the state of a dream.” She then clasps a charcoal pencil and gracefully illustrates her calligraphy. “I write mostly in Portuguese, but sometimes also in English,” she explains. “I treat the canvas like a diary, an attempt to transcribe my inner thoughts.” A hefty wooden ladder sits in the corner next to buckets saturated with color. She shows me the DIY extendable paintbrush that helps her reach every part of the large-scale works. 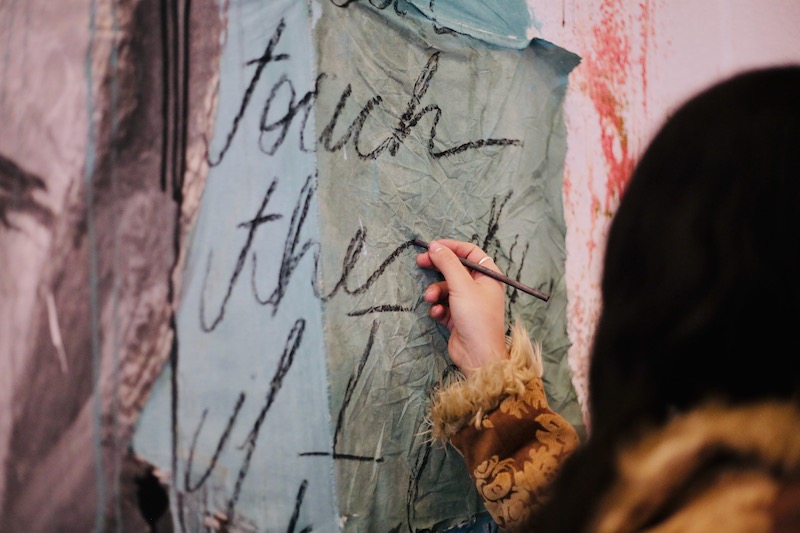 At some point, she removes her Nike sneakers and leans on one of her canvases while she describes the black ornaments accurately stitched on the outline of the work. This technique is intended as a means to adorn the canvas while creating a floating illusion. Braga explains that, due to the vast dimensions, it is inconvenient to frame her creations, and it makes the most sense to just fold them, as they are simpler to ship for potential buyers. Despite being based in Berlin, the artist primarily sells her works outside the German capital. She is currently represented by the São Paolo–based gallery HOA, founded by Igi Ayedun, the first Black woman to own a gallery in Brazilian art history, a fact worth considering. HOA embodies structural changes around how art in the Latin American territory is created and perceived, giving space to LGBTQ+ artists of color to pave the way for a decolonized Brazilian art world. The gallery displays themes of healing and resistance, particularly pertinent topics in a nation that still lives in the shadow of systemic racism and a neocolonial presidency. 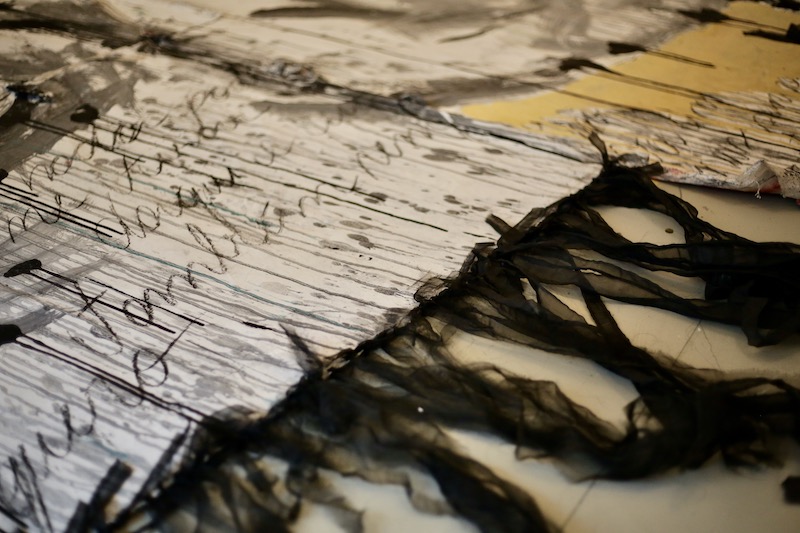 We stand up and she begins rolling down the canvas to reveal another to explore the full series. I ask her opinion about being a woman in the art world and she tells me that she doesn’t identify with the softness of the stereotypical femininity depicted by patriarchal society. “I do not want to fit into a forced gender box,” she says. “The figures that I draw are neutral, open to interpretation, but they still unveil their deepest emotions, a pure softness that is uncontaminated.” Her work acts as a site for healing, a space of change where she can transform and contemplate. 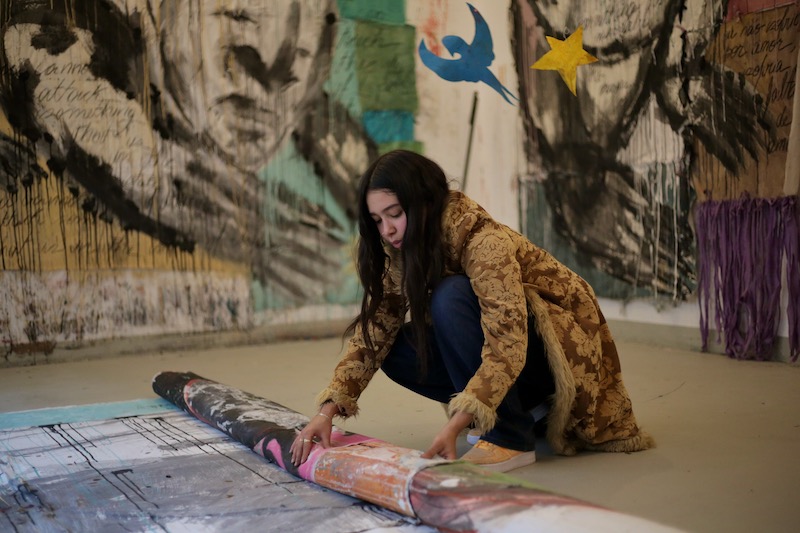 The studio is a sacred arena for Braga. Security in her work environment is paramount, and she attentively creates a surrounding in which she can reveal her secrets. The artist confesses to me that the creative process helped her overcome depression. “To me, painting is a necessity, a therapy. The bodies I create are a reflection of different narratives, my own, and the strength to transform wonders into a new reality, a magical one,” she says. As we get closer to the desk, she reaches over to her phone to play some Lauryn Hill. I notice her unique style, inspired by the early 2000s music wave. As she gently reaches toward the drawings in the sketchbook on the cramped table, I can see how despite the crammed surface, there is intention and precision in the chaos. 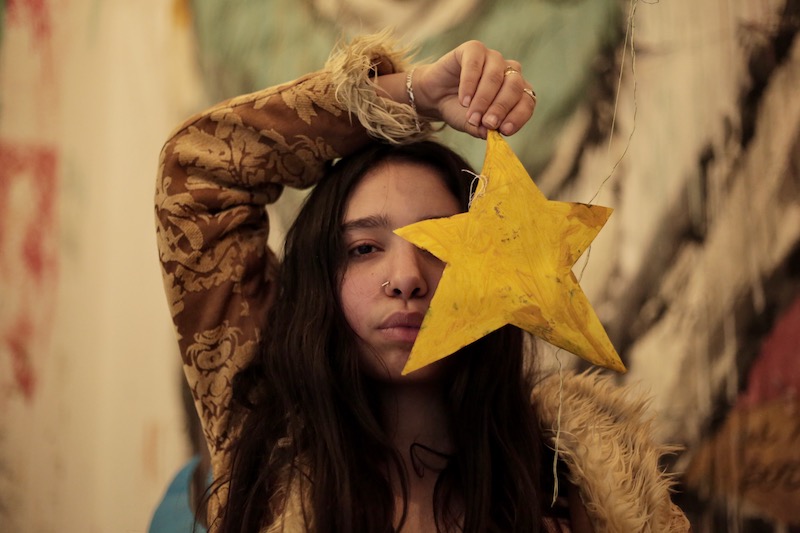 Nostalgic for sunny origins, we commiserate about Berlin’s frosty weather, pandemic restrictions and the inability to travel. I take advantage of the last rays of natural light to finish taking portraits and to admire the colossal series occupying every inch of the studio, despite the fact she’s only been working there since September. Braga starts to prepare the room for the afternoon of painting ahead. As I walk towards the bus station, holding my coat tightly against the cold wind, I feel inspired by Braga, already envisioning ways to transform my feelings from this precarious and tumultuous year into something beautiful.