Kraupa-Tuskany Zeidler is known for displaying emerging artists who attempt to break modernist traditions, with a post-internet art program that is absorbed in the current debate around speculative approaches and digitalization operating on the edges of linear understanding. Among these is multidisciplinary artist Klára Hosnedlová, whose first solo exhibition in Germany, entitled ‘Nest,’ is currently on display at the gallery. 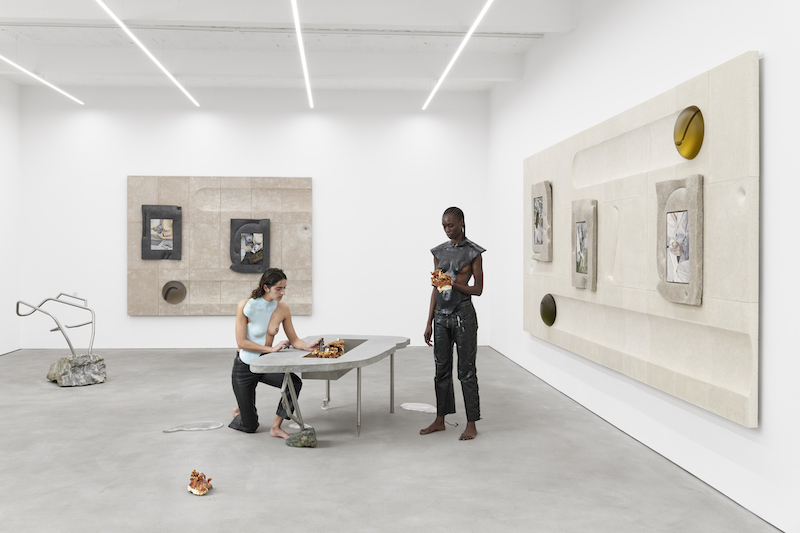 Born in the Czech Republic and now based in Berlin, Hosnedlová conducted an extensive investigation around Ještěd Tower, a 94-meter-tall television transmitter built on the top of Ještěd mountain during the Soviet regime. The tower is a historical monument made of reinforced concrete, shaped in a hyperboloid form, its design combining the operation of a hotel, a weather station and a transmission antenna. What was once a prototype of high technology and social communication is now a memento, making it one of the dominant features of the North Bohemian landscape. 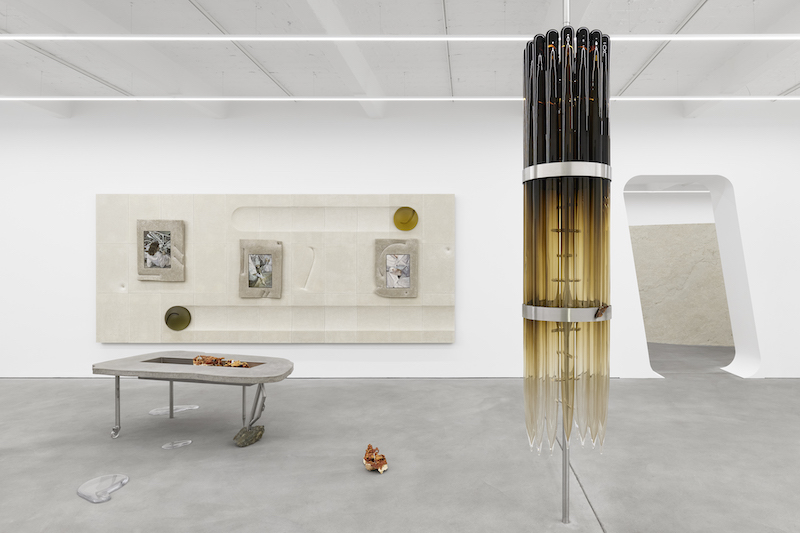 Hosnedlová—inspired by all the elements of the Ještěd Tower—recreated a retro-futuristic, sci-fi scenery where characters and installations are meticulously rendered in the art space, creating a simultaneously nostalgic and future-oriented sensation. The exhibition, curated by Sarah Johanna Theurer, is installed throughout two connected spaces and examines our estrangement in late capitalism, and the idea of the future as a secure nest. The untitled series consists of glass and wall sculptures, knitted cotton thread images mounted on tinted terrazzo cast, generating a color and depth illusion. In the first room, the works are aligned with attentive precision, complementary earth materials reminding us of the mountain region. 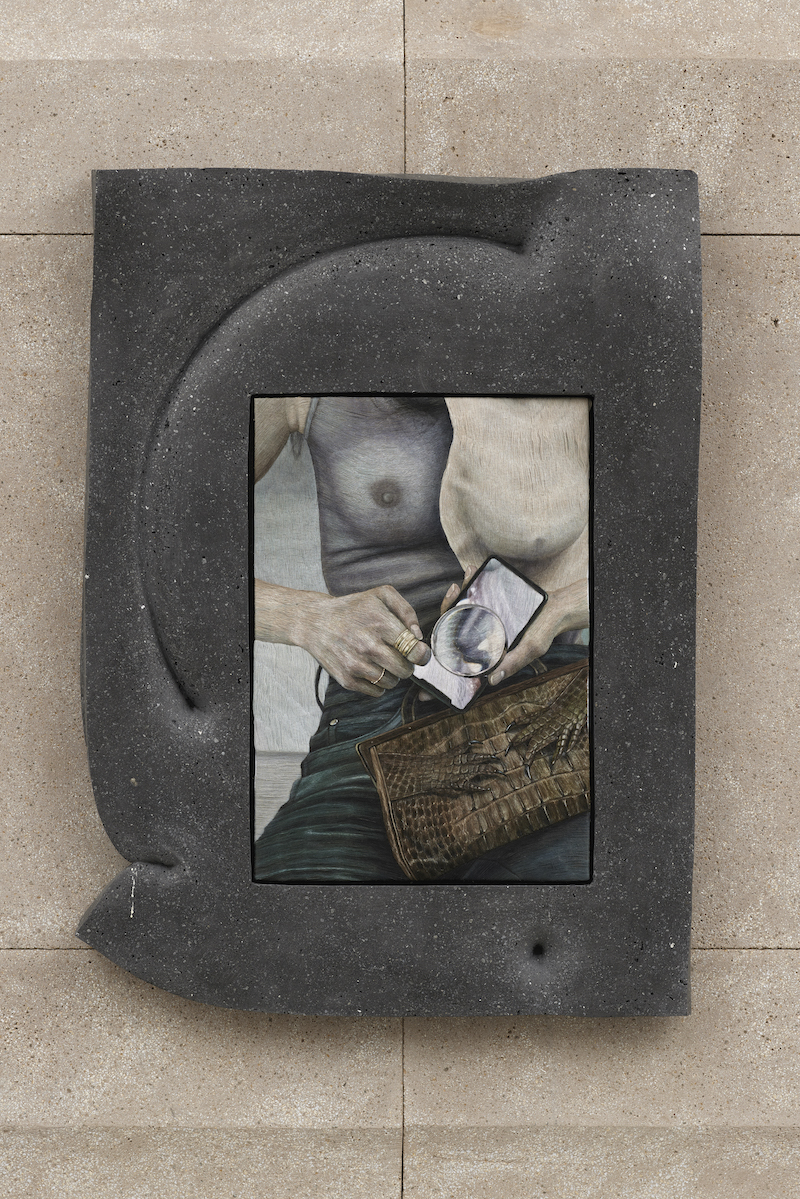 A gradient handblown glass pillar reflects light, analogous to the transmission antenna of the tower. Adjacent to the sculpture, we find a table where artificial mushrooms are inserted and, on the floor, water shaped puddles are placed. A Sphynx, magnifying glasses and a knife whittling a wood stick are all immortalized in the image series. The work follows a group of friends performing bizarre scenes of connection and broadcast, as a metaphor for the concrete tower and terrain. In the next room, we discover a sleek, highly-designed bench, propped against a white semi-circular wall, where we can rest and contemplate the image in front of us. Molded leather harnesses and corsets are worn by the artist in the live performance and also by the friends in the vignettes: this is where contemporary fashion and futurism are combined. 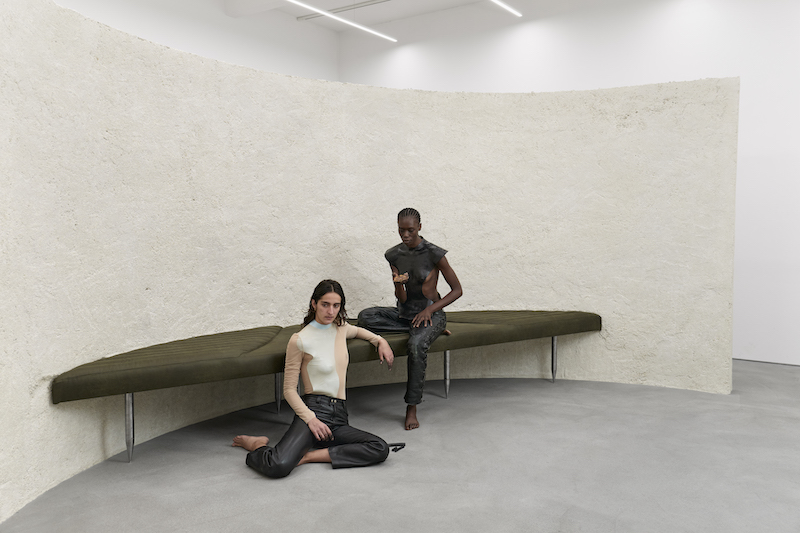 The exhibition feels like being launched into a visionary spaceship, in which people are searching for connection and re-enacting a series of terrestrial activities. Yet, the spaceship stands still, motionless, mimicking the failed idea behind the Ještěd Tower. ‘Nest’ stands for a nurturing habitat, yet the atmosphere is alienating: an analogy for the compulsive desires of postmodern architecture and technology, as they morph into social isolation and denial. In this solo exhibition, Hosnedlová labouriously intervenes in the space and probes some of our deep feelings of longing, the sculptures reflecting on both the allure and the disappointment encapsulated by the Ještěd Tower. 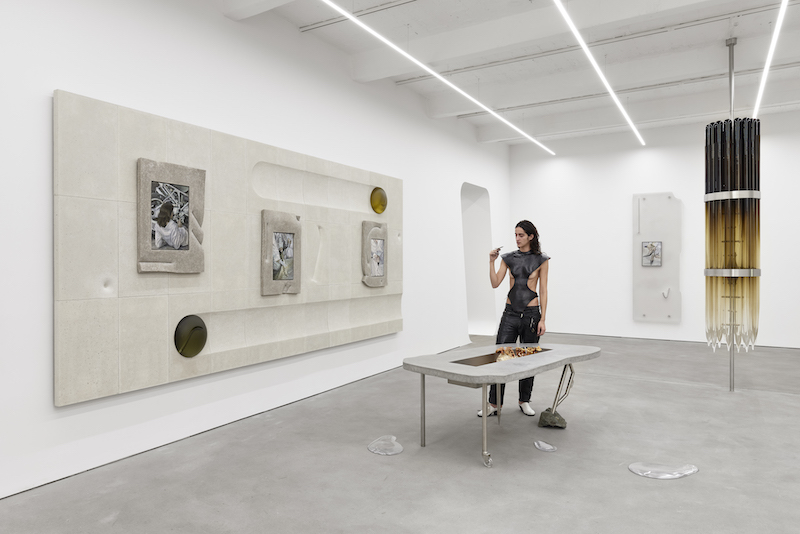