Wang is a Beijing-born and Berlin-based illustrator, painter and visual artist. Inspired by a trip to Europe when she was younger, Wang decided to study Visual Communications at the Berlin University of Art (UdK). She continues to live and work in Berlin, frequently citing the city’s positive effect on her work. Wang’s practice evolves with every piece she creates, with works gathering momentum from one another. While her work has yet to settle on a single medium, there is a clear link throughout: play. No matter the medium, Wang’s work is often full of levity, depicting colourful characters engaged in strange antics. Her bespoke colour palette has become identifiable as she frequently pairs pastels with bold primary or neon colours.

Wang describes the themes in her work as focusing on time, movement and energy transformation. Movement often features in her work in a literal sense, as she combines still imagery with animated gifs. Since 2014, she has produced collages with animated features, which remain a core facet of her work. Wang’s graduate project, ‘Gravitational Waves’, is an interactive audiovisual animation performance in collaboration with sound artist Xiaolu Yu. Wang describes this work as animation combined with generative art. The aim of the piece was to create animation “in which the movements are not predefined” but rather controlled by the volume of the live audio. This results in unexpected scenes and transitions, as well as profound connections between animation and environment. Wang’s description of the content is that it changes between “the perspective of god and civilian” in order to capture “the feeling of realness and unrealness, and the result of disorder and coherence.” This pursuit of serene, surreal chaos is one that appears throughout Wang’s artistic practice.

‘Diagrammatic cross-section of a cantaloup’ from 2016 captures another powerful aspect of her animated work. Its unusual use of colour and simple lines captures the transfer of energy in a domestic environment. This work illuminates the forced connection between the nature and domestic space. Texture is at the forefront of this piece. Each element of the work—counter-top, chopping board, wall and cantaloupe—are separated only by their textural elements. At the centre of the work, the inside of the fruit oscillates, separating life from its environment. Wang captures the transfer of energy between food and its consumer, and domesticity and nature. While it doesn’t feature the colour palette Wang comes to rely on in later work, it harbours the joyful serenity at the centre of all of her pieces.

Wang’s pursuit of absurdist narratives appears in most of her work, the climax of which occurs in a piece named ‘Hedonist’s Dream.’ It features an animated figure dressed in a pinstriped swimming costume, lifting a decapitated body and a rock above their head on repeat. Framed in a neon rainbow square, the figure flashes from pink to blue with each lift of its arms. The frantic nature of the work is offset by the tiny smile on the figure’s face, reassuring the viewer that this is how things are meant to be. The loop of the animated work results in the hypnotic feeling of planned chaos unfolding before you. Wang’s aforementioned pursuit of “disorder and coherence” are realised in this work.

Wang’s diverse catalogue of work allows her work to translate pieces between mediums effortlessly. Her recent collaboration with Nike is a culmination of her work to date. It combines her signature colour palette, as well as her simple human figures, with the classic Nike shoe shapes, Blazer ’77, Air Force 1 and Air Max 90. The illustrations on the shoes depict humans living in harmony with nature and their surroundings. This collection debuted in September 2020 and is inspired by humanity’s ability to coexist with our natural environment. The collection is sustainably conscious, with each pair being made from 50% recycled leather fibre. 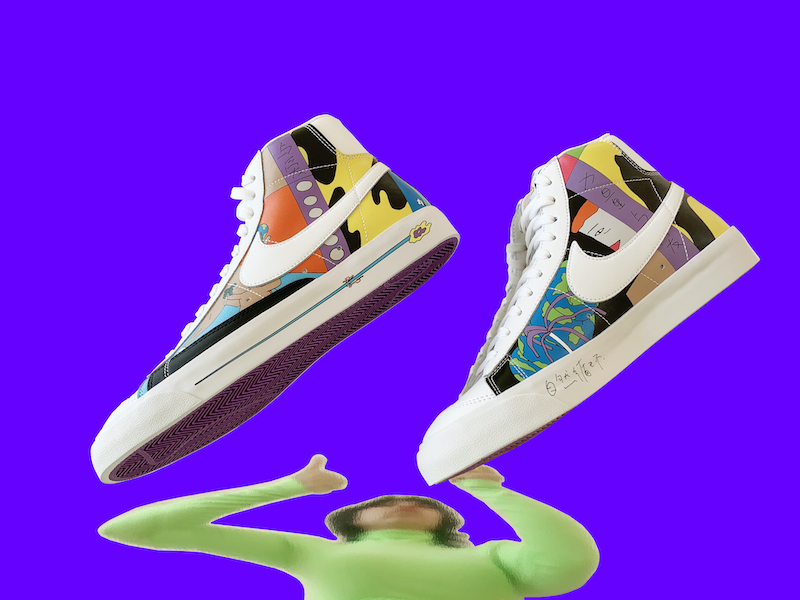 While it varies in medium, the work is refreshingly absurd and always surprising. At first glance, it can feel overwhelming in its pace and colour but with a brief examination it offers a space for reflection. The interdisciplinary nature of Ruohan Wang’s work has resulted in the creation of a world where formless beings, bold colours and humour are at the centre. Her exploration of uncanny narrative is blended with an earnest examination of our impact on our immediate environment.