“Berlin’s newest landmark” is built on smoke and mirrors, a space of feigned criticality that purports to promote a narrative of cultural exchange and debate. While, recently, there has been a widespread dismantling of physical sites and monuments—along with the malignant historical myths they perpetuate—the Humboldt Forum attempts to implement a kind of gaslighting, (re)constructed on foundations of colonialism and cultural supremacy. Underlying the Humboldt Forum’s performative gestures are organizational and funding bodies who remain in willful denial of this institution’s (and Germany’s) colonial history. The Coalition of Cultural Workers Against the Humboldt Forum (CCWAH) brings awareness to the myriad of problems surrounding this institution and its methods of cultural and financial extraction.

CCWAH acknowledges and supports organizations that have long been active in resisting the Humboldt Forum, including Decolonize Berlin e.V., Berlin Postkolonial, No Humboldt 21, Decolonize Berlin Alliance, AfricAvenir, AFROTAK TV cyberNomads and Barazani. If cultural workers are in the position to (re)shape the spaces where their creative labor is invested, and divest from institutions that remain obstinate in the face of abusive practices, then the campaign slogan “I Don’t Participate” becomes the most logical option. 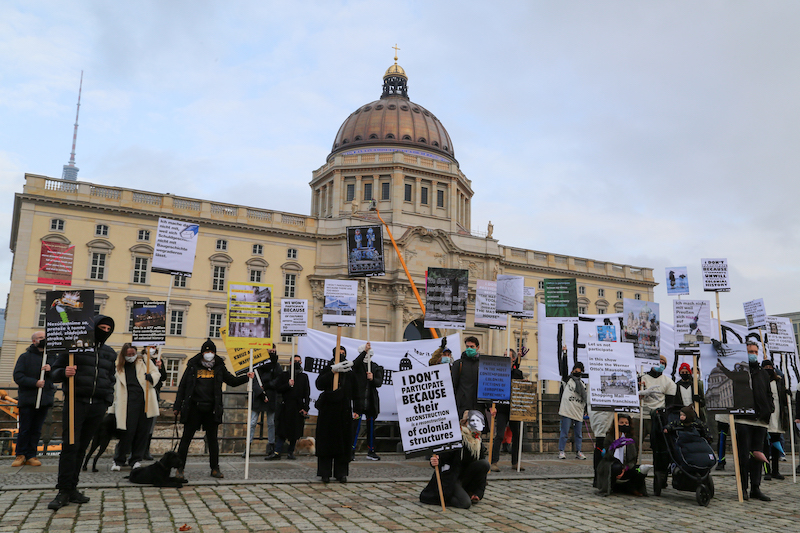 Noelle BuAbbud: Can you speak a bit about how CCWAH came together?

Coalition of Cultural Workers Against the Humboldt Forum: The Coalition started in the summer of 2020, when we held our first action as a group at Schinkelplatz. One could say the situation that led to us coming together began much earlier, in different places and contexts. In the group, we have people with various focuses, backgrounds or reasons for opposing the Humboldt Forum. The Humboldt Forum is a project that has been on paper and under construction for so long that it has gradually managed to get a lot of people outraged for different reasons.

In spring and summer, some of us for whom the project has always been unacceptable were shaken again by the news of the installation of the orb and cross, a symbol of global Christian domination, on top of the building’s dome. This was a wake up call to the fact that what seemed like an ongoing nightmare was now becoming concrete in the middle of the city. It started then with a few meetings to share this disbelief, and to actually do more research and gather information. Through this groundwork, it eventually became clear that the Humboldt Forum was also forcefully trying to monopolize the discourse around its own critique, making it very difficult to find clear information on the building’s history, its project and inner workings. The Coalition brings together different people with different kinds of knowledge in the cultural sector, who can hopefully make this kind of information accessible and expose the revisiting of this imperial and colonial project in the middle of Berlin. 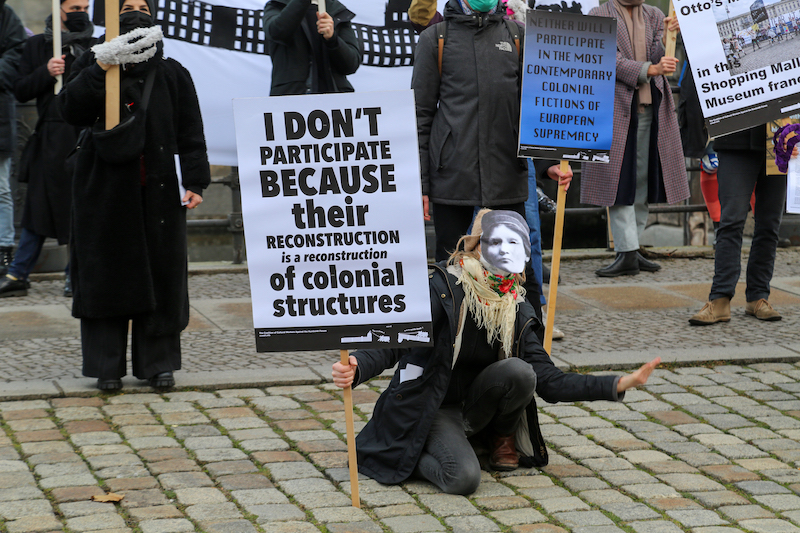 NB: CCWAH stages protests, referred to as ‘Rehearsals’ featuring the ‘Tear-Down-Ensamble’– how did this nomenclature for CCWAH’s actions come into the process of CCWAH’s protest and can you tell us a bit about what these events look like in practice?

CCWAH: We are rehearsing both the end of the Humboldt Forum and the qualities of the world we wish to build in its place. During these events, we return to our initial slogan “tear it down and turn it upside down.” The only option for the Humboldt Forum, we contend, is for its entire structure to be inverted in order to reverse the logic of its neo-colonial claims and bring the buried, troubled issues of its very foundation to the fore.

In our first rehearsal, we focused on the dismantling of the cross-bearing orb together with its accompanying inscription, which demands that “the living and the dead kneel unconditionally before Jesus.” The installation of the orb and cross at the end of the construction process, summarizes very well the vicious structures that underpin this building. The orb and cross was not part of the Bundestag resolution to reconstruct this Prussian palace on the site of the Palast der Republik and, therefore, was not decided on in a democratic forum. The cross was enabled by funding from the private sector, the contribution of one million Euros by the Otto Group, whose founder’s name, Werner Otto, is now inscribed onto the globe. In this way, the Otto Group and its subsidiary company, ECE Project Management, who have already devastated many inner cities with their dismal shopping malls, are permitting themselves the rhetoric of imperial divine right. That should be reason enough to understand who and what kind of interest is behind the reconstruction of these symbols of imperialist ambition and Christian dominance, but notwithstanding, they are built on top of artifacts stolen during Germany’s colonial era (1884-1919).

You see, the historical revisionism that is taking place in the middle of Berlin is unacceptable, especially at a time when in other places, colonial monuments are being toppled. The rehearsal, which included readings, performances, and songs, concluded with throwing a papier maché replica of the orb and cross into the Spree. 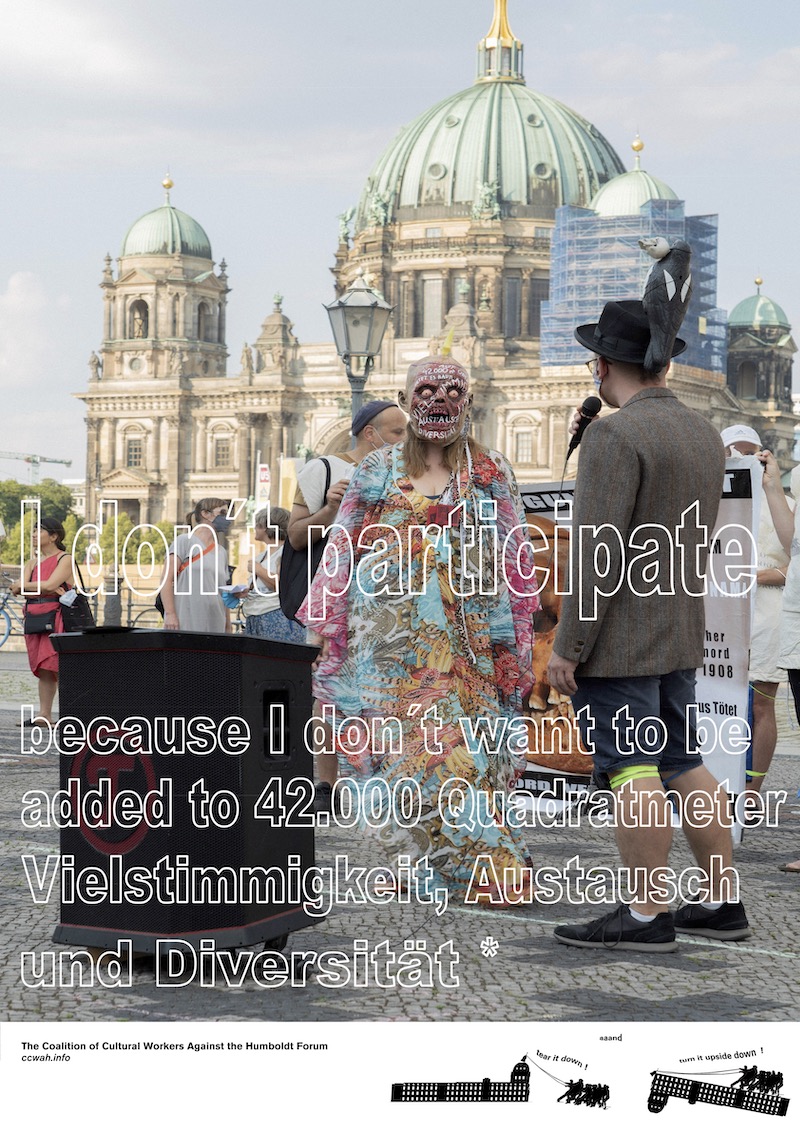 NB: CCWAH is building a comprehensive website, can you speak on how the ‘Layers’ section plays an important role as a resource for expanded education and research?

CCWAH: Following our idea that the Humboldt Forum needs to be turned upside down we started to think of the building in terms of layers – what each section of the building represents, its historical past and what is physically being built, moved, stored or buried. It is in these layers where we are putting together the research we’ve been doing. This is a very important part of the website, as it’s the place where the material we’ve been gathering will come into form and hopefully communicate to other cultural workers who could be approached by the Humboldt Forum for participating in their program.

Education and research is an important part of the work we do. The Humboldt Forum has adopted over the past years, before its opening, a public behavior of “critique swallowing.” It presents itself as the holder of ‘critique’ and ‘discussion’ by inviting critical perspectives inside their building as another looted object to their collection, and we take this very seriously, as this will keep happening from now on as their program officially starts. This attitude is especially threatening because by camouflaging themselves as a cultural institution, they are now harboring a huge part of the city’s funding for the arts, meaning money that could fund important practices elsewhere. Some of us in the Coalition already know colleagues who have been approached by the Humboldt Forum with work proposals involving large budgets. In the end, everyone needs to decide how and where to work; what we can do, in parallel to our defund and “I won’t participate” campaigns, is offer our research and position to other cultural workers, who could benefit from it or would also like to contribute to the work we’ve been doing. 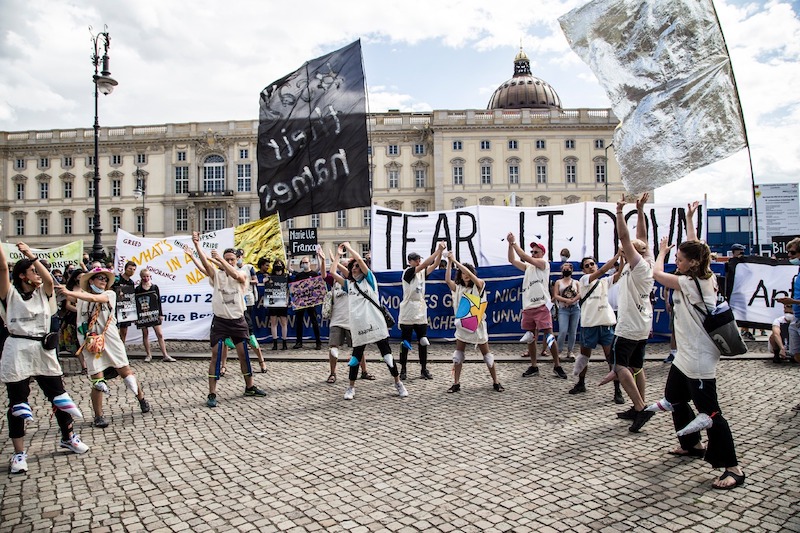 Coalition of Cultural Workers Against the Humboldt Forum: ‘7th Celebration of the Unnaming of M.Strasse,’ 2020 // Photo by Thabo Tindi

NB: Colonial power was gained (stolen) via oppressive extractive processes: this extends to the looting of objects and items of cultural, spiritual, historical significance removed from their context and provenance. How do we contend with the Humboldt Forum as a site of willful and violent reassertion of supremacy, a continuation of neo-liberal extractive practices?

CCWAH: We inform ourselves, talk to each other, create conversation outside of buildings like this. It’s difficult to say this now with the social restrictions, but getting together is so important. The reverberations of colonial power are things that so many of us struggle with in a variety of ways, and that’s why it’s important to talk to each other. Turning a building upside down is arduous. It’s physical, but also strategic. One needs to understand its workings. The advantage is that colonial and imperial practices are not something new, so we can look at history, gather all the different memories we have and keep moving, rehearsing. 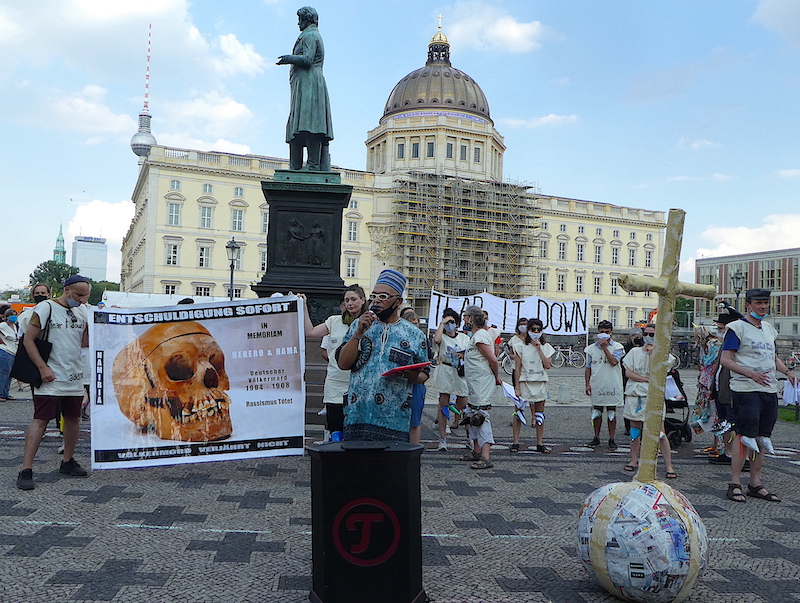 Coalition of Cultural Workers Against the Humboldt Forum: ‘Tear It Down and Turn It Upside Down, First Rehearsal,’ 2020 // Photo by Tanja Ostojić

NB: What critiques do you have in relation to the planned opening exhibition and the works on display, in particular?

CCWAH: We don’t accept the Humboldt Forum as a space of critique, so we will also not give ours to their program. What we can say is that we are here to speak to other cultural workers who are not willing to offer their critique to this imperial machine, but rather want to keep working on decolonizing outside of this building. There’s plenty of space and the discourse is there. Here is a statement we recently wrote, as a last word:

‘WARNING: The Humboldt Forum is looking to appropriate YOUR critique.

As with so many other Western cultural institutions, the Humboldt Forum presents itself as a container for public exchange. It attempts to establish itself as a forum ‘for all’: for debate, dialogue ‘between cultures’, the exchange of multiple perspectives, ’multidimensional visions’.

In short: it assumes neutrality. But a so-called ‘forum’ contained by a facade that was originally funded by the slave trade, it cannot ever be considered neutral or accessible ‘for all’.

When the Humboldt Forum stages a ‘debate’ on its website ‘for’ and ‘against’ an already-completed reconstruction of the cross and orb – symbols of Christian world domination – it pretends at neutrality. When the Humboldt Forum commissions so-called ’critical perspectives’ to spew out images of protest, including images appropriated from the Black Lives Matter movement, it pretends at neutrality. This pretence repeats the universalising gesture of Western cultural imperialism: a gesture that grasps to own everything, and that led to the theft of artefacts and bodies from ‘the colonies’ in the first place.

Thus please note: Cultural workers and others who seek to criticise this so-called forum ‘from within’ risk feeding its self-delusional attempt at neutrality.

We say: Defund the Humboldt Forum and redistribute the funds, now!’ 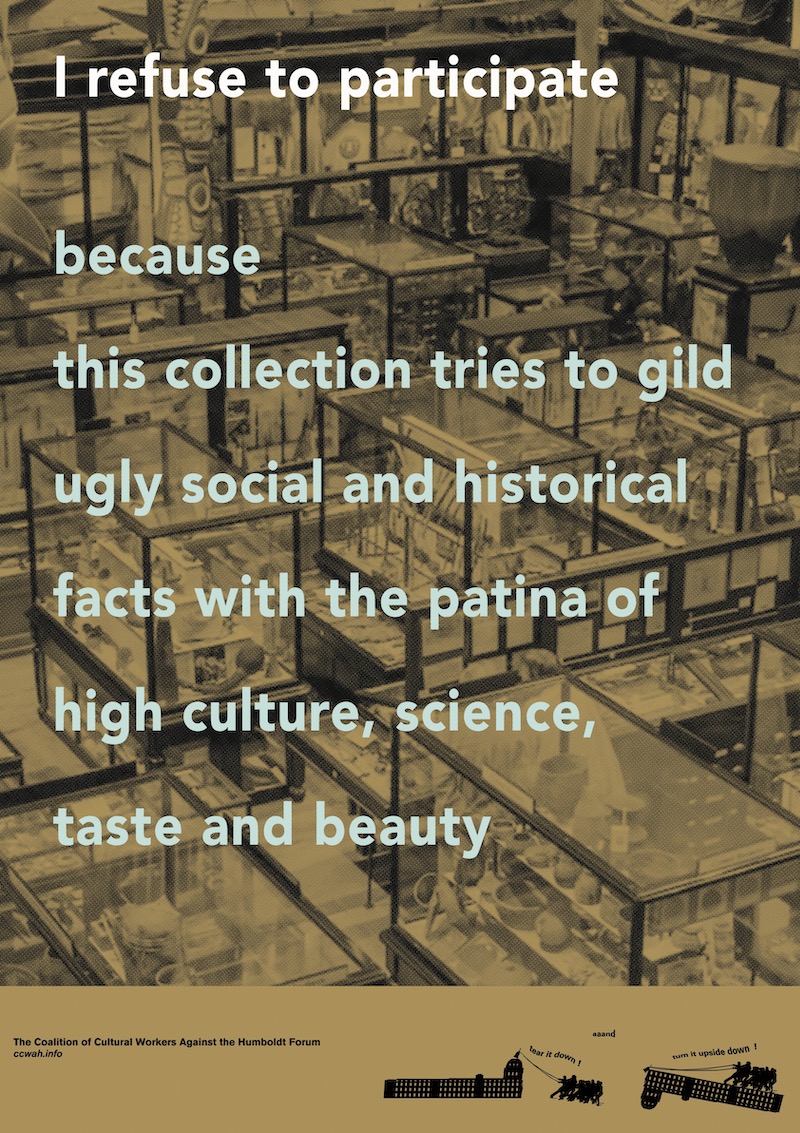