Sara Sejin Chang’s (Sara van der Heide) work engages with extractivism in a cultural and physical sense. Her latest film installation, ‘Four Months, Four Million Light Years’—recently exhibited at the KW Institute for Contemporary Art as part of the 11th Berlin Biennale—explores the experiences of those who have been separated from their families, ancestors, land, heritage and tradition as a result of international adoption. The film appears centre stage in a darkened room, bordered by 16 textile and paper banners, as well as a number of watercolours. The work is an ode to identity and place, and the colonial dynamics of cultural extraction.

Born in Busan, South Korea, Chang lives and works between Amsterdam and Brussels (and is considering moving to Berlin). Her work often approaches contemporary issues from a meta-cosmic position, drawing from her own experience in pursuit of historical healing and belonging. Chang’s ability to communicate the immaterial renders her work a conduit between this reality and infinite others. 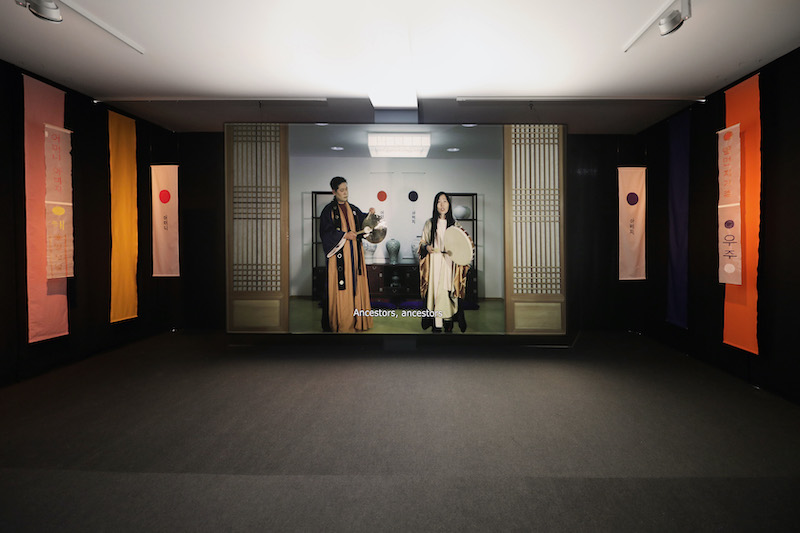 Aoife Donnellan: Let’s talk about your work ‘Four Months, Four Million Light Years’ from your ongoing project ‘The Mother Mountain Institute.’ What prompted you to make this work?

Sara Sejin Chang: ‘Four Months, Four Million Light Years’ was finalised in 2020, but the ideas, the images or, if one likes, one could call them flashes of images (like visions and messages) were coming to me and have been with me for already three or four years. I wanted to make a work that acts like a shamanic journey: it’s a journey that goes beyond concepts of linear time, an abundance of images and working with the ancestors. In this journey, we travel to several places, from the Korean War, to Dutch colonialism, to todays’ practices of transracial and transnational adoption. With this work, I wanted to unravel the colonial narratives behind transnational and transracial adoption and bring forward how inter-country adoption is rooted in the idea of missionary colonialism and part of the European so-called “civilisation” project to save the savage.

Today, adoption parents pay €10.000-40.000 per child and this Western capital completely destroys local care systems, like extended family. The adoption system has created a monster: a system that has forced mothers to give up their children, documents are falsified that state the relinquishment of the mother or even her death. Children are stolen, families are wrecked, sold to fulfill the needs of parents in the West. Adoptees grow up with the idea that their countries of birth are uncivilised, some literally called third world countries. The adoption industry thrives off these colonial images: on one hand, the image of the white saviour, who rescues the child from deep poverty, prostitution, the orphanage or even death, and, on the other hand, the image of countries deprived of everything. The adoption market has created a myth, a fairy tale, and each and every one has started to believe and reproduce these fairy-tales—including many adoptees—claiming to serve the best interest of the child. The (birth-)mother has been made invisible, mothers who keep looking for their children. I believe it is time we completely change the questions, bringing forward the real questions: what can we do in a global a-symmetrical world, to safeguard, the possibility that each child can grow up with their own mother, their own family, in their own country, with people who look like them, and have the same culture? With my work I wanted to unravel these myths, and create sustainable healing narratives. And, at the moment, the Dutch Government is one of the first countries to suspend all inter-country adoptions, and has also offered apologies to the adoptees. So this is a great step forward, hopefully this will be followed by other countries. 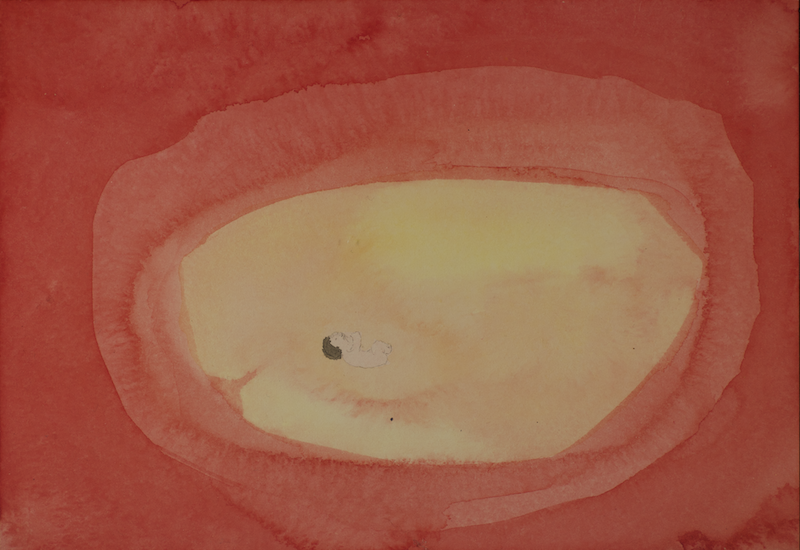 AD: Your work explores the effect of the forced disconnection between international adoptees and the important intangible properties of their birth culture. What effect do you think this experience has had on your practice?

SSC: With this work I wanted to offer repair or healing through the ruptured ancestral lines of displaced adoptees with the ancestors, family and country of birth. Adoptees have been violently separated from their birth country, from culture, and also people who look like them. Many adoptees have internalized that their lives started when they arrived in the countries by plane and their life has been a process of continuously adapting, and that is what the word adoption also refers to. In this process of adapting, something is lost as well. But there are parts that we carry within us, but that we almost have to deny. So for ‘Four Months, Four Million Light Years’ I have created a film installation that evokes the ancestors through banners, songs, drumming and drawings, and also brings forward the notion of animistic cosmologies. In this work I wanted to explore the existing ancestral connections, and bring them forward as guardians, as inspirations, narrators, and guides. To heal means to become one. As several shamans have told me, we (all) inhabit and are surrounded by our ancestors, even when we are not aware of this. 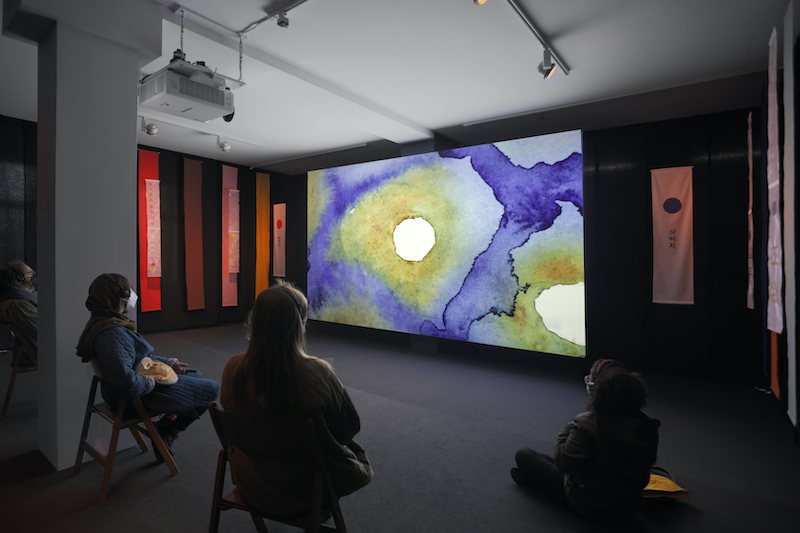 AD: In what way do you see the idea of “extractivism”—the process of extracting precious natural or cultural resources—as relating to your work?

SSC: Child quotas have been traded by governments from the Global North for access to certain economical markets or trading deals in the Global South. Children have been turned into commodities and are literally being sold to other countries. This question, especially in relation to ‘Four Months, Four Million Light Years,’ makes me reflect on the fact that one could almost see adoption as a dehumanizing form of extractivism.

But I guess this notion of extractivism is also referring to the idea of extracting spiritual knowledge as well as cultural knowledge. I try to be very considerate in regards to this, out of respect for the elders, the traditions and the spirits, as there is a very fine line, here, with cultural appropriation. But I would need more space to do justice to these complex topics.

AD: This work combines film, textile, cartography, music, and watercolour, among many other media resulting in an immersive journey through an interdisciplinary narrative. What sort of invisible processes are you trying to make visible with this piece?

SSC: The invisible support of one’s ancestors: a tool of repair in relation with the adoptee and their ruptured history, and connection with their country of birth. The unaddressed pain. But I also wanted to bring forward the invisible dehumanizing processes, which keep the public opinion falsely informed, and thus the adoption industry going. I also wanted to make visible how the Dutch national history, and that of other European countries, is partly responsible for the creation of war orphans, through participation in a ridiculous Korean War (many European and US soldiers participated in this deadly imperialistic war, and many U.N. soldiers became fathers of Korean war ‘orphans’.) Europe has to closely look at its destructive past, before performing the saviour. These processes are very important and healing, out of respect for everyone involved. 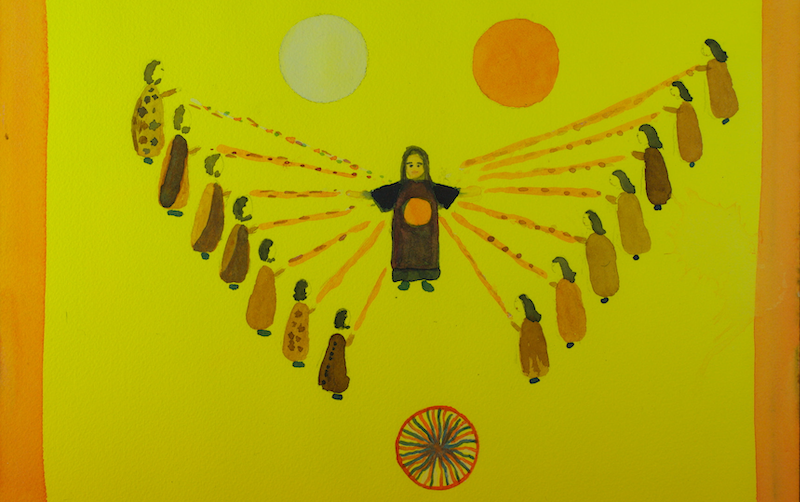 AD: ‘Four Months, Four Million Light Years’ combines historical documentation with the undocumentable. How do you collate the empirical information gathered during your research with the emotional, social, and ancestral understanding integral to the heart of your work?

SSC: Shamans can journey to other worlds of consciousness and time. One of the methods to do so is by imagining entering a hole in the earth, or swimming deep in the oceans and then you come out in a different world. In the film we “travel” through a hole in the ice and after we come out, we are in Northern Mongolia, in the setting of the Dutch 17th century colonial print of the first depiction of a shaman, by Nicolaes Witsen. I figured not everyone is willing to access an art work through a dark hole in the ice bringing you to another world and time, surrounded by drumming! So I offer several entry points to access the work: there is the Dutch 17th century historical archive material, that in a way gives the audience some grounding; like the Google map, as it strangely looks familiar. And I think you’ll need these elements because the rest is quite unsettling: the ancestors singing to you, because you are going to be born, then strangers are taking you away from your mother, and then life starts with the Korean War, and so on. There are all the layers and materializations simultaneously at play in the film installation, but also a wide range of emotions are touched upon, and I think to be able to feel each other’s emotions, each other’s joy, but also pain, is what makes us human and enables us to care for one another.