Throughout the years, New Zealand artist Simon Denny has built an atlas of the cultural and economic behaviours within the tech world by exploring and mapping aspects of capitalism, technological development, the internet, data collecting and international surveillance systems. For his recent exhibition ‘Mine’ at K-21 Kunstsammlung Nordrhein-Westfalen in Dusseldorf—a version of which is about to open at Petzel Gallery in New York—he investigated different aspects of extractive activities through the lens of art: extraction is analyzed not only as an industrial and economic process, but as a mindset that has forged a global modus operandi in contemporary society, affecting labour relations, individual privacy and the natural environment. The exhibition is a deep-dive into the ethics of mining for minerals and data, resulting in a presentation of extractivism as a whole paradigm of the human attitude towards the planet and other humans. 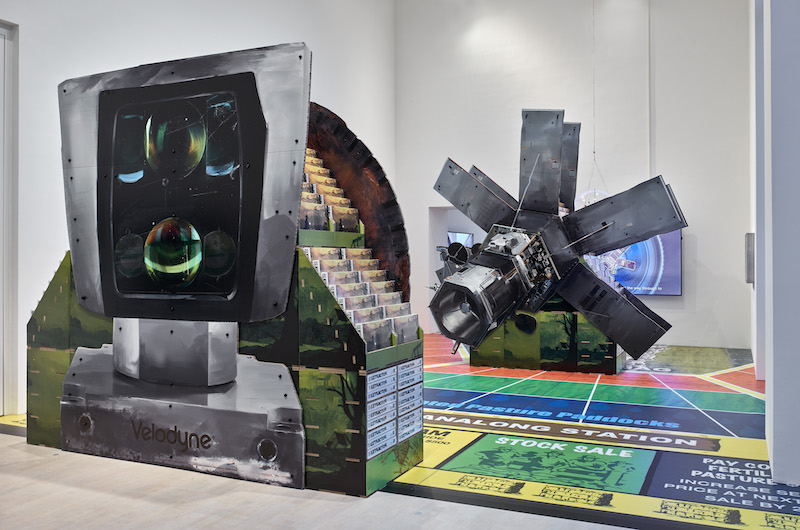 Lucia Longhi: By tracing links between digital extraction and physical extraction, you seem to embrace a vision where the two realms are strictly interconnected. Can you expand on this aspect of your research, and also say something about the choice of reproducing the exhibition for K-21 in the gaming platform Minecraft?

Simon Denny: I think there are material realities that are interconnected across both so-called virtual space and imaginary space or individual/collective human imaginaries. This was something the so-called “post-internet” artists were really into as well, which is why it seemed logical for us to make art about the internet but as objects in galleries and museums, not just as browser-only experiences. We were all on the internet—it was a core part of our discursive and social components of the practice—but we also made objects. These activities didn’t seem to contradict each other, rather to compliment.

I remember artist Daniel Keller saying on stage in 2012 at DLD, this tech conference in Munich which I made an exhibition about, “Your animated GIFs run on coal and your computers are built by slaves.” That was a kind of assumed norm for that group of artists; that this notion of the virtual that was often roped into conversations about the internet was in part a distraction and a misnomer. In ‘Mine,’ there’s a series of sculptures of automated extraction machines—from sales display units and board games to sculptures of mineral mining machines. There are also connections, as you say, to other non-human entities, aside from machines or ideas. Inside a sculpture produced from a patent drawing Amazon filed for a human worker cage, for example, is an augmented-reality bird, an animated model of the bird most likely to become extinct in Australia circa 2019. It’s a model experience of what it would be like to witness such a bird in a worker’s cage made by Amazon, for humans.

When I made the exhibition in Dusseldorf, I also made a version on Minecraft, a game that many very young people play and build worlds in. The logic of Minecraft is similar to the way people who look like me have tended to regard the haptic, material world at large: as neutral ground, a resource, to be taken for free and to make stuff from. It’s a simplified logic that is common in games, but Minecraft has a scale that is a significant reflection of that worldview right now. 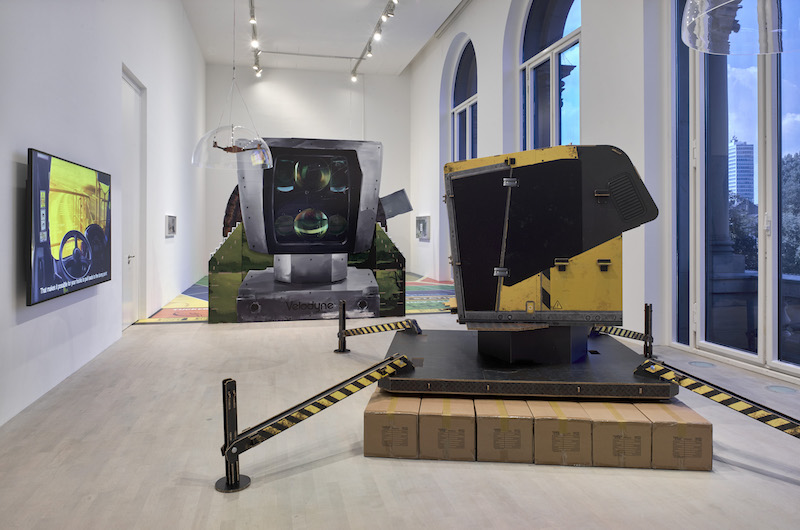 LL: Dealing with the current language and iconography of geopolitical power, your work depicts a sort of allegory of the global economic system. How do you manage to adapt your art to its task and prevent it from being visually didactic?

SD: This is a dynamic I think about all the time, and my approach has changed over time. Sometimes it felt right to overload people with information, be overwhelmingly didactic in various different directions for effect, but often not be straightforward with why the work was performing that function. I would often use an existing idiom—trade fair presentation or technology museum display—as a foil for an artwork that was actually doing something quite different from what those types of displays usually do. When you make a trade fair at MoMA PS1, and the trade fair presents itself as a kind of series of booths summarizing artworks, proposing simple didactics for what they were each supposedly doing, the effect is confronting, and confusing. The didacticism and seemingly direct sales pitch feels jarring in the context of a museum where you expect other kinds of language and aesthetic strategies to be at work. So there’s an emotional effect that is triggered by that confrontation.

Now I don’t use that strategy as often. Instead, I make work that contains a lot of material information, but is less verbal and uses fewer forms. It’s also less didactic, and more associative. I made Patagonia sleeping bags and Salesforce co-branded Patagonia vests out of silk scarves I acquired from the estate of Margaret Thatcher and presented them as sculpture and as framed objects, like collectables. These contain information about histories and ideologies through form but deliver the feeling of that material without as much of the sales pitch. 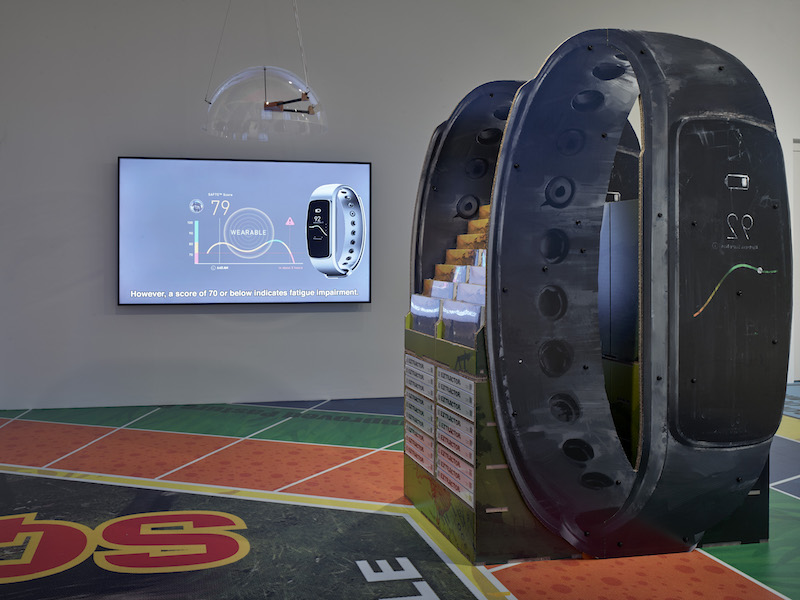 LL: Today we are protagonists of a contradictory relationship between nature and machine. Like politics and economics, technology is also based, in many cases, on materials and actions organized in hierarchical and centralized structures. Which technologies and what use of them do you think can be a paradigm for building a symbiotic—and no longer exploitative—relationship with the resources of the planet and of the human beings?

SD: Because of the way power is distributed at the moment, it seems like one would need to make changes using the technologies of economics in order to make a difference in the way some powerful humans design and use systems, to tilt things more towards the “symbiotic.” I was listening to a conversation with Sir Pankraj Dasgupta about a report he was commissioned to produce for the British Government about the climate, and his emphasis was on insisting that everything is priced wrong. There are many things that should be more expensive to more accurately model value. Care work should be more expensive, and so should the use of the “natural world.” When one translates those ideas into the language that is used to justify power, one can very easily point out what the problems with the current system are, and show how the wrong things are valued.

I’m not such a believer in silver bullet technical solutions for problems. I do think that some ideas in Blockchain hold some promise for similar reasons, because you can change the way price works. But there’s also a lot of noise and nonsense in Blockchain and crypto, so I’m unsure of whether that can be something that should be foregrounded as a solve-all, or even a space to address economics most effectively. Reinventing money and price is very disruptive, so you’d better hope that those doing it have a really broad idea of culture and history and the mechanisms they’re designing, and that’s unfortunately usually not the case. 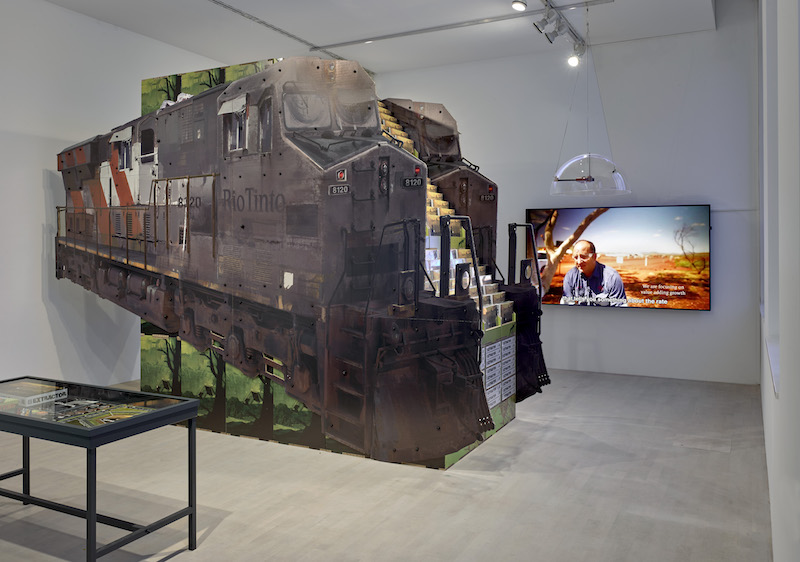 LL: On a general level, the show ‘Mine’ is about how systems organize people. I see a connection between this concept and your practice, which often deploys a “multiple authorship.” For this show you involved other professionals, like a courtroom illustrator and an artist who digitally created the exhibition in Minecraft. Do you see the collaborative approach as a mechanism to face individuality behind the digital society?

SD: Yes, I think it’s important to emphasize the collective nature of meaning-making in art practices. It’s a richer experience when more efforts and more people’s contributions are thought of as part of the creation process. However, we live in a world where individual experience is very much foregrounded, so it can be hard to fit these notions of collective production into those systems and still navigate the world as it exists and functions. The single position is just so structurally embedded in the way we talk about and think about artwork; I can never remember the name of the audio engineer that works on Billie Eilish’s songs, and I don’t want to when I’m processing her work for myself as an experience. Her singular name stands in as a bookmark for the experience I have with her music in my mind, and that’s just how it is. I don’t have the bandwidth for more. 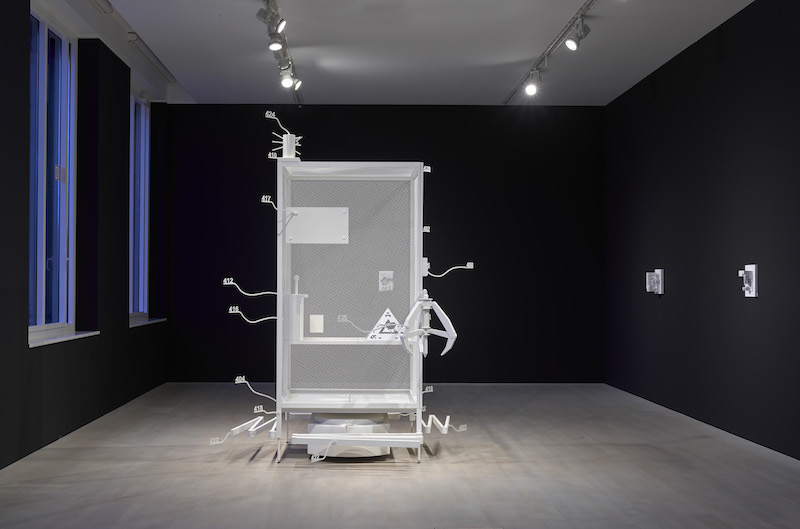 LL: Can you expand on the Amazon “worker cage” piece you mentioned? I think it summarizes quite well the essence of the ‘Mine’ exhibition, and maybe also your research and position towards the above-mentioned topics.

SD: It’s a very economic work, perhaps due to the results of some highly effective collective labour. I came across the form of the cage patent drawing through Kate Crawford and Vladen Joler’s research—they identified and foregrounded that patent design in a text and diagram called ‘Anatomy of an AI System.’ Making a “life-sized” model of the cage, including remnants of its patent-drawing origins (scale errors, reference numbers, etc.), made this function and structure imagined by this very powerful corporation much more tangible.

Being in the same haptic space as that object is truly confronting. It feels very heavy and awkward but also menacing and material. And then seeing this very convincing animation of this poor little Thornbill bird—a very modest-looking, small, plain, sub-species, of which there might be less than 30 flying around in the world—really contrasts the overbearing and theoretical design of a massive human cage. It’s also a work that does something when you view others interacting with it. A visitor uses their phone to view the augmented-reality bird. So, as you approach the sculpture, you see other viewers surrounding the cage and looking into it, empty, through their phones. And you hear the sound of the Thornbill, originally captured by researchers at the Australian National University, coming out of their phones. If there are a bunch of people interacting with the piece, then there’s likely more bird sounds coming out of those phones than in the Thornbill’s natural habitat, which is devastating.

The use of the phones—with the manufacturing and running, with all the energy and minerals and extractive processes that go into making these objects—is now the tool to experience and remind us of the way these animals are de-prioritised by our lifestyles and values. It’s just like all the other undervalued things, including the life of the person who was supposed to go into that cage at an Amazon Fulfillment Center, and so many others forced into service and maintenance for the systems of some person that looks like me. 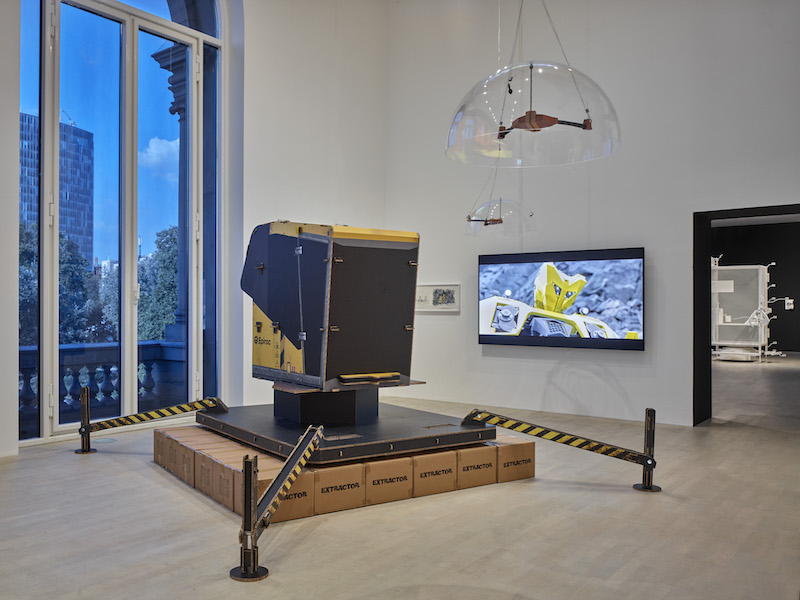