The theme of transmediale’s 2021 festival, “for refusal,” set out to examine the possibilities engendered by refusal, as deviation from the prescribed, and a proposal for a new way of thinking. In the exhibition space at Kunstraum Kreuzberg (the exhibition also takes place in the Betonhalle at Silent Green), ‘Rendering Refusal’ takes on the topic with an examination of habit and ritual, offering glimpses into the potential that can arise from a refusal of existing conditions. Each exhibited work challenges the emotional, structural, and spiritual rituals enacted everyday, to consider the ways in which deviations, or outright noncompliance, can constitute revolutionary actions.

A room with a pink hue and a reflective floor greets our socked feet at the entrance to the exhibition at Kunstraum Kreuzberg. A series of pipes connecting to the walls, floor and ceiling prop up screens, on which familiar scenes appear; a statuesque woman lounging on a chaise-longue, the arches of a Roman ruin. Upon closer inspection, each scene has been playfully altered by the inclusion of out-of-place objects. The woman lounging is being fed water from a plastic elephant, and she sits surrounded by fruit, still covered in its plastic wrap. ‘Ruses and Refusals’ by Madison Bycroft emphasises the uncanny nature of staging and invites the audience to examine the strangeness of each of her works, as each image, video and sound attempts to subvert the expected. Bycroft’s recreation of, albeit altered, classical poses and scenes asks usto keep our intuition to hand as we appraise common classical images in a new light. This appeal to intuition sets the tone for the rest of the exhibition.

Madison Bycroft: ‘Ruses and Refusals,’ 2019, exhibition view // Courtesy of the artist and transmediale

In the room just off of Bycroft’s uncanny work, Danielle Brathwaite-Shirley’s identity-driven computer game, ‘I Can’t Remember a Time I Didn’t Need You’ presents a tentative invitation to visitors, not without caveats. A point-and-click game set in a city overtaken by fog, the work is accessed through old, boxy desktop computers and explores the imbalance of power and opportunity in society, particularly through the lens of the Black Trans experience. Brathwaite-Shirley’s work attempts to dismantle the assumed rituals associated with gender and race in society. It asks the viewer to recognise their own privileges, which in turn govern the ways in which they will experience the game. The viewer is offered a series of locations and opportunities whose outcome is based on their stated race and gender identity. A series of questions highlights the barriers experienced by Black Trans people everyday, by imposing similar restrictions on viewers who do not share that identity. The work encourages the viewer to sincerely acknowledge the ways in which they can, and must, create space in their lives for marginalised voices. By tying the identity of the viewer to the protagonist’s agency within the work, Brathwaite-Shirley reminds audiences of the accountability that each individual has as they participate in societal rituals that reinforce modes of oppression. 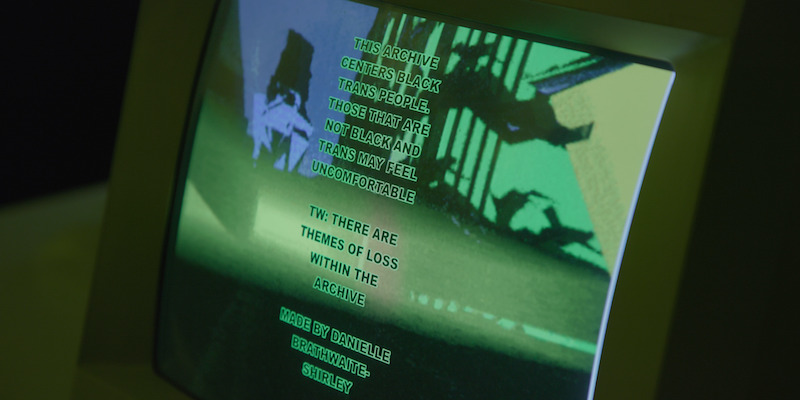 Danielle Brathwaite-Shirley: ‘I Cant Remember a Time I Didn’t Need You,’ 2020 // Courtesy of the artist and transmediale

‘Workation’ by Sofia Caesar can be found in a room with yellow walls and a semi-rolled yellow carpet. This four-piece video installation appears on a laptop, two monitors and a smartphone. It shows the artist attempting to work from positions that are usually reserved for relaxation, like in a hammock, or on the beach. The yellow carpet solidifies the synthetic beach-cum-office environment. Caesar’s work examines the reality of the “flexible” work week, and the ways in which people’s bodies meet the demands of capitalism. The mediums chosen to exhibit on—a laptop, monitor and smartphone—are mundane reminders of productivity and exhaustion. The rituals society previously practiced for relaxation have been co-opted by commercial enterprises to ensure that people are always reachable. Caesar’s dedication to working while on holiday leads her to fall out of the hammock, drag her computer and notebooks from her bed, and slip out of her chair onto the sandy beach. The physicality of the work captures the burnout society is experiencing from the demands of working from home. Caesar’s laptop and monitor act as the objects in a ritual of work, her relaxing surroundings provide the meditative backdrop, but her body refuses to perform the set sequence.

Moving away from human-centric refusal, Patricia Domínguez’s interpretation stresses the bond between human and animal ritual. The artist’s multifaceted installation ‘Madre Drone’ is inspired by devastating wildfires in Bolivia, as well as the 2019 civil protests in Chile. Domínguez parallels the cruelty experienced by animals as a result of the wildfires with the violence experienced by the inhabitants of Chile. Her work challenges the rituals that both human and non-human entities use to resist, like protest, altars, technology, habitation, and perseverance. Her sculptural works combine hair, crystals, body parts and clothing to create altar-like structures. Green lasers play a central role in her video work, symbolising the lasers used to blind government-funded drones during the Chilean protests. This image is paralleled with a toucan who has been blinded by the wildfires. Domínguez explores the interspecies pain experienced in the act of resisting violence. Madre Drone’ dismantles ritualistic practices into individual fragments and rebuilds a reality focused on the growth and perseverance of life.

Similarly, Anne Duk Hee Jordan’s immersive installation ‘Atmospheres of Breathing’ engages with ideas of non-human identity and ritual. Motion detectors fuel the mechanical breathing of various sculptural elements, which follow a 4-7-8 breathing pattern. This meditative breathing technique generates a calm energy in the carpeted space, allowing for the delicate sounds of inflation and deflation to guide the viewer’s own breathing. Jordan uses the rituals associated with this yogic pranayama breathing technique to emphasise the relationship between environment and living entities. A reclined chair offers a moment to rest. Not unlike a blow-up bed, the chair inflates and deflates according to the movements of other machines in the room. The sensation is almost imperceptible, as it inflates and contracts against one’s skin. Only when the visitor is in the centre of the room do they realise that their physical entrance into the space is what has caused all of this motion in the first place, with each motion detector being pointed toward the door. The viewer becomes the unwitting instigator of their own relaxation. Human and non-human entities work in tandem to create a codependent space. The ritual of relaxation is reimagined and executed by non-human entities.

Anne Duk Hee Jordan: ‘Atmospheres of Breathing,’ 2020 // Courtesy of the artist and transmediale

Transmediale’s exhibition at Kunstraum Kreuzberg/Bethanien explores possibilities and realities beyond the status-quo, and how our impulsive daily rituals might be subject to different forms of refusal, whether physically-, emotionally- or politically-motivated. The exhibition is a reminder that to refuse is to suggest that there is a better way, and that the collective unconscious, or societal rituals, are malleable. By examining the refusal of ritual, ‘Rendering Refusal’ imagines an alternative future for human, animal, and non-human resistance.