Berlin-based artist Lerato Shadi challenges societal assumptions about reality in relation to politics, race, power and labour. Shadi’s work highlights the essential need to amplify a diverse range of voices in order to secure a more complete and profound understanding of lived experience. Her durational pieces examine the histories of marginalised bodies and the effects of unacknowledged labour, oftentimes with her own body at the center of these works. Shadi’s work questions Western interpretations of history, using powerful examinations of political rhetoric by appealing directly to the importance of interpretation. In this way, she engages with the idea that narratives rely on an assumed understanding that must be interrogated. Beginning later this month, Shadi’s work will appear in a group exhibition alongside Lili Dujourie and Everlyn Nicodemus, as part of the exhibition series ‘On Hannah Arendt’ at Richard Saltoun Gallery in London under the title ‘What is Authority?’, inspired by Arendt’s essay of the same name. 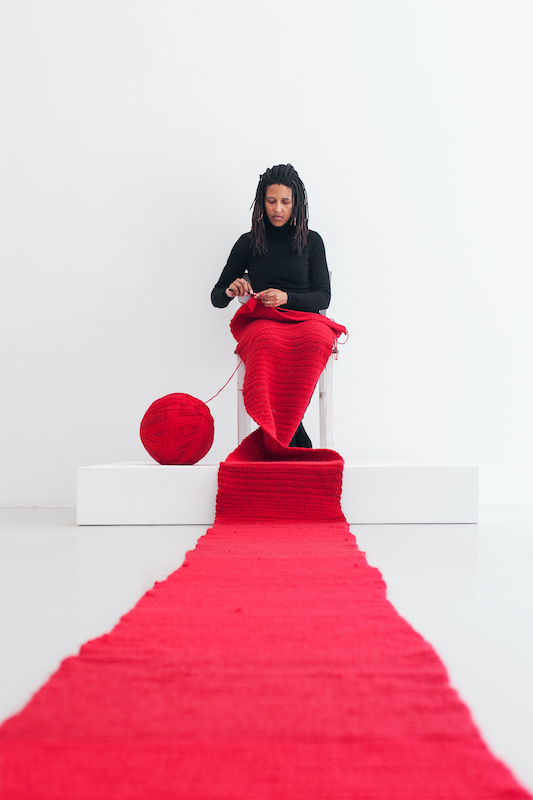 Aoife Donnellan: Your practice aims to establish an inclusive and accurate historical narrative, one which has marginalised bodies at its centre. This resistance to assumed reality is present in a number of your works. In what way does questioning assumptions interact with your practice?

Lerato Shadi: There are different layers and strategies of resistance. You’re taking it to the very first one, which is questioning. For me, questioning is very important but it’s also somehow inherent. We watch a lot of movies that are made by men, and those movies sexualise women. So what starts to happen is that we as women pursue women through the male gaze, and we are forced to sexualise and objectify ourselves, through the way that we are forced to view movies. Part of me thinks that there is a part where we just consume movies without questioning, but if you’re a woman you know something is wrong. It doesn’t become a space where you are easily comfortable, you understand that you might not have the tools or the language to deconstruct what is wrong with it. You think “that was funny” or “that was well made” but after seeing three of them you know something is wrong.

Questioning then becomes a new layer, where you think “what is it that I’m looking at. Why am I seeing the same thing? Who is making it? I don’t think like that.” The most famous one is when men make superhero films, you have women running high heels. No woman is going to make a movie where a woman is running in high heels. It’s impractical.

A lot of the time, we live in a world where there is one very narrow dominant voice. Which is a hetrosexual, white, male, middle-class, able-bodied voice. So that is very specific. The world is a lot more nuanced than that. For me, I really think that when all the nuances and all the different voices are given space and made available then our world is richer. 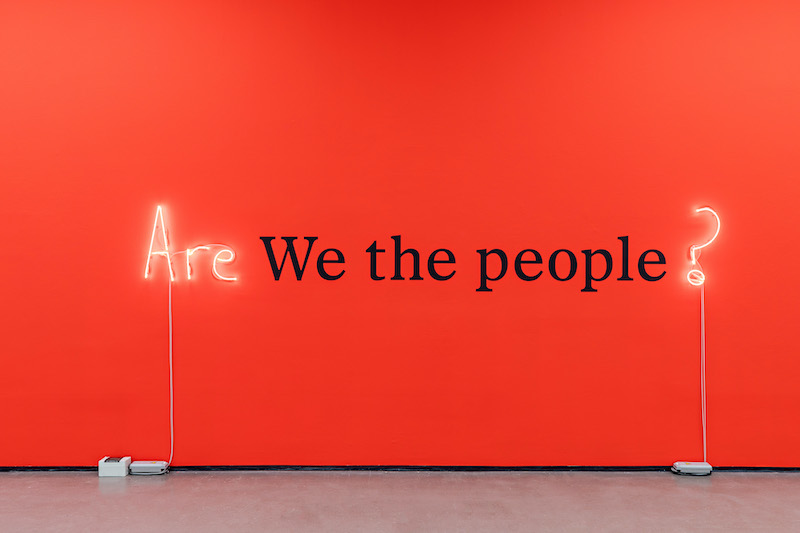 AD: ‘Batho ba me’, your work in the ongoing ‘On Hannah Arendt’ exhibition series examines how the term “we” can highlight an imbalance of power in political discourses. What was the inspiration behind this work? How does the theme of the exhibition ‘What is Authority?’ cohere with the work?

LS: In ‘What is Authority?,’ Hannah Arendt asks the question “what was authority?” She is looking at how we can get back to a space of authority. She defines authority as people obeying and complying without enforcement. In terms of ‘Batho ba me’ it takes the preamble from a couple of constitutions—especially the most famous one, the American one—which say “We The People.” The South African one also starts with “We the people of South Africa… believe that South Africa belongs to all who live in it.” It looks at who we classify as people and who we classify as not people.

When we talk about “we the people” in legal terms, then it excludes some people. If we say “we the people have rights” it excludes people without papers; if we say “we the people” within different party systems, or within institutions that have power to enforce those systems of segregation. When people with political and systematic power make those separations then we the people buy into, support, and are complicit in those structures. ‘Batho ba me’ translates to “my people”, and it references how politicians talk and make speeches, and ask for loyalties from my people. 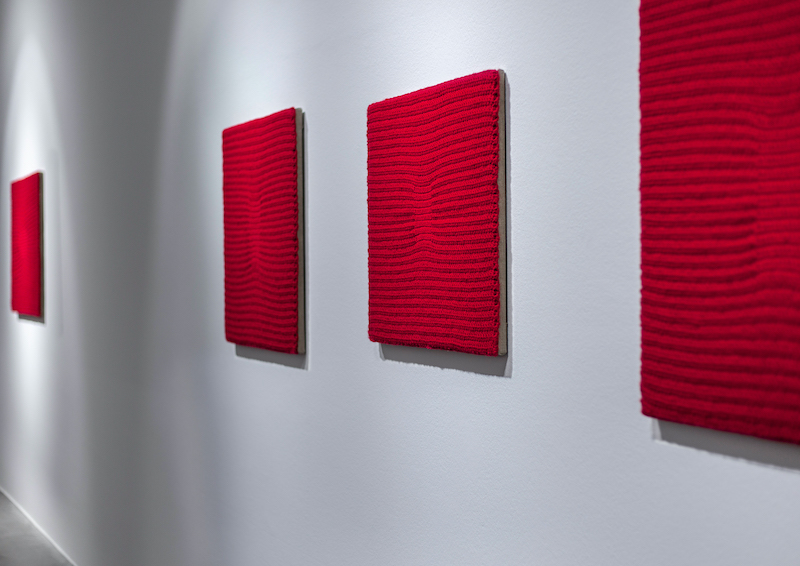 LS: At the moment, I have only used the same textile, which is wool; a red string. I remember one of the reasons I started using wool in my very first performance was that it was cheaper. I also liked that I could almost track time or count time, it allowed me to work with durational performances. I was also interested in breath, meditation, and in the seemingly mundane nuances that make life what it is.

For example, I have a video where I knit for seven hours straight with no breaks. It is a video, not a live performance, because I also wanted that string to act as an hourglass. To be comparable to an hourglass. Knitting allowed me to make this seven-hour video for camera, which was another way to think about performances and recordings and whether they have to be live: what would it look like if I made a performance for camera and not a live audience?

The seven-hour one becomes an hourglass, which gets watched over and over again but not by the same audience. I always say that the people who enjoy it the most are the people who are sitting with the exhibition, they’re sitting every single day, and after an hour you don’t have to look at your watch, you can look at the video and you can say “oh, it’s been an hour.” It’s interesting how, when you view video, you always wait for the moment you last saw, and you go “okay, the circle is complete, I can go.” But with this, you can’t. You are not required to sit for seven hours, you know that you can’t wait for the moment you last saw. It allows you to realise that nothing is going to change. That figure will still be there knitting. 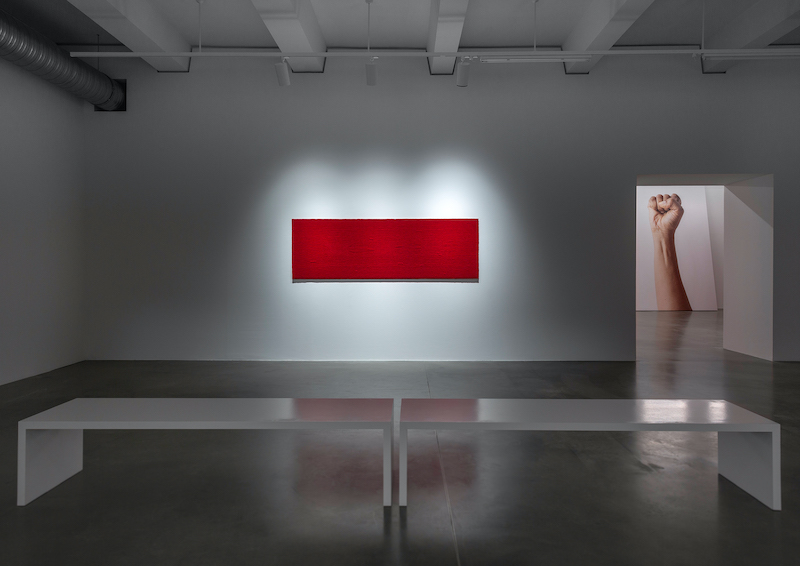 AD: While the themes behind your work are complex, the manifestations are often powerfully simple. For example, single large images of closed fists, or large red textile squares with changes in stitching. What prompts the aesthetics in your practice?

LS: I think a lot of the aesthetics are about my gut intellect. This is part of my character within the way I make work. A lot of my work requires the viewer to bring themselves in, and to look at it from where they stand. I don’t make work from the space of assuming a universal voice. I don’t claim a universal voice. I also don’t work with an assumption of a human experience being common. The work must be open enough for people to be able to enter it, but it’s important that they enter the work from the space that they’re at. It asks a lot of questions, which are also the kind of questions that I’m asking of myself. But I think I do it with the understanding that the audience and I might be in different spaces, or different levels of learning or unlearning, or relearning.