On display at the Schinkel Pavillon until the end of July is the cross-generational group exhibition ‘Sun Rise | Sun Set.’ The exhibition apposes contemporary artists alongside those of the 19th and 20th centuries, whose works create a multi-layered response to the unfolding eco-catastrophe of our time and address one of its most pressing issues: climate change. By presenting the ever-changing relationship between humans, animals, plants and inanimate objects, the exhibition attempts to portray the indivisible connection between the Earth and its dwellers, and it invites the viewer to define and understand this relationship in a new light. 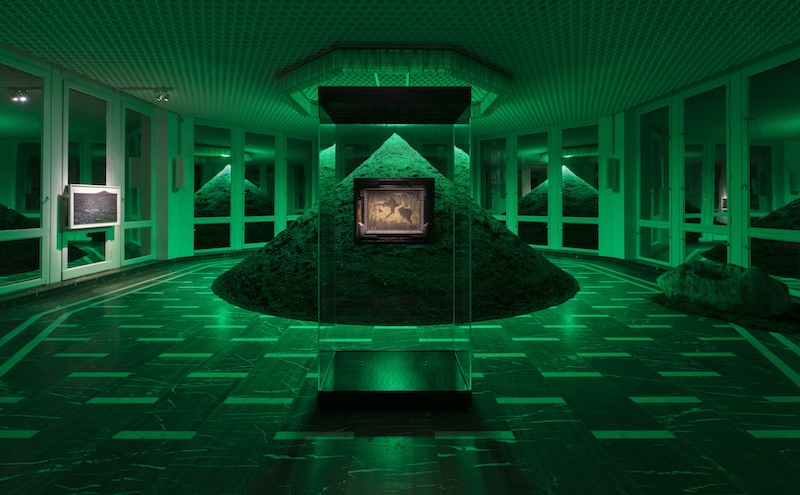 Walking the rooms of the pavilion, which are arrayed with surreal landscapes, biotechnical hybrids and futuristic scenarios, the visitor is faced with a multi-sensory experience that offers an alternative reality, a reality which is in contrast with the current status quo of uncertainties, losses and restrictions. On the first floor of the exhibition, visitors are likely to be overwhelmed by a strong smell that dominates the whole room. An impressive green-lit mountain of sand is formed inside the pavilion’s tall room, inviting the viewer to ponder how physical and biological processes affect art. The colossal installation, entitled ‘Infection (Calvin Klein Obsession for Men),’ by the Swiss artist Pamela Rosenkranz, is based on a research into an infectious disease called toxoplasmosis, which is mainly transmitted by cats and affects up to half of the world’s population. For this installation, Rosenkranz has used sand soaked with the fragrance ‘Obsession for Men’ by Calvin Klein, made from synthetic feline pheromones. The perfume has been used to attract wild cats in order to entice them into so-called photo traps, with the help of artificial pheromones. Camera trapping is a method for capturing wild animals on film, with as little human interference as possible.

The bright green light illuminating the peak of the sand pyramid not only plays interesting visual games, but also evaporates the scent of the stained sand. With ‘Infection (Calvin Klein Obsession for Men),’ Rosenkranz creates an interface between man and nature, civilization and wilderness. The affect of this symbiotic and, at the same time, destructive relationship depicted in Rosenkranz’s piece is intensified by the painting ‘La Belle et la Bête’ (1908) by Henri Rousseau, which is on display directly in front of the huge pile of sand. In the painting, which is based on the French folk tale ‘Beauty and the Beast,’ a woman is depicted having intercourse with a wolf, while holding a mirror in one hand. The eerie and surreal painting is a reminder of the ways in which humans’ relationships to nature have always been accompanied by both longing and fear. Adding another layer to the experience of these works is the sound of the music piece ‘ZURE’ by Ryuichi Sakamoto, one of the most prominent composers of our time, which plays in the background. Composed after having survived throat cancer and influenced by the many earthquakes and tsunamis that occurred in Japan in 2011, ‘ZURE’ evokes a strong emotional reaction; a feeling oscillating between resignation, melancholy and hope.

The interconnectivity between humans, animals, plants, inanimate objects, technologies and non-beings takes another form and, in a way, a life of its own, on the ground floor. Here, on display, is ‘Circadian Dilemma (Dia del Ojo)’ from a series of aquarium works by the French contemporary artist Pierre Huyghe. The piece houses a specially conceived aquatic landscape that recalls a Mexican water cave. Six blind cave fish populate the aquarium. As an adaptation to their habitat in underwater caves without any light, “blind cave” fish are generally non-seeing. However, some fish of the species retain the potential for vision and can see. Among the six fish in the aquarium, only one can see. This difference among the fish creates the title of the work, ‘Circadian Dilemma’: the fish are subject to alternate circadian rhythms, as the blind fish no longer follow one determined by light that depends on the 24-hour rotation of the Earth.

By making tangible the indissoluble interpenetration and interdependence of the human and non-human environment, ‘Sun Rise | Sun Set’ calls for a reconfiguration of the role of humans as a whole and an acknowledgment of hybridity in all its forms. This hybridity also manifests itself in the exhibition’s choice of selecting artists from a variety of different time periods, backgrounds and mediums. ‘Sun Rise | Sun Set’ is an invitation for welcoming hybridity, especially at a time when the planet’s habitability is becoming increasingly compromised as a result of human activities. Pierre Huyghe’s ‘Cerro Indio Muerto,’ a photograph taken in the Atacama Desert in Chile, one of the driest areas on earth, which shows a human skeleton found by the artist there, has perhaps the most striking final word on how the exhibition views our impending future, if we don’t learn to embrace a more holistic view of the Earth’s ecosystems.