‘The Last Museum’—currently presented online by KW Digital and curated by Nadim Samman—features all-new commissions that blur the line between cinema and sculpture, while exploring the potential of so-called “web-site-specificity.” This unusual—and unusually seamless—digital exhibition draws from clickable video game aesthetics, addressing the complex layering of physical space and sculptural objects, in relation to the digital realm.

Online on the KW website until June 6th, ‘The Last Museum’ features works by Nora Al-Badri, Nicole Foreshew, Juliana Cerqueira Leite, Jakrawal Nilthamrong, Zohra Opoku, and Charles Stankievech. After its run with KW, ‘The Last Museum’ will tour as a ‘pop-up exhibition’ on the sites of international partner institutions, adding a new chapter—with an additional artist/site from the host institution’s country—each time. From September 14th to October 16th, 2021, the exhibition will be hosted on the Polyeco Contemporary Art Initiative (PCAI) website. We spoke to curator Nadim Samman about the design for the exhibition and what it proposes for the future of digital and non-digital artworks. 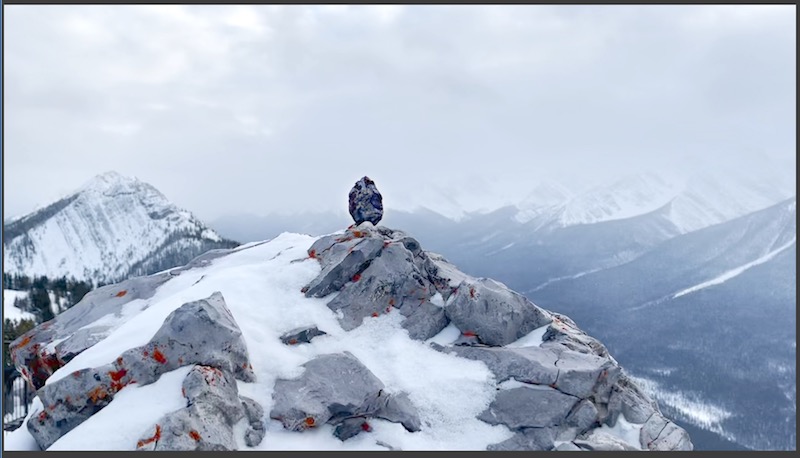 Alison Hugill: The premise underlying the new KW Digital exhibition ‘The Last Museum’ involved a request of the artists that they author a “sculptural group” exploring the boundaries of (web-)site-specificity. Can you tell us what you had in mind for the commissions and how they panned out in the final exhibition? What degree of conversation between works was initiated before the final presentation mode, or to what extent was it left up to chance?

Nadim Samman: Although the exhibition experience was supposed to be primarily accessible online, I really wanted to root it in a physical place and concrete objects. The ambition was to dramatize a continuum between a hole in the ground (for example), or a piece of stone, and the weightless digital artifacts that you might encounter on a screen. I wanted to give them all equal billing, in terms of their tangibility and their importance within the exhibition. The idea was to set things up so that an artistic moment occurs at every layer of the project/infrastructure. For example, a physical intervention in real space is followed by an artistic intervention that is specific to the user interface. So, the aim was not to subordinate one part of the project’s reality to another, but to distribute interest across the continuum. In terms of dramatic thrust, I wanted to emphasize that just as the digital is not merely ethereal but firmly rooted in material conditions (servers, wires, devices) it is also the case that no physical object of interest escapes digitization today. Every artwork in a physical exhibition ends up on instagram or such—and The Last Museum take on the whole landscape. It accepts all the moments and modes of art under this condition and is ecumenical in allowing them to be revalued through the act of exhibition. This is part of what I mean when I talk about web-site-specificity, which is not just a URL. 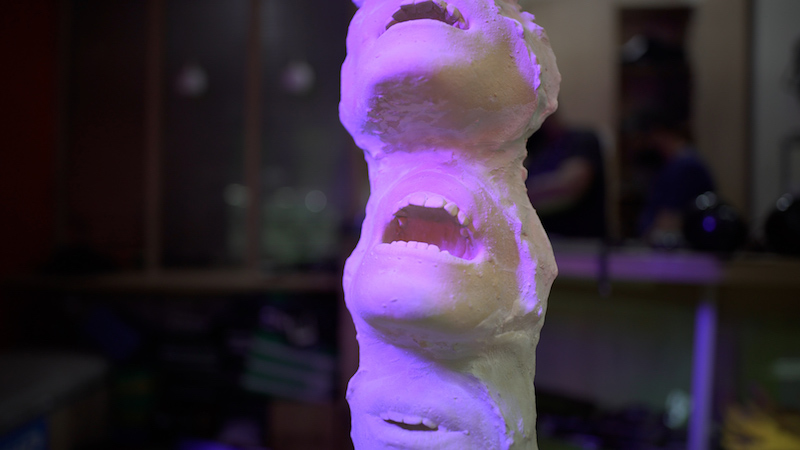 AH: As far as digital exhibitions go—and we’ve seen a lot in the last year—I was struck by how seamless and easily navigable ‘The Last Museum’ was. Can you tell us a bit about the design and how the choice of works factored into the decisions surrounding how they would be shown, specifically with regard to the way-finding protocol put in place with the web designer Jules LaPlace?

NS: To some degree the user experience of ‘The Last Museum’ is a kind of interactive cinema. The method of navigation was central to the brief that I gave the artists and the web developer. In some respects it is quite simple: moving image with clickable regions. Those clickable regions are associated with sculptures that have been captured on video, or other objects. In some cases, the clickable region pushes you on to the next scene, to other objects. In other cases, it loads another layer of content onto the screen, another layer of text or a popup, for example. The functional example for this is Google streetview or a rudimentary video game. The trick, and this is where the developer’s skill comes in, is to have all the videos load immediately, without external hosting, to have soundtracks and such play automatically. Seamlessness and usability was a technical priority. It was also important that every digital object was bespoke. So, the cursor changes throughout the project. Often with every clickable region it is a different shape or icon designed by the artist. However, their designs were often reworked so that they were part of a strong graphic identity. This graphic identity is proposing a continuity between the various artists’ contributions. Despite the fact that the scenery changes, I wanted users to feel like they are on a path.

Going back to cinema, I found it important that there would be attention to soundtrack. The feeling of immersion in a pictorial space is enhanced by a compelling soundscape. While this exhibition appears on your laptop, it was also my ambition that it could be projected at cinema scale; that it could be experienced as a concert/performance, and hold a room. ‘The Last Museum’ can take place on a screen of any size. 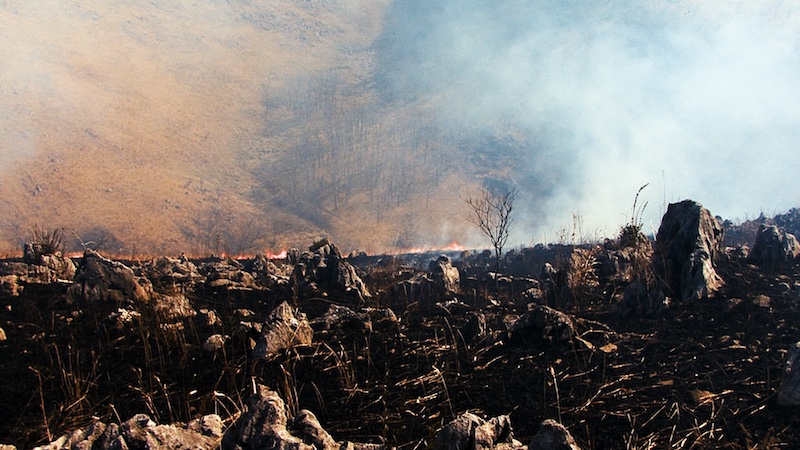 AH: What significance does the title ‘The Last Museum’ have for you and for the presentation of this particular group of artists?

NS: ‘The Last Museum’ shares its title with a semi-fictional memoir written by the cult author and artist Brion Gysin. His late text ‘The Last Museum’ (1985) paid tribute to the famous Beat Hotel in Paris. It was a place he knew well. Gysin’s literary experiment was a leap into the grey area between documentation and poetic license, before reality TV and fake news. Perhaps indicating the significance of this in-between status, the story was metaphysically set in the bardo—the Tibetan Buddhist state of intermediate existence between two lives (death and rebirth). The book’s plot also circled around the theme of displacement. In it, an American investor plans to buy the hotel and transport it across the Atlantic to be re-built in the vicinity of the San Andreas fault. A suggestive allegory for how personal memories, past lives, and documentation intersect on the plane of individual psychology, Gysin’s ‘Last Museum’ could not have anticipated the spatial and temporal bardo that is the World Wide Web. It is this planetary infrastructure that constitutes, perhaps, the final break with a spatial imaginary first shaken by the telegraph. Throughout ‘The Last Museum,’ states of being between life and non-life (first broached in ancient religious texts) are staged as live issues in the digital era. Indeed, the works in this exhibition talk about the space between a life recorded by digital technology and the digital afterlife or archive. But can one die in the digital realm? Does the digital museum not encompass everything? Beyond a museum without walls, is it not a museum of every possible wall? 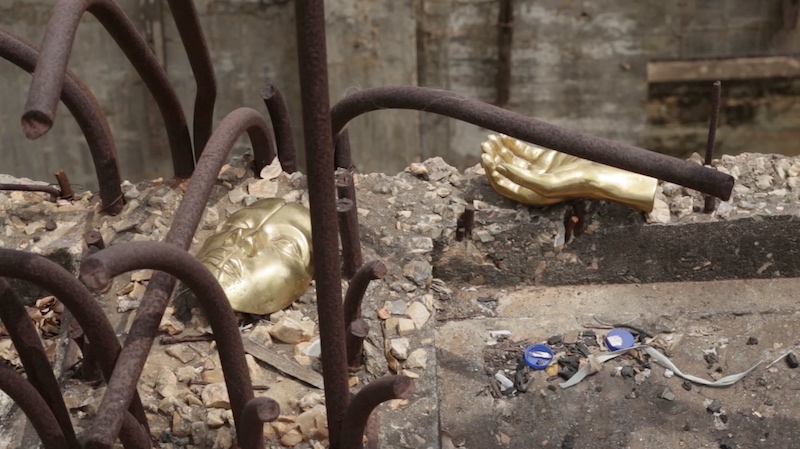 Zohra Opoku: ‘The Myths of Eternal Life,’ film still from The Last Museum, 2021 // Courtesy the artist

AH: How does the exhibition serve as an antidote or future-oriented proposition with regards to the current state of affairs (intermittent museum closures, social restrictions, etc.)?

NS: This project was conceived during the first wave of COVID-19, while we were all locked down and logging on. Although international, its production required no travel for persons or artworks. It can be visited from your home (computer). Nevertheless, I don’t view the development of this format as any kind of replacement gallery experience. I think the more interesting contribution is to approach a growing question in the museum sector: namely, how can analog artworks and digital space come together in a meaningful way? We must also explore how digital artworks can relate to analog space. ‘The Last Museum’ attempts to work on both problems at the same time, creatively, playing with the issue of translation and re-representation in a bi-directional manner. Rejecting the realist ideology of Online Viewing Rooms (OVRs), ‘The Last Museum’ can only dream of answering this question, over and over again.