Berlin is a city wrenched from wetlands. Its erection at the junction of the Spree and Havel rivers meant taming the water to build a new world. No longer a settlement by the swamp, Berlin’s urban history as a marsh metropolis aligns it with other major cities in the world. “Think of London, New York, Paris, Chicago. Humans built their cities on or adjacent to tidal and freshwater wetlands,” explains Jakob Kudsk Steensen, who I met in his studio in Wedding to discuss ‘Berl-Berl,’ his upcoming solo exhibition at Halle am Berghain. He is quick with his answers; every word has its place. “The negative connotation of marshy landscapes as wastelands came with modernism, with the rationalised perspective on space in the 1800s. I’m interested in pre-modern signifiers. The wetland as a necessity of life,” he asserts. 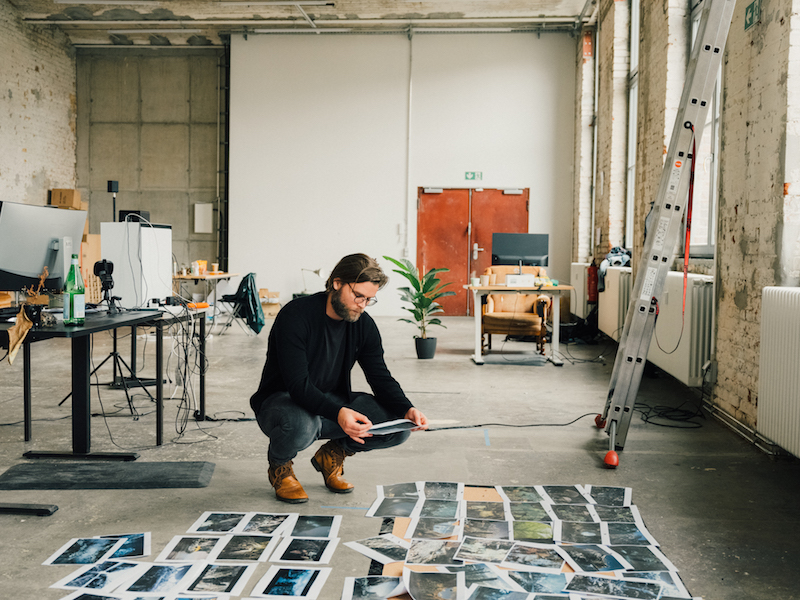 ‘Berl-Berl’—commissioned by Light Art Space (LAS) and guest–curated by Emma Enderby—will transform the infamous club’s dance floor into a world of ancient swamp mythologies, extinct species and local ecosystems flooded by water. Kudsk Steensen’s environmental storytelling moves beyond the story templates of tragedy and melancholia for a lost world. His vision and language are affirmative: “I find it important to channel something differed with technology, bring curiosity, bring wonderment.”

Working at the forefront of art, ecology and technology, Kudsk Steensen builds worlds for people to enter. His artworks comprise tools and generate platforms for different disciplines to develop new modes of communication and collaboration. His studio at Callie’s, where he is an artist–in–residence, is a testament to this. In the middle of the room, facing the windows onto the courtyard, three desks with computers and screens form a straight line. Soon, they are occupied by two of Jakob’s collaborators: Matt McCorkle and Lugh O’Neill, working on a spatial sound system. Straight away, Kudsk Steensen makes clear the dynamics in the studio: “Producing work for other people shaped my knowledge of the craft, yet showed me what I didn’t like: One director telling other people what to do. When I work with people, it is essential to me that they get to experience something else,” he maintains. 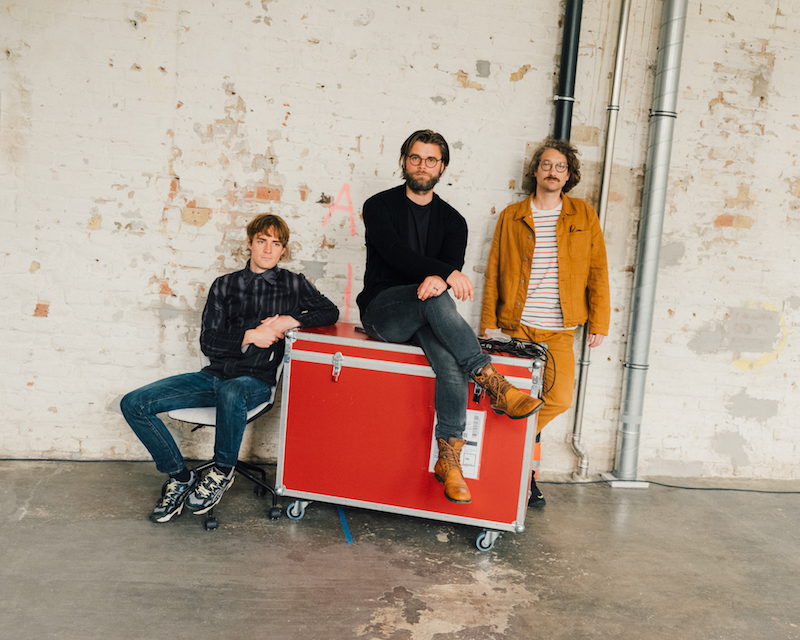 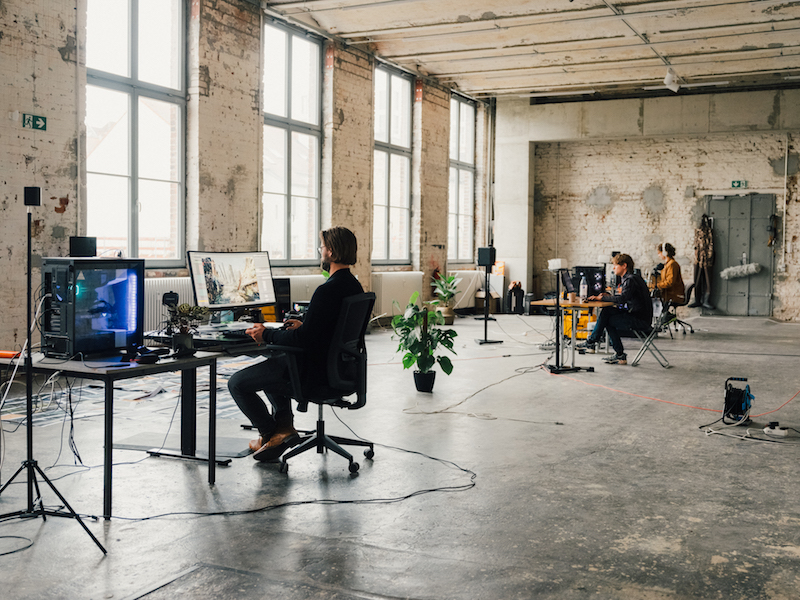 Before Kudsk Steensen turns on his computer to log into the virtual, we stop in front of a small table: A piece of bark, a dried fir branch, some dried specimens of leaves, all presented neatly on silver hi-shine floor samples. The small collection of curious shapes stem from the Spreewald, the extensive bog landscape and biosphere reserve about 100km southeast of Berlin. Usually, the only things he takes during his research trips are photographs and recordings. By all means, this exception perfectly accompanies the images printed out and pasted above: Close-ups of the outermost layers of stems, entangled roots reaching down into the soil in their search for moisture and minerals. The organic material insinuates the physical reality of the digitised landscape. Yet, curiously, both appear alien and somehow uncanny, from a place oblivious to us. 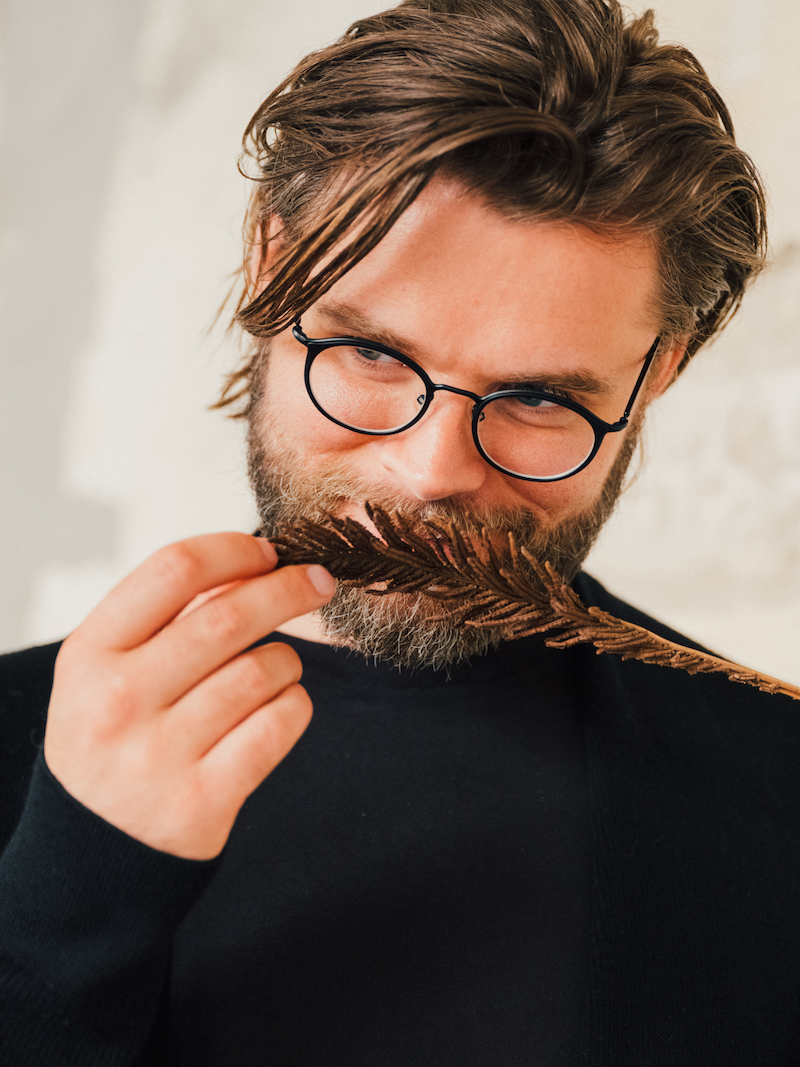 We move on, and my eyes wander to the back of the studio. A camouflage suit hangs from the door not far from a microphone with a windscreen. The garment for concealment and this slip-on fur cover visualise the artist’s practice outside of his studio in my head, him crawling through the mud. “There are cameras, humans, microphones moving through the environment that becomes like a channel to something else,” Kudsk Steensen explains. He describes the eye-opening effect of traversing a landscape with someone who has been passionately studying these kinds of ecosystems for years—observing things one otherwise would never have noticed. “You start appreciating the ground as something alive. If a leaf falls into a wetland, it might take thousands of years to decompose. Something can be dead but not vanished,” he reasons. 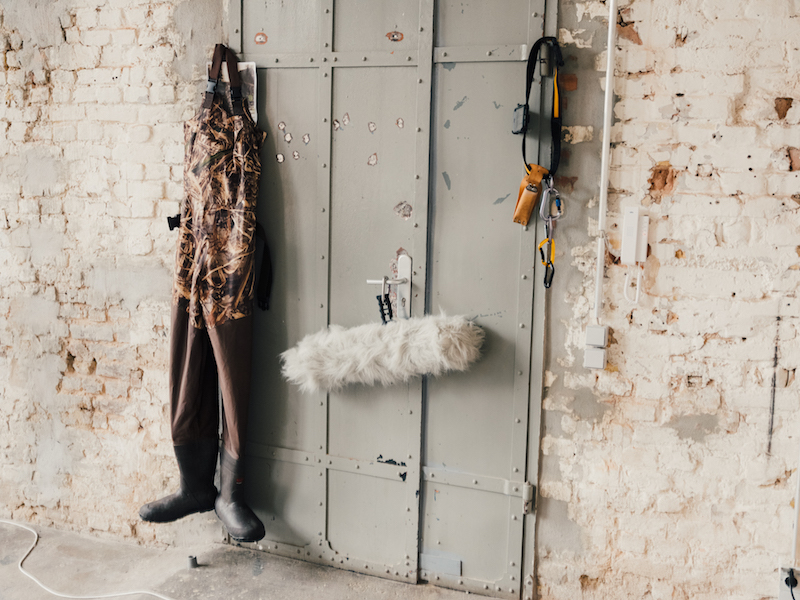 Swamps and wetlands, neither land nor sea, with their multiple cultural connotations, seem to build the perfect ground to extricate fabricated fictions and realities from different times. They are one of the most valuable ecosystems on our planet. One can imagine them as giant sponges filtering and purifying waters, being home to an extensive assortment of plant and animal life. Yet, wetlands are said to disappear three times faster than forests. “Extinction is not just the disappearance of species but also about the vanishing of perspectives and sensibilities,” he says. Instead of concentrating on one specific narrative, his current project relies on multiplicity and chaos. 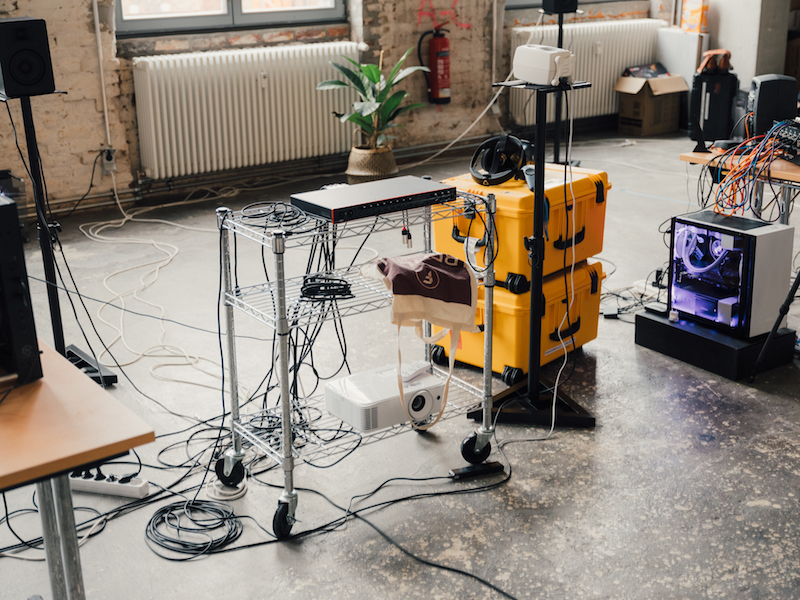 The voices he brings together are from different fields. The cultural and linguistic aspect is informed by the cultural history, songs, mythologies and languages from this specific area through time, by collaborating with poet and artist Precious Okoyomon; artist, writer and musician Johannes Heldén; and curator, artist and writer Dane Sutherland, aka Most Dismal Swamp. Together with field biologists from Naturkunde Museum Berlin, he takes recordings of the present landscape of the Spreewald. He explores the museum’s scientific collection of taxidermy and animal voices to combine these accounts with his photogrammetry from the wetlands and his research on extinct and extant animal species. Thinking back on his ventures into the archive, Kudsk Steensen explains—wary of the archive’s assumed objectivity: “When I move through the archive, I see humans collecting things and colours, trying to compose stories.” He embraces the intuitive, emotional use of the material he gathers to focus on how we psychologically and emotionally relate to the climate. 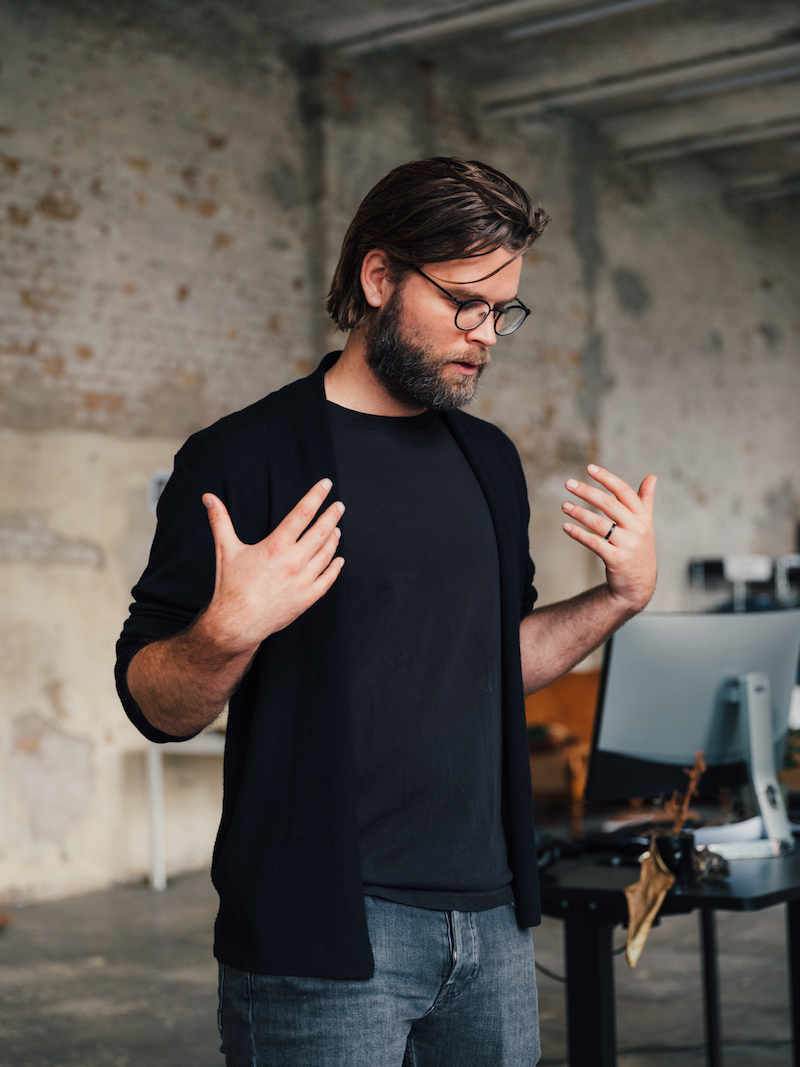 For the first time, Kudsk Steensen brings a human voice into his works. He sits down at his desks and plays me a short sound sample from his phone. He works together with musician Arca, who has collaborated with Kanye West, FKA Twigs and Björk, while developing her sounds—an eerie blend of ambient and glitch pop with strangely beautiful, disembodied vocals. “I send a raw recording for her to interpret,” he explains, “The vocals morph together with the environment, with archived animal voices or the sound of the wind, to build yet another perspective on the landscape.” He turns to his computer. With rapid clicks and key combinations, Kudsk Steensen moves through the programme, shifting between different display modes: An environment opens up, it turns from day to night; we zoom in and out, plunge into the water and look up at the sky. With seemingly endless possibilities of standpoints, we could go on forever. 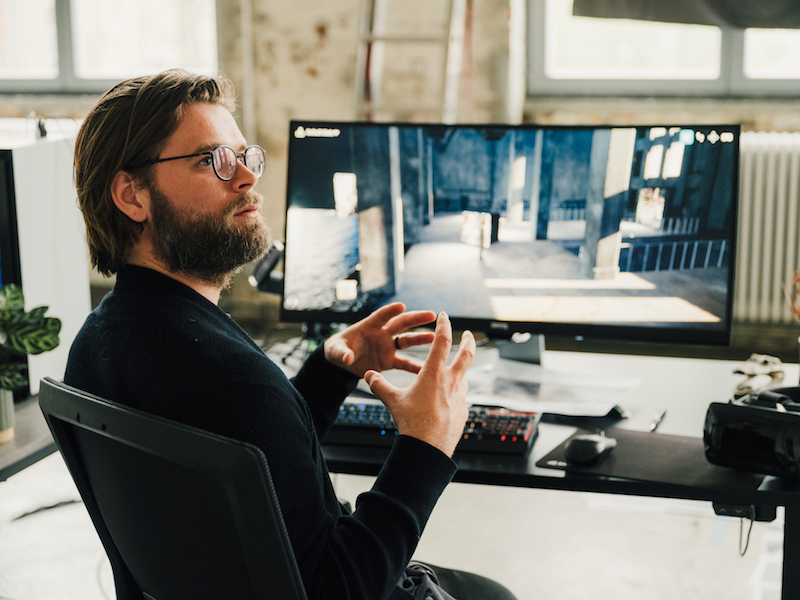 Just before I leave, he switches windows, and we are inside Halle am Berghain. The virtual model of the club was supposed to be shown online to accompany the exhibition. However, this being against Berghain’s policies, it now serves for online site visits between Jakob, the show’s curator, logging in from New York, and other collaborators. The ability to match any building to a virtual environment is not simply a practical tool during confinement. It opens up possibilities for live performances, operas or festivals in a virtual landscape. “Imagine a musical that doesn’t have an end,” he tells me. More than anything, it becomes evident how Kudsk Steensen’s artworks are alive. They are platforms for engagement where viewers and collaborators mature to users experiencing technology as a possible pathway to ecosystems that encourage deep physical engagement with the world around and beneath us.