Intergenerational continuities between artists in Berlin engaging with Leftist political practice are today only rarely thematised. Such legacies are pockmarked by stutters and silences caused by exile, displacement and murder, and further, by the remnants of intellectual property and archival systems left behind by parallel and successive political regimes. These systems often fall short of recognising process-based, collaborative authorship. Relevant material held in public, private and privatised archives is often difficult to access. Parsing such material, including its blind spots, can perhaps occur only through a precise understanding of one’s own relation to it, including the structure of the archive itself, the logics behind its regulated accessibility and one’s own reasons for claiming access at all. 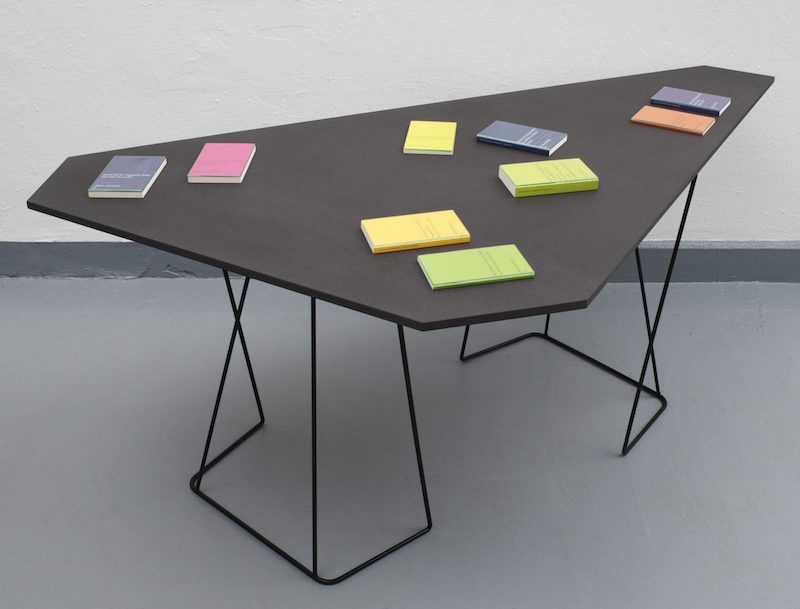 Ina Wudtke’s solo exhibition ‘Greif zur Feder’ reflects the artist’s precise engagement with materials both within and outside of formal archives, as she sounds out intimate conceptual and collaborative connections between writers who were active during the Weimar period and/or the nascent decades of the German Democratic Republic (GDR). Moving between these two eras, remaining attentive to continuities in conversations and approaches between generations, the exhibition questions the dominant tendency to invest in one (often male) author-figure, instead opening space to think through the political stakes of practices that are both process-based and collective.

‘Greif zur Feder’ is informed by Wudtke’s years-long research on those artists and writers whose practices were politicised by labour and rent struggles during the Weimar era and the early 1930s—a preoccupation that began, for Wudtke, in 2012, when she began researching historical rent movements while fighting eviction from her flat in East Berlin. Wudtke discovered that during the Weimar period, the German Communist Party (KPD) called for workers to document their living and working conditions in prose, publishing the results—including a rent strike in Berlin that otherwise went completely undocumented—in the magazine ‘Rote Fahne.’ However, the exhibition’s title stems from the GDR catchphrase “Greif zur Feder, Kumpel!” (“Grab a pen, mate!”), which anchored the Bitterfelder Weg (1959–1965), an early phase in GDR cultural policy encouraging worker milieus to engage with writers and vice-versa, and to create their own literature. This occurred whilst many older artists and writers who, under Nazi Germany, had survived exile or imprisonment, returned and—together with the younger generation—initially embraced the East German socialist state. Yet it was not only after the GDR’s dissolution that the work of such artists and writers went under-acknowledged or was misrepresented. 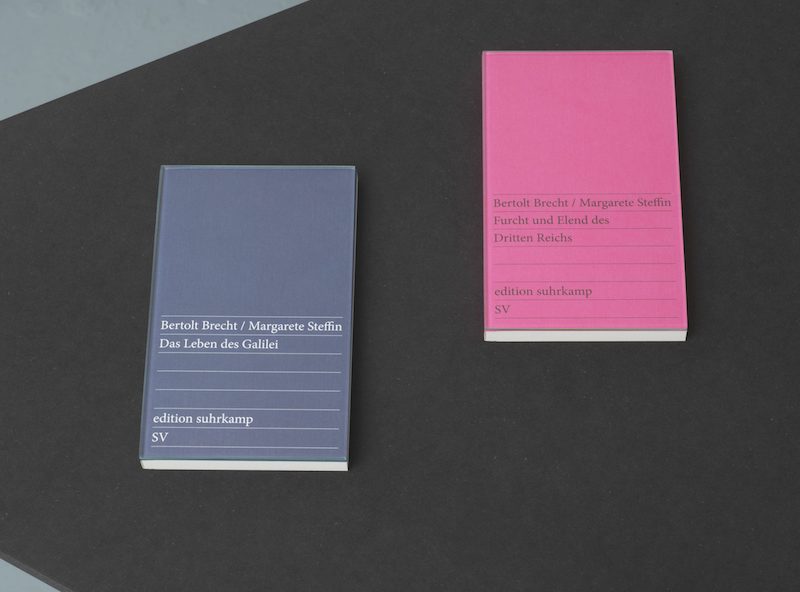 The three central works anchoring ‘Greif zur Feder’ tackle specific gaps that resultantly arose. Entering the exhibition space, the visitor encounters an angular, black table displaying Suhrkamp Verlag editions of plays that have, until now, been attributed to Bertolt Brecht alone. In this work, entitled ‘Vorschlag für eine zukünftige Ausgabe (Suggestion for a Future Edition)’ (2021), Ina Wudtke has hacked Willy Fleckhaus’s Suhrkamp cover design to acknowledge Brecht’s long-term collaborators, who include the writers Margarete Steffin, Elisabeth Hauptmann and Ruth Berlau. The exhibition space is divided by an elegant textile that includes sheer black tulle embellished with a stylised, silver line-drawing of Steffin’s profile and autograph, centering her as a performer and author in her own right for perhaps the first time. Behind the curtain, the only text by Steffin to be published under her name during her lifetime is reinterpreted in the video work ‘Lied des Schiffsjungen (Song of a Deck Boy)’ (2018) by duo David and Andrej Hermlin. The final work, a video installation that shares the exhibition’s title, consists of a display of books and a video interview with writer and publicist Gerhard Wolf, husband of renowned writer Christa Wolf, who died in 2011. Wolf animatedly recollects the Bitterfelder Weg’s beginnings, including the couple’s in situ engagement with a “writing workers’ circle” (“Zirkel Schreibender Arbeiter”) at Waggonbau Ammendorf in Halle between 1959 and 1962. As Wolf details cultural-political discussions between his seniors and contemporaries, from Willi Bredel and Louis Fürnberg to Brigitte Reimann and Maxie Wander, it becomes clear that the Bitterfelder Weg was soon to be prematurely abandoned because it led to—in Wolf’s words—“not socialist realism but realism”. Exhibition visitors are welcomed to take early editions of the above-mentioned writers’ work from the wall display and leaf through them.

A conversation with Ina Wudtke in the exhibition space reveals individual biographies and details crisscrossing and linking the three works. A red thread is to be found in the biography of the above-mentioned German writer and actor Margarete Steffin. Born in 1908 in Rummelsburg (today’s Berlin-Lichtenberg), her father (a factory worker) forbade her to get her high school diploma, despite her talent in school and the promise of a scholarship. Steffin instead studied at the MASCH (Marxist Workers School) with Helene Weigel and became a lead singer in the 300-strong Fichte Chor, one of three huge workers’ choirs in Berlin at the time. Weigel introduced Steffin to her husband, Brecht, who was to become Steffin’s lifelong collaborator, friend and lover. In parallel, Steffin became involved in a series of small, performative agitprop choir-interventions, during one of which she was arrested for interrupting a screening at the Lido Cinema in Kreuzberg. Although Brecht helped her to avoid a jail sentence, she was now known as a political dissident to the authorities, placing her in danger when the NSDAP came to power. She joined the circle around Brecht as it moved in exile from Denmark, to Sweden and Finland. 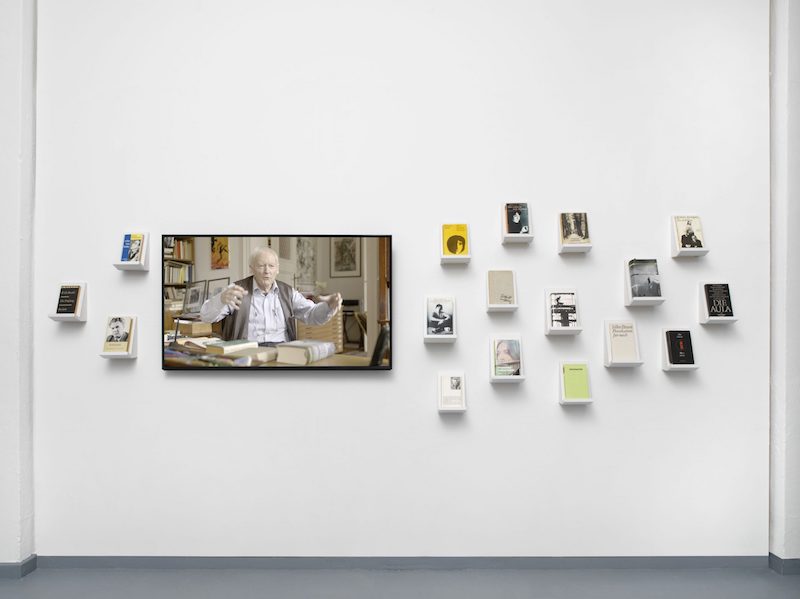 Works such as ‘Life of Galileo’ (1939), ‘Fear and Misery of the Third Reich’ (1935–43), and ‘The Resistible Rise of Arturo Ui’ (1941) stem from this exile period. Brecht, who came from a bourgeois family, relied on Steffin to write scenes in a style and language that matched reality lived in the workers’ milieu. It could be said that Steffin and Brecht’s writing relationship was characterised by a shared conviction to overcome class oppression, yet Steffin herself suffered from chronic tuberculosis—a disease not uncommon to those who grew up in degraded, industrial areas such as Rummelsburg. She died at just 33 in Moscow, in 1941. Only two decades later were her collaborations with Brecht to appear in print, albeit—both in the West by Suhrkamp and in the East by Aufbau Verlag—under Brecht’s name only.

And what of the single text published under Steffin’s name during her lifetime? ‘Song of a Deck Boy’ (1936) begins with the line “My mother used to tell us…,” telling the tale of a boy who leaves home at 13 to work at sea for a greedy cook. The boy observes the rich eating seven-course meals, while the cook jokes that his workers will have to eat soup made from wallpaper paste. Outraged, the boy and his comrades defeat the cook by attacking him with a ladle, make their own delicious soup, and share it between one another and the dog. The “fat become leaner,” and the “thin become fatter.” Re-performed with dramatic flair by the Hermlins in Wudtke’s video work, Steffin’s parable affirms the possibility of redistributing wealth through self-organisation and collective action. 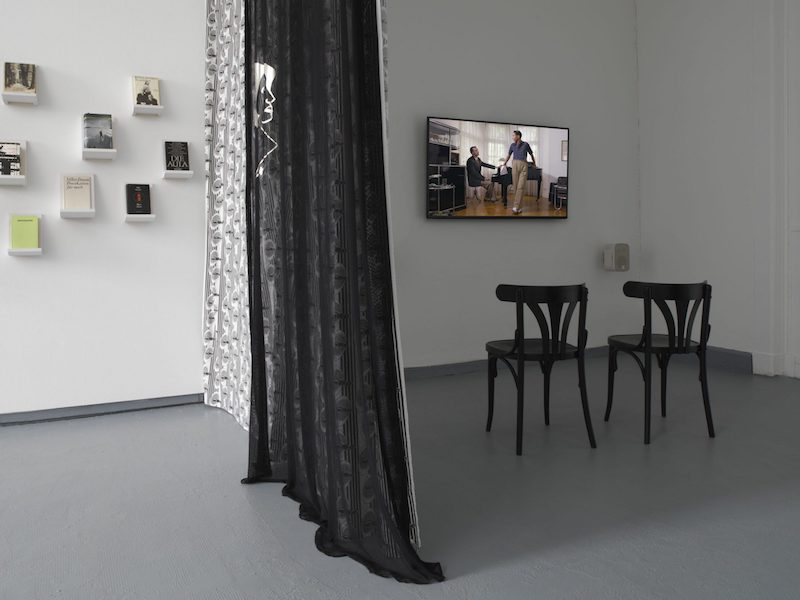 In line with the KPD’s call for women to write revolutionary cultural material for younger generations, Steffin wrote ‘Song of a Deck Boy’ as part of a children’s play. Even among circles known to have fought (unsuccessfully) against abortion and (successfully) for the women’s vote, it was often in a feminised, caregiving role that female writers were more likely to be encouraged. Many of Steffin’s further writings have survived only because her friend, the antifascist writer Maria Osten, also took care, nursing Steffin and, after her death, bringing a box containing her texts and letters to the Soviet archives. Two weeks later, Osten was shot as a suspected spy. After 1990, Steffin’s writings were integrated into the Brecht Archive in Berlin. It was there that Ina Wudtke was able to view a 1937 letter from composer Hanns Eisler to Steffin, containing a sketch for the melody of ‘Song of a Deck Boy,’ now reinvented by the Hermlins in Wudtke’s video work. The rights to the full composition are held by a separate GDR publisher whose archives were privatised after 1990, meaning that an exact reproduction of the original score would be extremely expensive. Such details demonstrate not only how an archive’s formation is contingent on acts of care, but also how its access can be restricted, including by economisation.

Brecht’s works are due to enter into the public domain in 2026, and, in this sense, the intervention ‘Greif zur Feder’ makes is well-timed. Beyond this, the body of work serves as a reminder that collective authorial processes are not discrete; they interact with—and indeed are from the outset embedded in—power structures that look to secure capital via a finished “product” and a single author. This can reproduce those very structural exclusions that collective working process aspire to overcome in the first place, including along sexist and class-based lines. ‘Greif zur Feder’ challenges archives of today and the future to remember collective authorship more intimately.