Adam Fearon’s practice is usually marked by an interest in materiality, or what he calls the “object-ness of the surface.” In his current exhibition at Ashley Berlin in Kreuzberg, he’s showing a series of paintings. These portraits, mostly of friends and fellow artists, continue his material investigations from another angle. Ideas around intimacy, community and a certain poetic softness are conceptually present elsewhere in his work, but really come to the fore in this exhibition. We spoke to Fearon inside his show at Ashley, where he elaborated on the connections between his paintings, his writing and his sculptural works, and how the tactility of technology—the touch, the swipe—can form a bridge between the digital and the physical. 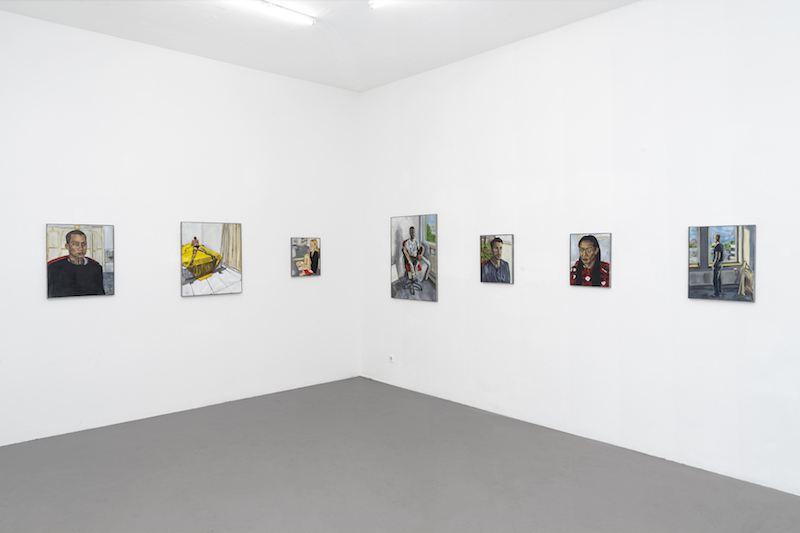 Alison Hugill: The exhibition at Ashley is described as a departure from your usual practice: can you talk about where the urge came from to make these portraits of your friends?

Adam Fearon: I used to paint when I was young, as a teenager. After my first year of art school, I stopped. As is the case with a lot of people, it didn’t make sense to me why the image should be a painting. I began working in different media. But my first understanding of art was through painting, so it was always kind of in the background in my practice, but more for sketching and exploring. Every now and again, I would do portraits for friends for their birthdays.

The first time I started drawing friends more systematically was in 2019, when I did a solo show in Ireland. The show took a long time and was based around technology and facial scanning. It was a huge process I was working on for six months. When I finished that, I had this urge to draw again. I did a series of about four or five drawings of friends. The show was about technology but also how it affects our relationships and our intimacies. So there was an urge after working in this kind of “cold” medium, to go back to something warmer.

Tacita Dean once said that drawing is the most analog technology because you’re literally making analogies, with your hands. It’s a way to route perception back through the body in a tactile way.

So when everything was cancelled in the first lockdown, I got more into painting again and asked my painter friends for advice, to get back up to speed. 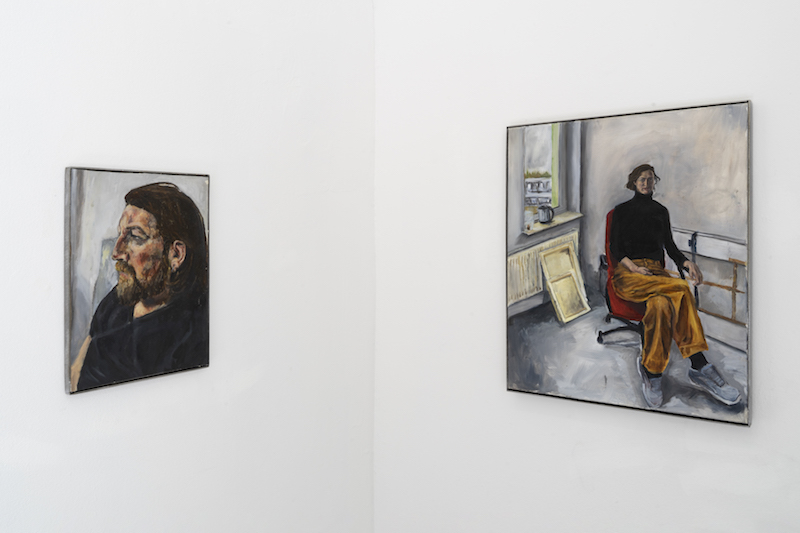 AF: There are a lot of writers and editors and artists here. It’s all about these natural relationships that build a community. I’ve worked with Caique Tizzi and John Holten a lot. In 2016, John and Raphaela Vogel and I organized a group show at BQ Galerie called ‘Augury’. The exhibition was about art and the future of writing. There would be readings and performances every Friday for five weeks, drawing on this extended network in Berlin.

With Caique, I run a project called Babes Bar. It’s a floating event where we invite artists to do something outside of their normal practice: not an exhibition, but something that has a social dimension, like a dinner, or a karaoke or cabaret night. It has a focus on the social aspect of the artistic community. It’s a chance for people to do something fun without worrying about how it fits into their wider practice.

AH: You also write essays. Do you see yourself as a writer? What role does narrative text and poetics play in your artistic practice more generally?

AF: Writing, reading and research are an important part of the work but I don’t exactly identify as a writer. I keep it quite separate from my visual practice. I try to avoid making video essays, for example. I try not to have a didactic relationship to my research. I want to keep the material investigations to their own logic. Of course they feed into each other but not in a way that I want to force. It’s only afterwards looking back that I can see how it all comes together. Keeping the separation is really important to me. I want the materials to have their own life. The research and writing around that is just a way to unpack or process the work from another angle.

I always refer back to this text that Anne Carson wrote, called ‘Economy, Its Fragrance.’ She talks about how the precision of language—the more concentrated it is—can reveal its materiality. Some research-based practices become quickly didactic and can close things down. That’s the opposite of what I want to do. I am focused on the materiality of language and the etymology of words—which I think maybe is its materiality, the way that time stays present in everything we speak. 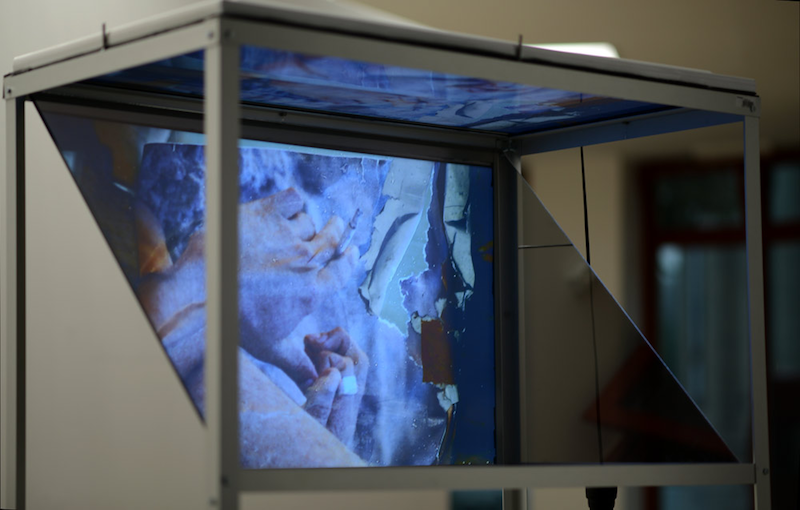 AH: In your piece ‘Prompt,’ you do a really tactile and poetic performance using wet paper on a kind of projector in the gallery. Can you say a bit about that piece?

AF: Yes, it’s quite related to the works at Ashley in some ways. In ‘Prompt,’ I used very intimate photos, close ups, of my partner, Caique. They had all been pulled from my archive. I made an apparatus—based on a teleprompter—on which I scraped the photos across. As they’re scraped they begin to tear. It’s not quite a violent action, but it’s loud and repetitive and rhythmic. A kind of soft violence.

The word I always come back to to describe my practice is “surface”: an exploration of the surface, its history and its materiality.

I’m fascinated by the walls of exhibition spaces, too, for example. They are like living, breathing skins. In my show ‘dipping’ at mi1glisse in Berlin, and also in my work at Städelschule, I was interested in how the plaster is built up, and painted over, and sanded down, over and over again. There’s this build-up from all the times the walls have been filled and corrected. So I wanted to emphasize that. I spent months in the studio doing mad things that no one would ever see, dealing with the skin or the surface of the room.

In my early work, I was also varnishing photographs and using them sculpturally. It was also a way to highlight the object-ness of the surface, where images are held and trapped. And the different meanings we imbue that with.

AH: You made an artist publication with Broken Dimanche Press, called ‘Gyricon’ which was specifically designed for e-book readers. Why did you choose that format?

AF: In ‘Gyricon’, I used an e-reader to display the work because of the way the screen works: it has physical molecules that get moved around by magnets or by electrical pulse. So it’s actually a physical image. If it breaks, whatever was on the screen stays there forever. The e-reader technology was invented in MIT Labs and the guy who invented the prototype used this word “gyricon” because it means “turning light” in Greek. Each pixel is either off or on, black or white.

It’s an in-between point between the digital and the material. The tactility of technology is interesting to me. The way that screens are touched and swiped. 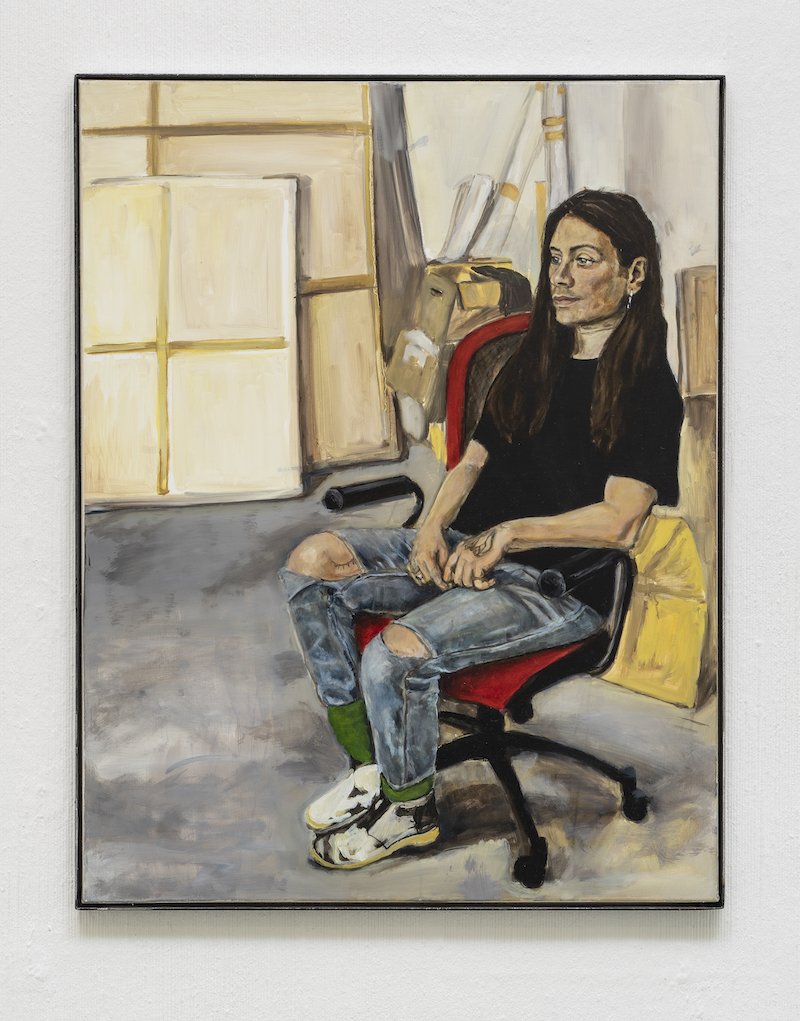 AH: Maybe your show at Ashley isn’t such a big “departure” from your other work. Doesn’t the act of painting connect to this quest for materiality?

AF: The materiality of the oil paint is definitely connected to my interest in the surface. These things are also very present in the paintings. There’s a haptic quality, just like in ‘Prompt’ or ‘Gyricon’. The reason I chose to do portraits was partly because it’s a genre where you can just do it and it bypasses all the discourses and concerns about what it means to be a painter now. If I had been given carte blanche for the exhibition, I am not sure I would have shown these portraits. But that’s also because they weren’t “work” for me. They are about community, and spending time with people.