Solistenensemble Kaleidoskop and multi-disciplinary artist Black Cracker—who is known for his works in sound, text, video and installation—will present their first joint work, ‘A Ballet of Slug and Shell.’ The piece is a commissioned work celebrating the 200th anniversary of Konzerthaus Berlin, which was originally set to be shown live in April 2021. The stage version has now been adapted and recorded with 360° cameras for a special video version, available on July 15th for free on kaleidoskopmusik.de. 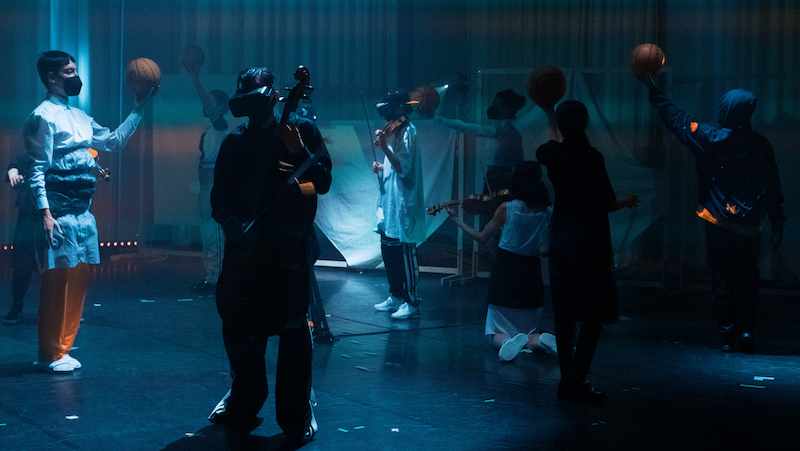 The thematic and musical starting point for the 7-act performance was a critical reflection around ‘Der Freischütz’ by Carl Maria von Weber. In ‘A Ballet of Slug and Shell,’ Black Cracker and Kaleidoskop start a dialogue about community, practice exchange, privilege, taste, violence and discomfort. On this search for aesthetic perspectives on hierarchy, structural oppression and discrimination they question each other about their own artistic origins and traditions.

‘Der Freischütz’ by Carl Maria von Weber is seen by some as the “German national opera,” first performed in 1821 and premiered at today’s Konzerthaus Berlin. With its romanticized image of rural community it offered a projection surface for German longings for identification and was quickly stylized as a musical “national treasure.” From the critical reflection and deconstruction of this artifact of German “Leitkultur,” Kaleidoskop and Black Cracker span the arc to an examination of their own privileges, learned traditions and the elitism of classical music and negotiate spaces and multilateral communication.

With a stage setting made of modular wooden structures, basketballs, string instruments, flags, video projections, white sheets and augmented reality, Black Cracker creates a constantly changing landscape. The ensemble and three performers plunge into moments of not only kitsch, but distortion and grace, within deconstructions of the overture from Freischütz. To swirling ambient electronic sounds, they explore constellations between confrontation and cooperation. Thanks to a 360-degree camera perspective, the audience can choose their own viewpoints through the piece.