After six years of renovation, the Neue Nationalgalerie will reopen its doors to the public on August 22nd. Berlin-based artist Rosa Barba has received the honour of its inaugural post-reconstruction exhibition. Under the title ‘In a Perpetual Now,’ Barba will present a collection of major works made between 2009-2021, as well as a new film created specifically for the exhibition.

German-Italian visual artist and filmmaker Rosa Barba is best known for using the medium of film and its materiality to create cinematic film installations, sculptures and publications. Situated somewhere between experimental documentary and fictional narrative, her practice inquires into the nature of reality, memory, space and time. Her work encompasses architecture, geography, sculpture, performance and film. By investigating environments and weaving stories of people and the places they inhabit into fictitious narratives, Barba creates a third space that opens up new possibilities for interpretation. 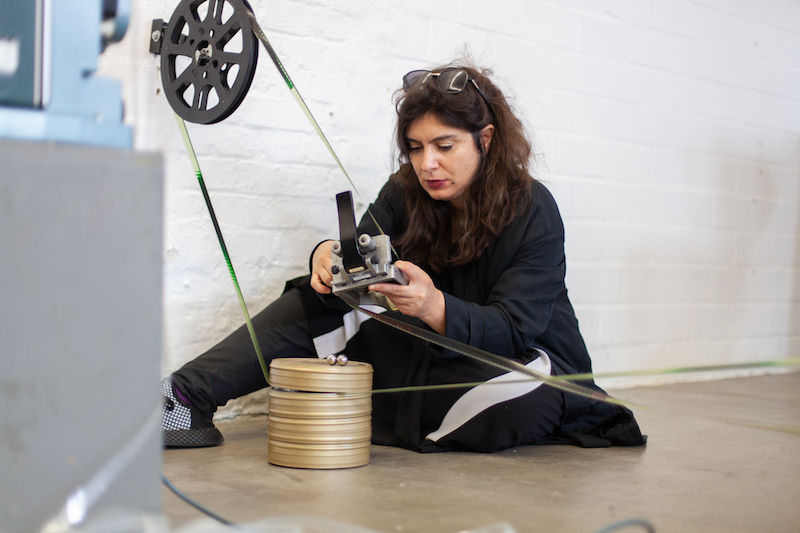 Mentioned in the same breath as contemporary artists such as Matthew Buckingham, Ben Rivers and Tacita Dean, Barba’s engagement with analogue film and filmic materiality poses questions about our understandings of time and space. Neue Nationalgalerie’s inauguration gave us the perfect excuse to visit Barba at her spacious studio in Wedding. Barba tells us that the studio is more bare than usual, since many of the pieces have already been transferred to the Neue Nationalgalerie and some are still on display at Esther Schipper for her exhibition ‘Fixed in Fleeting: Performative Objects and Tape Journals.’ The space still seems brimming with artworks, though. Before exploring the space, we first sat down with Barba to get a better glimpse of her artistic practice. The first thing that catches the eye is the abundance of books in the room. The bookcase on the right side of the room, beside the sofa and chairs, is filled with books, but there are also stacks lying all around the space. Before embarking on a project, Barba usually engages in extensive research. She also holds a professorship in Fine Arts at the University of the Arts in Bremen. 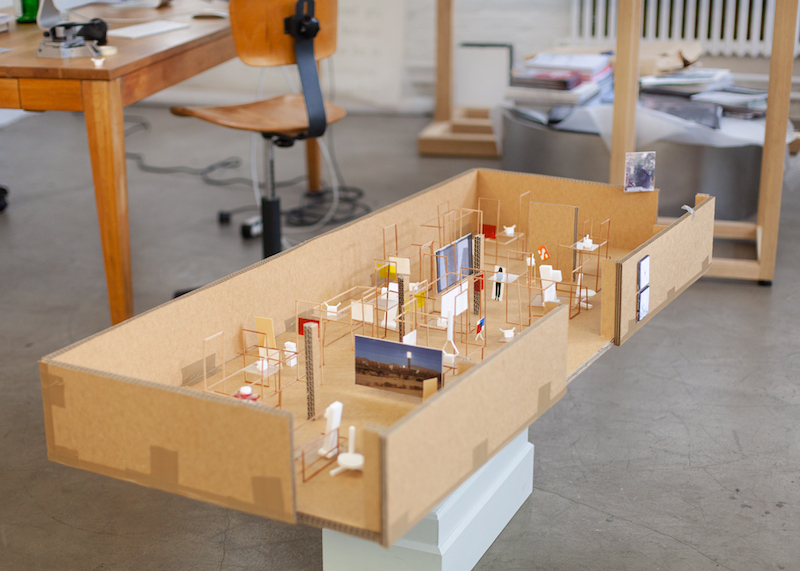 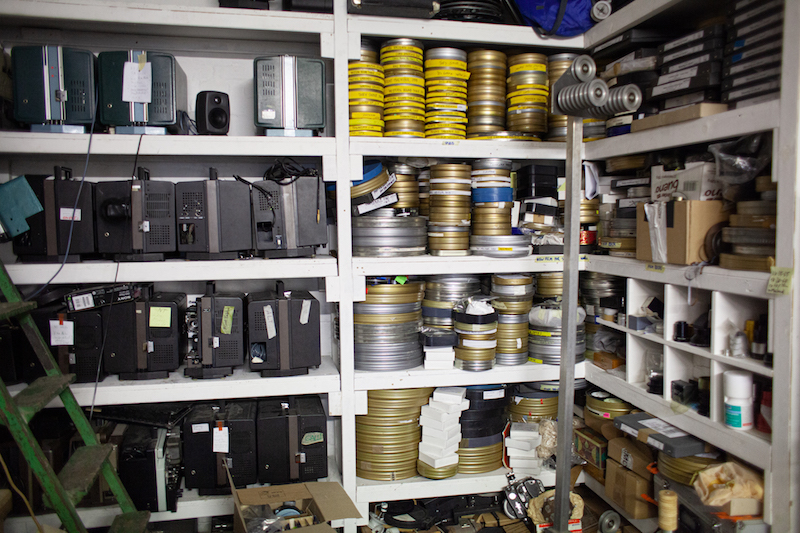 To get a better sense of Barba’s artistic oeuvre, we took a journey in time together and went back to the very first film that she made. ‘Panzano,’ a 16mm film made in 2000, tells the story of a group of elderly people who live in an impoverished, rural home in a town of the same name in the Chianti wine region of Tuscany, Italy. Barba’s deconstructionist approach is evident in her first film as well. ‘Panzano,’ a collaboration with Ulrike Molsen, follows the story of its three schizophrenic protagonists in a setting where the fundamental elements of filmmaking become delicately at odds with one another, creating a narrative that disrupts fictionality and disturbs the viewer. Made as an investigation into the Italian health system, ‘Panzano’ was Barba’s first encounter with the medium of film and her realization of it as a “powerful instrument.” Having started with analogue photography, Barba realised that the moving camera with its shape and sound has the potential to give ordinary people the chance to transform and take on the role they wish to perform. She also mentioned that ‘Panzano’ was the starting point of the importance of “collective performance” that is crucial to her works. Refusing to work with professional actors, Barba’s films always portray ordinary people who have a connection to the space they inhabit and add their own history to it.

What attracts my attention is a projector standing on the left side of the studio space. ‘Boundaries of Consumption’ is a sculptural film work that Barba initially made in 2012 and will also be exhibited at the Neue Nationalgalerie. It consists of transparent 16mm film, a modified projector, film canisters and two metal spheres. We move towards it and once Barba turns the projector on, the noise makes it difficult to concentrate and listen to her explanations. The projector on the floor plays a loop that runs through a stack of film canisters while the drum continuously tips back and forth. This brings about the random movement of the two metal balls that sit on the surface. The actual film then is the shadow of the metal balls dancing around. Created as what Barba describes as “an experiment of balance and live performance,” ‘Boundaries of Consumption’ poses questions of what film actually is and how the instrument of filmmaking can be used to generate a new format. 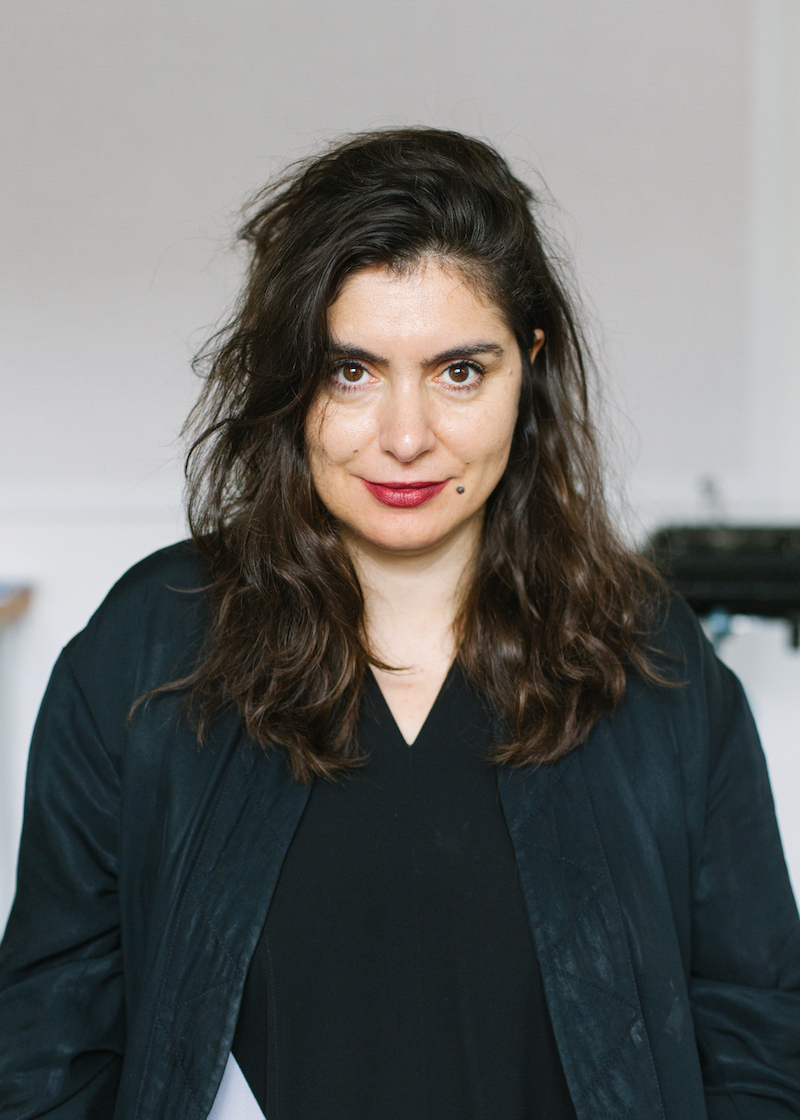 Hanging next to ‘Boundaries of Consumption,’ on the wall, is a huge picture. ‘Time Machine’—a silk-screen print on canvas made by Barba in 2007—is another good example of Barba’s fascination and engagement with language in her works. It is a screenplay for a 90-minute film written by Barba and based on 11 failed, unrealised film scripts of the 1895 eponymous novel by H. G. Wells, which was influential for the development of science fiction. This is a typical example of Barba’s oeuvre, where film and text are so intertwined with each other that the lines between them become blurry. ‘Time Machine’ is an investigation of the cinematographic language and medium. By impressing Wells’ text on the surface of a white canvas, illuminated by a white spotlight as well, the sci-fi novel is transformed into a script.

Walking farther down the room beside the windows, there is a pile of journals and magazines on a round table. Barba showed us the collection entitled ‘Printed Cinema,’ which she started in 2004 and which celebrates its 22nd edition this year by the independent publishing platform, Dancing Foxes Press, Brooklyn. The series, which won the 2006 Artist Book Award at the Ontario Association of Art Galleries, is printed alongside Barba’s film projects. It creates supplementary literature and includes research material and unused filmic fragments. As a “readable and portable film,” ‘Printed Cinema’ aims to express and at the same time dismantle the cinematic organism. 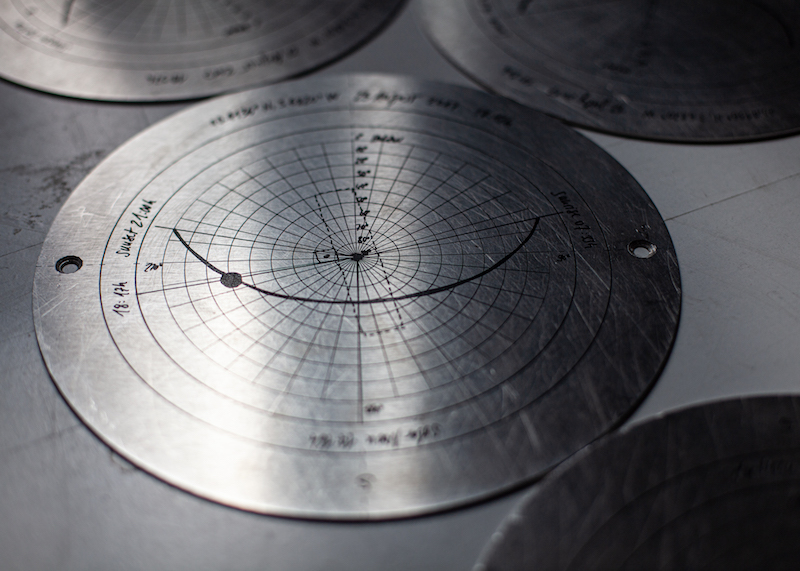 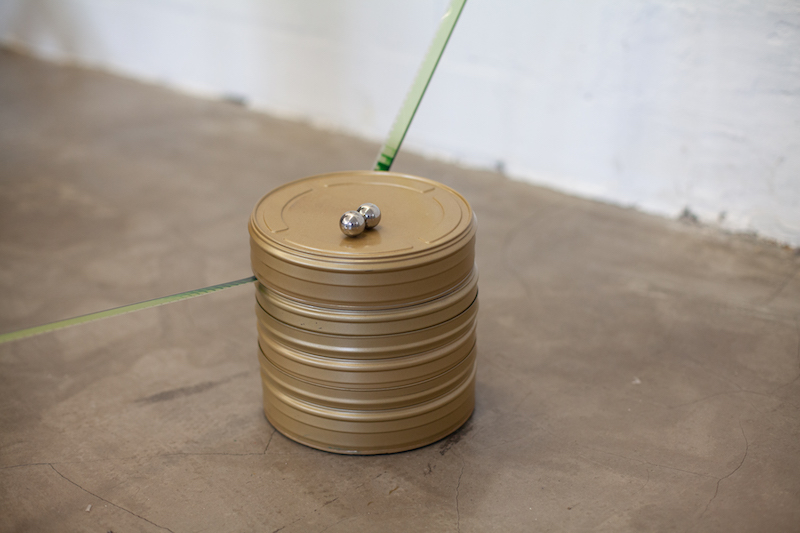 Time—a recurring protagonist and tool in Barba’s oeuvre—is an attempt to examine and understand the world around us. What interests me is to know how Barba’s own understanding of time has evolved throughout her prolific and versatile career. “I understand time as an accumulation, an archive, rather than a linear progression,” Barba says. She explains that “to move between times, I often use cinema in order to stage an intervention in a real space, confronting the division between public and private, fantasy and reality. This allows me to navigate the past and merge it with present and future desires or preoccupation.”

This circularity is achieved in her works with recurring layered themes, looping devices for endless material carrying narratives of inscriptions, and circling camera movements. ‘Aggregate States of Matters’ (2019) is a good example of the non-linear understanding of time. Shot in the Andes, in Peru, this large-scale 35 mm film installation brings to light the ambiguous relationship between humans and nature by highlighting the increasing impact of climate change. Barba herself has described it as, “an investigation through layers of time and hidden interpretations inherent in unearthing the past, a metaphorical excavation that is interwoven in a new narrative, waiting for new meanings through images.” 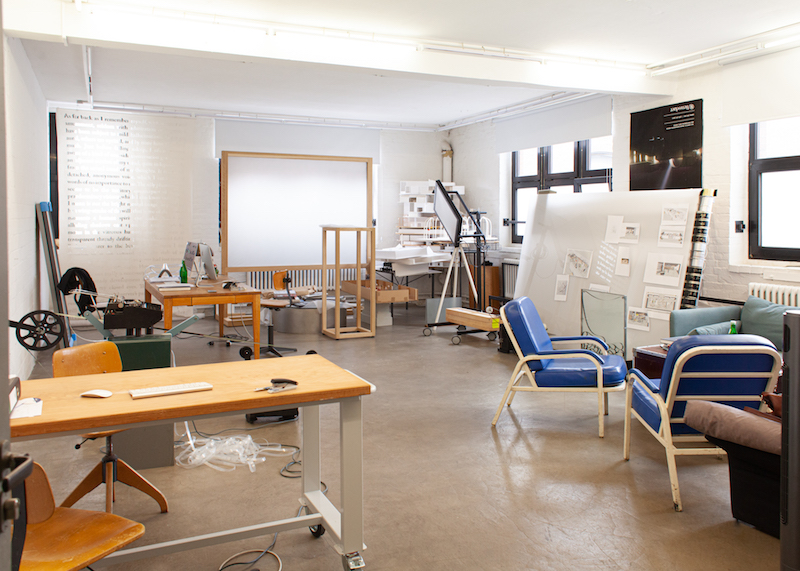 The Neue Nationalgalerie’s reopening is the hot topic of the day in artistic circles. We were also curious to find out more about what will be on display for Barba’s solo exhibition there. Inside the newly restored iconic building that Mies van der Rohe completed in 1968, 15 of Barba’s cinematic and sculptural works will be presented to the public. ‘In a Perpetual Now’ will also bring back to life an unrealized project from 1924 by Mies van der Rohe. ‘Brick Country House’ (Landhaus in Backstein)—a country house conceived for Neubabelsberg—is an early piece by the German pioneer of modernist architecture that presents visionary ideas about architectural forms and constructions. By borrowing the architect’s rhythmic design, Barba translates the never-materialized floor plan into a set of interconnected metal structures that will host her artworks.

“A constructivist vertical stage,” to use Barba’s words, the stage frames play with the museum’s architectural vocabulary and are designed to have the same dimensions as the windows of the institution—an installation concept that Barba has performed in the past for ‘Blind Volumes’ (2016) at Schirn Kunsthalle in Frankfurt. Films, sound pieces and sculptures will be installed in an intense proximity, creating “a sense of orchestration.” Specific artworks will be seen from different sides of the museum, so that one cannot see the exhibition in its entirety at the same time. There will also be an open space between the works, giving the visitor the chance to walk between them resulting in a more interactive engagement.

We then moved on to discuss some of the individual works that will be shown at the exhibition. The unreleased ‘Plastic Limits – For the Projection of Other Architecture’ (2021) is a 35mm film set in dialogue with Mies van der Rohe’s concept of architecture as a new form of life. It portrays architecture not merely as a three-dimensional space, but also a temporal process that is constantly evolving. An examination of Berlin’s urban space, the film is accompanied by an optical sound proposed by Barba herself and interpreted by a number of musicians. 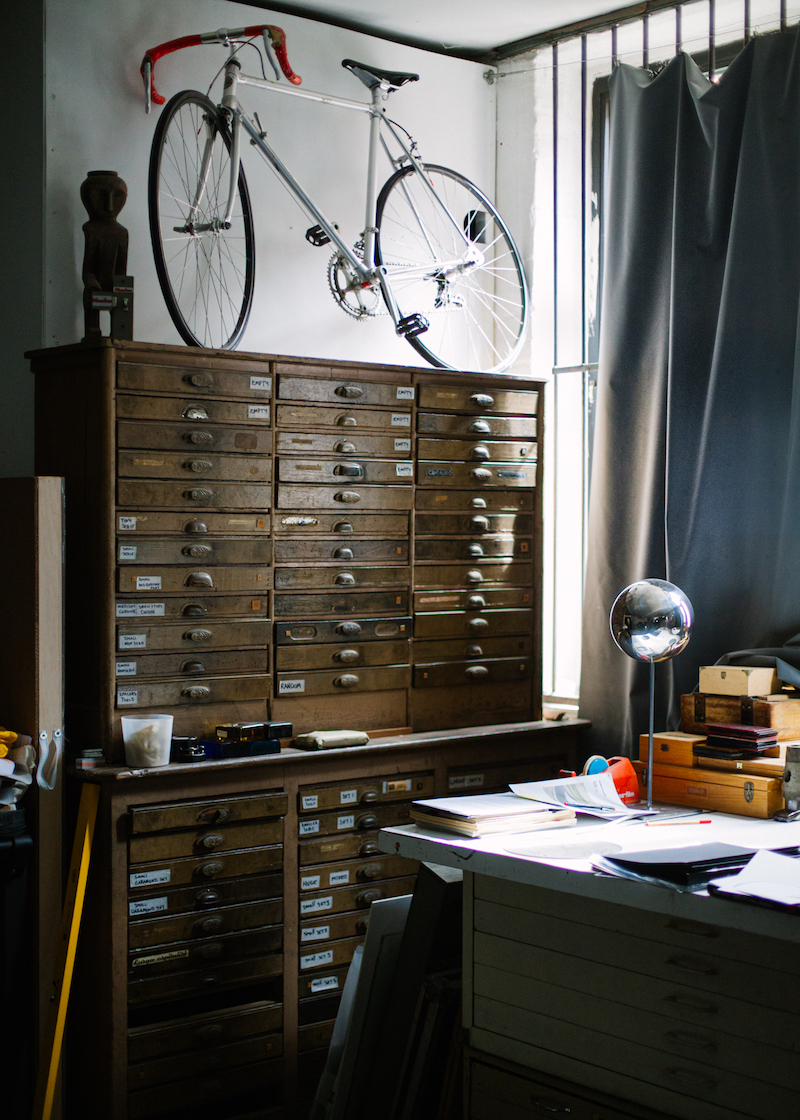 ‘From Source to Poem’ (2016) is another of Barba’s films that will be shown in the exhibition. Shot in the United States, this 35mm film features images from the largest media archive worldwide—the Packard Campus for Audio-Visual Conservation of the Library of Congress, located in Culpeper, Virginia. By shifting the focus from the artwork to archival storage, ‘From Source to Poem’ juxtaposes images from the media archive with a study of rhythm and images of cultural production. It is, therefore, “an invitation to think about the spaces in which history and cultural production are preserved in order to be passed onto future generations,” Barba mentions.

Made in Alexander Calder’s studio in Roxbury, Connecticut in 2017, ‘Enigmatic Whisper’ is yet another of Barba’s films made available to the public at the exhibition. Shot in 16mm, the film draws a filmic portrait of one of the most prominent sculptors in art history. Through images of tool and work materials, still conserved as Calder left them, as well as the natural external context, ‘Enigmatic Whisper’ focuses on one of Calder’s most iconic kinetic sculptures (Untitled, 1968) that still hangs from the ceiling of his studio. The recipient of the Calder Prize in 2020, Barba’s exhibition is also simultaneous with ‘Minimal/Maximal,’ which traces the special relationship between size, scale and spatiality among Calder’s works.

A fruitful and multi-disciplinary artistic practice spanning over 20 years makes it difficult to put an end to the conversation. As we leave the studio, elated by the enriching exchange with Barba, we look forward to seeing her upcoming exhibition.