It’s difficult to place oneself in relation to the shadow cast by the ongoing pandemic. Are we almost out from under its gloom, or will it forever hover in some form above? In this context, the new exhibition at Art Laboratory Berlin ‘Under the Viral Shadow’ explores “the viral” not only in a number of highly localized, specific ways, but as a broader concept across social, technological, and biological systems. From artificial intelligence programming to slime mould topologies, the works presented cohere in the question of how forms of connectivity—between the living and nonliving alike—have been altered and are responding to a pandemic-changed world.

Entry to the gallery requires you to pass the threshold between the two objects that comprise Benjamin Bacon’s ‘PROBE Series II: Subaudition,’ a set of extra-planetary apparatuses that apply machine learning methods to decode spoken word into kinetic energy, sound and light. What is created is a “frequency network-based ecosystem” of which machines, humans, and other environmental noise are all a part. Squarely in the center of the room, the reflective gold figure vaguely resembling the infamous robotic droid R2-D2, loudly clicks in response to the speech of anyone in the gallery, while transmitting information to the second object nearer the door, which lights up in various patterns in response. Two partial mannequin figures stand nearby along the right wall, each with wearable technology across the chest, making up Vivian Xu’s ‘Skin Series.’ The wearables consider the evolution of human-technological hybridity, here in the service of enhancing the sensorial experiences of the skin to include the ability to sense electromagnetic fields or project directional sound in relation to the environment. 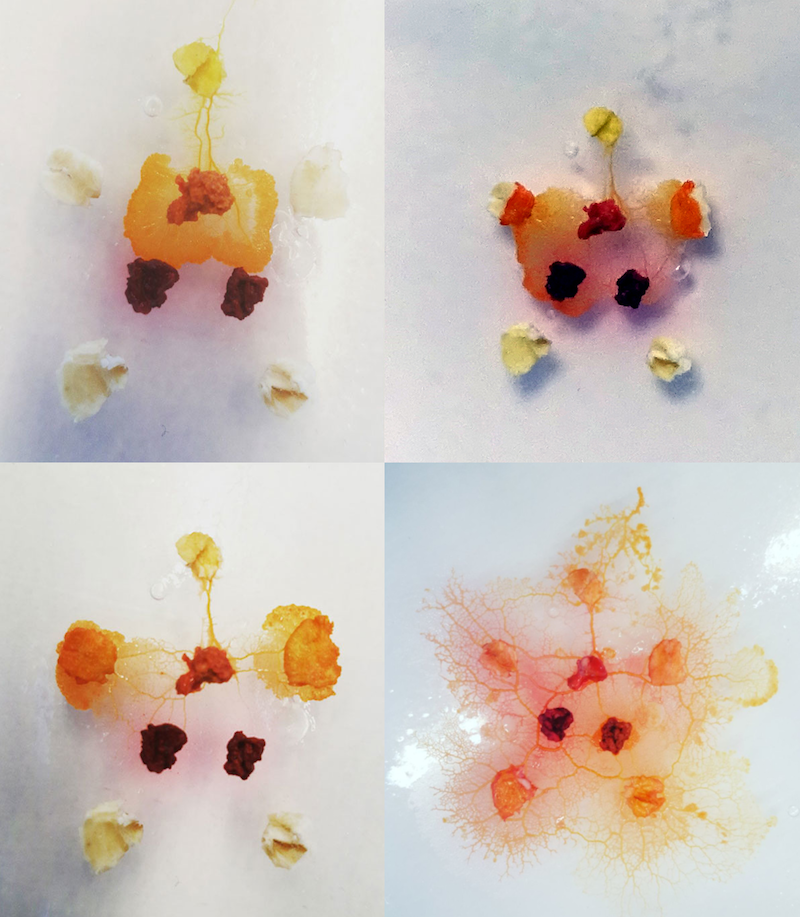 Many of the works share a responsive element to the spectator, wearer or user; Gene Kogan’s ongoing ‘Abraham’ project is accessible by using a computer at a desk along the left wall. Visitors are invited to contribute to the production of an “autonomous artificial artist” by inputting phrases that invite Abraham to then create a digital artwork with the phrase as the title of his piece. In the dimly-lit back room of the gallery-space, Sarah Grant’s installation ‘Physarum Topolgies’ consists of a square of podiums each individually lit and equipped with sensors to respond to the movement of people nearby. The installation is also an experiment with slime moulds, each arranged in relation to a food source and according to classic network theory topologies. Again, viewers are invited to consider the relation between (weird, even unclassifiable) biological and technological networks mapped onto one another, and are welcomed to revisit the installation to see how the moulds develop over time. 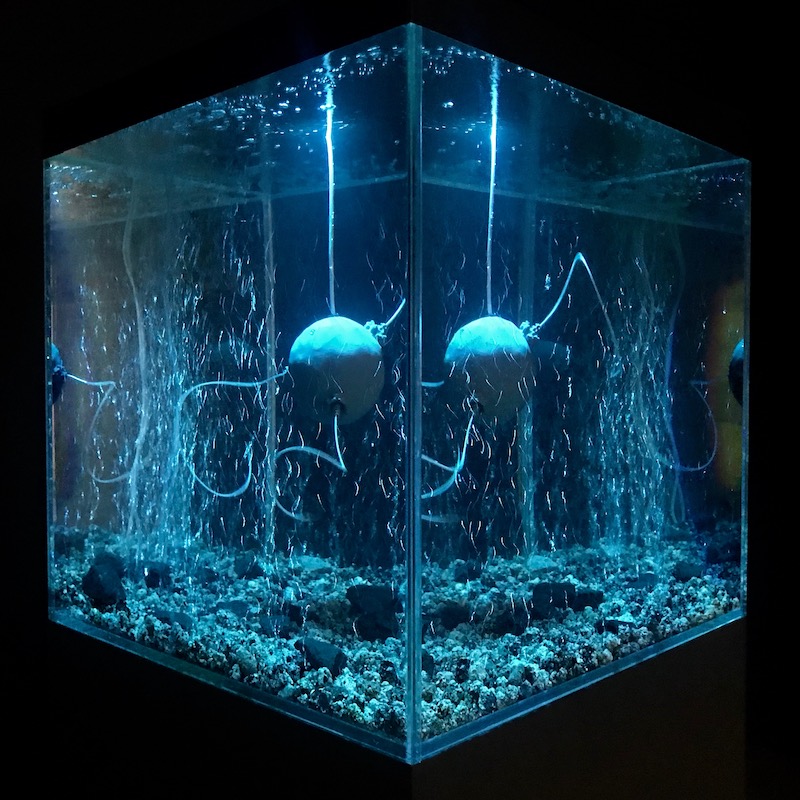 Anna Dumitriu’s solo contribution to the show, ‘Engineered Antibody,’ is displayed on a black background as another kind of wearable, beaded, neck adornment. The piece explores the field of synthetic biology and takes the form of a necklace based on an antibody purified from the blood of an HIV-positive patient. Stringing together 452 hand-made beads, the piece represents the actual and exact protein structure of the engineered antibody. Dumitriu’s collaboration with Alex May, ‘ArchaeaBot: A Post Singularity and Post Climate Change Life-form’ is perhaps the hidden star of the show, tucked away in the back of the gallery space behind a drawn curtain. The 3D-printed underwater robotic ‘Archaea’—an ancient micro-organism believed to be the oldest life-form on Earth—floats and bobs around, its tails (a sprouting that signals a distressed organism) spinning and cramped against the walls of the tank. The piece asks us to consider the difficult question of whether there might be some organisms that actually benefit from the largely devastating effects of climate change, and what forms of life, in this case the most ancient, may also be the most capable of surviving the ecological catastrophe that is humankind’s presence on the planet.

There is no doubt that we are still living under the shadow cast by the virus COVID-19. More than confronting the virus directly here, the exhibition ambitiously takes a different approach by curating works about viral networks and systems more broadly, as a way to complicate emergent forms of connectivity and infectiousness in all of their complexities.