In English, as well as many other languages, the future perfect tense provides a unique linguistic opportunity: to describe the future as a thing that has already passed, thus affecting the horizon of possibility. “By this time tomorrow, I will have finished writing this article.” It’s both hopeful and anticipatory, and offers a sense of future completion within the present. In short, this modality allows us to complicate the linearity of time, and shift fluidly between past, present and future. 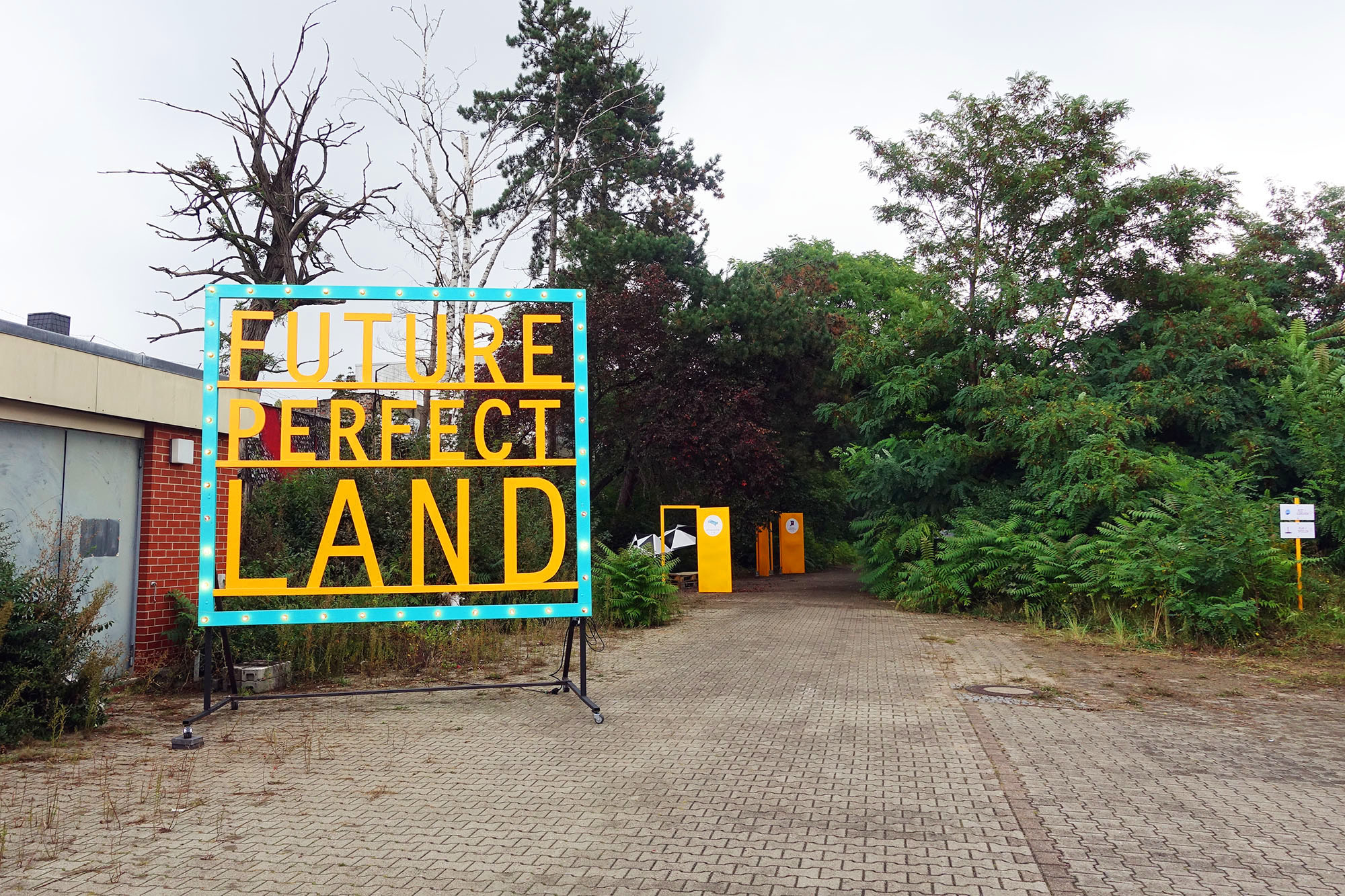 It’s precisely this time-shifting that the curators of FuturePerfectLand, billed as “a funfair for speculative realities,” are hoping to evoke with their interactive exhibition at Monopol Berlin, running every weekend until the end of September. Through a series of fun fair “rides”—seven temporary installations dotting the grounds of the former distillery in Reinickendorf—the artists involved in the project create scenarios, the experience of which forces the visitor to continuously re-orient themselves in time. The future is not often presented as a dystopian one, despite the nod to climate crisis in the literature surrounding the event. Instead, there is a decidedly analogue remembrance of a time past that haunts many of the installations, giving them a retro-futuristic quality and inviting a kind of nostalgia that extends into the future. Remember when we grew our own food? When nature was populated by endless species of creatures and insects? When life on Mars was just a pipe dream? 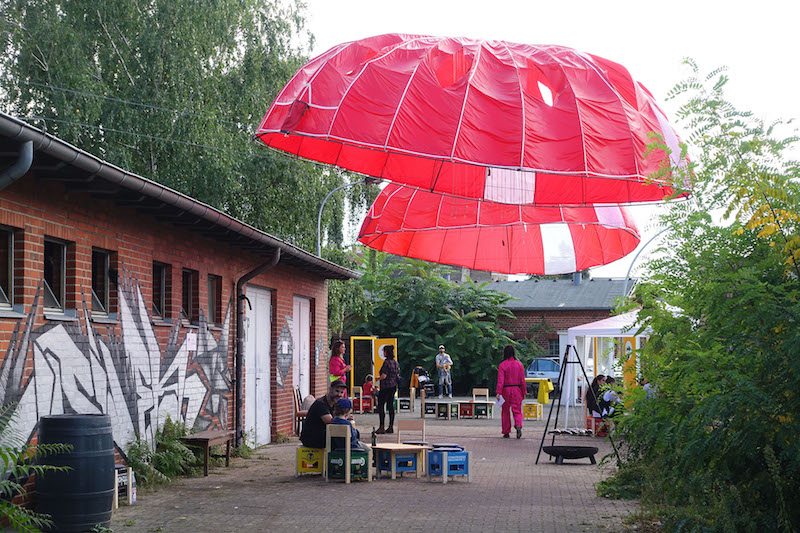 The funfair attendants are dressed in brightly coloured jumpsuits. At the door, we get a ticket that reads “SHORT TRIP…Loss of this ticket may results in loss of remembering when you are.” In a brief introduction, we’re told that the operative mode at FuturePerfectLand is time, not space. A series of sound installations, topped with see-through umbrellas, line the path into the fair, accompanying us with the familiar sound of a storm brewing in the distance. The work, by William Russell, is echoed later inside the funfair, where loud frog croaks emanate out of an old, overgrown dip in the landscape. The familiarity of the sound, like that of the storm, is amplified in the space, making it both comforting and disorienting. 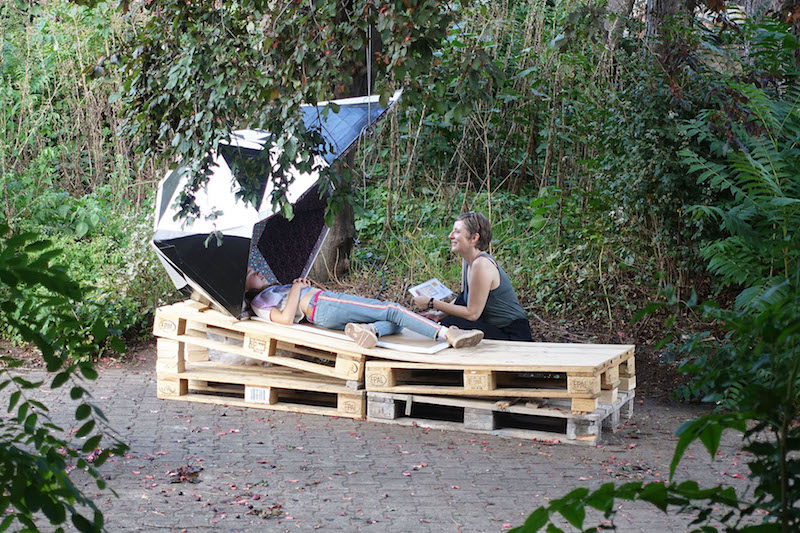 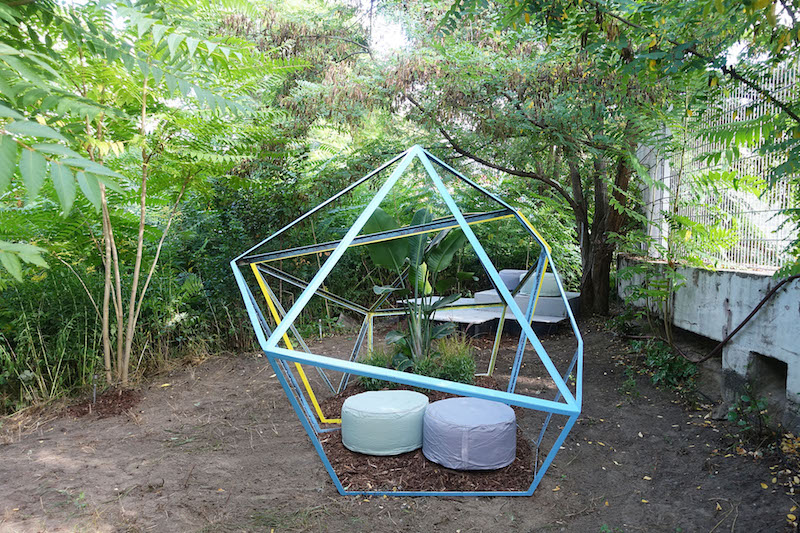 Fortunately, in moments of disorientation, spaces of rest pop up along the course. One of these, a series of pieces called ‘Aestivation Stage’ by Christoph Rothmeier, proposes that “having spent nine months per year asleep, we will have saved resources and secured the survival of generations of people.” Curl up inside the pod, listen to the soft soundscape, stay for the winter.

Near the entrance to the funfair, artist Gabriel Vallecillo Marquez presents an opportunity to reconnect with ancestral knowledge, borrowing a healing ritual from the Lenca indigenous people of northern Honduras. A circular pattern of flowers and candles surround a rotating seat, on which visitors can enter the VR world created by the artist. It’s an apt starting point for the funfair as a whole, as the virtual setting propels us into thinking about cosmic questions and the never-ending cycle of life and death. 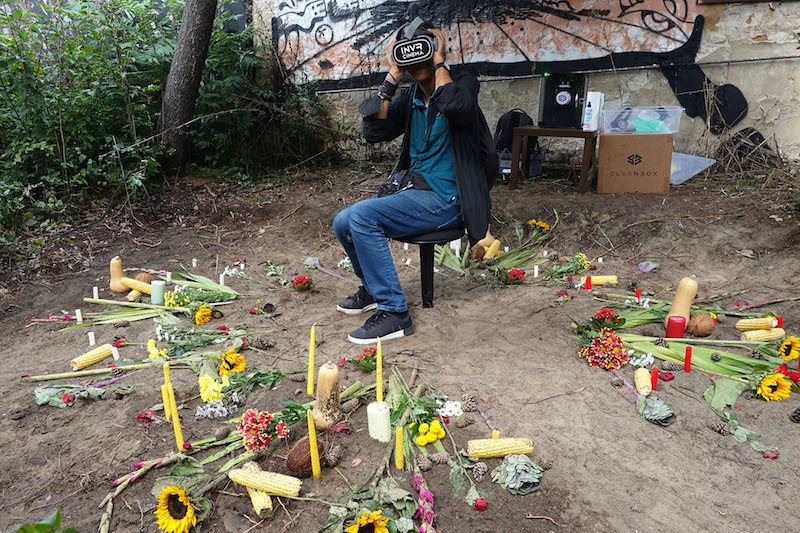 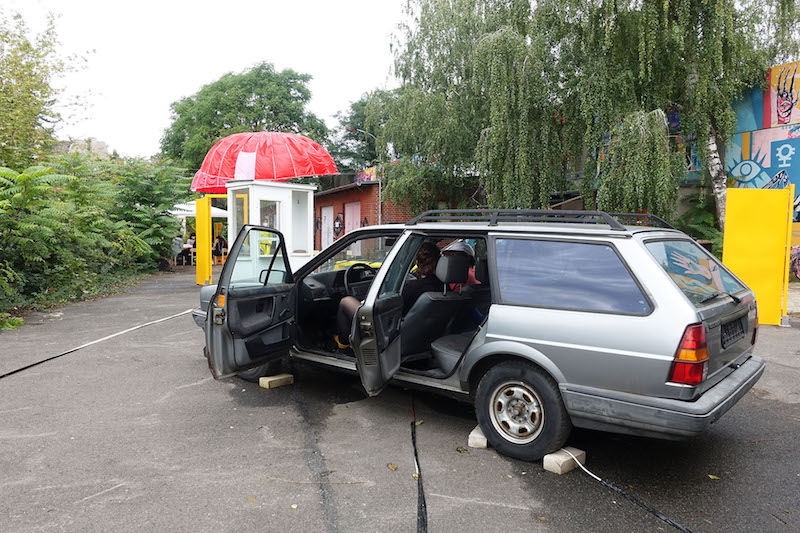 Further down the path, Jorge Castillo Chavarria launches us into a future scenario, after humanity has ceased to exist. A nearly empty phone booth, save for a small radio, and an old car with its doors wide open, seem to have been abandoned in an apocalyptic mass exodus. The radio in the booth and the car both play an AI-generated news bulletin on loop. The AI, Chavarria explains, will have continued to create content on its own, in the event that humanity does reappear. The bizarre speech is uncannily both recognizable and nonsensical. 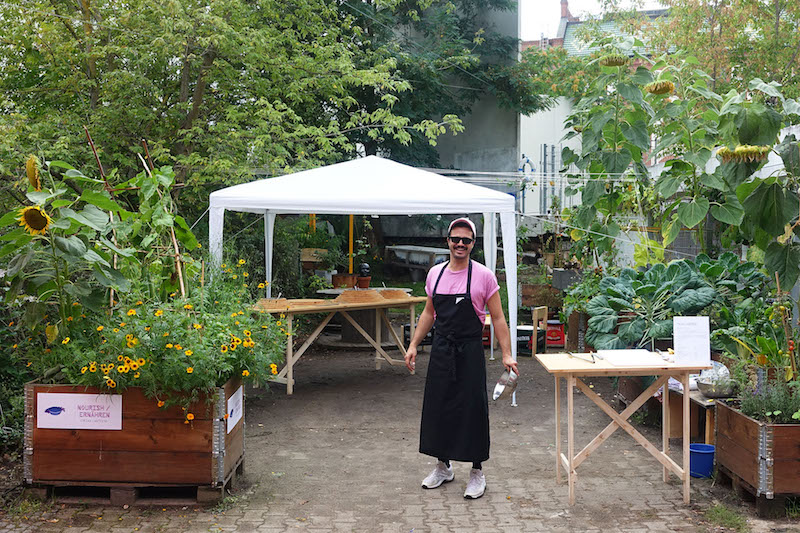 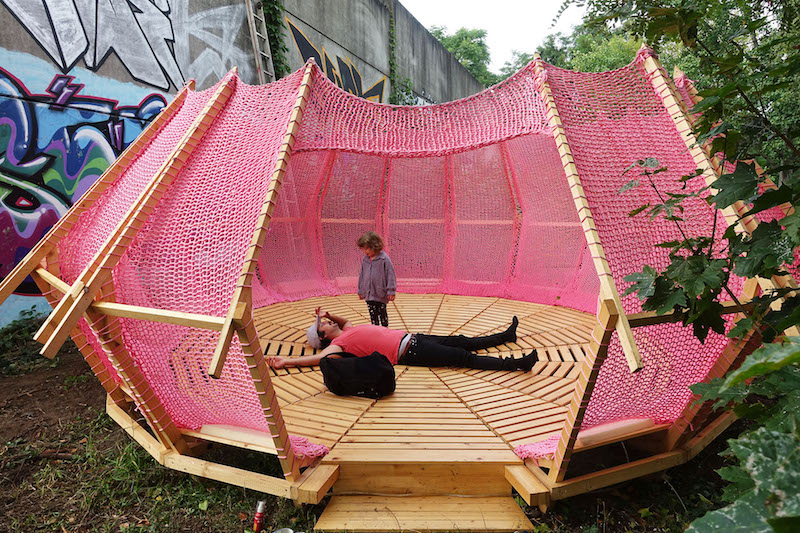 Starting to lose our sense of when we are, we come to an oasis, in the form of ‘Nourish’ by Raul Kirchhoff and Caique Tizzi. The colourful meal—bright pink, green and orange purees served on top of a perfectly tenderized aubergine—replenishes us for more exploration ahead. Tucked around a corner, we spot Shelley Etkin’s piece ‘Landing,’ a fuchsia, woven, UFO-style shelter with wooden floors and an open roof. In it, we’re told, one lucky visitor per hour will have the chance to go deep into their mind’s eye, in a guided journey that unfolds like a lucid dream.

Leaving the funfair, a tall ladder with a sign that reads, simply, “PLAY” catches our eyes. The sound of a flowing fountain in a large water tank draws us up the ladder for a look inside. At the top, a yellow corrugated pipe runs from our faces down into the water, inviting us to add our voices to the mix. An echo resounds and the water fixture is triggered, stopping and starting according to our interaction. After experiencing many of the artistic interpretations offered in FuturePerfectLand, we can add our own to the mix: shouting, whispering or singing our wishes into the watery void.

You can follow the instructions below to win 1×2 complementary meal tickets for Raul Kirchhoff and Caique Tizzi’s ‘Nourish’ station when you visit FuturePerfectLand. 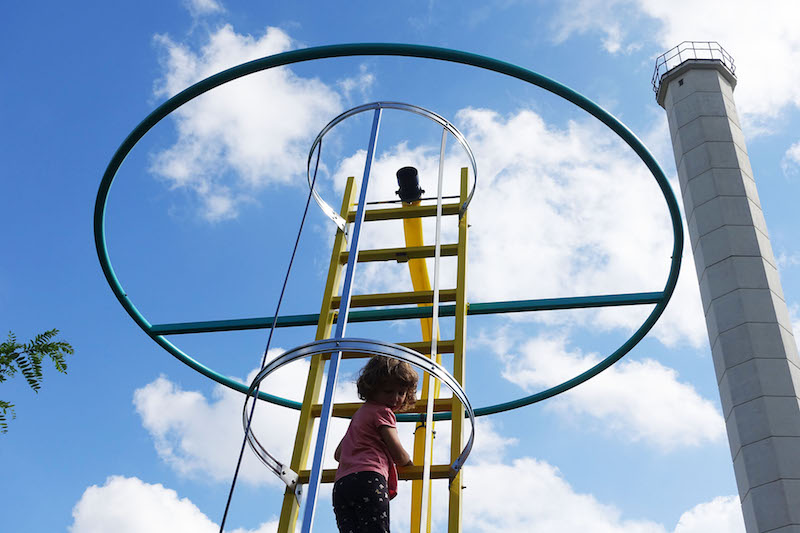