The works of the Rome Prize winners of 2019/20—nine artists selected by four different juries of experts to undertake a fully-funded residency at Villa Massimo in Rome—are presented for the first time this year at Schloss Neuhardenberg, near the Märkische Schweiz. Visitors have the chance to take a walk around the spacious grounds of the castle in Neuhardenberg over a period of seven weeks and interact with the artworks on display. The presentation at the castle marks the beginning of a longer-term project by the director of Villa Massimo, Julia Draganović, in which the works of the Rome Prize winners will no longer be shown exclusively in Berlin, but in various regions of Germany.

Located about 70 kilometres east of Berlin, Neuhardenberg Castle comprises a complex of neoclassical buildings that represent a homogeneous architectural unit. The ensemble includes the castle itself, an English-inspired landscape park, a hotel, a former distillery, an orangerie, two cavalier houses and its own church named after its architect. Karl Friedrich Schinkel—one of the most prominent architects of Germany—not only remodelled the castle in the 19th century, but also designed the local church. The Castle belongs to the Neuhardenberg Foundation, which offers an extensive cultural program of theater performances, concerts, literary readings, talks, and exhibitions throughout the year. 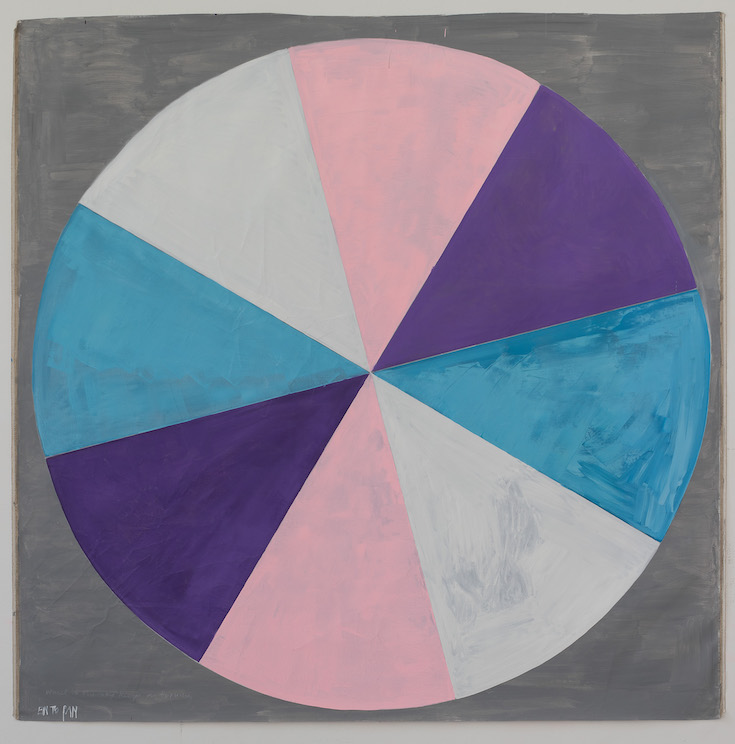 The exhibition at Schloss Neuhardenberg is divided into three main areas: indoors, the artworks adorn the walls of the main exhibition hall and the small orangerie, and outdoors they are dispersed across the expansive park. We start our tour by taking a stroll around the park to get a sense of the place first. Voted by an independent jury as “Germany’s most beautiful park” in 2004, the grounds do live up to their name. Designed by Peter Joseph Lenné, whose work shaped the development of 19th-century German garden designs in the Neoclassical style, the landscape park is in perfect harmony with its surroundings. The black inscription GRATIA REGIS (Thanks to the King) on top of the snow-white castle is a reminder of the fact that the estate was a gift from Frederick William III, King of Prussia.

After the initial acquaintance with the space, it was time to explore some of the artworks. In the main exhibition hall–which is itself divided into 3 rooms–we find works by the German painter Tatjana Doll and the Turkish-born, Berlin-based artist Esra Ersen. A sense of sparsity and minimality dominates the first room. Its spacious walls are adorned with only three large-scale oil on canvas paintings by Tatjana Doll: ‘Kapuzenmänner’ on the left, ‘En To Pan’ in the middle, and ‘Shaka Zulu’ on the right. All three paintings have pink and gray as their main colours. The colourful painting ‘En To Pan,’ Greek for “everything is one,” draws our attention immediately after setting foot in the main hall. The painting portrays a circle divided in eight in four cold colours on a grey square background. Inspired by the motif t-shirt print of a deceased friend, ‘En To Pan,’ is a simple yet profound reminder of the unity and connectivity of all living creatures. Tatjana Doll searches far beyond the conventional boundaries of her chosen medium in her artistic explorations. An essential aspect of her work lies in the exploration of the socio-political contexts of her subjects, which she then translates into large-format lacquer and oil paintings. By experimenting with collective symbols and icons, as well as motifs of our daily reality, Doll adds another layer to our understanding of everyday phenomena. 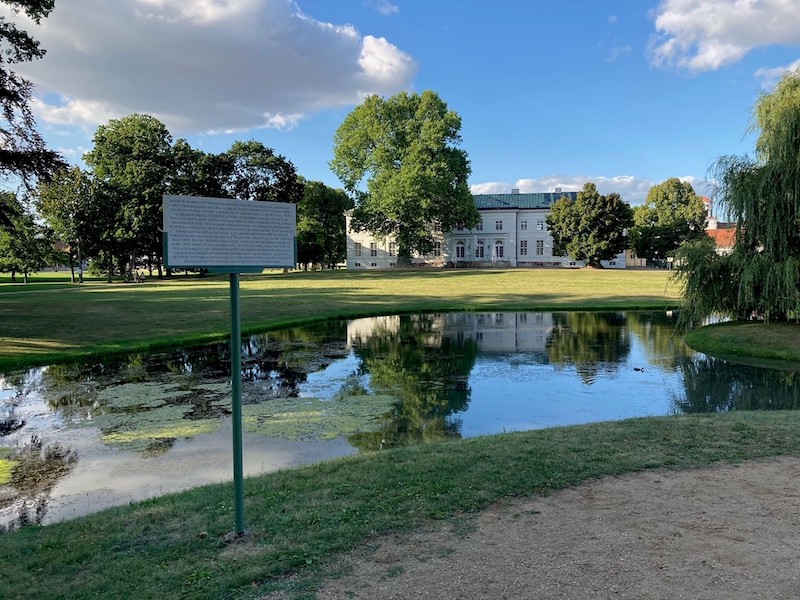 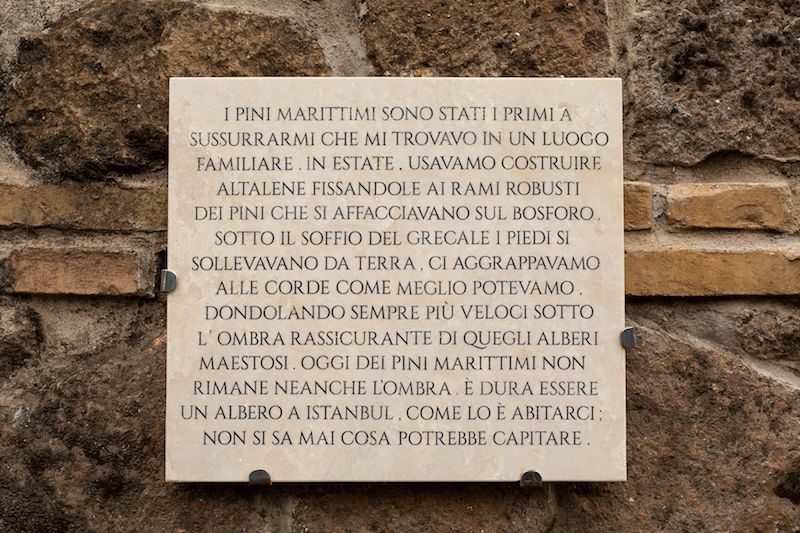 In the backroom of the main hall, we find a collection of 10 photographs taken by Esra Ersen. Ersen’s work is based on an empirical and analytical study of social situations through culture, myths, and ritual. In her research-based practice, Ersen treats questions of history and historical perspectives and their reverberations over time in everyday culture, education, and cultural symbols. National identities and the mechanisms of their construction are recurring motifs in Ersen’s work, in which she seeks to bridge the gap between oral tradition and collective memory. As a result of her residency at Villa Massimo, Ersen has also created 10 literary miniatures inscribed on plaques made of travertine–a material that is typical in Rome. The title of the work, ‘Le Due Rome’ is a reference to the book ‘Le due Rome: Confronto tra Roma e Costantinopoli’ by the Byzantine scholar Manuel Chrysoloras. In the same vein as Chrysoloras, whose book was about the cultural roots of Rome and Constantinople, Ersen acknowledges the still evident but forgotten shared roots between Rome and Istanbul. The plaques that are installed throughout the park, then, have become carriers of messages from the past in a public place. 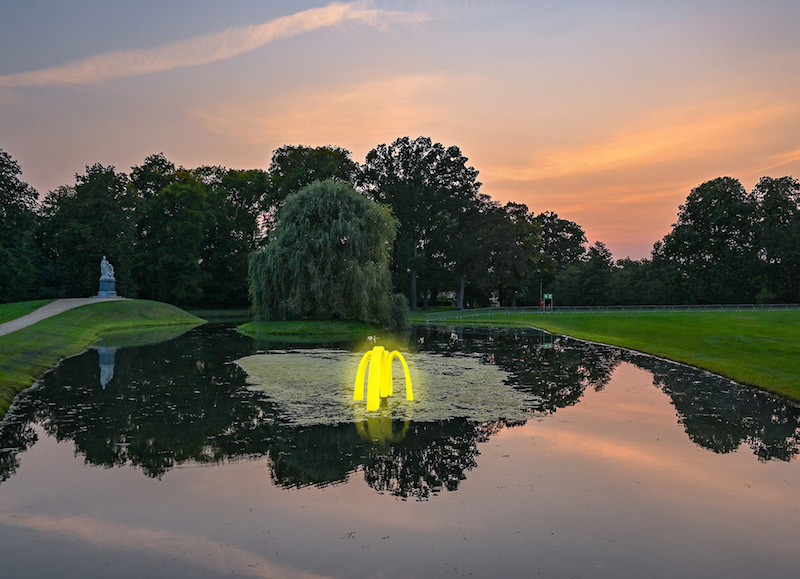 ‘The Fountain’ is another piece viewable in the outdoor exhibition. A yellow acrylic sculpture illuminated by LEDs, installed in the middle of the pond, ‘The Fountain’ is a collaboration of the artistic duo FAMED. Sebastian M.Kretzschmar and Jan Thomaneck have collaborated together under the name FAMED since 2003. In their interdisciplinary practice, they question issues of identity and productivity in various spatio-temporal contexts. Designed site-specifically for Schloss Neuhardenberg, the sculpture represents a copy of the well-known McDonald’s logo–with its yellow color and arches that cross at a 90-degree angle. A humorous reference to the consumerist nature of our modern society, ‘The Fountain’ is in stark contrast with the landscape of the historic park. Yet, at the same time, the sculpture blends in perfectly with its surrounding, making up for the one thing the castle lacks, a fountain. 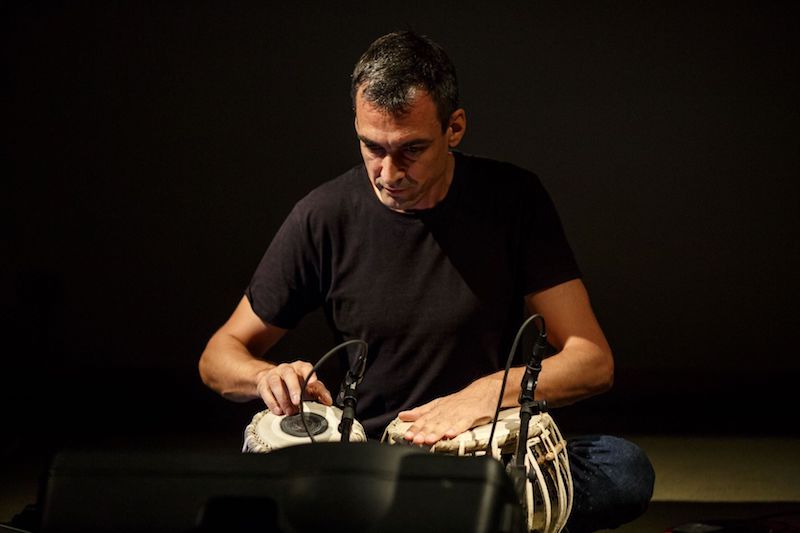 Bringing together a range of different artistic mediums–from architecture and literature to music and visual arts–the presentation of Rome Prize winners at Schloss Neuhardenberg offers a rare chance to experience works of art in an unconventional setting. The unique set up of the space, with the historic castle as the focal point and the beautiful scenery of the landscape, provides a distinctive artistic experience of contemplation, relaxation, and enjoyment all at once.

In addition to the visual program at Neuhardenberg, a concert by Villa Massimo resident Stefan Keller in collaboration with Ensemble Ascolta will take place on October 24th. The Swiss, Berlin-based composer is particularly concerned with the physicality of music. In times of pandemic “disembodiment,” this appears as both a pressing issue and an almost utopian undertaking. You can book your tickets for the upcoming performance at the link below.