When I met Monica Bonvicini on the occasion of ‘Stagecage’—her new show at Galerie Krinzinger in Vienna—what struck me as surprising was her loud, contagious, liberating laugh. The reason why I point this out is that this laugh, in the form of humor, is key to her work. An irony that accompanies the slogans, the chains, the neon lights, the mirrors, even the aluminum models of family homes—the new works on show. Her laugh punctuated our conversation, shaking and emphasizing some passages like an orchestra cymbal. In this exhibition, Bonvicini addresses topics that are at the same time historical and contemporary: identity, power, labor. These themes have animated her work over the past two decades. Her installations have raised questions about how architecture and the environment forge our relationship with society, being inevitably linked to memory and forms of power, both in the public and private realm. The Italian, Berlin-based artist has been recently fascinated by the function and aesthetics of Renaissance architectural models. In this show, she presents the act of building a house as an exercise that eviscerates the many significances of facades and building materials. While furnishing these houses with new elements that push her creative horizon towards a new awareness of identity, she opens up a new vision of contemporary feminism that, for her, could be capable of welcoming a new idea of feminine anger. 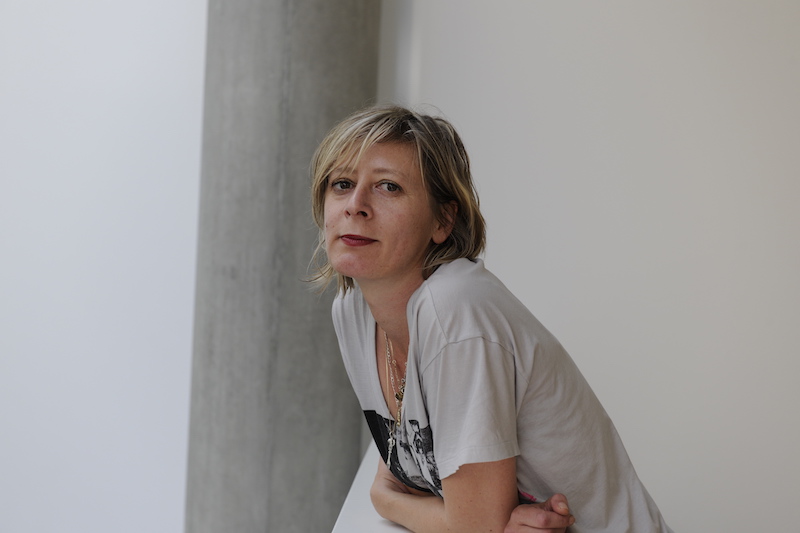 Lucia Longhi: Let’s start with the title of the exhibition: ‘Stagecage.’ The aluminum structures that make up these model houses can be seen as load-bearing structures, and at the same time as everything that remains after a destruction, thus revealing their fragility. How were these houses born?

Monica Bonvicini: ‘Stagecage’ is a play on words originated from the exhibition ‘StageCraft’ that took place at Columbia University. It is also the title of these new sculptures, aluminum models of family houses. What has interested me for a long time is the fact that architecture always has, in some way, gendered connotations. The show at Columbia was a well-orchestrated collection of models and photographs. However, it sparked the awareness in me that architecture almost fails to find a new way of presenting itself, a mode which is different, for example, from the architectural models of the Renaissance. That exhibition at Columbia had to do with studies on tectonic architecture, an idea that I really like: architects are able to combine elements that have nothing to do with each other, but together they form a fixed system. So I started thinking about the house, which is a stable environment…in theory. 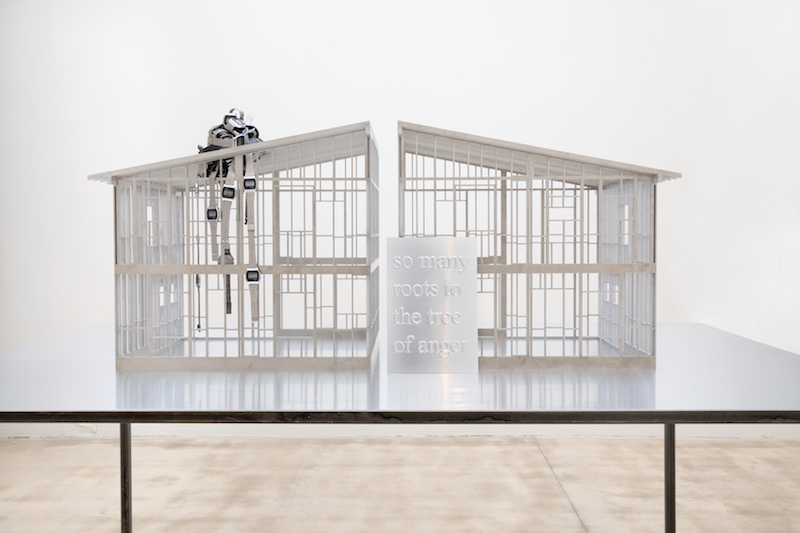 LL: This is a very interesting aspect of your work on houses: exposing the intimacy and the fragility of the home environment. The house, a place of protection, sometimes becomes a stage for violence, or a space that symbolizes disorders, both on a social and environmental level. The way you present the house often as though it is a victim. Could you tell us how these themes emerge in the new works, and if your typical cutting irony comes to touch them, too. I see a desire to deconstruct the architecture of institutions and private spaces in a way that is also humorous…

MB: These two stagecages (inspired by Italian family houses) address the aesthetics of the architecture display, its symbolism, so to speak. I placed them upside down, on a mirror, and the aluminum structures are not glued (it’s just those black leather belts that hold everything together, a strong band, exerting its strength to keep the elements together). But, since what interests me is not only the model, but also the topic of identity, I have added new elements: there is a cluster of clocks that cover the house like parasites. The clock is an object that marks the times of domestic life: the morning alarm, the family lunch…the domestic rituals. Home is the place where the first sense of identity is formed. Home is always about memory, too. Those watches, unlike belts, aren’t men’s watches. They are replicas of Casio, which have become very fashionable lately, perhaps precisely because it is a model that in the 90s had become a symbol of the bisexual community. 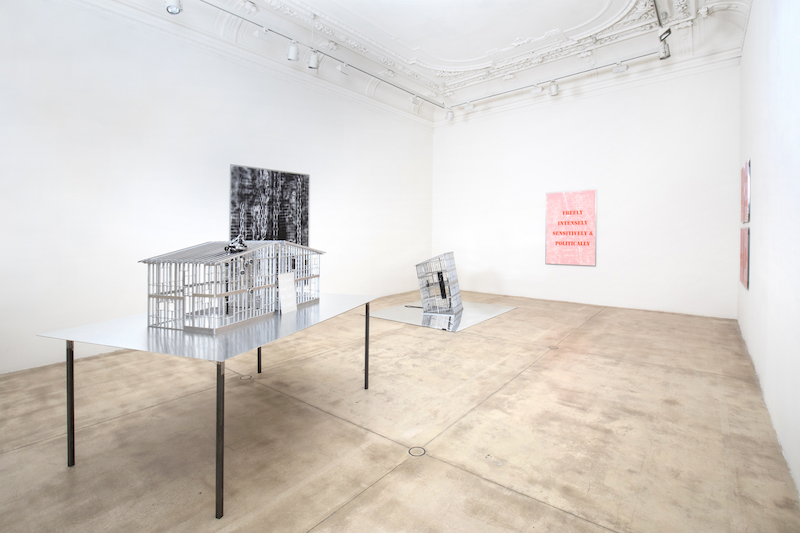 LL: This aspect is interesting: you have gone from the black leather belt, a symbol of masculinity, to an object that is neutral…

MB: Yes. And there is another interesting element: the original Casio watches have been pointed out, as they were used by terrorists as a mechanism to set off bombs. I see them as objects loaded with suspense.

LL: In this sense, there is a connection with destruction, a topic you have faced in the past, addressed both at capitalistic society, and architectures hit by natural disasters. I’m thinking, for example, of the ‘Hurricanes and Other Catastrophes’ series (started in 2008) on the theme of the Capitalocene. What does staging architectural models mean for you and how did they allow you to unfold new reflections on this topic?

MB: There is a connection with the topic of destruction that takes place through the material. The watches are made of aluminum, American houses are also made of aluminum structures. It is a material widely used in the construction industry, something I noticed when I took photographs in Los Angeles and, later, New Orleans. Renaissance models fascinate me because they are carefully crafted, they are so perfect that they become artworks themselves. The quote from Filarete (1450 AD) that I chose to open the exhibition reflects very well a contemporary vision of the formation of identity, and of sexuality, in relation to architecture and the domestic environment. Filarete compares the architect to a mother who gives birth to a child—the building. When this birth is accomplished—that is, when he has made the model—he then shows it to the father. So the architect does not create a complete building, but rather its model. 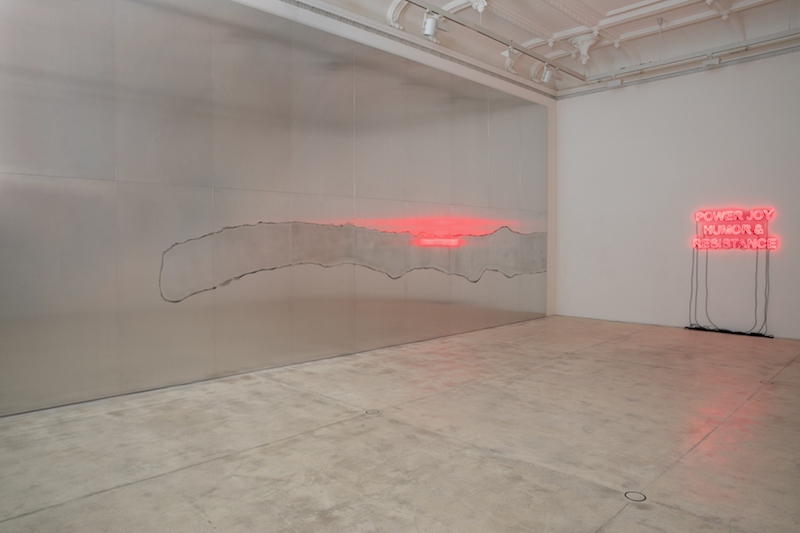 LL: Keeping with these topics, the work in the second room, ‘Be your mirror,’ is a teared aluminum wall. Is it a site-specific installation?

MB: I conceived this work for ‘Lover’s material,’ an exhibition at the Kunsthalle in Bielefeld (2020-21), which is the only Philip Johnson museum in Europe. It is an interesting museum from an architectural point of view: the walls are frames created specifically for hanging pictures. I tried to cover them, and this sort of scratch was done with a polishing machine. Many design objects are polished by hand, an activity that requires a lot of physical work. In the end, the aluminum looks almost silver. I am interested in these two aspects: the perfect, sparkling final surface, and the industrial material that is handcrafted. I am interested in the idea of ​​caring and maintenance, the fact that the effort that allows that perfection remains hidden and does not allow a glimpse of all the labor behind it. This is typical in contemporary artistic production, they are activities that remain behind the scenes, nobody sees them.

LL: Taking care of the facade, understood as an architectural element but also as an interface with society, is once again linked to the houses: their reassuring facades often hide fatigue, conflicts, violence. In this sense, ‘Be Your Mirror’ could be understood as a new reflection on the relationship between architecture and society?

MB: The title of this work comes from “I’ll be your mirror’ by The Velvet Underground and Nico. In this exhibition, I put many musical quotes, such as in the new Murano glass sculptures ‘Come on Home’ (2021)—the title comes from the lyrics of Aretha Franklin’s song ‘Chain of Fools,’ in which love delusion finds an apparent assurance in the father’s voice saying ‘come on home.’ Pain, anger and discontent within the private space is a topic that I am exploring through different angles and materials… 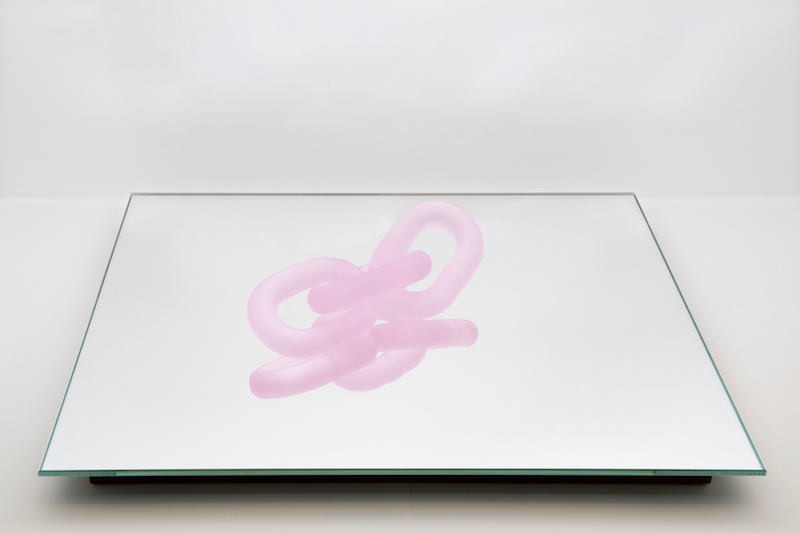 LL: I would love to expand on the feeling of anger, which is key in your production. You are among the artists who brought out the topic of female anger with greater strength, effectiveness and even irony. What is your relationship with contemporary feminism and the way it is explored today? Do you think there is a risk that historical feminism is transformed into a pure trend?

MB: In this show, there are many quotes from ‘Rage Becomes Her: The Power of Women’s Anger’ by Soraya Chemali, a book that is a mixture of personal anecdotes and historical research, as well as a strong political approach. Her proposition is to reverse the image of the angry woman, and stress the fact that even today female anger is an emotion that should be kept hidden (otherwise you will be labelled as hysterical). I’m interested in trying to turn anger into a positive force, a political force. I really think feminism has been the biggest revolution of the last 150 years. When I started making artworks like ‘Wallfuckin’ (1995-96), they asked me if I was a feminist. It seemed obvious to me that we are all feminists! For me, one of the older generation, some contemporary works sometimes look just dredged up from the past. But I have the impression that for many young people feminine anger is something really important. When I asked my students, ten years ago, to think about feminist issues, they replied that they had not had “such problems”, as if to explore those issues it was necessary to have had a personal history of gender abuse. Now, they don’t say it anymore. On the institutional level, something has changed too. For example, at the recently reopened Neue Nationalgalerie in Berlin, it’s notable that there are more than 20 female artists. Of course, sometimes these are also strategic marketing moves. Anyway, I feel that today feminism is more rooted and also expands to other social issues and areas. In art there are trends, of course, but I hope that something substantial will remain. 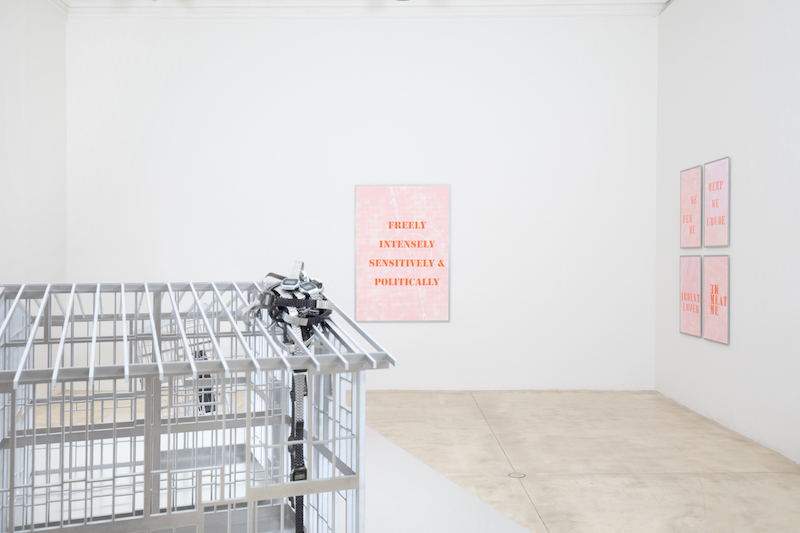