Berliner Festspiele is hosting a 10-day long exhibition in the International Congress Centre (ICC) architectural landmark from October 7th to 17th under the title ‘The Sun Machine Is Coming Down.’ The project, which is named after a lyric from David Bowie’s song ‘Memory of a Free Festival’ (1969), will feature new and adapted art from performance, circus, music, film and installation created by an array of Berlin-based and international artists. 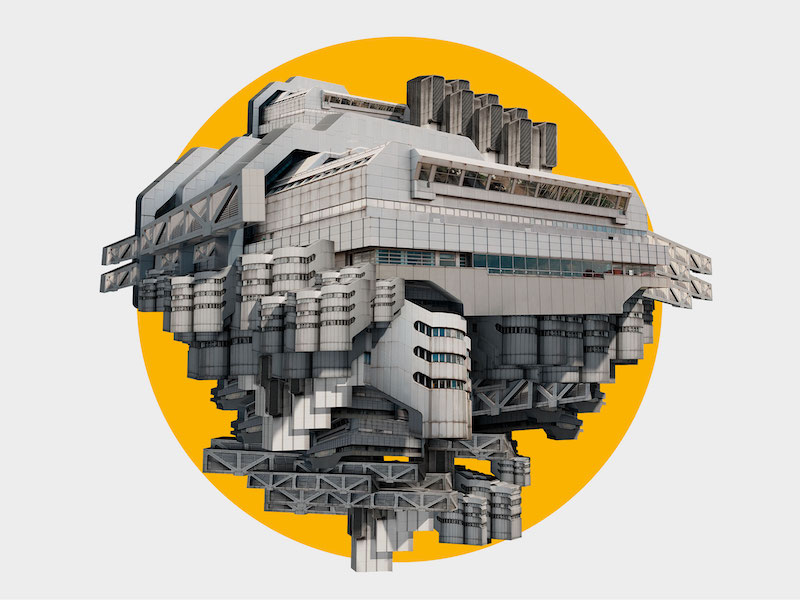 ‘The Sun Machine Is Coming Down’ Motif // Copyright Berliner Festspiele

At the time of its inception in the 1970s, the ICC was considered to be state of the art, a think-tank for ideas, innovation and change, the presence of which West-Berlin hoped would cement its authority and reputation as an economically sound and innovative destination. Today, however, the colossal venue dominates as a deteriorating and eerie imposition from the past. Its mammoth size coupled with its distinctive, framework-like construction likens it to a free-standing spaceship, untouched, floating through time. While the space was used to shelter refugees from 2015–17, the venue has not hosted an official event since 2014, marking this exhibition as a renaissance of sorts. The project’s initiator, Thomas Obenender, hopes to breathe life into this dormant giant by honoring the building’s original purpose as a vessel for futuristic exploration.

Visitors are presented with a choice of two different options for navigating their way through the vast exhibition, over a 3.5 hour period. They can choose to see the permanent events, installations and screening programs that are presented in loops, or they can visit formats that are repeated, such as performances, film presentations and concerts, with starting times.

The largest hall features a collection screenings of famous German socialite and art collector, Julia Stoschek. These works were all created between 1978 and 2018 and feature voices such as Berlin-based British contemporary artist Ed Atkins and Chinese multimedia artist Cao Fei. All displayed creators are united by their faith in the power of resistance that is found in simple poetic gestures.

A separate cinema hall celebrates the 70th anniversary of Berliner Festspiele. The exhibition, created by Thilo Fischer and David von Stein, gives insight into the institution’s beginnings as well as its long-standing roster of festivals, exhibitions and individual events. Fischer and von Stein restored more than five hours of images and sound from public and private archives to assemble three separate video works, which weave together the colored history of the festspiele through news, discourse and art.

In another space, visitors can expect a continuous program of music curated by Martin Hossbach, featuring international and Berlin-based musicians such as Alexis Taylor, Nazanin Noori, The White Screen, Rosaceae and Tegel Media. This complete program of concerts and lecture-performances will allow visitors to examine how the ICC architecture interacts acoustically.

Located on the upper and lower foyers are various impressive visual arts and acoustic installations from an array of renowned artists. While these works are time-based, they are also permanently accessible and feature the expressions of Susanne Kennedy & Markus Selg, Richard Janssen, Floating University Berlin, Joulia Strauss and more.

Meanwhile, the middle foyer houses a permanent exhibition, which showcases dialogue between artificial and human intelligence. The space holds three kinetic busts created by Monira Al Qadiri and Raed Yassin, whose AI voices tell of the artists’ bizarre experiences and dreams during the coronavirus pandemic. Across from this installation is ‘Freeway Dance’ by Ayaka Nakama, which further explores the limbo between the eerie and the dreamlike. The four-hour dance solo transforms a living garden in the technoid environment of the ICC into a place of music, memories and encounters.

The ICC is also punctuated by art from the fields of dance and circus, the latter curated by contemporary circus icon, Wolfgang Hoffmann. This section of the program aims to reinterpret our ideas of specialty through counter gestures and clever performances. It features repetitive circus exercises and dancing, daring balancing acts that incorporate weights of several tonnes, and much more, all of which attempt to activate the vast space within the ICC.

The project’s title pays homage to cultural game-changer and former Berliner David Bowie, who was living in the city at the time of the building’s construction. Ten years after the building officially opened, Bowie released ‘Memory of a Free Festival,’ a song that paints a vivid picture of the promise, pleasure, and opportunity captured in a festival or celebration. Today, as we enter the 21st month of a global pandemic, society idolises the freedom and spirit that a festival sparks even more. Through its playful and experimental use of space, realities, and disciplines, ‘The Sun Machine is Coming Down’ attempts to capture the essence of this song and of a festival that, in recent times, seemed so far away.