You enter the room through the fireplace and look out into the distance towards a majestic alpine panorama. A solemn male chorus echoes through the space, recalling the Germanic myth of the Red Barbarossa. What seems to be a homely yet haunted interior unfolds before you, while you make your way around the first neo-classical Sitzgruppe, to encounter many more carefully placed throughout the room. On the table lies a single porcelain figure, an ashtray to be exact, moulded in the shape of an empty package of Marlboro Lights. For her latest installation, Henrike Naumann has recreated the layout of Hitler’s famous alpine residence, known as the Berghof in Obersalzburg, except the interior is scattered with her trademark postmodern furniture, and the alpine panorama is a heap of cupboards. 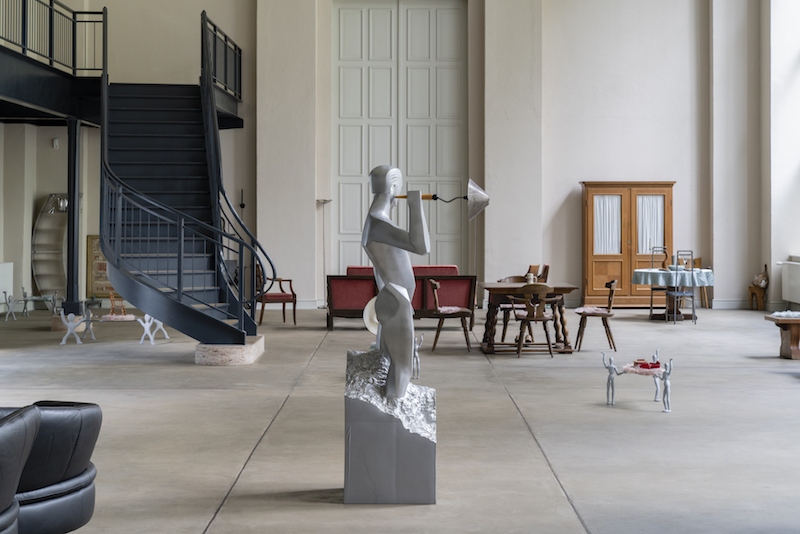 We’ve come to know Naumann’s installations as a deep-dive into the archeology of German extremism, viewed through the lens of its furniture. Often found as cheap, discarded items from the 1980s and 90s on sites like Ebay Kleinanzeigen, the furniture is used to recreate domestic settings, a stage yet always devoid of human action. Walking amongst the deserted scenes, we find ourselves asking: how do people live in these settings, and what does the furniture reveal about its inhabitants? In ‘Einstürzende Reichsbauten,’ Naumann has combined her Kleinanzeigen finds with objects from the archives of Haus der Kunst in Munich, where the installation was originally shown under the title ‘Ruinenwert.’ Originally known as Haus der Deutschen Kunst, and built in 1933-37 as a monumental structure for Nazi propaganda, the museums’s basement archives were teeming with Third Reich curios and original 1930s furniture and design.

At Kunsthaus Dahlem, these items become a parade of German propaganda throughout the 20th century: fascist aesthetics, neo-gothic revival and traditional folkish design are juxtaposed with what we could call the aesthetics of capitalism, mass produced po-mo furniture, which through accelerated trend cycles rapidly declined in popularity in the West and was sold cheaply to the former East after the fall of the Wall. Naumann, who was a child at the time, experienced this major political event as a sort of aesthetic shock: an explosion of alien new forms, colours and materials suddenly infiltrating peoples homes: what she calls an aesthetics of reunification. 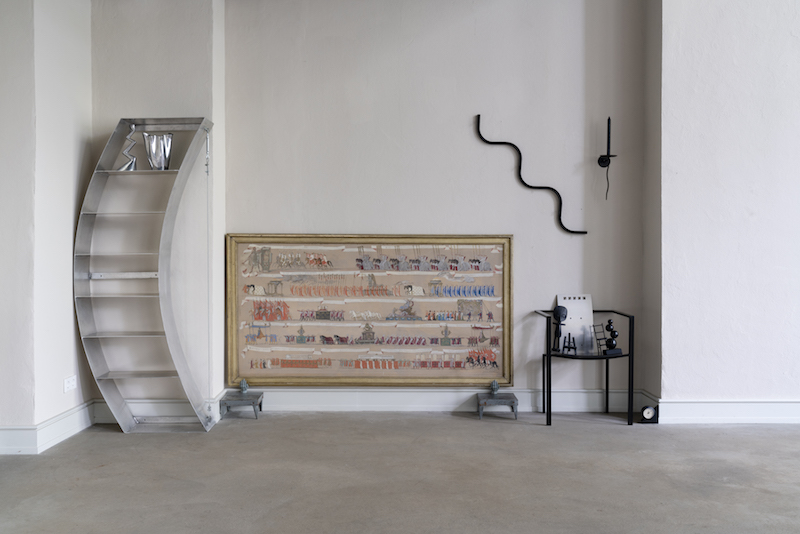 What we see, and what Naumann explores in her installations, is how deeply enmeshed political ideology is with the personal, and material with ideological. Fascism isn’t just psychotic temple buildings and public parades, it’s your great-grandparents living room, too, this seems to say. Even after decades of reparations, remnants of the Nazi past still live on, and, in concerning cases, have even become reignited with the rise of the ultra right wing in Germany. How do we deal with the cultural heritage of the Third Reich, and to what extent are we still living amongst its legacy? Naumann’s installations—with their uncomfortable familiarity—bring these questions into the centre of German domesticity.

In terms of reparation, post-war Germany paid high sums of money and land towards Israel and the winning Allies, yet this hardly made up for the suffering of millions, let alone benefited those who were personally affected. How would one go about repairing irreversible damage? Or is that even the question we should be asking ourselves? 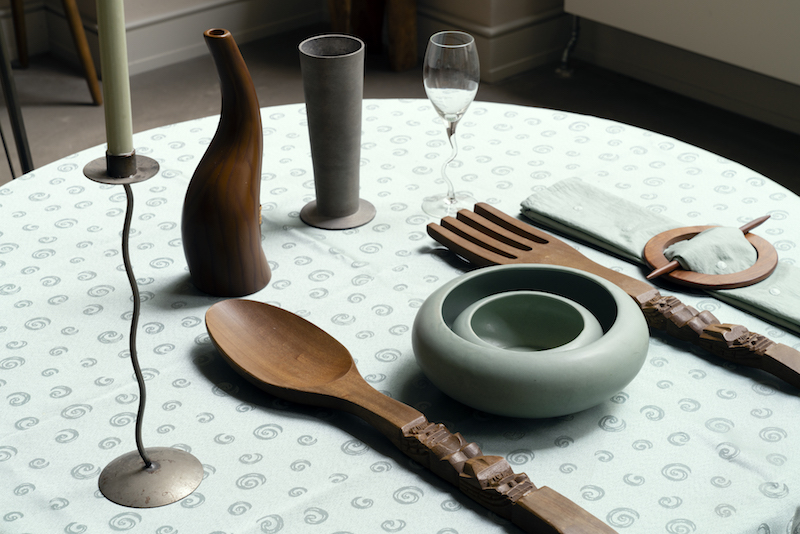 When I think of repair, I think of super-glue that sits firmly between pieces of a once-shattered plate, restoring it back to its original shape and function. Often Germany’s relationship to its past has been similar: Dresden, Münster or other cities that were completely bombed now stand once again in fake-old facades, fake-old towns, re-built but exactly as they were before. But what if the thing that is to be repaired was faulty to begin with? Thinking of the Berliner Stadtschloss, as the latest example of ignorant anachronism, exemplifies most clearly that going back to how things were potentially creates more pain than relieving it. Naumann, sensitive to the impossibility of historical reparation, or at least its failure up until now, discards the glue, and instead decides to tear open whatever wounds have been diligently covered, peering deep into them before deciding what to do with the scars.

What further complicates the issue of repair is that much of what was built during the Third Reich was meant to last forever. Albert Speer’s famous ‘Theory of Ruin Value,’ which Naumann referred to in the title of her latest show at Haus der Kunst München, states that buildings must be constructed so that their future ruins should symbolise a great empire, coherent with ideas of the thousand year Reich, yet also in practical terms means that the sheer colossalness of natural stone, which for Speer did the job, and the expenditure of countless forced labourers, is still today too costly to dismantle and is therefore still in use. This also goes for the Kunsthaus Dahlem itself, housed in what was once the studio of National Socialist sculpture Arno Breker.

Paul Virillio speaks of an obsession with disappearance in his examinations of Third Reich bunker architecture: A yearning romanticism at the core of Nazi-ideology for both the distant past and future, embodied in its material output. What we find at Kunsthaus Dahlem is not, therefore, to be mistaken for a historical scene, nor a look into the Berghof, nor into Naumann’s childhood home in post-GDR Zwickau, but an inherently contemporary one, in which this ambiguous relationship of present to past is unraveled. 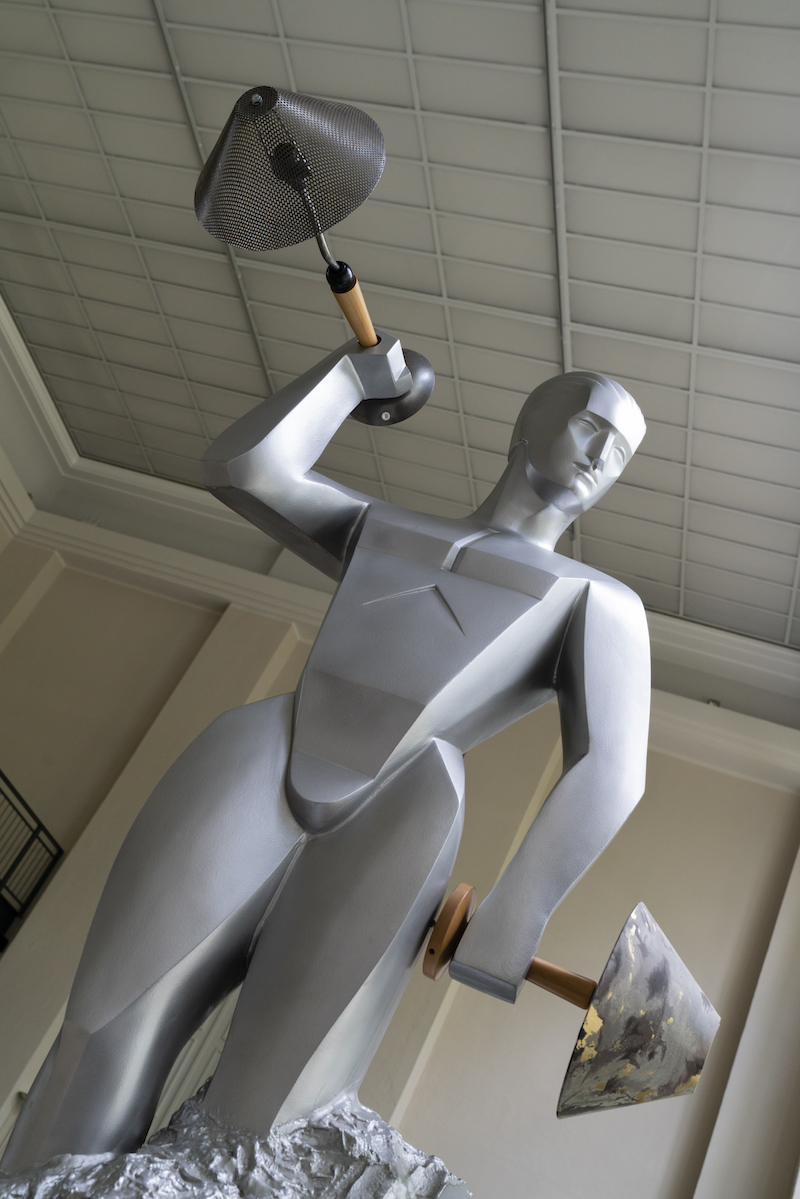 “The artefacts are tricking us into believing something,” says Naumann. “There is no normal furniture,” so under the now suspicious watch of the observer, distinctions of innocent and evil, fascist or modernist, begin to dissolve. Pink-plush cushions are laid out on traditional wooden stools reminiscent of a Bavarian Bierstube, Nazi memorabilia and ethnographic-kitsch placed in painted plywood vitrines. There is a pseudo-Medieval painted panel that dates to 1942, depicting different groups going to war: Soldiers in full chain metal, holding lances and swastikas. A plastic silver torso, acquired by Naumann from a gym, grips two lampshades where dumbbells once were, evoking the idealised masculinity in both Nazi and Soviet sculpture. Formally trained as a set-designer, Naumann describes how she had always gravitated more towards the documentary form, but liked to seek out its fictional potential. Working with ready-mades and archives seems to be a way to do just that, playing with ideas of what is real and what is fake. Fiction, as the lie that tells the truth.

On the way out, one object specifically catches my eye. A doormat sized rug, hung decoratively above a velvet lilac sofa and a table draped with matching lilac tablecloth depicts an overly-colourful Kandinsky reproduction. The artist held onto the conviction that art must remain free from politics, but was himself highly politicised. First damned as “degenerate art” by the Nazis, later taking on an iconic status within Communist-affiliated Russian avant-garde, it now lies diminished in the domestic commodity-form. Often sinister, yet at times comical, in ‘Einstürzende Reichsbauten’ we encounter ideology and symbolism as variables. Naumann highlights how, in an age where trend-cycles exhaust themselves before they fully kick off, and endless riffing of retro-aesthetics has become the fake frenzy of the new, all sense of linear time is scrambled, to the extent that history itself has become commodified, entering the domestic as memorabilia—from the Kandinsky rug to Kanzler-babushka dolls—everything becomes flattened onto a single vast plane of the past.