The exhibition ‘The Future of Cities. Not For Granted,’ presented at the Halle 14 Zentrum für zeitgenössische Kunst in Leipzig’s Spinnerei gallery, assembles a survey of practices, which hybridize art, architecture, political activism, community organizing and aid work, and look critically both forward and backward in time at the production of urban space. The exhibition statement begins by referencing the assertion that “although the limits to growth have long been exceeded, the world and urban populations continue to grow rapidly.” The original referent is, of course, the 1972 book ‘The Limits to Growth,’ produced by the Club of Rome, a United Nations-sponsored think tank made up of scientists, government administrators, and industrial managers. The Club warned of catastrophic, Malthusian consequences, within only a few years, if the world political-economy was not placed under the management of corporate technocrats, such as themselves, with a mandate to control environmental pollution, and population growth in the post-colonial, “third world” positioned precariously between opposing powers of the Cold War. 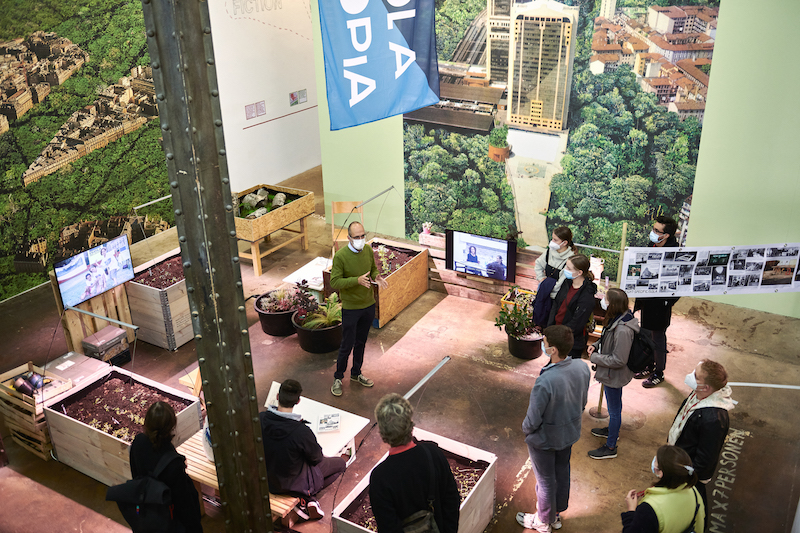 ‘The Future of Cities,’ opening // Photo by Walther Le Kon

There has recently been a revival of interest in growth, its limits, and the possibilities of “degrowth,” now reframed in relation to climate change, migration and globalization. Its invocation here, however, represents yet another layer of recontextualization, given Leipzig’s history of having been a commercial and manufacturing center, where, as part of the DDR, reconstruction after the Second World War unfolded in very different terms than in western Europe. In the 1980s, Leipzig emerged as a center for activism opposing Cold War militarism and calling for democratic reforms, and eventually reunification with the West. After reunification, however, Leipzig experienced the “shrinking cities” phenomena that became endemic in the former east and this trend has only recently begun to be reversed, in a large part due to a focus on the kind of culture-driven development of which Halle14 is an example.

The projects in the exhibition appear as similar translations across time and space. One of the more emphatically future-facing is ‘Seven Stories of Mellonopolis’ by Studio Forage, which originally appeared in the 2020 Shenzhen Bi-City Biennale of Architecture/Urbanism. The seven stories are “smart, stupid schemes for a stupid, smart city” that imagine tactics for hacking, subverting, and evading surveillance developed by inhabitants of an imaginary—but clearly recognizable as a mythologized Shenzhen—“smart city,” controlled by an artificial intelligence. The stories include t-shirt graphics for defeating facial recognition software, and pidgins painted by bird lovers to escape culling by robot exterminators. These riff on currently circulating tropes, but Studio Forage also joins other practices in the exhibition by invoking themes from critiques of modernism from the 1970s and 80s such as context-sensitive “placemaking;” the power, or sense of place; and techniques of community design figured in opposition to “top down” planning. In Mellonopolis, however, the planning comes not from big government but from the black box algorithms, peddled by the purveyors “smart cities.” This inverts the conventional narrative of well-intentioned utopian projects collapsing into chaotic dystopias of unintended consequences, by suggesting that dystopias can be very consciously constructed. With Leipzig as an idyllic counter-model, good cities are often ad hoc, provisional and stumbled-into. 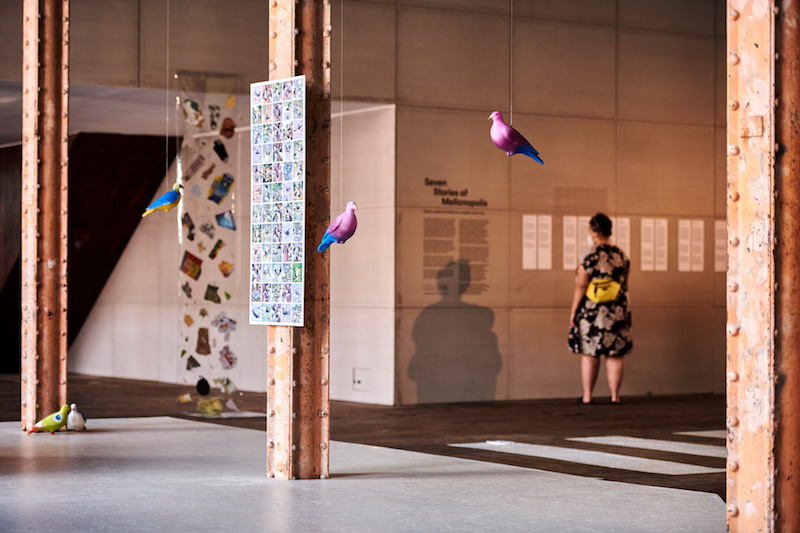 Other parts of the exhibition stay closer to the nitty-gritty politics, and historical hauntings, of Europe. Margit Czenkie and Christoph Schäfer of Hamburg-based group Park Fiction contribute an installation of documentary information, reminiscent of Group Material or Joseph Kosuth, documenting their work in organizing struggles around public space, and the right to the city. From Milan, the Isola Arts Center presents their project that began in a social center, in what they describe as an occupied factory, and has developed into a collection of “fight specific” practices resisting gentrification and collaborating with neighborhood activist groups. Isola traces its history to the strikes, factory occupations, and Leftist militancy of the 1970s in Italy, which, after the defeat and suppression of the radical left, was reframed as “social,” rather than “political” movements. Shifting the venue for the relitigation of these issues to Leipzig, however, changes the stakes and meanings of the terms significantly, such that the past, as well as the future, appears “not for granted.” 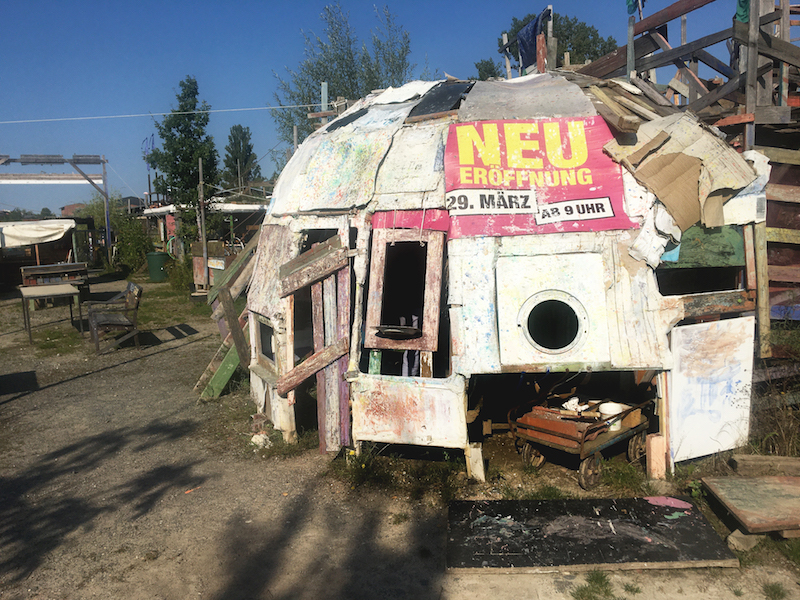 The part of ‘The Future of Cities. Not For Granted’ that engages most directly with the specificities of place in Leipzig is ‘Playing with the Rules,’ taking place at the Bauspielplatz Kunst Kammer, which appears as the exhibition’s education program. In keeping with the nested structure of the exhibition, the Kunst Kammer is itself an arts institution with a gallery space, an archive and calendar of public programs. All of this, however, takes place in a rough-and-ready, semi-dome-shaped shack that is part of the Bauspielplatz Wild West, adventure playground, where it was built, and is now curated by an amorphous band of local children, under the watchful eye, but light touch of its directors Marc Herbst, Luise Wonneberger and Chico Togni. The adventure playground format was invented in occupied Denmark during the Second World War. Afterwards, it was taken up, especially in the United Kingdom, as the basis for a movement that sought to use free-form and constructive play to repair, reconstruct, and re-inhabit, both the physical spaces destroyed and made vacant by the war and the similarly disrupted and damaged social forms that went with them. Initiated in the 1990s, the Bauspielplatz Wild West applies a form from one period of reconstruction to another, or perhaps points out that these periods are not discreet and that the process of reconstruction is ongoing, continuous, and perpetual. 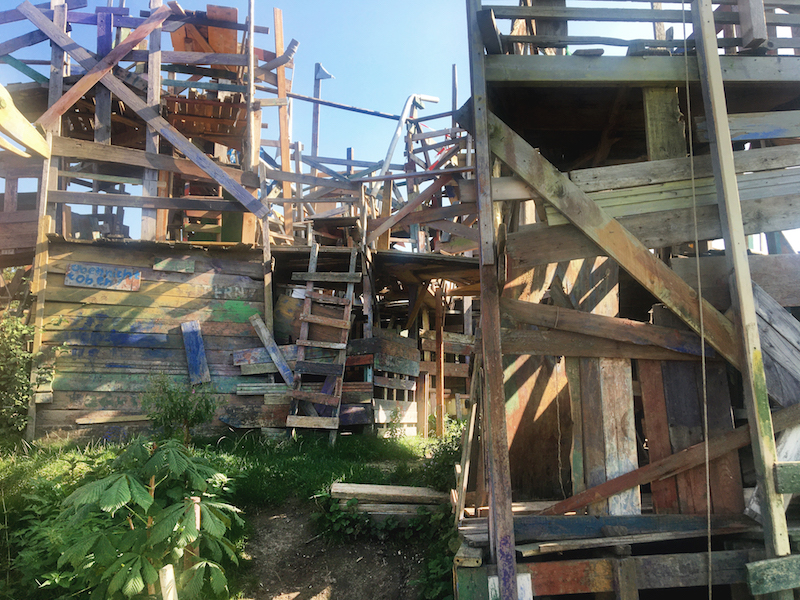 The Bauspielplatz Kunst Kammer presents in microcosm the question posed by the entire exhibition: what does it mean to make art within and as part of this always unfinished process of reconstruction? If the future of the cities is not to be taken for granted, it also should not be assumed as set or certain, or anything that will be arrived at—if there is ever any arrival at all—without careful, conscious action. There is much work, but also much play, to be done.