We are greeted by Aleksandra Domanović at the entrance to her studio in Kreuzberg. The building’s facade is made up of yellow glass bricks, allowing the autumnal sun to cast a warm glow on its interior. She guides us up the stairs and past the neighboring studios before welcoming us into her own space, which consists of two small, separate rooms dotted with fragments of her past works. Aleksandra lives and works in Berlin and explains that she’s had this studio space for ten years. Her recent commission by Audemars Piguet Contemporary, ‘Becoming Another,’ gave us the perfect excuse to meet with her and hear a bit more about the process behind her works. 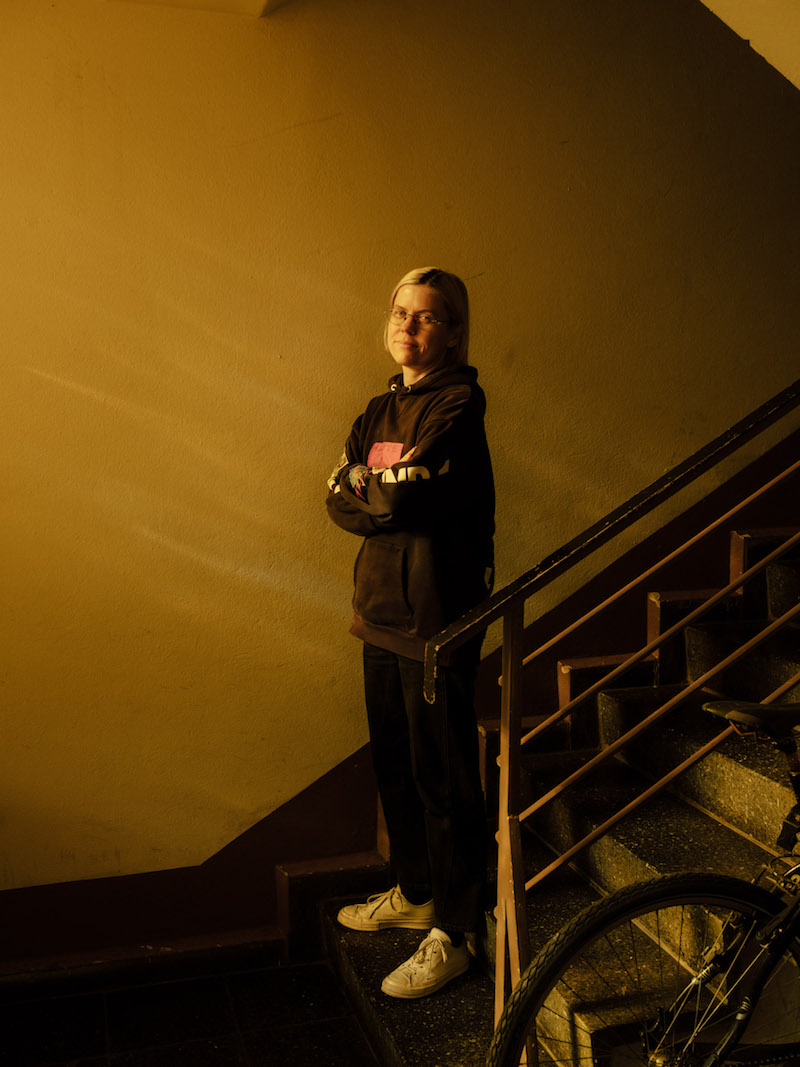 Aleksandra admits that this isn’t always her preferred place of work. “I have a confession,” she laughs. “I rarely work here. I live alone, so I mostly work from my living room. I come in here about 10 or 20 percent of the time.” This approach to creating is also reflected in her atypical entry into the professional art world. Domanović started her career as a graphic designer and, in 2007, began a curated art blog with Georg Schnitzer, Christoph Priglinger and Oliver Laric called vvork. The site would feature an associated flow of images, each one chosen by one of the creators in response to the image before it. The artwork was largely found online, a practice that was still somewhat unconventional at the time, pre-Tumblr. “I remember when we started, we were like, ‘What if we run out of artists’ websites to post?’ because not many artists had websites at the time, it was kind of uncool or whatever, so we were genuinely concerned that we might actually post everything, like all of the art online.” The concept of a newsfeed-type blog was relatively untapped at the time, particularly in the art world. This articulation of something human—a stream of consciousness—and something web-based—like this blog—was in some ways a forerunner for what would become Domanović’s signature style today. 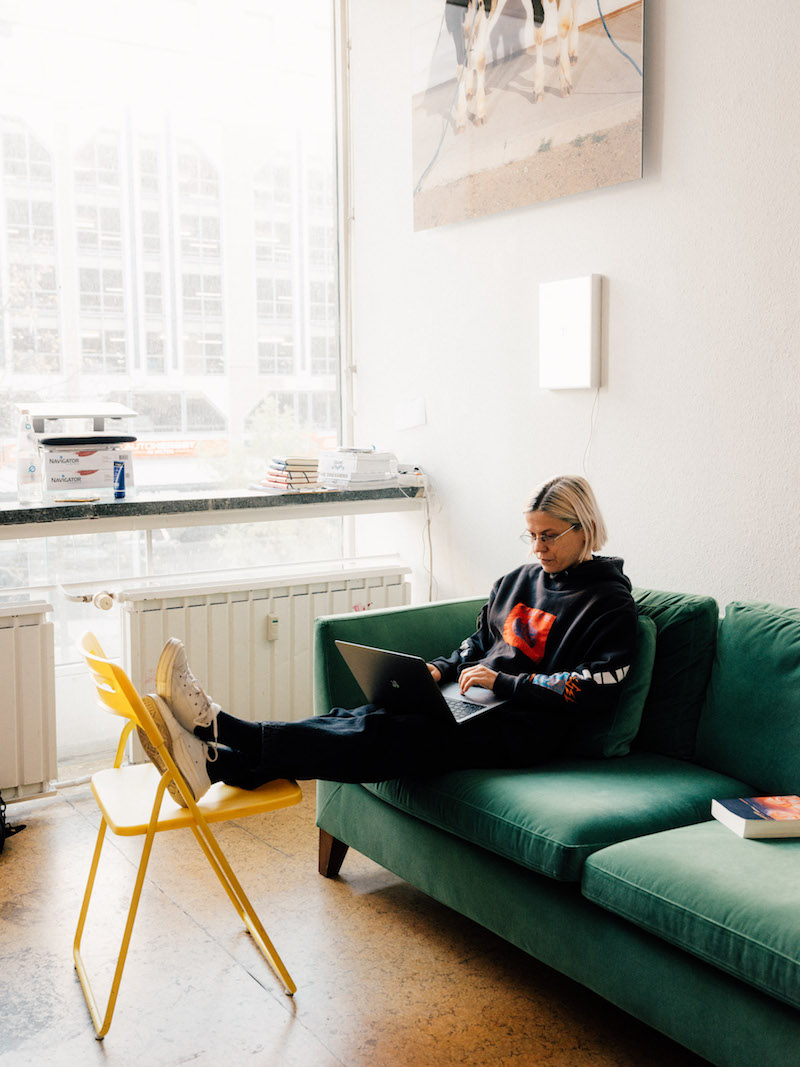 Behind Aleksandra is a tall bookshelf stacked with books, notebooks and various objects connected to her work. Leaning against the shelf in one section, we spot some prints of Germans holidaying in Yugoslavia. She picks them up, shuffles through them and explains that many FKK (Freikörperkultur) Germans used to go on vacation to Yugoslavia and frequent the nudist beaches that her family would also visit. “A lot of my childhood memories are of these nudist beaches where I would see foreigners, hear their languages, and admire their nice hotels.” Domanović was born in former Yugoslavia, about a decade before the republic disintegrated into its separate states. The examination of her country’s fracture and its impact on the identities and lives of former Yugoslavians serves as a frequent starting point in her work. 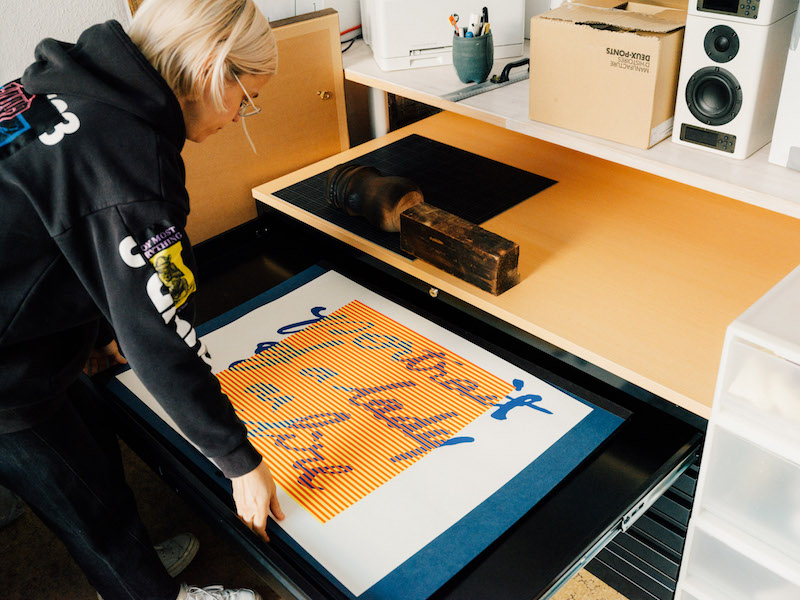 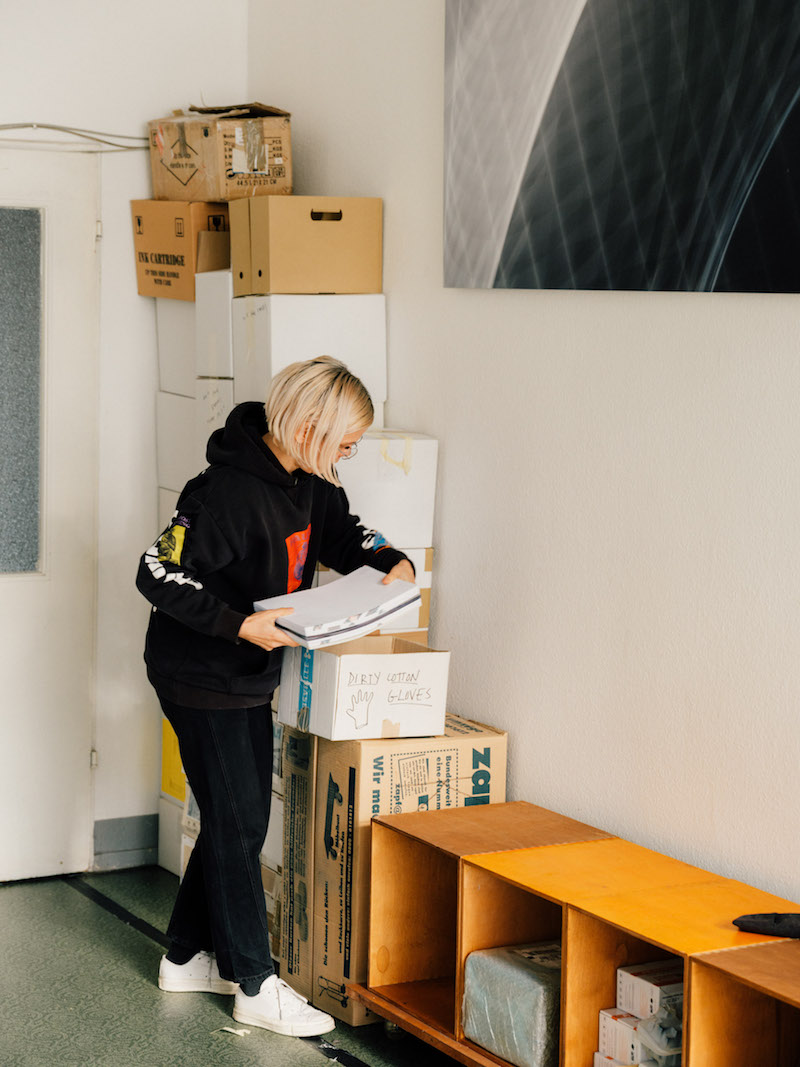 Next to the bookshelf is a tower of unused Canon printers reminiscent of Domanović’s paper stack works, the most notable of which is related to her project titled ‘From yu to me’. This project was a video homage to Yugoslavia’s now-defunct web domain .yu. It honored the two female academics, Borka Jerman Blažič and Mirjana Tasić, who administered the domain. The paper stack element, titled ‘Grobari,’ was made deliberately shorter than Domanović’s other paper stack works, so that people could print it on their own, as it was freely downloadable online. Nevertheless, it consisted of thousands of standard office sheets of paper, which were vertically stacked to build sculptural objects. Each was printed using borderless printing, which soaks up the inks onto the paper’s edges. The images depicted flumes of smoke, which were set off by an organized group of extremist football fans, known as the Grobari. These kinds of conflicts on the football field were a barometer of what would later happen with the dissolution of the Yugoslavian state. Domanović designed these paper stack sculptures to commemorate her country that had lost the last of its identity: its virtual one. The PDF files that comprise these pieces can be transferred digitally on the occasion of an exhibition.

The ability to recreate these statues anywhere somehow immortalizes the legacy of the Yugoslavian domain, allowing its identity to hum despite it no longer existing. However, the towers of printers stacked in the studio also emphasize the sheer amount of ink, printers and patience that would be required to accurately complete such a task. Aleksandra explains that this steeple of printers barely scratches the surface of her collection. “I have much more than that. When I’m working on an exhibition I could have over ten printers working at once. It’s usually like that for a month and then when that’s done, I might not make another paper stack for another year,” she tells us. “In that time, everything dries up or the printing company changes something and I’m forced to throw them away, unfortunately.” 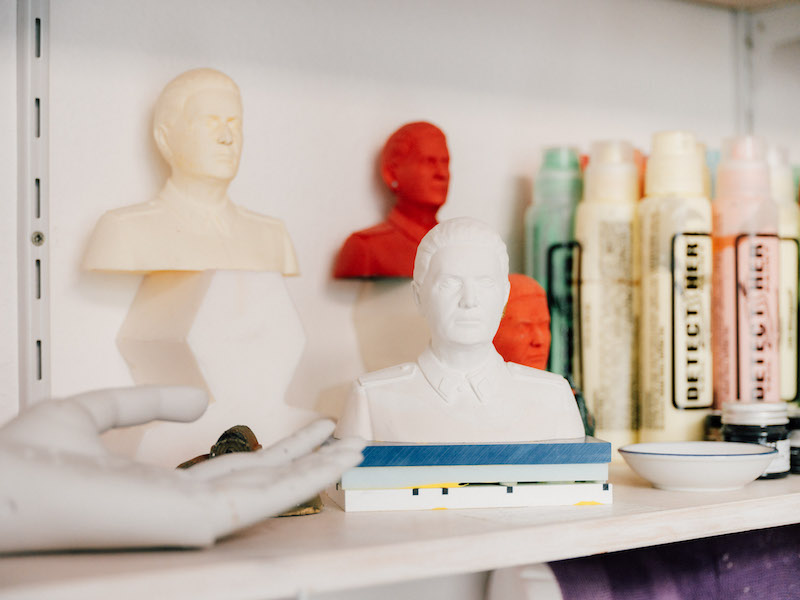 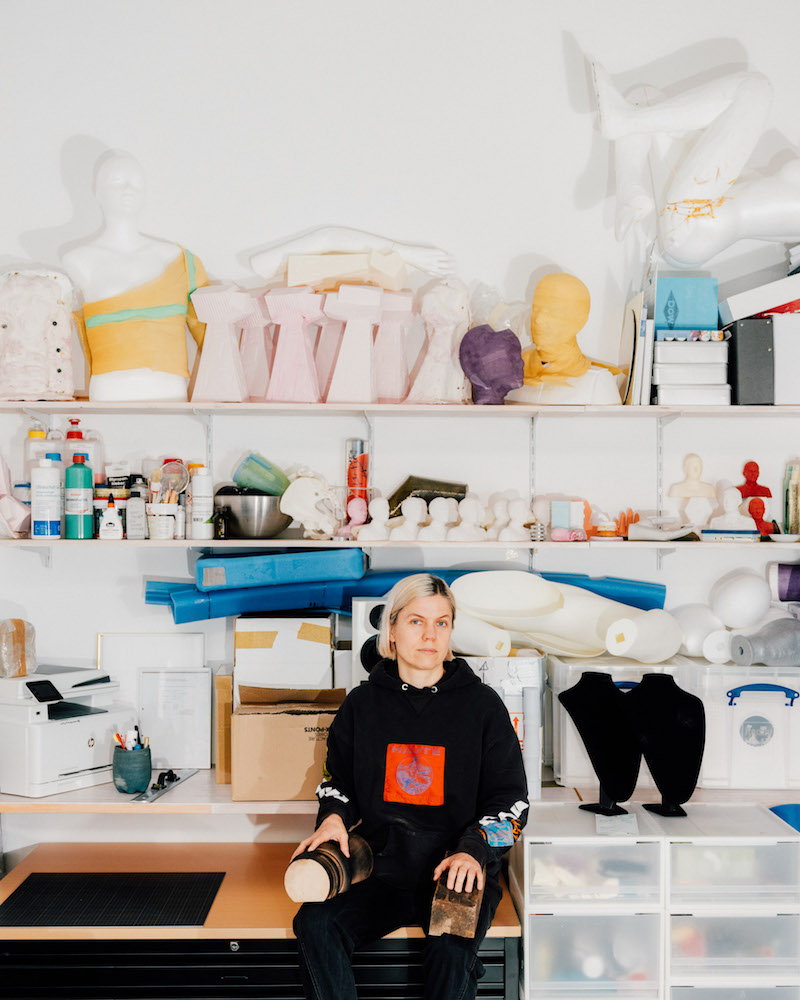 Aleksandra’s opinion on perception—or, more specifically, the power we have as individuals to rewire past perceptions and influence future ones—is a theme she frequently plays with in her work. The wall to our left is lined with white shelves heaped with tools, paints and tokens. A portion of the shelves is entirely stacked with feminized busts of Tito, Yugoslavia’s former strongman president. Aleksandra explains that she was one of the last generations to have a portrait of Tito front and center in each of her classrooms. As a child, she thought one of her teachers bore an uncanny resemblance to the photo of the Yugoslav statesman and this likeness was the inspiration for this work. “You know, it was probably a little bit sexist of me because it was just because she had short hair and accentuated cheekbones, which other female teachers didn’t have at the time,” she explains. “However, because she was always standing under this photograph of Tito, I couldn’t help but think they resembled each other.” Domanović created the busts by reworking and softening the amalgamation of numerous photos of Tito alongside a 3D modeler. Since its conception, she has revisited her queered Tito many times and dressed it with different decorations, such as gold earrings and coins. One notable variation of Domanović’s Tito was titled ‘Tito (Gravity)’ and saw the bust wearing a space helmet. This modification was created in 2020 to hone in on the marginalized representation of women within science fiction films, once again nodding purposefully to the valuable female contribution within the industry.

Domanović’s most recent work ‘Becoming Another’ also highlights a female professional contribution. However, this time, the woman in question is a lot closer to home: her mother. The site-specific artwork was presented in the former printing house of Der Tagesspiegel, opening during Gallery Weekend Berlin. The large-scale installation was once again threaded by the theme of perception and revolved around the concept of things, in particular ultrasound technology, becoming something else when we see them. 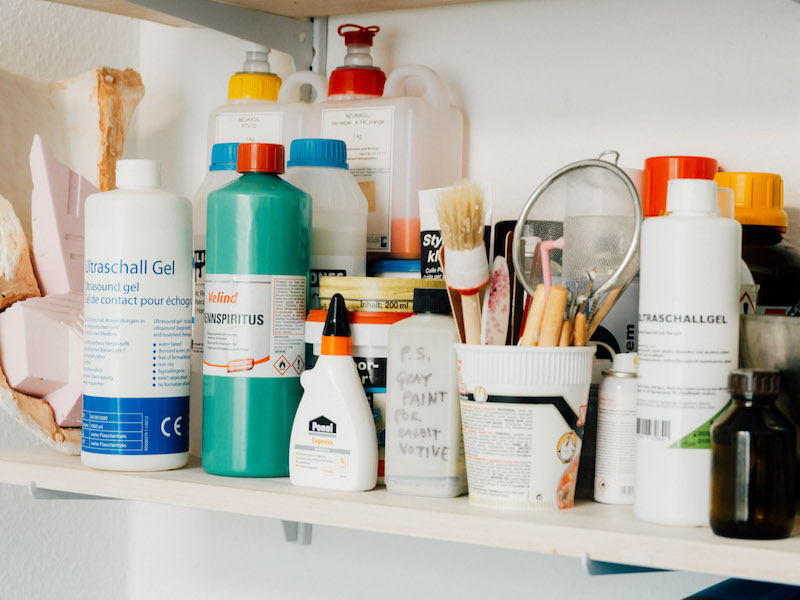 Aleksandra’s mother ran her own private radiology practice, a commercial liberty that was new and relatively controversial in Slovenia at the time, as their healthcare system had been strictly public up until that point. She explains that for a brief period, her mother ran the practice from their family home. This meant that ultrasound machines and the images produced by them pillared her childhood. “She didn’t have her own office yet so patients would come and she would conduct their examinations from a room at our house. At the time this felt normal, but looking back, so much was changing around me, it became such a formative time in my life.”

The focal point of ‘Becoming Another’ was a large wood and LED installation. It consisted of large hanging wood-turned poles with LED fans attached at either end, weighing a total of 900 kilos. The fans at the end of the poles were spun at such a speed that the individual images of the turning fans became unprocessable and instead, an illusion of continuity was shown. This optical illusion is called the persistence of vision and provided a backdrop to show various holograms, one of which was the name and address of Aleksandra’s mother’s practice. Additionally, Domanović showed two prints that used the Bezold effect—an optical illusion suggesting that a color may appear different depending on its relation to adjacent colors. In her studio, she explains that this commission provided by Audemars Piguet Contemporary allowed her to take her own ongoing research and forms that she had developed on a small scale and merge them on a large stage. This also allowed her to create a holistic spatial experience that investigated perception from a new angle or perspective itself. 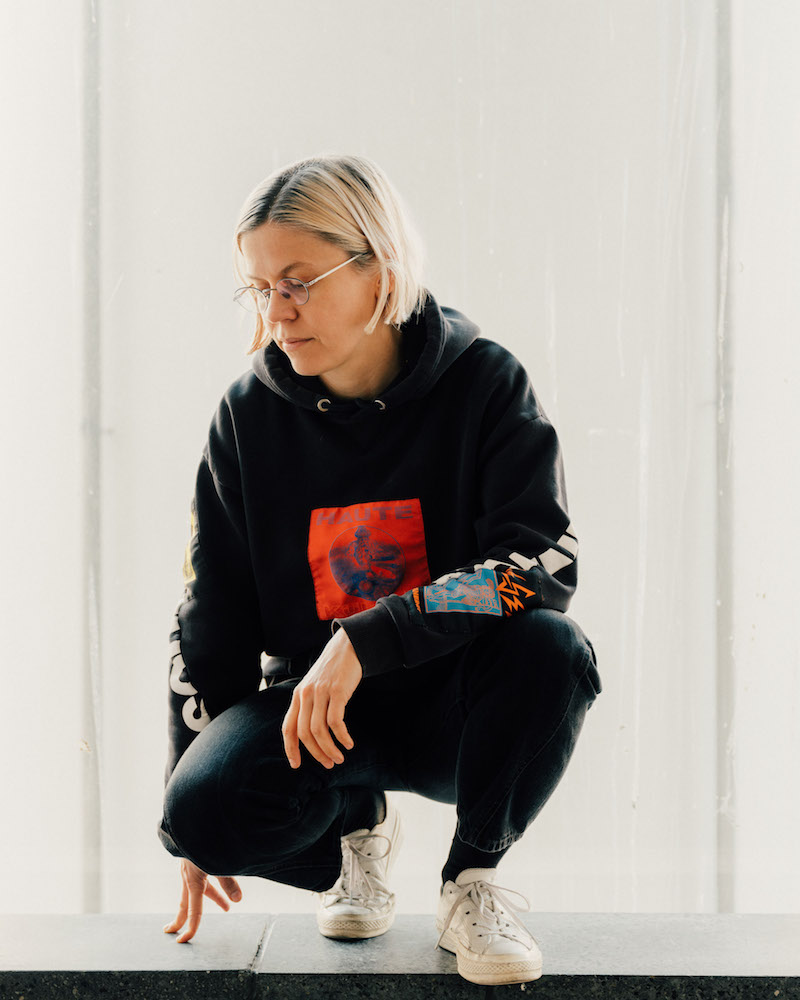 In the middle of describing the exhibition, Aleksandra turns and picks a book up from her shelf by feminist quantum physicist Karen Barad. As she fans through the book, she explains that the copy was given to her by a friend and that the fifth chapter was of particular interest to her. It considered perception theories by using the example of ultrasound technology. She then reels off the conflicting teachings of physicists Bohr and Heisenberg, so that we’re up to speed. “While Heisenberg said that you can never neutrally observe something, Bohr thought that there was nothing there before the observation and so, by observing, we are creating the object of observation.” Then she pinpoints the direct relationship this teaching triggered when she created ‘Becoming Another’: “In the same way that this observation through ultrasound technology creates the subjects and vice versa, this whole project was about things becoming something else and making and unmaking boundaries. There is nothing there before there is an interaction. This really inspired me.”

Domanović’s unique knack for intertwining her own biography with contemporary technology has made her a singular artist, whose research-heavy practice need not be contained in any one studio space. Her digital roots rig her perspective at a unique angle, one that is gender-conscious, tech-savvy and intellectually informed.