Sonya Lindfors and working group’s ‘camouflage’ (2021) contains props, gestures, dialogues and citations that make us laugh, but not always comfortably. Problematising the gaze, it taunts audiences with imagery that turns on culturally-engrained tropes, prompting me to ask: who is humouring whom?

Sonya Lindfors is a Cameroonian-Finnish choreographer and an educator. Berlin art audiences might know her as part of the Miracle Workers Collective, a transdisciplinary, “anational” community who formed for the Finnish Pavilion at the Venice Biennale in 2019, curated by Bonaventure Soh Bejeng Ndikung. In Finland, Lindfors is a significant force. She has amassed accolades and is something of a role model for a generation of artists, activists and intellectuals grappling with issues of race, gender and multiculturalism. Following on from the lauded ‘COSMIC LATTE’ (2018), ‘camouflage’ has languished in a Covid-induced limbo for a year. So it’s no surprise to find a sold out crowd gathered for its much-anticipated premiere at the theatre doors of Stoa, East Helsinki’s notable community cultural centre. 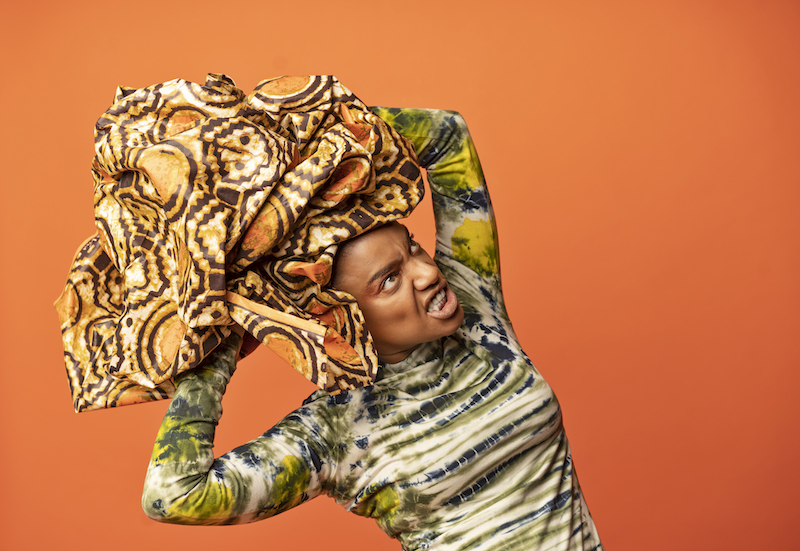 I’m last in the queue, so I sit up on the tiered seating that I suppose indicates the front of stage. Seats closer to the action, arranged around all sides of the large square “dance mat” are already full. I am intrigued by two stacks of speakers strapped into trolleys that are positioned below. Hiding behind them are the performers Johanna Karlberg and Elisa Tuovila. Costumed by Sanna Levo in ruffled shirts, knee pads and sneakers, they lie on their stomachs, poised to spring into action like ball persons at a tennis match. The thick stripes of colour that accentuate their eyebrows and cheeks could be the same anti-reflective pigments that sports players use.

Solange’s ‘Almeda’ (2019) sets the tone. A song that is simultaneously an affirmation, a mantra and a self-identifying anthem for many, it sounds a weighty prelude: “Black faith still can’t be washed away, not even in that Florida Water.”
As the song fades a giant “African” mask creeps in from the far end of the stage. Face forward, it appears to be made of rubber and I wonder who it depicts—what is its reference? Moving cautiously, the mask takes some minutes to make it to the front. My neighbour is fidgeting and I too am anxious to see who is behind it. The mask lowers flat against the floor and then a pair of brown arms stretch out from underneath it, as if yawning upon waking, and then a head. When Eséte Sutinen twists around, I catch a glimpse of a harness, which marks the mask as a cocoon or shell. The petite performer crawls along the mat like an insect or hermit crab, struggles to disentangle herself and eventually writhes out from under it, drawing out the slow reveal. 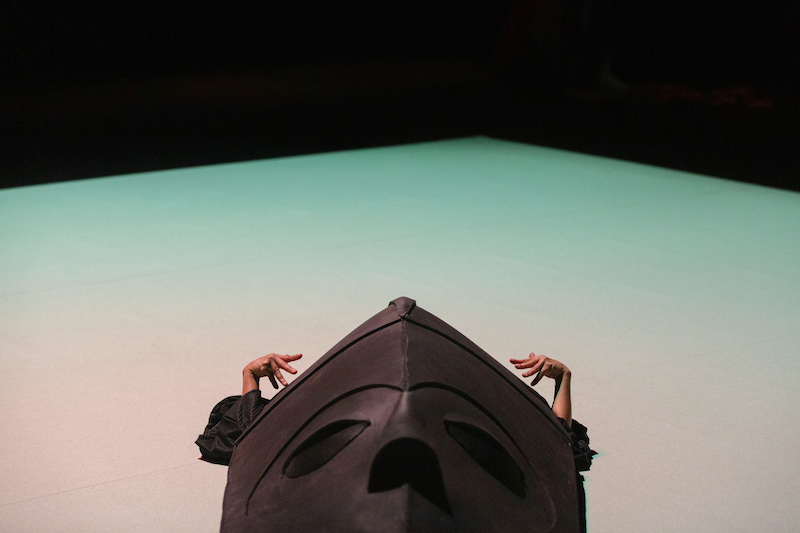 A following sequence has Julian Owusu and Johanna Karlberg moving in dialogue across the stage, their pacing brings to my mind a children’s game of prancing horses. The sound system emits a subdued rhythm comprised of static and hiss—“clicks ’n’ cuts”—just above the threshold of hearing (sound design by Jussi Matikainen and Tony Sikström). Owusu paraphrases a probing parent: “So you moved to Europe to dance? Four years to learn what? And you call that music?” We laugh and nod. We know how this conversation goes.

The performers morph into cats, backs arched as they hiss and stalk the stage as an agitated pair. Sutinen re-appears in the far corner and begins to skirt the perimeter of the stage with her arms spread wide. Clasping a small whip or flail, she flicks her eyes from side to side and I’m reminded of the late legendary Vogue icon Willi Ninja interviewed in Jennie Livingston’s documentary ‘Paris Is Burning’ (1990), describing how the dance form “takes from ancient Egyptian hieroglyphics.” We are at least 20 minutes into ‘camouflage’ and while we are aware of Lindfors pacing around in the shadows offstage, she has yet to appear fully lit within its frame. A soundtrack of polyrhythmic digital percussion takes over and donning a large pointed wide-brimmed hat she finally shows up as a witch; first as a silhouette, tripping light-footed over the feet of those seated in the front row before floating onto the central square. She carries a long whip and whenever she cracks it, the sound system booms and the lights dim dramatically. I can’t help but think of Oya, a deity from the Yoruba religion—Iansa in Candomblé—a warrior who commands storms, as Lindfors chases Sutinen around the mat. The strobe lights and thunder claps settle and the two performers arrive towards the back of the stage. Sitting in counsel, they exchange elongated vowel-sounds; pitch-corrected howls “like animatronic cats,” I later scribble in my notebook. Sounds that eventually become recognisable as the word “brown.” 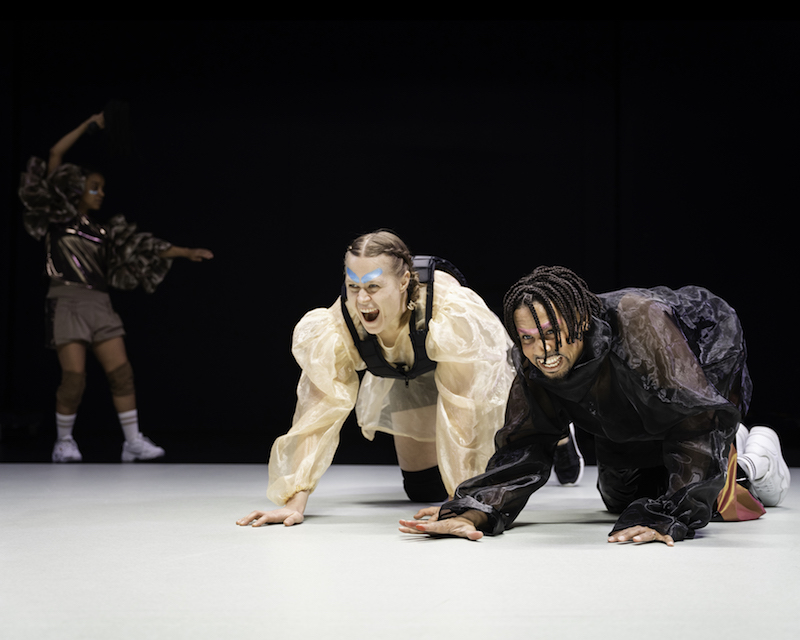 I must admit, I am often baffled by dance. I seek to write about it as an attempt to “read” it and find a language for it. As ‘camouflage’ unfolds, I play a game of spot-the-reference, that is until Lindfors breaks it down. Exchanging her black headgear for a pair of over-sized bright yellow spectacles (Steve Urkel?) she announces the following segment with a question: “What’s in the stage?” The centrepiece of ‘camouflage’ is a throwback to US talkback television, with the choreographer’s alter ego intimidating the audience to describe what they see or read into the work. No one dares speak and it is Karlberg and later Tuovila who appear in our seats, “volunteering” their answers to Lindfors’ sarcastic prompts. Ham acting as two “woke white women,” perhaps caricatures of themselves, Karlberg initially describes the stage as a symbol of patriarchy and supposes the performance is about race and identity politics. “Do you see a Jamaican stack or a techno sound system?” Lindfors interrogates Tuovila, who explains that what we project onto the stage is drawn from our own cultural baggage and personal experiences. Acknowledging her didactic tone, Lindfors challenges those who might question what drives her auto-fictional fantasy. Laughter ripples across the audience and I can’t tell if it is a sign of empathy or discomfort.

“And what else do you see?” Lindfors persists and only much later do I clock that she is pushing back against the kinds of attitudes she must often endure. bell hooks taught us to recognise internalised racism by attending to “black looks” and I understand Lindfors has produced a series of works concerned with blackness, in which it does not signify as it does today. Evoking Édouard Glissant’s “right to opacity”, ‘camouflage’ schools an alternative response when Lindfors hounds the two other “black” performers on stage:
“Can you–?”
“No.”
“Did you–?”
“No.”
“I just wanted to–?”
“No.”
“No.”
“No. No. No.” 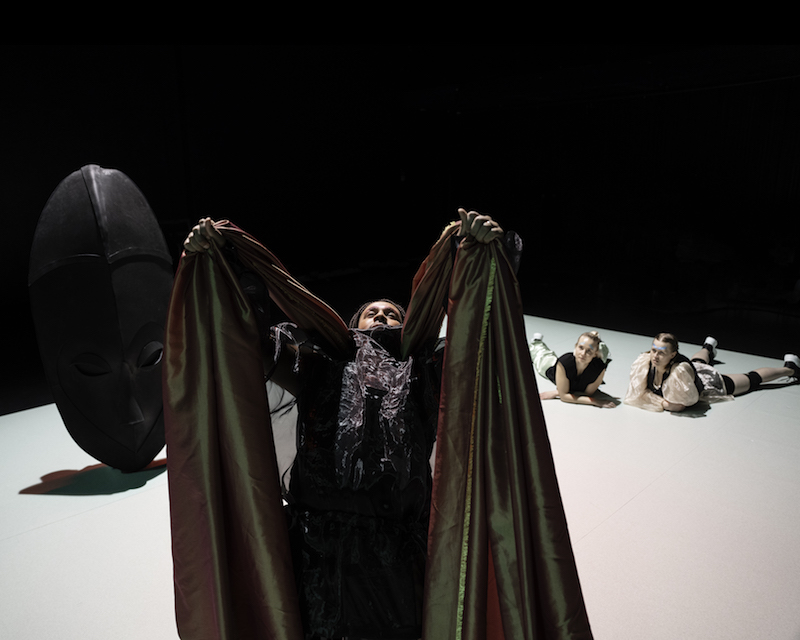 Their refusals morph into the refrain from the Jamaican singer Dawn Penn’s rocksteady hit, ‘You Don’t Love Me’ (1994). I wonder about refusal as a trope of black (non)performativity, perplexed that we are cycling through clichés while Steely and Clevie’s signature bass line, bouncing out loud from the mobile stacks, is needling my chest in a most pleasing way.

A long period of darkness follows and the air thickens with layered atmospheric audio, through which snatches of jazzy brass and bass are woven. I can make out the shapes of the speakers, twin spectral monoliths that I swear are moving closer towards me, but when the lights fade up I’m surprised to see the sound system positioned just as is was before. I question my senses: Did the music get louder? Is that why I thought its source was coming closer? Arguably, tricks of perception are the twists by which ‘camouflage’ turns. If whatever we think we are seeing is just what is going on in our minds, when the lights go out we are left to steep in our experience, perhaps catch a glimpse of what gives rise to our thoughts. As the press release asks: “But how do we recognize what we see?”

I’m amused by the shifts between dialogue and actual dancing, all over the stage. With few points of reference from dance history to call upon, all I can do in these sections is absorb the movements, attend to my body’s reactions and attempt to attune to those around me. A lot happens on and off the dance mat and ‘camouflage’ proceeds at an unhurried pace. As my mind wanders and I start to think about when it will wrap up, the dancers come to an abrupt halt, poised as a tableau. Of course, all is not what it seems, and the final flourish comes as lights flicker around them from all angles, animating the scene like an inverted zoetrope. The working group’s shadows spin around the stage like the hands of a clock or an erratic sundial in a sequence that goes on for much longer than I had anticipated, emphasising this trick-of-light as an after image. 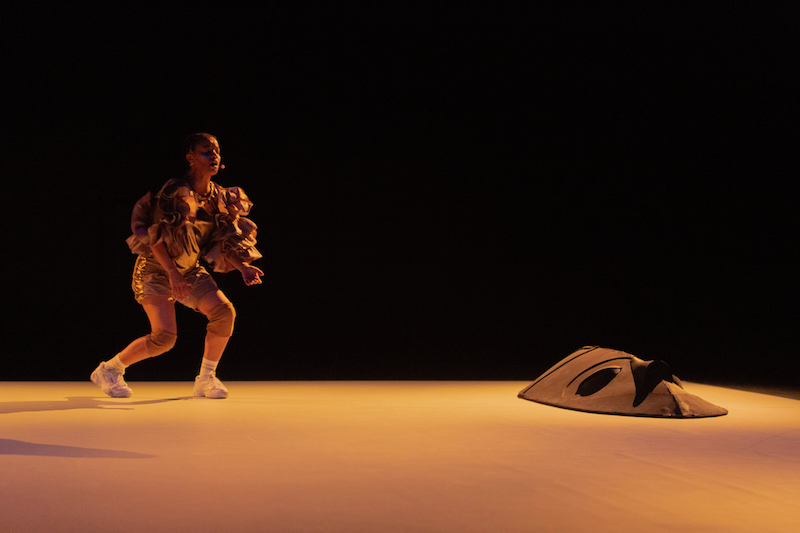 For me, ‘camouflage’ is a work about stereotypes and the difficulties of escaping them—because sometimes they are all we have. The late performance theorist José Esteban Muñoz’s offered “disidentification” as a way to discuss how racialised and queer people perform both to and against stereotypes; because sometimes it is simply safer to play to expectations than to challenge them. Similarly, ‘camouflage’ puts on a display of working through tropes that lets us see how they also work through us. It is a piece that meets our gaze and then sees through us. We are not transparent, but our acts of looking are made apparent and are manipulated. We are entertained, but ‘camouflage’ humours us; it plays to us—it plays us.

I return my thoughts to the opening sequence of a slow moving, over-sized rubber African mask and Sutinen’s struggle to escape from under it, even as it functions as a shield and shelter. A giant signifying novelty mask! Indeed, Lindfors’ provocations are not subtle. Jokes aside, I find the power of ‘camouflage’ arises from its confident use of stereotypes to break stereotypes, which in this era of widespread identitarianism is not to be scoffed at.