In his multi-faceted art practice, Mike Bourscheid tells stories that often have a humorous or absurdist bent. But from within his lovingly-crafted costumes and props, a deeper, more serious meaning takes shape. Bourscheid—who is usually based in Vancouver and maintains a studio space in Luxembourg—is currently in residence at Künstlerhaus Bethanien in Berlin. His recent exhibition as part of the residency, ‘Sunny Side Up and other sorrowful stories’ consisted of a “walk-in spatial installation” that made up the set of his forthcoming film ‘Agnes.’ We sat down over a cup of tea in his studio to talk about where Bourscheid’s sense of humor originates, his interest in games as a methodology for his performance works and how his costume and prop design serves to overturn traditional gender roles in his work. 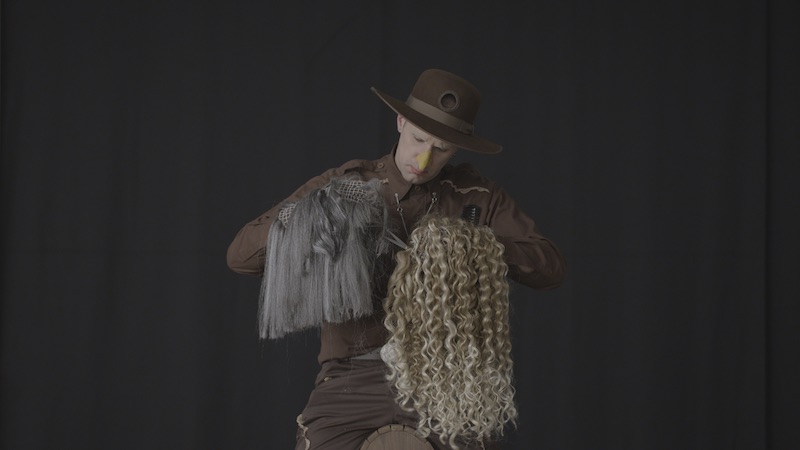 Alison Hugill: Why is humor important for your practice and to what degree does it factor in as a conscious decision in the development of the work?

Mike Bourscheid: When I started making more performative works, humor was never fully intentional but the works always turned out to be kind of funny and weird. I think a lot about where these things come from and I realized that, coming from Luxembourg and having lived in different countries and speaking multiple languages, each country has its own body language. I basically have three different personas in me and they come out when I speak each language. I started to notice how my gestures changed depending on the context. Also, the way I can go from serious to humorous very quickly.

When I’m speaking Luxembourgish, for example, I’m like a teenager. When I speak French, I use slang that is completely outdated and I am not even aware of it. Where I’m from, in the south of Luxembourg, there’s a big pub culture. People make very direct jokes, but they are often complaints. You don’t complain directly but you complain through a joke. That’s interesting for me: telling a story that provokes uncomfortable laughter, and then a deeper level of thought that comes after it. 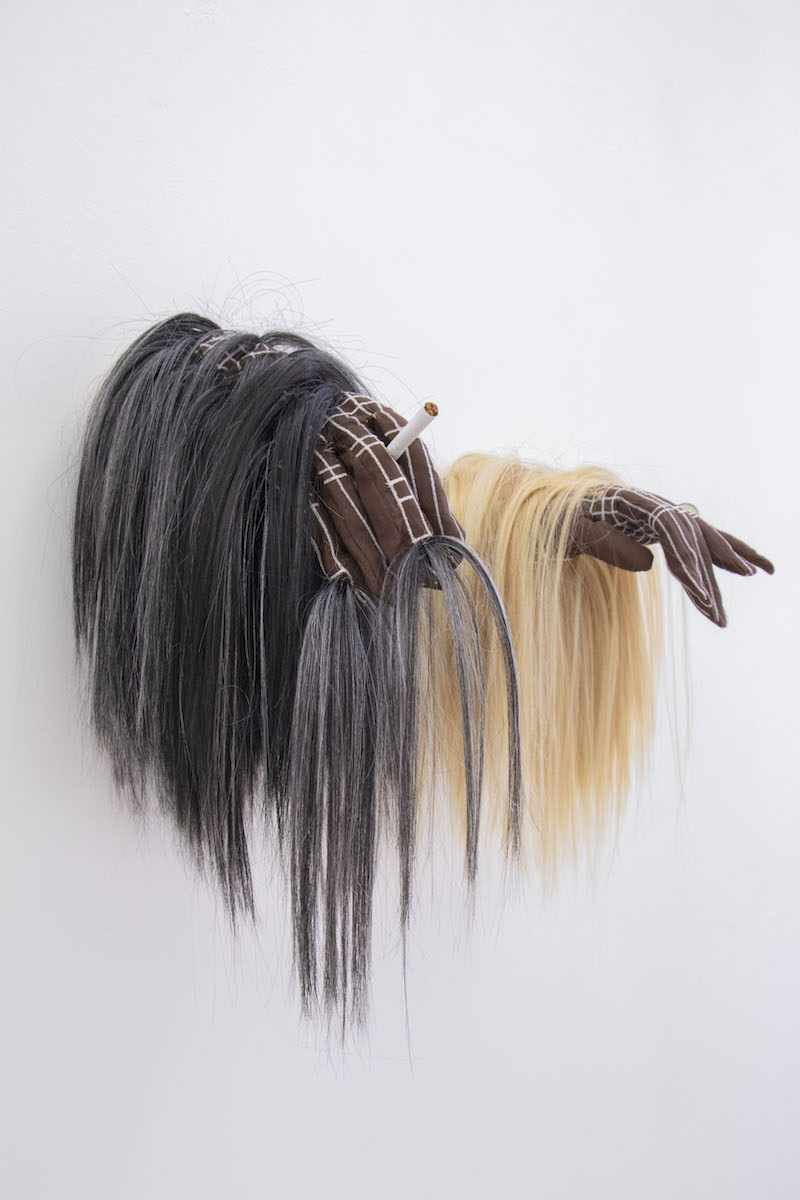 AH: You often put those deeper layers of meaning into the titles of your work, too. For example, ‘Parenthood and other questions’ consists of gloved hands, holding a cigarette and coin, and topped with your signature synthetic hair extensions. How does this disjuncture between the titles of your works and their contents create meaning for you?

MB: I make the works myself and I spend a lot of time with them. I am not only an artist but I am also a human who has a relationship, and other things that occupy my mind. These topics from my real life enter into my practice, too. I’m 37 and parenthood is a question on my mind. When I was making these two hands, which are cumbersome and hard to do things with, I realized that they are more work than anything else. Once you use them, you have to repair them immediately. The main occupation becomes taking care of them. Maybe this is a taste of parenthood.

At the same time, I was reading Sheila Heti’s ‘Motherhood,’ and in it her works—her books—become like her kids. I spent so much time putting this hair on this glove, and it’s a lot about care and attention. That’s how the title came about. A title can open up a gate, or another direction for the work. 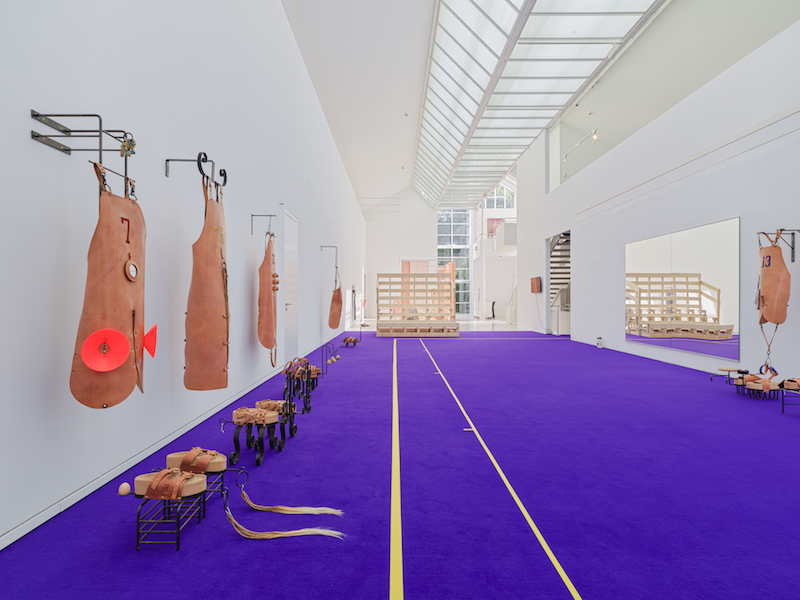 AH: In your recent works ‘Sunny Side Up’ and ‘Idealverein’ you bring in games as an aspect of the performance. How can the lightness of games help to access other, perhaps more serious, concerns that you address in your work?

MB: Games often come with props. I like to make props for things, so this was a natural progression. For my piece ‘Idealverein,’ it started with six pairs of shoes. You can walk in all of them differently. Some are harder to walk in than others. So, to play the same game in these different shoes, it becomes super unfair off the bat. It became a dance performance, where each character had a different task and a different gift. One could play the flute, one had the task of cutting the sausages that were hanging from another’s shoes, etc.

An “Ideal Verein” is an old German term for a non-profit. It has the connotation of a union or a soccer club, for example. It’s an assembly of people, an ideal union. So it made sense in the work, because they are all simultaneously for each other, and against each other. It’s a microcosm of a small society. 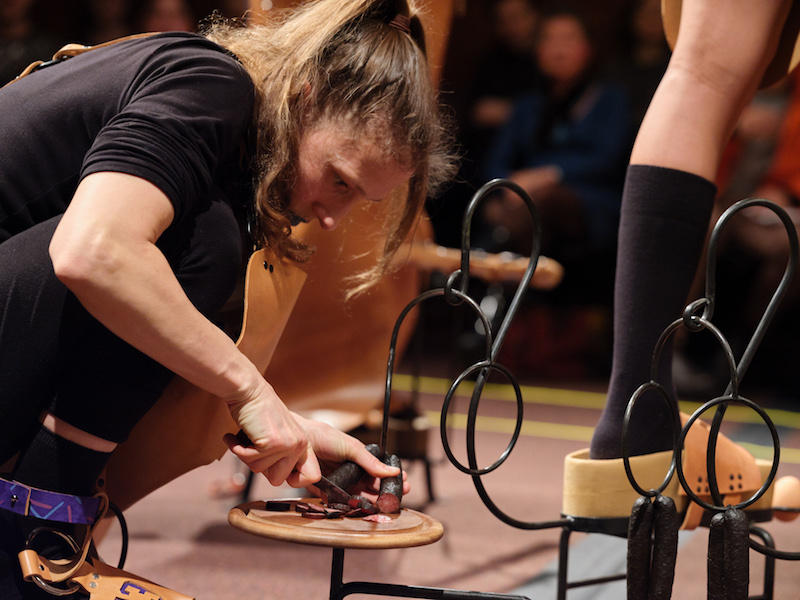 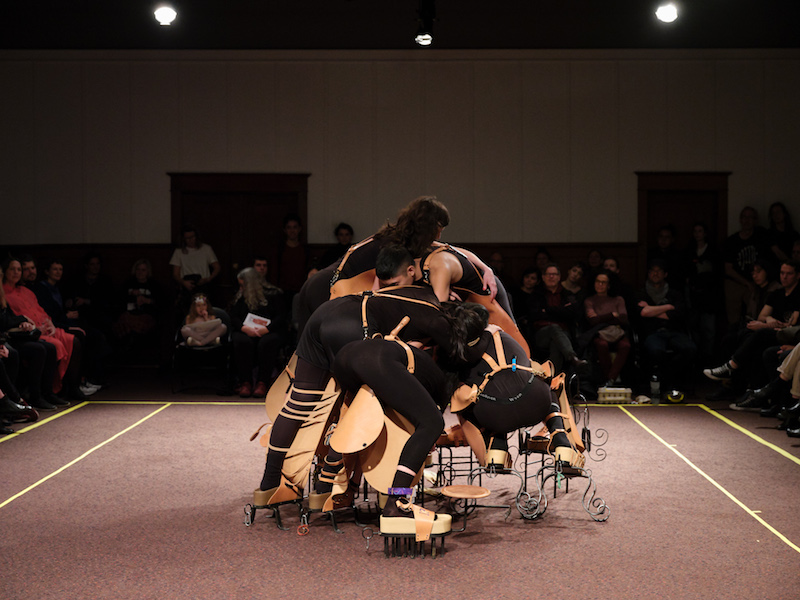 AH: The costumes and props you use in your work often have a surreal quality that makes their practical use seem unimaginable. They can function as stand-alone art objects, but you use them in your performances, films and photo shoots, too. Can you talk about the process behind creating these guises? Do the costumes come before the characters are developed or vice versa?

MB: It totally depends on the work. The idea for ‘Idealverein,’ for example, came from an iron rod used to hold fire logs. I was sitting at a fireplace, and I saw one next to the fire and I thought: “wow, they look like shoes. Like high heels.” Then I decided I wanted to make steel shoes. That was the ignition for the work, but over the long process of making them they became more complicated. I added sausages, because they are kind of funny, but they also make it very hard to walk in the shoes. As soon as you lift your foot, they start swinging. You can only get relief if someone cuts them.

When I arrived at Künstlerhaus Bethanien, I already had a film in mind that I had received a grant for from the Canada Council for the Arts, and had begun making some props for. I decided to make the film here and use the time in the residency to make a set for the exhibition. I came from Canada to Berlin, and I felt like I needed some safety. I love leatherwork, so I went and bought a horse saddle in Pankow. It was so stinky that I had to wash and scrub it for hours in the shower. But all I had to dry it on was my mom’s wheeled suitcase that she had lent me. And when I put it on top, it was exactly my height. It was perfect. Then it took me a good week to figure out how to build up the suitcase so that I could ride it, so it could carry my weight.

I also made a boxing bag, which is actually very nice to hug. It already comes with all the weight of what it represents, so it doesn’t need to be used as a boxing bag. It just needs some tenderness and some company. 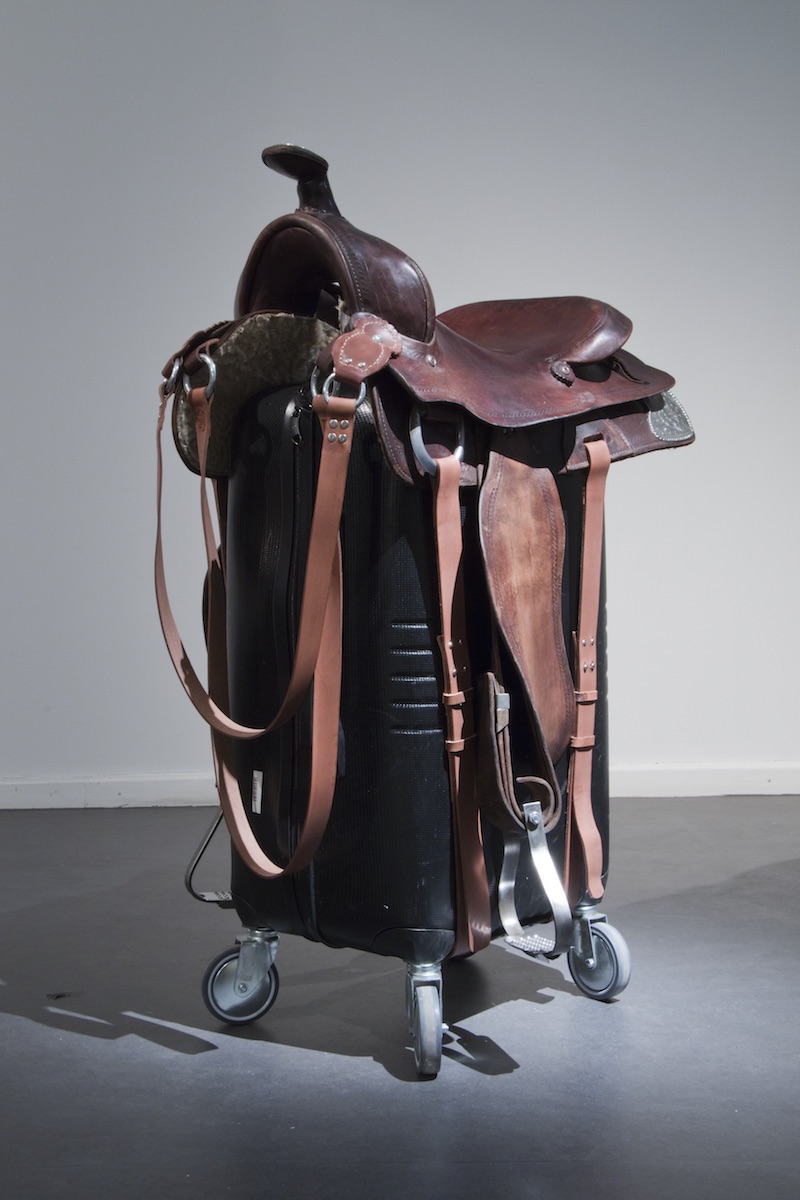 MIke Bourscheid: ‘Sunny Side Up and other sorrowful stories,’ 2021, exhibition at Künstlerhaus Bethanien // Photo by Mike Bourscheid 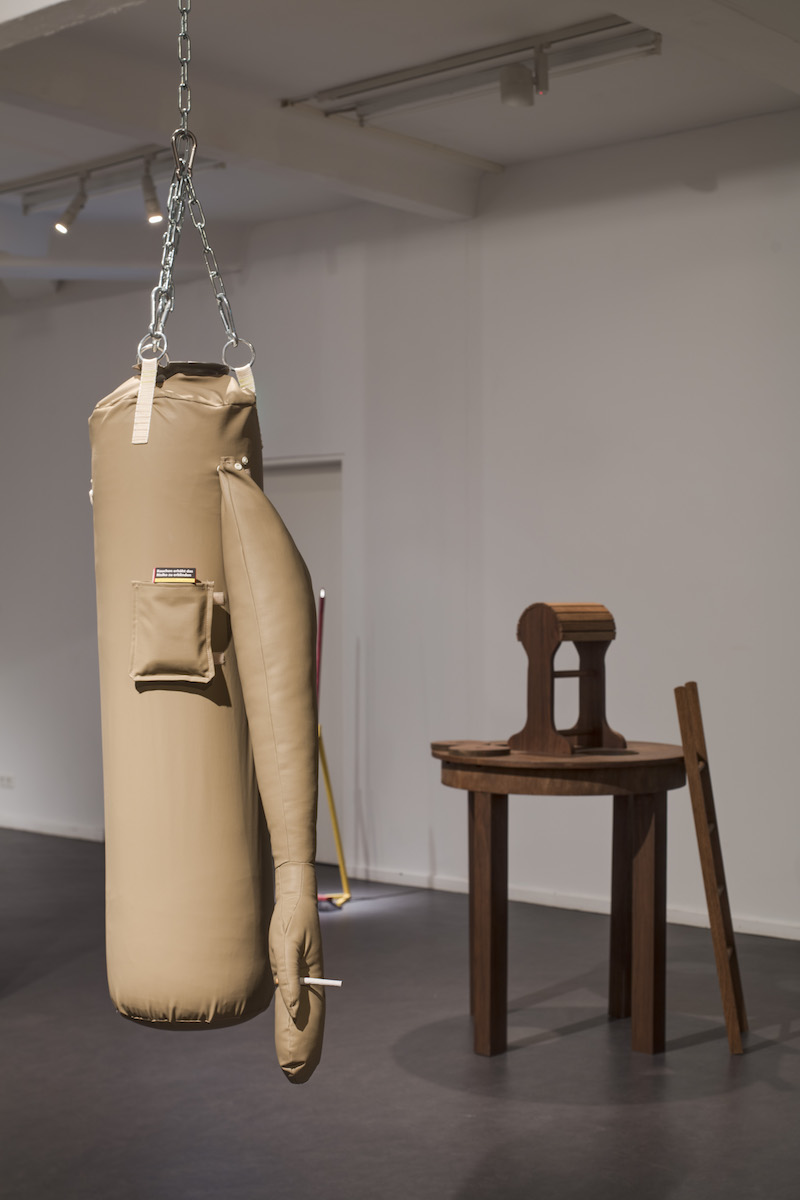 MIke Bourscheid: ‘Sunny Side Up and other sorrowful stories,’ 2021, exhibition at Künstlerhaus Bethanien // Photo by David Bradt

AH: In your practice, you use a lot of masculine signifiers, like the cowboy accoutrements and the boxing bag, but you always manage to subvert it with soft uses in the work.

MB: It’s very important for me. I am a big guy. I’m quite tall and I’m always aware of my bodily presence. Especially when I do performance, I can never get rid of my body, my jockiness. But I can make it tender. It’s important for me to show my more feminine side, as well.

AH: You did a work back in 2013 called ‘Der Hammel von Kouver; Introducing myself to the Canada Geese,’ where you composed an introductory greeting for Canadian geese on a DIY bagpipe.

MB: That was the work that prompted me to buy a sewing machine. I realized I could put more time and energy into my costumes. There’s tons of Canada geese in Vancouver and at the same time there was a ban on bagpipes in the city. They’re both really loud. So I decided I’d build a bagpipe, because I shouldn’t. If the reed in the bagpipe doesn’t play properly, it kind of sounds like a Canada goose. 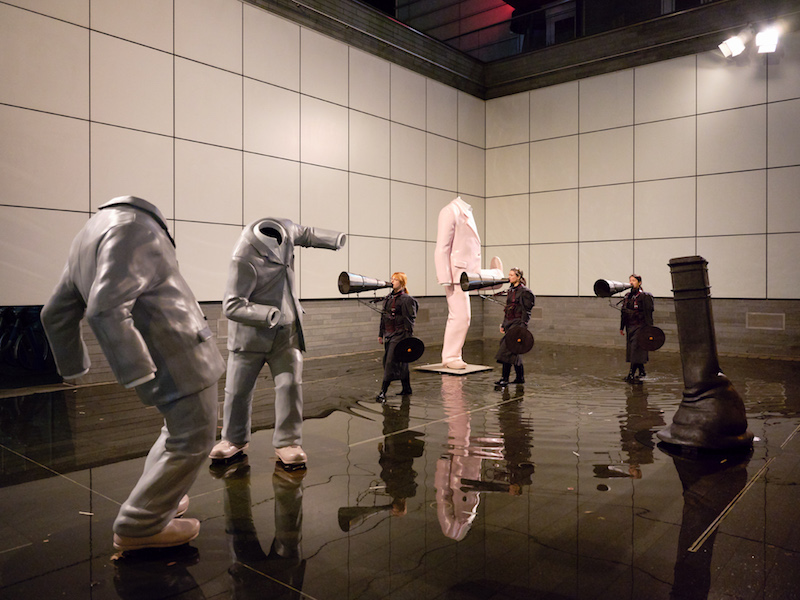 AH: You have other works that focus on musical composition, as well, like your 2019 piece ‘Ledgers,’ which was a response to Erwin Wurm’s sculptural installation ‘Big Disobedience’ in Vancouver. Can you tell us about how you chose to react to that exhibition?

MB: The neighborhood where the exhibition took place is a district with a lot of banks and offices. It’s a very rich area. Erwin Wurm’s piece reacted to that. The sculptural works were all men in suits—they were headless, but they had very masculine postures.

I had a job at the time as an art handler, so I was often in that district, in those office buildings, but through the back entrance. There are tons of people working in the buildings who are invisible, who take out the garbage or work in the basement or come in through the back alley, like me. I wanted to bring that reality to the place, as well.

I worked with composer Robyn Jacob to come up with the music. At the time, I was really into Hildegard von Bingen and chanting. I wanted something beautiful and polyphonic, so I made these cones. With the cones it’s very directional, so if all three cones are directed at you then you get all three verses, but if they turn then you only get one part of the story. That’s what Erwin Wurm did: he showed one part of the neighborhood. For me, Wurm’s sculptures were three men in suits, so I wanted to bring three female-identifying people to the space to balance things out. I wanted to give a bit more to the story. What you get really depends on where you stand.