One could say that Nadya Sayapina’s life and art are inextricably marked by a double occupation—the now almost permanent occupation of Belarus by Russia, as well as Russia’s ongoing invasion of Ukraine. Since October 2020 the artist, researcher and arts educator has been living in exile after being forced to flee her home in Minsk, Belarus. Her subsequent path first took her to Kyiv, which she later left for a residency at the HFBK University in Hamburg just a few short months before the war started in February. Not being able to return to Ukraine, she has stayed in Germany, where her practice has often become a form of mediation. With the incorporation what she calls “slow storytelling,” Sayapina uses performance, multimedia installation, painting, text and art therapy to give space to excluded voices, thus illuminating individual experience behind slogans and general issues.

As a Belarusian curator and writer, I come from a similar background and am concerned with the layers of contradiction and complexity resulting from this double state of occupation. For this reason I sat down with Nadya Sayapina to talk about her strategies of coping and how her art has changed in exile. 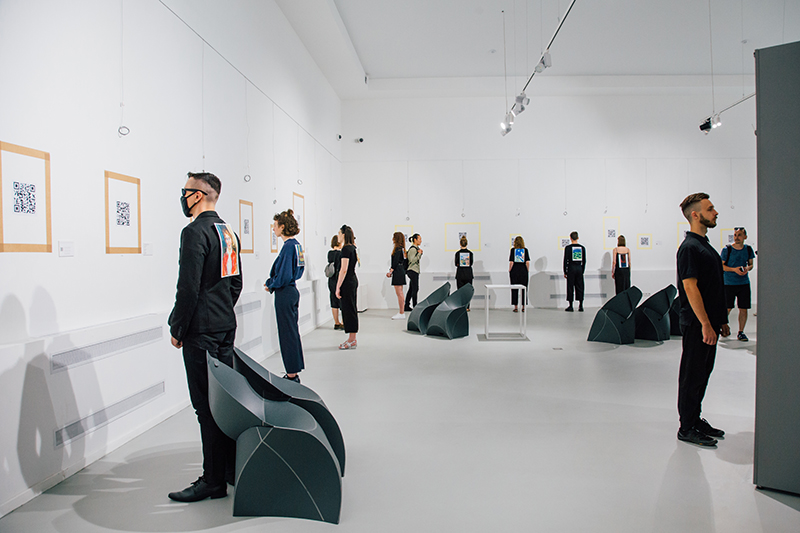 Anna Karpenko: Since 2021 you have been living in Germany but your story is directly related to both the protests in Belarus and the war in Ukraine. What happened between these three points on the map?

Nadya Sayapina: In Autumn of 2020, I was caught up in the first wave of targeted repressions against the cultural sector. On September 7, I was detained at my home, searched and arrested for 15 days for taking part in a protest action of cultural workers against violence. On August 15, 2020, hundreds of cultural workers came out with placards depicting people beaten by the riot police during peaceful protests, calling for an end to the violence. There was an open letter against repressions, signed by about a thousand cultural workers. I was convicted almost a month after the protest action. The accusation was based on a picture from Facebook in which I was tagged.

Three weeks after I was released from detention, I left Belarus with my partner. I was afraid of persecution, repeated arrests, and not being permitted to work. I learned about a foundation in Kyiv that helped human rights defenders and activists with relocation. This is how Ukraine became my new home. I liked Ukraine. I made friends among the locals. The Belarusian community there also grew as more and more people were forced to flee. The problem for any migrant is that it is difficult to find a job and savings quickly run out. Every once in a while I had a residency. One of them was the ASA exchange program at HFBK University in Hamburg, where I was invited as a lecturer. In November 2021, I came to Germany. Today it is no longer possible to return to our second home, to Ukraine.

AK: There was a threat of criminal prosecution for the artistic statements and activities that you made back in Minsk. How has your attitude toward artistic practice changed after that?

NS: My most direct protest work was a group performance titled ‘The Heritage’ (2020), which was a reaction to the seizure of a large collection of Belarusian art belonging to one of the banks. The manager of this bank, a presidential candidate, and two members of his campaign staff, musician Marya Kalesnikava and lawyer Maxim Znak, were sentenced from 12 to 15 years of prison. The son of V.Babariko, Eduard has been in a pre-trial detention centre for almost two years without any clear status in the criminal case. Many people thought my arrest had something to do with this performance.

After such events, you start to experience a lot of fear and you begin to self-censor. The situation got worse because they hacked my Telegram account and used my personal correspondence for a propaganda program on Belarusian television. This provoked new fears and an urge to be silent, as if silence could protect you from being hunted. While I continue to speak out, I am also looking around, carefully choosing every publicly spoken word, every text. 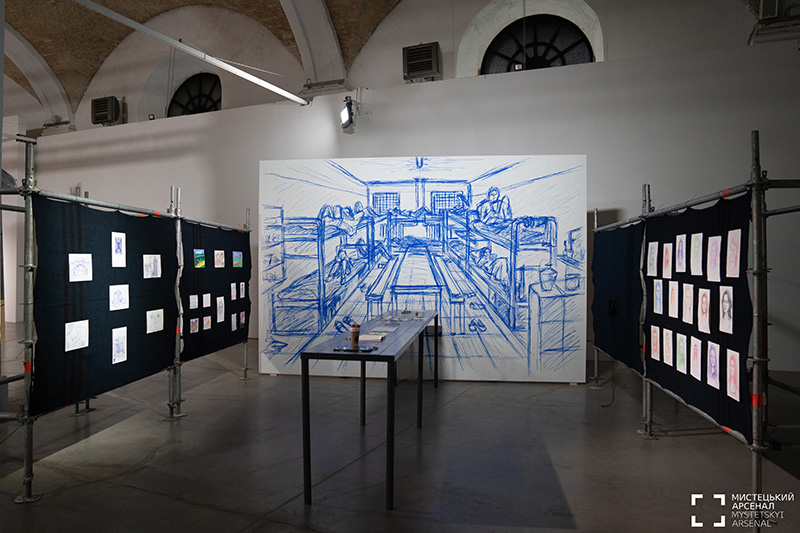 AK: The language of art in dictatorial countries often becomes the language of street-posters and slogans of resistance. What language do you speak now?

NS: A few months after I left, I realized that I no longer wanted to shout out slogans. It was important for me to delve into humanity, to collect the archive, to go from the general to the specific, to actual people and their stories. My language today is mediation; I see myself as a mediator, gathering and retransmitting the voices of others. My work is about caring, empathy and slow storytelling.

The installation ‘Dollhouse’ (2020-21) was based on my drawings and portraits of the women with whom I shared a cell back in the Akrescina and Zhodino pre-trial detention centers. What really mattered to me, however, was not to show the experience of imprisonment itself, but the mutual support, the sisterhood, that, even in the most inhumane conditions of imprisonment—like when you have a hole in the floor instead of a toilet and no basic hygiene products—transformed into a fantasy place where we could comfort and support each other. In this world, we took care of each other, massaged each other, braided each other’s hair, drew pictures together… in other words, lived in a “Dollhouse.” This project was then complemented by the video performance ‘We washed each other’s hair’ (2021), an artwork that showed the transformation of such a simple act as washing one’s hair into a metaphysical act of sisterhood and solidarity. 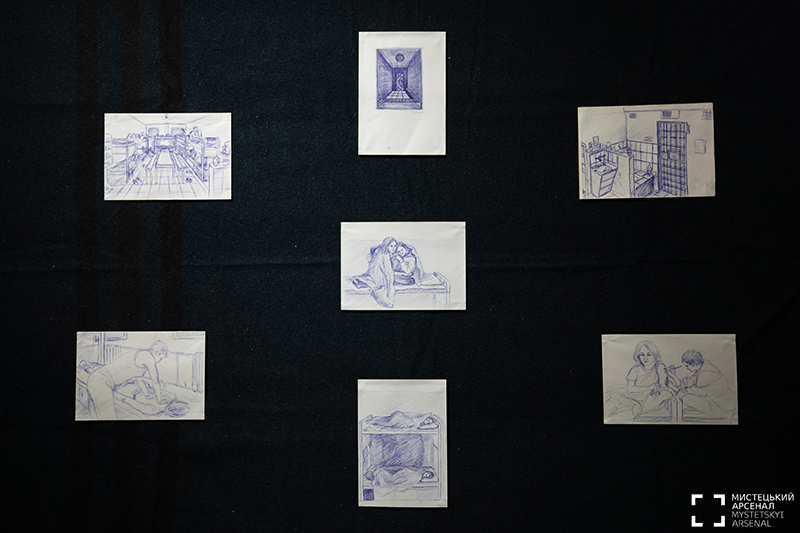 AK: How are you dealing with the war, when Belarusians and Ukrainians have one enemy, namely a country with imperial ambitions that denies our national identities? I am afraid that it has become blurred now that Belarusians in 2020 struggle with two dictators—Putin and Lukaschenko.

NS: A huge part of what I experience is guilt and self-condemnation. I tried to express a lot of things in the project ‘A Letter to Mom’ (2021). I wanted to show how this “survivorship bias” of a temporarily sheltered person works: you are always comparing yourself with other victims, striving to help, to save, and at the same time you are forbidding yourself to be happy. This is something that is always there in me now. I feel uncomfortable being here in a safe country and not in Ukraine. I feel ashamed that I am not helping enough, that I am not able to speak out quickly and vividly. 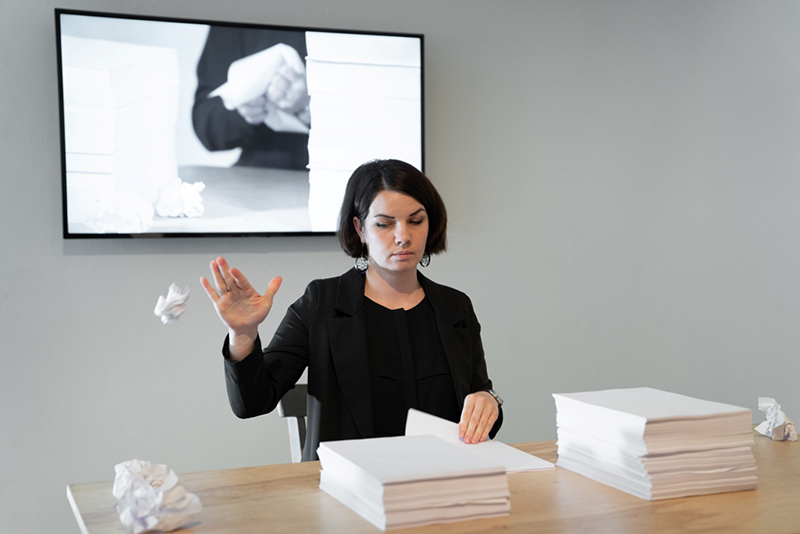 Another range of emotions is fear and hatred. Thinking all the time about what’s next, worrying about friends and acquaintances and those who have stayed in Kyiv or have been evacuated. Being totally immersed in the information flow and being afraid to limit it so you don’t miss the important stuff. Feeling hatred towards aggressors and murderers. At the same time, one fears the prejudice of others. Belarusians are already facing discrimination on the basis of their passports, even though most of us have run away from persecution for our views in our homeland.

But the most frightening emotion to me is the loss of faith in human beings, in their activities, in their ideals, in art, in the meaning of any act and statement. Everything loses its meaning amidst the war. 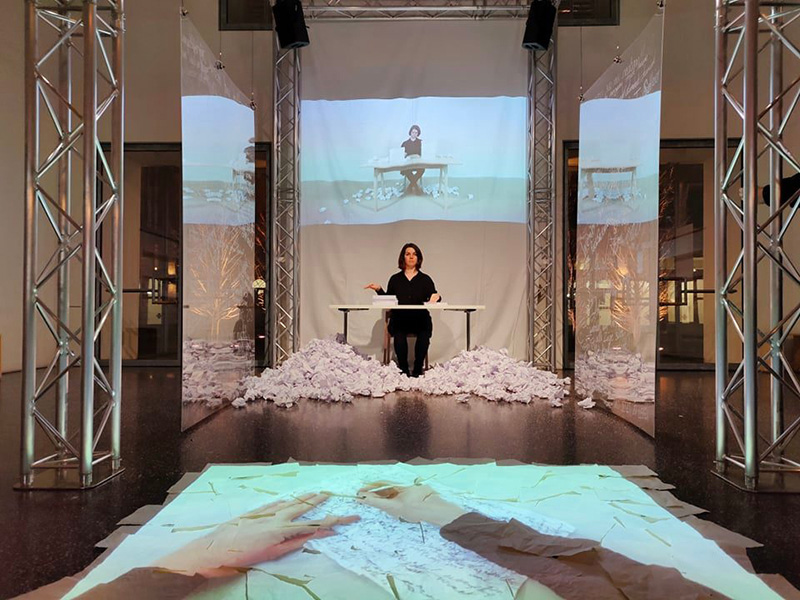 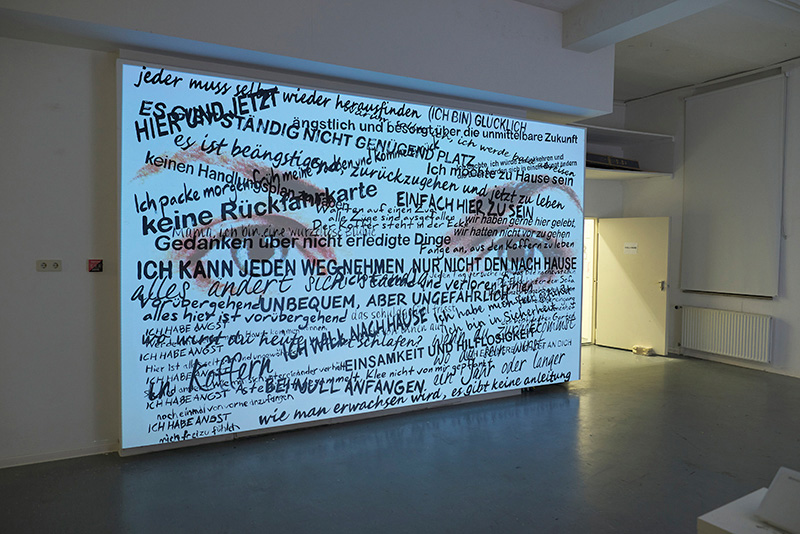 AK: What can your art tell the world today?

NS: It tells about people, about the individual stories behind general terms such as “protest,” “feminism,” “migration,” “bureaucracy,” “home,” “body,” or “trauma.” It emphasizes that we are all one and at the same time unique. This is both our weakness and strength. It is my empathy, solidarity on the part of my art. In general, I’d like to steer the right course at the moment, not to let the pain and disappointment extinguish my beacon, which, I want to believe, illuminates the way for some ship.