It’s a warm Spring afternoon as Vanessa Brown greets us in the courtyard of her Kreuzberg studio. Tucked away from the hustle and bustle of the main street, this little nook feels like a haven of tranquillity. We make our way upstairs, passing the studios of neighbouring artists along the way. Vanessa’s studio—where she has been working for the best part of the last year–is bright and airy, profiting nicely from the midday sunshine as it bathes in its soft glow. The room is partitioned by a central wall, acting as a division between her working and living space. Visiting just a few days before she heads off again to her next venture, we take the opportunity to sit down together and talk about the process and inspiration behind her works. 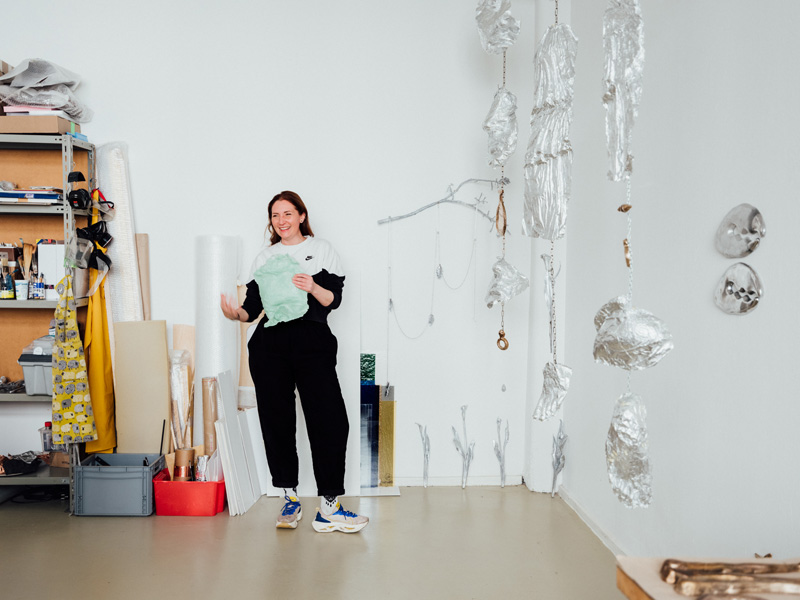 With a practice that is predominantly workshop-based, Vanessa has centred her work around the medium of steel, occasionally integrating items such as textiles and stained glass. Though originally drawn to video and sculpture while studying back in Vancouver, she recounts how metal was the first time a material really spoke back. For something so heavily associated with industry and war, she was amazed to discover that such a material could also be so slight and malleable. “People would mistake my work for cardboard or paper sculptures,” she laughs, emphasising the delicate appearance the material can take. Wanting to move away from the uniform industrial processes surrounding metal fabrication, she set about finding ways to see her own hand in the process. Rather than choosing the clean cut lines inherent to mass production, she demonstrates how she would use a plasma cutter and cut freehand, not caring that the lines wouldn’t be perfect. “I like to see a trace of myself in the art,” she explains, adding that you can still see the brush strokes from the oil paint that she used to paint her sculptures. 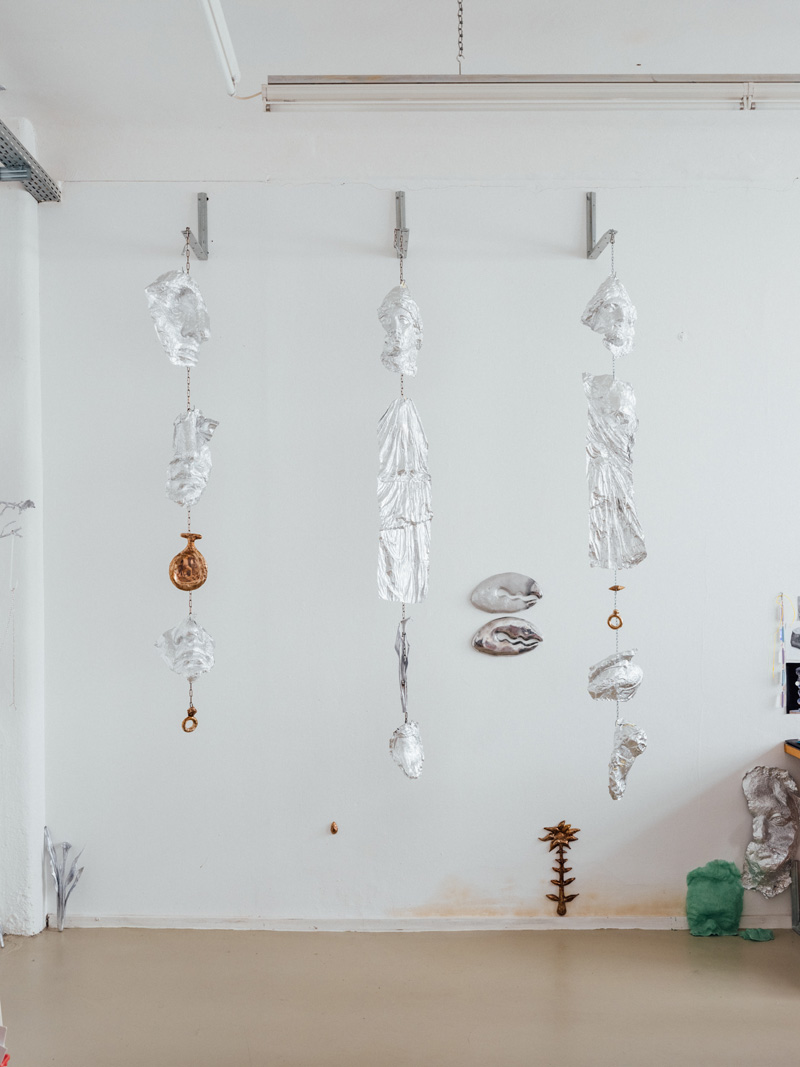 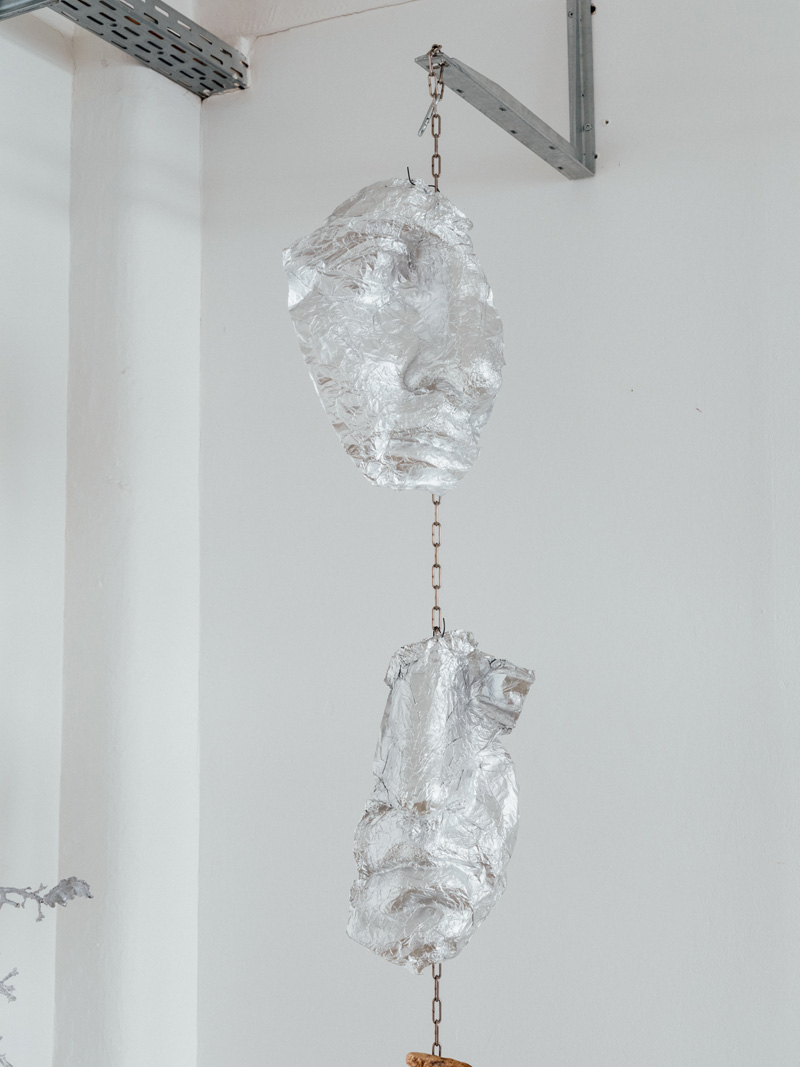 In the corner of Vanessa’s studio a large sculptural installation grabs our attention. Hanging from three separate hooks, delicate aluminium sculptures are suspended from a metal chain. Glimmers of sunlight bounce off their silvery surfaces as they turn slightly in the breeze. We listen attentively as Vanessa explains the inspiration behind her work ‘Amazonians’ (2021), taking us back to her time spent around Copenhagen. Initially intended for 2020, yet postponed one year due to the pandemic, Vanessa undertook a residency at a bronze foundry in Denmark. A few weeks into the residency, and after showing a keen interest in statues, she was recommended to the Royal Cast Collection—a collection of over 2000 plaster casts and sculptures. Allowed to work directly with the materials on offer, she made a series of foil impressions—most notably the two Amazonians and the bust of Hera that we see in her installation. Fascinated with mythology, this inclusion of the Amazonians and Hera is something important to Vanessa. Combined with Hera as the goddess of the household, the Amazonians act as a “community of women”—a beautiful sentiment that she is still in the process of exploring. We were amazed to hear that she had landed on using just a simple tin foil to craft these works. Despite their fragile constitution, they appear substantial. She tells us a little dolefully that as foils are bound to change and transform, the ones before us have become crunchier and more brittle looking than at the start. To us they still look radiant. 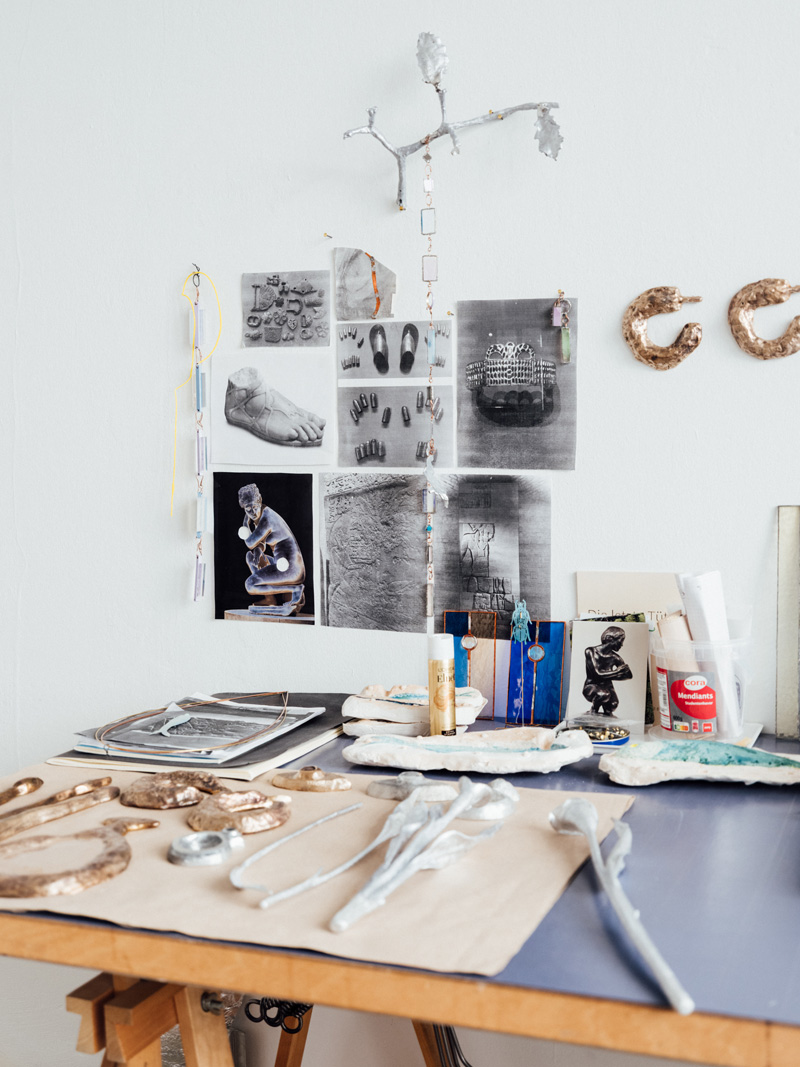 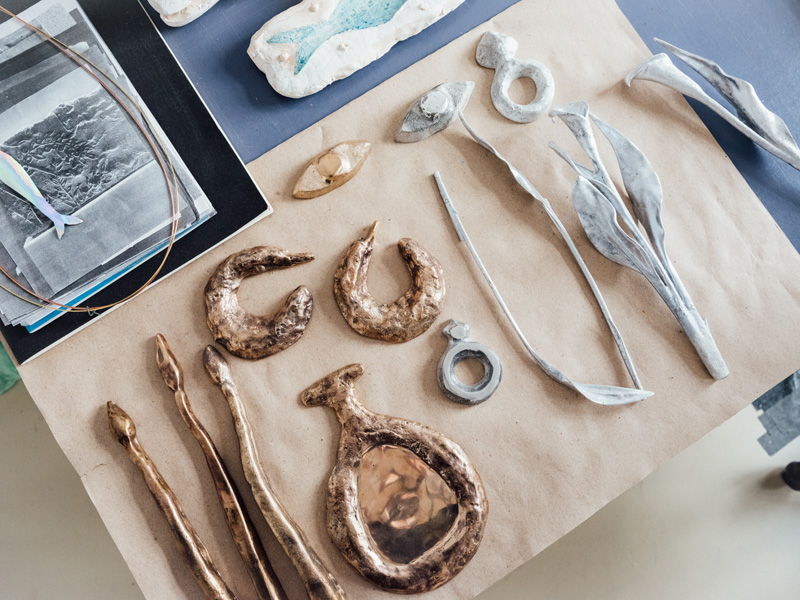 Next to this sculptural installation, an array of smaller pieces crafted from various metals lie scattered across her desk. We are drawn to a set of reliefs and casts—one of bronze and the other aluminium. I pick up each work, weighing them in my hands. I’m stunned to feel the difference in weight and density, despite the works being of equal size. A particular favourite of hers, Vanessa takes the aluminium work and begins to describe its process. Returning to her days at the foundry, she talks about her opportunity to work in lost-wax and sand casting methods. The lost-wax process, in which molten metal is poured into a mould that has been created by means of a wax model, also forms the basis for the future work of the busts seen in ‘Amazonians.’ Explaining how she took a real lily and applied this process, we are dumbfounded by the delicacy and precision achieved. 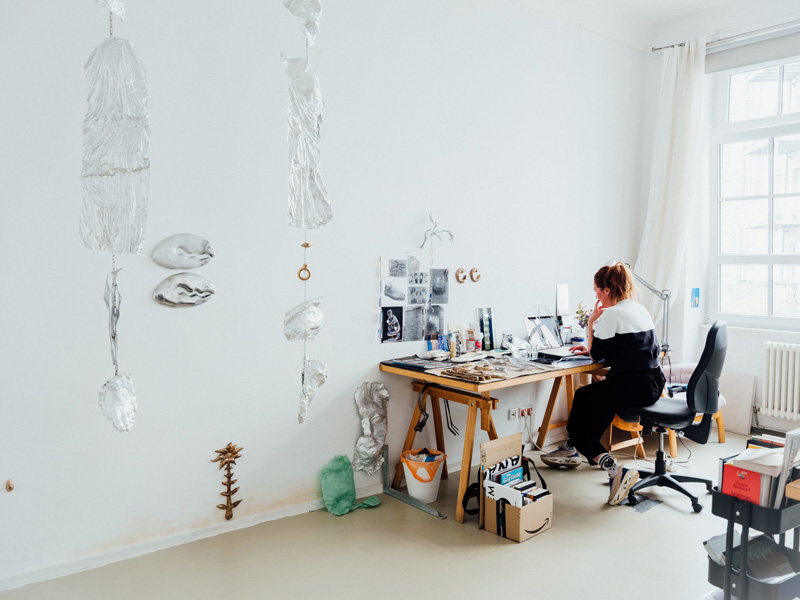 While the works before us appear dainty and slight, it is the practical, industrial element that Vanessa enjoys the most. Spending time in the more industrial suburbs of Copenhagen, she was continually surrounded by auto businesses and Bauhaus-esque stores. She recounts how her studio space was a whopping two and half times the height of her current space, prompting the need for heavy duty brackets and chains to hold up each work. Talking about her experience of working in similar warehouse environments, the conversation leads us on to one of Vanessa’s recent works—a public art commission entitled ‘These Hands’ (2022). The work features two large scale hands adorned with colourful rings and nails, situated on the facade of an industrial building. This juxtaposition between what is considered traditionally feminine and masculine is what brings particular interest to this work, with Vanessa delighting in the work’s placement. 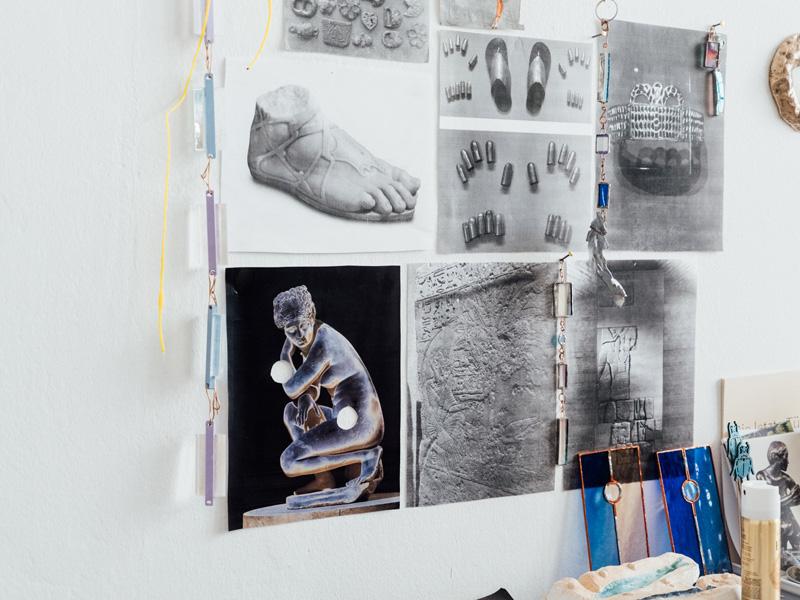 Before we head off, Vanessa guides us down into the basement and introduces us to her workshop. A whole world apart from the light and breezy space of her studio, she gears up and gets straight to work. It’s here that we really see her come to life—the passion and excitement with which she describes her practice is intoxicating. Using her aluminium cast as a model, she fastens it into a clamp and begins to grind and hammer away. Absorbed in her tools, we watch and come to truly appreciate the enormous amount of effort behind each of her works. Of particular admiration is the fact that Vanessa makes all the materials herself. Finding pleasure in fabricating her works from scratch, they act simultaneously as a form of therapeutic escape. 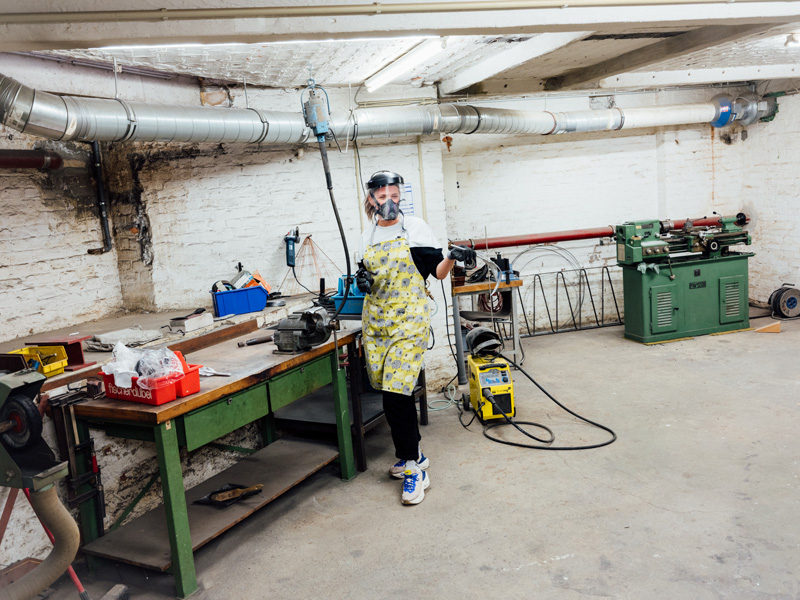 Now away on research, Vanessa will open her forthcoming exhibition ‘Holes’ later this year at the Richmond Art Gallery in Canada. Although unsure whether or not the foils will make their way into the show, it is still sure to showcase the complexity and endeavour achieved in each of her works.