This article is part of our feature topic ’FAKE.’

“Fake” is the thread weaving through all of Emma Adler’s works and it appears in different forms: virtual reality, replica, realistic theatre prop, an unrealistic concrete wallpaper, an artificial tan, a conspiracy theory or even a name. Fake layers on fake to build immersive installations that are slick, often illuminated by UV light and full of phosphorescents and phthalo hues. There is something of a 90s rave aesthetic that colours the work, which often references the early days of the internet and recalls first-person shooters like the 1993 classic ‘Doom.’ Though Adler’s sources of research are often political–conspiracy theories have been a major theme for the last five years or so–it’s the form of the fake and what it could mean that ties her practice together. This is a concern that is not so much superficial as grounded in aesthetics and art history rather than politics per se. 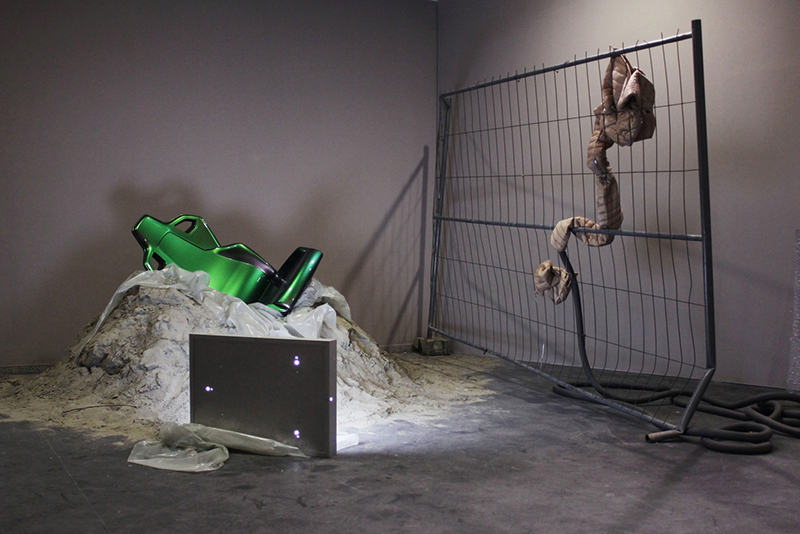 A questioning of art and art historical references can be often found in Adler’s earlier works. In ‘EEEEF#GE (E.A.o.T)’ (2015) she depicted herself as her historical namesake, Emma Adler (1858-1935), an Austrian writer and journalist who posed for a painting of the Virgin and Child by Emanuel Oberhauser. The backlit photograph also references an Otto Dix painting from 1926—a postcard version of which Adler manipulated, but in which writer and journalist Sylvia von Harden, not the Austrian Emma Adler, was pictured. The circular referentiality is not only a meditation on identity through name and representation, but a questioning of her own position within art history as well as the role of art itself. In ‘EEEEF#GE (E.A.o.T),’ the artist-cum-journalist Adler wears a gold necklace with letters spelling, “Kunst ist keine Therapie.” A similar line of questioning occurs in ‘Death means nothing when you’re dead’ (2017), which is ultimately about digital reality but in which a small, seemingly inconsequential piece pokes at the nature art itself. As if forgotten in a corner stands a fake marble panel with the words, “What is art? (*Baby, don’t hurt me),” a reference to the 1993 Haddaway song, embossed in golden letters. As art morphs and changes with each generation, its definitions and boundaries shift leaving many artists, like the rejected half in a long-term relationship, potentially dumped into the trash bin of history. 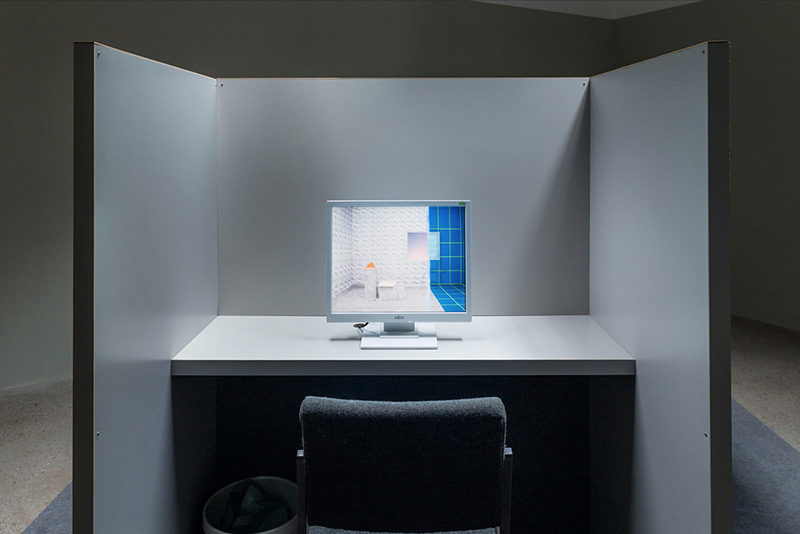 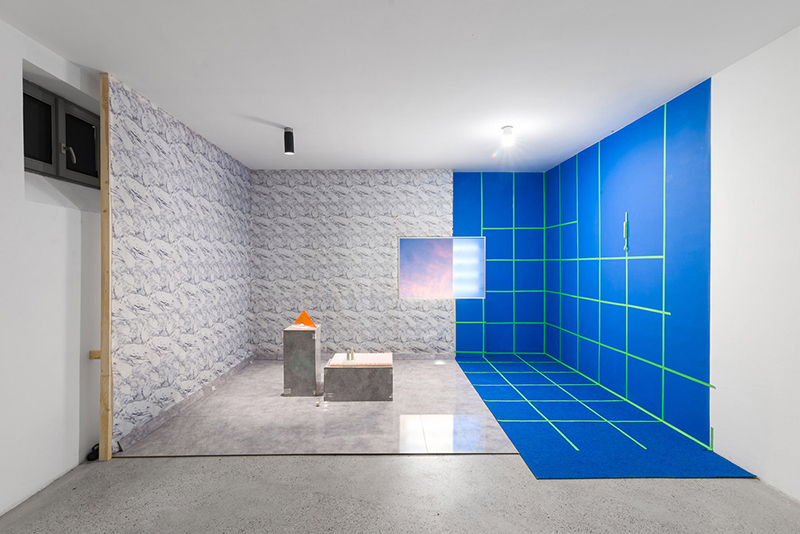 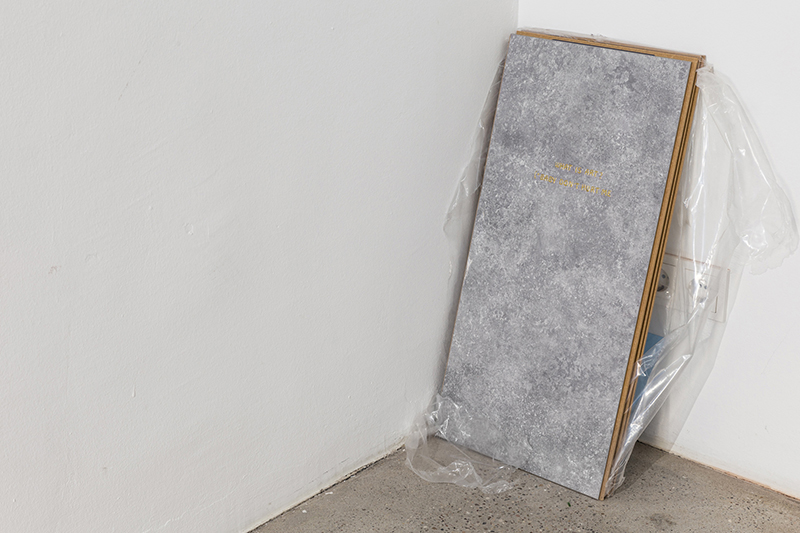 Some argue that what counts as art is decided by curators, collectors and perhaps even writers, though their influence has declined over the past 30 years. This reality lends art a sort of magical quality; the touch of the right wand can turn garbage into treasure. It also produces an uncertainty in reference to one’s own work—something for which many artists sacrifice stability and a living wage, making a belief in art eerily similar to belief in a conspiracy theory. Adler notes her interest in internet conspiracies was actually sparked by the rise of demagogues like Donald Trump and the concomitant normalisation of outlandish claims, the more extreme of which can be found in the “Project Blue Beam Theory.” Nevertheless, through her use of “fake news” in atmospheric, immersive environments filled with numerous other types of fakes, Adler encourages reflection on how we perceive and construct reality as such rather than just the specifics of our present political moment. 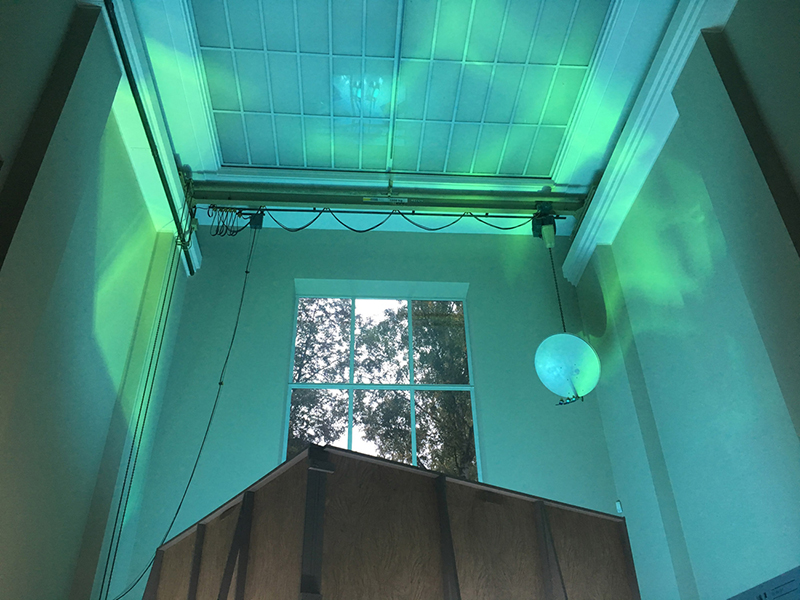 One such installation was exhibited in the studio of an artist who promoted one of history’s most dangerous conspiracy theories. In Kunsthaus Dahlem, the former studio of Arno Breker, official state sculptor for the Third Reich, Adler presented ‘REΔLITY SHOW’ (2018), a mysterious tableau complete with tanning machine and various simulated objects, like large rocks made of styrofoam balanced on iridescent plexiglass. Included in the show were absurdly meticulous YouTube videos from members of “Project Blue Beam” who use real footage from NASA to prove that the sky is an illusion created by huge projections and holograms. Adler admits that it is easy to laugh this fringe element off, because we, the rational and educated, know that the sun is a very large ball of hydrogen that, as a result of atomic fusion, radiates immense quantities of light. But then again, most of us do not know this from our own observations or calculations; we have learned it in school. So can we actually claim we know it or do we just believe it to be true? 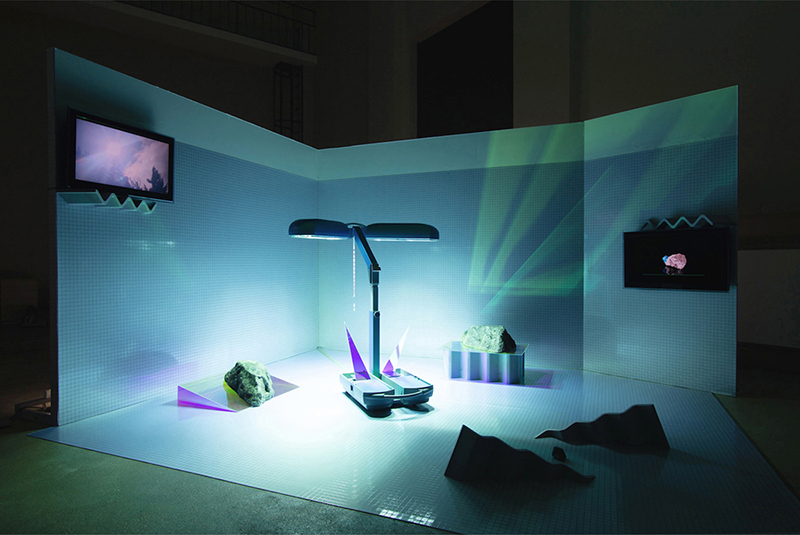 What at first seems like splitting hairs is actually a question of epistemology that examines the relationship between truth and perception, something that also lies at the heart of art. Some philosophers, like Edmund Husserl, believed that very careful descriptive observation can distinguish between essential and non-essential features, thus providing us some access to reality. Artistic formalism was an effort to transcend the ephemera of content in the hopes of reaching the underlying eternity of form—think of Kazimir Malevich and his “new realism,” which was supposed to evade the distraction of representation and access the senses and feelings directly. This particularly human hubris to believe in one’s senses is possibly the reason why Adler’s work is not didactic or openly critical. All perception is coloured by a touch of conspiracy, which makes the theories so convincing to some. Staying situated in the historic and aesthetic traditions of art is not an act of shirking responsibility as much as a humility in the face of our own capacity to understand and perceive. “It is far more interesting,” says Adler, “to make people look twice so as to question what it is they are really seeing. The strategy isn’t to reveal something as fake, but to create an additional twist that might end in a contradiction, like the concept of a fake fake.”

Adler’s most recent show, ‘SIMULATOR [SIC!]NESS,’ was part of a residency funded by the ZF Kunststiftung at the Zeppelin Museum in Friedrichshafen in 2021. There she created an immersive installation whose starting point was the virtual realm. Adler built a new entrance into the gallery space where she created a sort of lair wallpapered in a pattern made to emulate concrete but that, through its rote repetition, signified a digital space. The weird quasi-pixelated cave could just as well have been a room from a first person shooter. The central character in this scenario is naturally the player, who was only present in the form of his throne—a pricy piece of furniture known as the gamer’s chair. These chairs, which happen to be the preferred seats of basement conspiracy theorists, are based on race-car seating and can easily cost more than € 1000. They have more functions than an ergonomic office chair and sport names like “Secretlab Titan Evo,” “Cougar Explore,” or “DXRacer Air Series.” Adler received the plans for one of these chairs and created a copy that was painted, in a nod to its roots, a tone-shifting luxury car enamel. Ironically the copy, CNC-cut out of polyurethane foam, cost more to make, and now costs more to buy, than the original, even though the chair is unusable and rendered into pure form. As if to emphasise its uselessness, and to prompt a reflection on the worth and function of art, it was displayed on a large heap of sand and a plastic sheet, as if discarded at the side of a construction site. 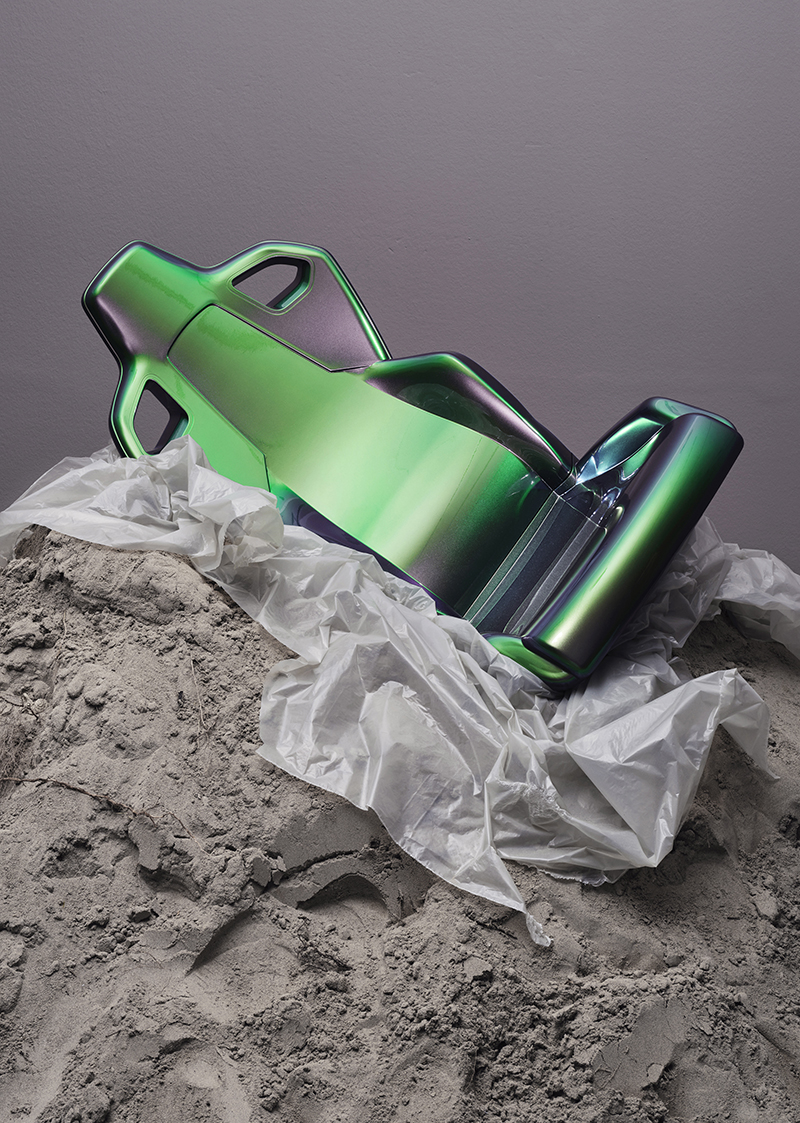 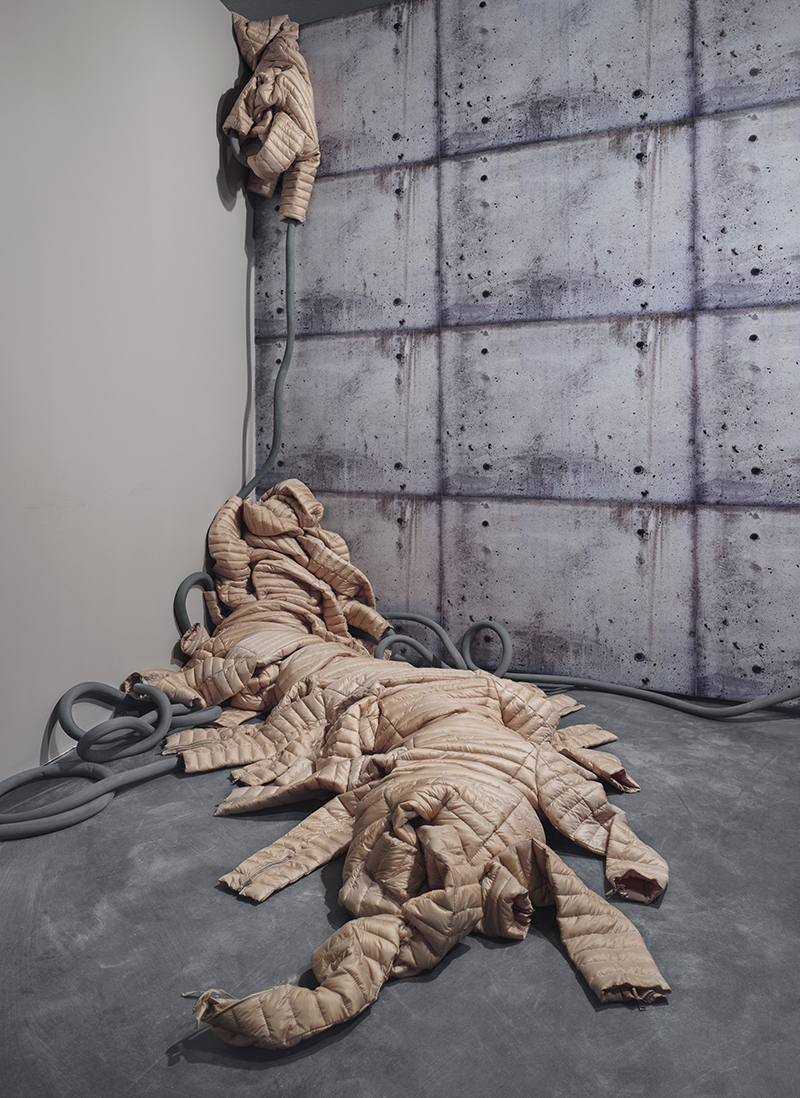 Lying in a corner was ‘(Qreatur2)’ (2021), a rosy-beige coloured heap of sewn together puffy jackets. Their colour is supposed to be “nude”—a taken-for-granted label that points to the common denominator of white supremacy—and their many arms evoke tentacles. After a while one realises that the creature is gently pulsating, even breathing, like a monster from David Cronenburg’s ‘Naked Lunch’ (1991) or the mutant boss at the end of a video game level. In Adler’s installation, the generic jacket alludes to the ubiquity and normalisation of fringe social elements. Conspiracy theories, like the Q-Anon referenced in the title, are becoming the norm.

The idea of skin, whether it be digital or real, and its connotations with superficiality, is central to how Adler approaches the fake. What skin might lack in depth, however, it makes up for in breadth; it is, after all, the largest organ of the human body and determines how we interact with, if not understand, the world. This attention to surface, perhaps ironically, could locate her amongst modernists like Frank Stella, whose oft-repeated quote from 1966 has become something of an art cliché, “what you see is what you see.” Adler might be understood to take this idea one step further, not in that she moves beyond the surface, but lingers upon it to question how our eyes differentiate between truth and falsehood. Her approach could be described by a slightly augmented version of the Stella quote: what you see is how you see. It is the relativity of this “how” that she highlights in the various forms of the fake.