When we think of gossip, our mind often wanders to days on the playground, to trivial chit chat among neighbours, or for the unlucky few such as myself, to senseless whispers that circulate in an all girls high school. The endless flow of hearsay and scandal carries with it a destructive capacity. From ruining friendships to destroying integrity, gossip has, with good reason, obtained itself a bad reputation. Yet not everyone holds gossip to such contempt. Take Israeli intellect, historian and professor Yuval Noah Harari, who asserts that gossip based on judgement is what allowed humanity to begin its rule of the planet; before, we were just another mammal in the food chain. This same gossip, with its cataclysmic powers, in fact empowered us to bond with one another socially, giving us that evolutionary edge over the rest of the animal kingdom. “Social cooperation is our key for survival and reproduction,” he writes in his ‘Sapiens: A Brief History of Humankind,’ “It is not enough for individual men and women to know the whereabouts of lions and bisons. It’s much more important for them to know who in their band hates whom, who is sleeping with whom, who is honest and who is a cheat.” It acts, as such, as a social groomer.

With this in mind, it becomes slightly more challenging to deny gossip’s productive capacities. With the ongoing project ‘GOSSIP GOSSIP GOSSIP,’ curators Anja Lückenkemper and Sandra Teitge explore this notion further. Taking the beneficial aftermath of gossip as the foundation for the ongoing series, they reject the premise of gossip as inherently wrong or fruitless, to instead herald the notion as a type of activism, or more specifically, as an ancient tool of female knowledge production. 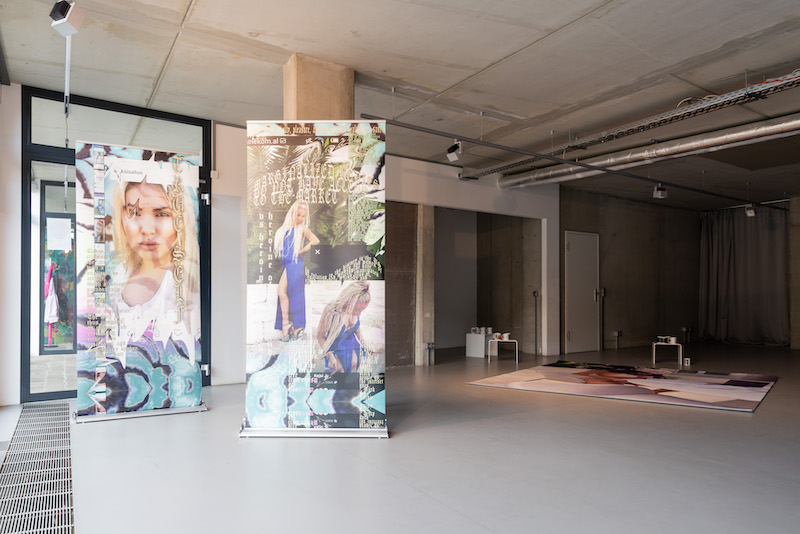 Installation view in ‘Fakes, Fictions, and Forensics’ at feldfünf // Photo by Victoria Tomaschko

The evolutionary biologist David Sloan Wilson concluded that today’s gossip continues to reflect the same social grooming strategies developed in the prehistory of humanity. By holding members of society to agreed upon norms, we can regulate the behaviour of individuals. Wilson additionally states that the theory of gossip as a tool for cooperation and accountability has important implications for how we might use social-media platforms—such as Facebook or Instagram—to encourage responsible behaviour. ‘Fakes, Fictions and Forensics’—the first in ‘GOSSIP GOSSIP GOSSIP’s’ ongoing series of events—reconsidered gossip not as “empty talk,” but rather, as emancipatory reappropriation, as a powerful means of communicating information about rules of conduct, strengthening bonds, and creating a multiplicity of female identities. Developing upon this new understanding of gossip, works by Anna Ehrenstein, Nora Heinisch, Natalie Paneng, and Franziska Pierwoss were presented in this brief two-day exhibition in order to question perceived norms. The artists focused on female identities—on the fakes, fictions, realities and perceptions that make them up. 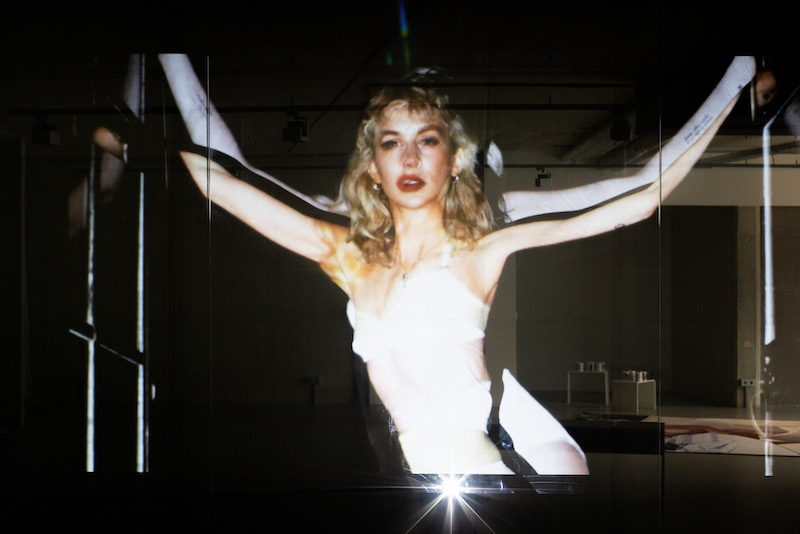 Nora Heinisch: ‘Why can’t I hold all these projections?’ 2020-ongoing , video loop at feldfünf // Photo by Victoria Tomaschko

It is no secret that social media is often just a mirage—a veil of filters and photoshop cast over an unrealistic documentation of the life portrayed. It is best known for its mounting pressure to conform to an unworkable beauty standard. In an ongoing visual investigation, Nora Heinisch’s ‘Why can’t I hold all these projections?’ (2020-ongoing) juxtaposes what’s real and what’s not, exposing the elevated and absurd beauty standards found throughout social media and the celebrity world. Depictions of “role models”—celebrities, stereotypical brides, mothers and housewives—are projected onto the bodies of other women, as they, in turn, attempt to fit themselves into the image of the projection. From Lindsay Lohan’s Terry Richardson photoshoot, to Kate Moss on the cover of Playboy, heavily photoshopped images provide a stencil into which women stretch and twist their bodies so as to mimic that of the model’s. As one woman attempts to become the image of another, a process of homogenisation begins, allowing little room for diversity or a “multiplicity of female identities.” Accompanied by a deep, rhythmic sound piece, the work feels profoundly dystopian.

Wilson’s notion of gossip as a tool for accountability begins to deteriorate in this context. If gossip could hold people accountable and become a tool to encourage responsible behaviour via social media platforms, why do these absurd, nay unhealthy, images still exist? The fakery that surrounds the images used in Heinisch’s video investigation does little in the way of inspiring responsible behaviour or celebrating the multiplicity of female identities conjured through our positive rethinking of gossip. 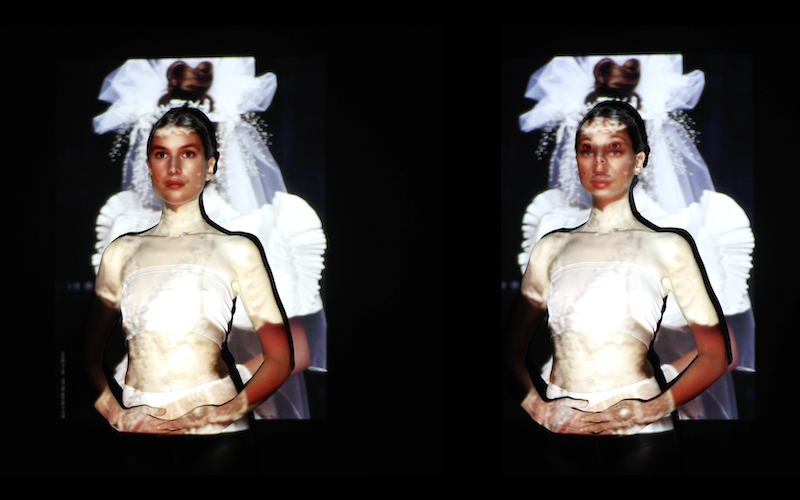 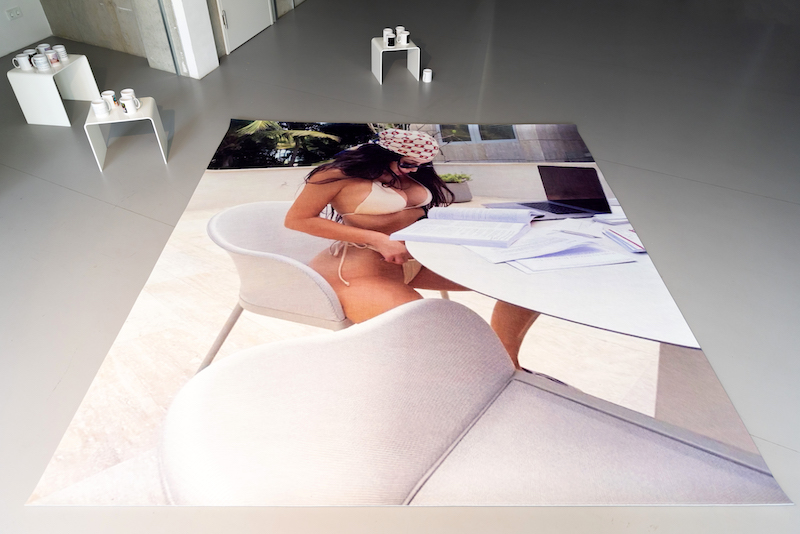 While the rumours and disgrace that accompany gossip can be what break you, they can also be what make you. Consider Kim Kardashian, whose fame and fortune undoubtedly profited from the scandal surrounding her leaked sex tape back in 2007. Although already working for socialite Paris Hilton, it wasn’t until her name was plastered over gossip mags that stardom truly came her way. Yet can the gossip and imagery that circulates Kardashian continue to be deemed productive? Taking an image from the celebrity’s Instagram feed, Franziska Pierwoss traces the identity of Kim Kardashian in ‘Studying in the Sun’ (2022), unearthing an ambivalence in her character. The notorious, somewhat ironic, image of Kardashian posing in her bikini as she studies for the bar exam is blown up and printed on a large-scale rug. In a potentially significant gesture, the viewer is forced to look down on Kardashian in order to view the work.

By presenting this image in such fashion, Pierwoss highlights the absurdities of Kardashian’s social media self-representation. Instead of tempering her exaggerated and unrealistic stagings, gossip in fact encourages and upholds Kardashian’s lifestyle. While this may be beneficial for the continuation of the reality star’s financial situation, all too often her presence comes across to the outside world as a joke—a favourite object of ridicule to the public eye. 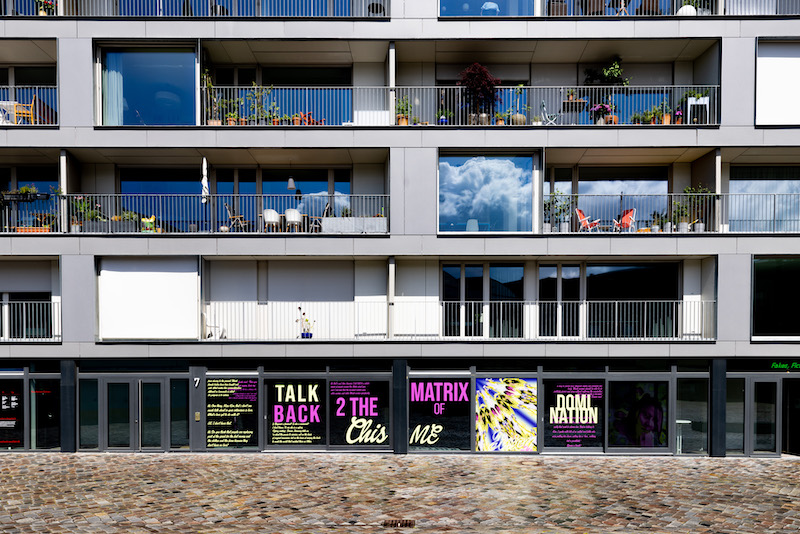 Despite being interesting in their own right, the remaining two works by Ehrenstein and Paneng appear to have little to no place in the curatorial vision. Ehrenstein’s site-specific work ‘talk back’ (2022) pays homage to the late bell hooks—it references her ‘Talking Back: Thinking Feminist, Thinking Black’ (1989) and proclaims the productive potential of talking back in a large-scale window front installation. Meanwhile, Natalie Paneng’s video work ‘Nicetopia’ (2021) manifests the artist’s feelings of alienation from social media by creating a trippy virtual reality where she appears as a Sims-like character. She aims to create a space of play for black female bodies, which is a worthwhile goal but not directly connected with the curators’ chosen theme. 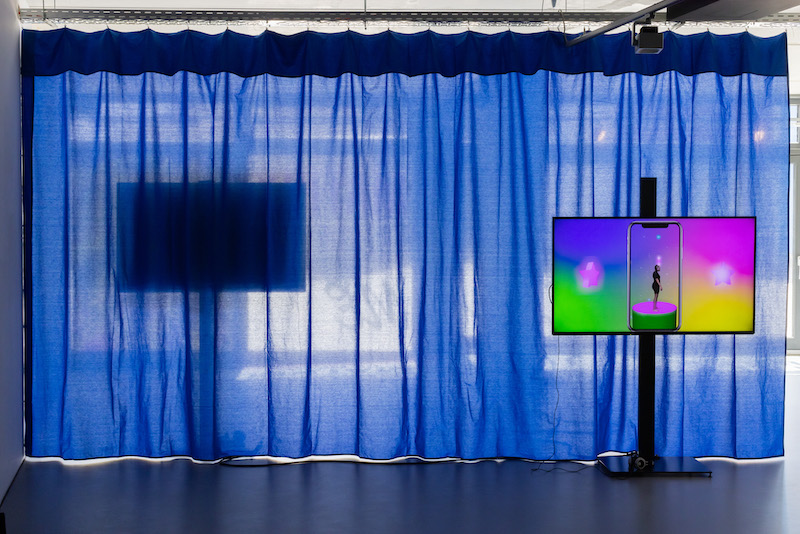 Within the context of the exhibition, the idea that gossip can herald positive ramifications continues to feel illogical. While ‘GOSSIP GOSSIP GOSSIP’ considers the act as a powerful means of strengthening bonds and establishing an array of female identities, the works of Heinisch and Pierwoss contradict this notion. The fakery that makes up the image of Woman in show business and the media is commented on critically in both works—be it intentionally or not—but, in the end, they continue to build upon the commonly held preconceptions of gossip. The only productivity gossip evidences in these works, is its function as a lifeline to sustain drama and attention in the service of profit. This undermines its potentially emancipatory role. While talking about others may offer fleeting benefits—think Harari and Wilson—‘Fakes, Fictions and Forensics’ does not succeed in reformulating the concept in a positive light.