Summer falls on the oasis of Wedding’s silent green. The ex-crematorium turned Kulturquartier presents an exhibition that begins on the sunlit grass outside then travels underground into the multiverse of Agnès Varda’s “third life,” as she herself referred to her artistic practice. This is the most comprehensive exhibition since her death in 2019. With what feels like a personal invitation, likely thanks to the intimate offering that was organised by curators and long-time friends of Varda, Dominique Bluher and Julia Fabry, we are ushered through a passage into stillness, innocence and misfit potatoes. The exhibition oscillates between themes of individualism and collectivity making us feel connected to something universal within the individual experience. 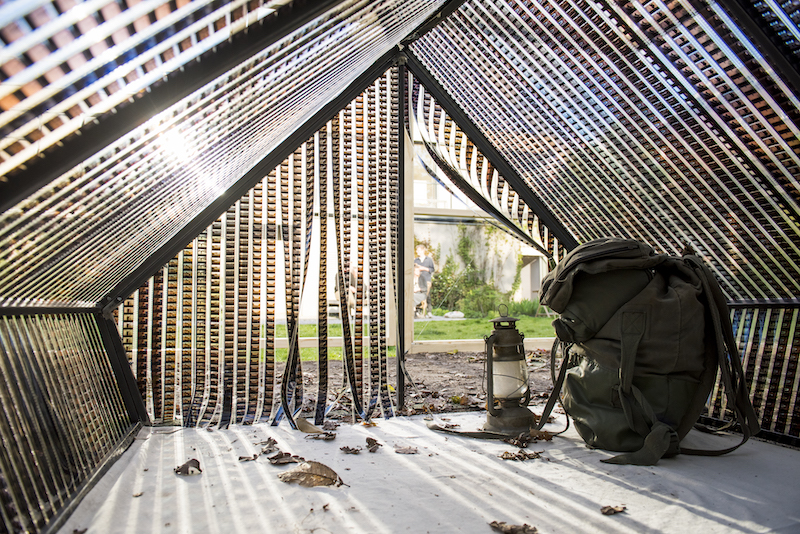 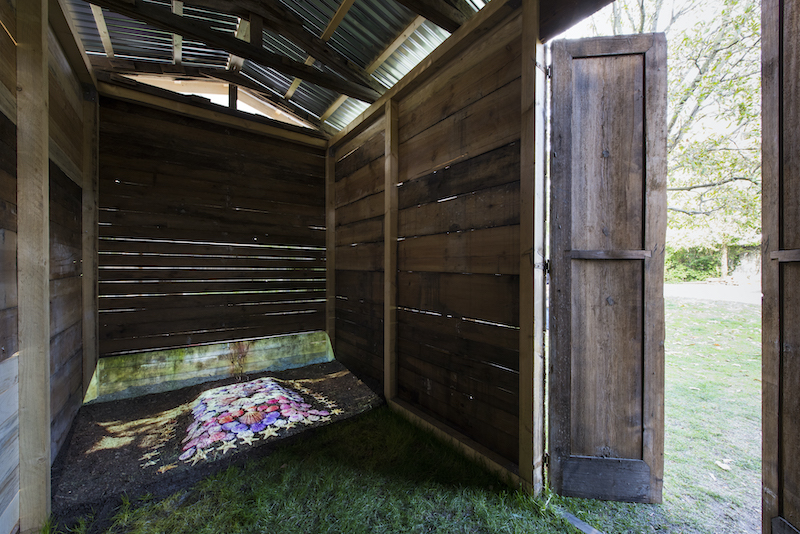 By adding value to the work through location, as Varda did with her installations, we become enveloped in a different world as we interact with it. Silent green’s unique history sets the perfect stage for receiving Varda’s work. This is especially true of the mausoleum dedicated to her beloved cat Zgougou, ‘Le Tombeau de Zgougou dans sa cabane’ (2006). The work consists of a shack containing a video installation of his grave projected onto the soil outside the exhibition space. When we step out of the shack, we are aptly greeted by the cemetery next door.

Through the portal-like passageway down into an expansive underground exhibition and concert venue, the almost intimidating blank canvas of vast grey space is filled with Varda’s life and work. Here, in the Betonhalle, we are confronted with some 20 photographic and video installations. As we enter, a three-part mixed-media installation of a beach seems so realistic, that the water almost washes at our feet. Our gaze focuses on something new each time we look. While giving a tour of the show, Bluher remarks, “a different part captures my attention each day.” Today, it is the waves. 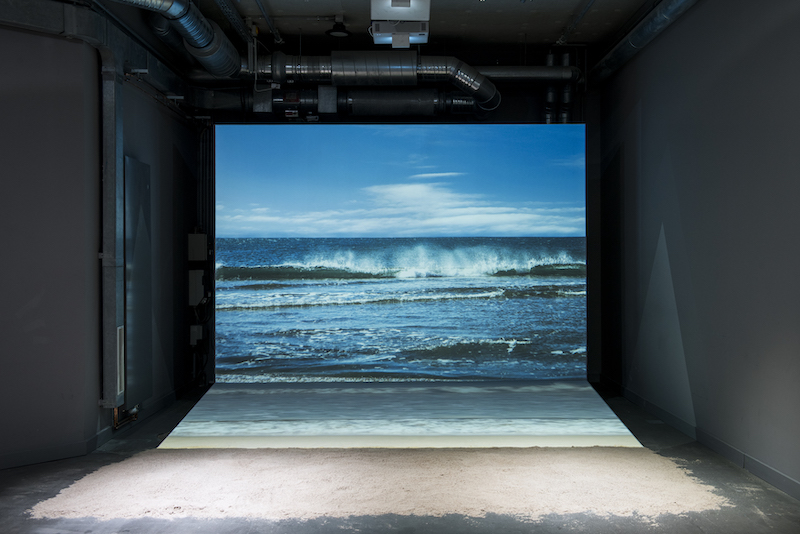 In her third life, Varda dedicated time to installation. Nervous that she would be unsuccessful, she advertised her first show by dressing as a potato so as to convince people to attend. Varda trusted in curiosity and experiment. She would follow a fleeting idea or a deep emotional movement while maintaining a mischievous yet caring approach to life as well as death. Children appear often in her films and photographs reminding us that a childlike perspective might help us to feel lighter. They teach us that looking without preexisting ideas allows us to see something new. This approach is epitomised in ‘Ulysses’ (2012). The photograph-turned-short-film tells the story of a dead goat next to an injured boy, and her TV programme ‘One Minute for One Image’ (1983), which focuses on simply describing a photograph and explaining why it is endearing to her.

Even in her photographs, Varda’s work does not remain static. Her work opens up and invites the viewer to daydream. We immediately start to fill in the missing story in our minds as we slowly make sense of scenes as in ‘Instants Arrêtés’ (2012-2016), stills from ‘Vagabond’ (1985) and the collection of photographs ‘3 Images en mouvement, 3 Rythmes. 3 Sons’ (2018). In addition to exhibiting her third life, the show also pays homage to Agnès Varda’s earlier life as a photojournalist, when she worked in China, Cuba, Portugal and Germany. As we meander through the images of different personalities, a remark from Bluher’s accompanying curatorial text comes to mind: “the body moves in Agnès’ work and the viewer must also move to experience this exhibition.” In many of Verda’s works, individual activities relate to universal ones, like in ‘Walking Pictures’ (1950-1960). A sort of separate togetherness is consistently found in Varda’s practice, playfully existing alongside tales of misshapen potatoes from ‘The Gleaners and I’ (2000) and stories about the people of rural France. With her divine framing and sometimes jarring placements, which are often shown in sets of three, the viewer’s gaze is drawn to an unsuspecting part of the artwork, causing one to question why attention is attracted to certain places. This is a balance of ambivalence. These seemingly unplanned, candid photographs are like miracles. 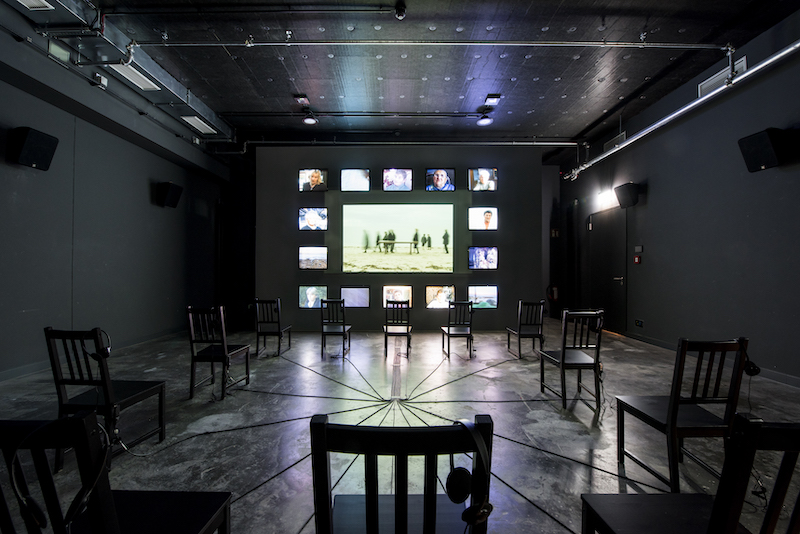 A sense of individual collectivity is furthered in the piece ‘Some Widows of Nourmourtier’ (2006). Filmed and framed under the inspiration of predella, Christian mediaeval and renaissance altar paintings of saints, these widowed women are interviewed about their departed loved ones. The work consists of a large screen framed by fourteen smaller ones around it. You can’t hear anything until you sit down and listen through the headphones on each chair, which in turn are placed in the room to reflect the position of the fourteen small screens. The intimacy that Varda shared with each of the widows is recreated in the viewing of the piece. By choosing your place and choosing to listen, the viewer engages in their own personal encounter with each individual, who share their tales of love and loneliness. Even the connecting cables of the headphones evoke associations that support the story. Taped to the ground and meeting in the centre of the room, they act like threads that strengthen the theme of simultaneous connection and detachment, individual and collective. Everyone is brought together by death: the widows, the absent husbands, and each of us watching, but the experiences remain intimate, individual and unique. The interviews are matter of fact, without too much sadness or seriousness. They just are. Much like Varda’s approach to death, the widows approach the subject without fear. In participating and observing, you become a part of the installation. Agnès Varda asks you to become both the actor and the artist, which is an invitation the exhibition as a whole also extends.