We often forget that the nation-state is a modern construct in political discourse. It’s only in times of war or crisis that its imaginary borderlines and principles show themselves to be fragile. In these situations we would do well to ask ourselves what it means to uphold the values of this institution. Capitain Petzel’s group show, ‘the state I am in,’ curated by Elisa R. Linn and Lennart Wolff, does exactly that. Presented are a number of works that scrutinise the various acts of representation which form the nation. Spanning a time period from WWII to the present as well as a variety of state systems, the exhibition showcases the way art is implicated in the struggle for representation and rights while also maintaining a critical stance to the artistic image and the promises of the nation-state. 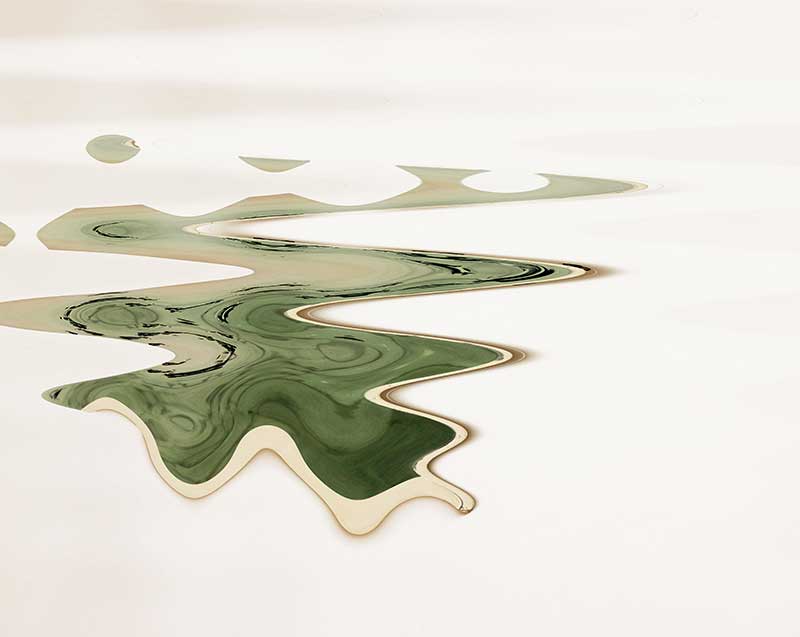 Louise Lawler’s ‘No Drones (adjusted to fit, distorted for the times)’ (2022), dominates the lower floor of the gallery space. Her adhesive vinyl print reaches up to the balcony-tier on the North-West wall—arresting the vision with its scale. Lawler’s artistic practice has long been concerned with the relationship between the presentation of artworks and the context in which they are viewed. Here, her dominating use of scale in comparison to the other works refers back to the imperial nature of national display.

In 2011, the American artist first exhibited the work ‘No Drones’ in conjunction with the official end of the Iraq War. ‘No Drones’ is a photograph of Gerhard Richter’s oil painting ‘Mustang-Staffel’ (1964), which depicted a squadron of Allied war planes in the act of bombing Nazi Germany. Lawler took her photograph from an angle that revealed the canvas edge. At Capitain Petzel, she presents a digital distortion of her original photograph, cunningly adjusted, as noted in the title, “for the times.” A sort of blurred topography is visible inside a large squiggle-shape set in sharp relief against a hazy white background, as though a distorted border of land were sitting within the clouds. Simultaneously it looks like paint thickly squeezed onto a canvas, thus alluding to the artificiality of her own representation. In the top left corner of the image, the outline of a bomber plane can be made out through the arrangement of circular cut-outs and the triangular form. They are barely visible, stealthy, almost concealed.

As a re-represention of a work made more than ten years ago, ‘No Drones’ constitutes a kind of chemtrail of war—from the Allied bombings, to the Iraq war, to ongoing militarism in the form of everyday covert surveillance—thereby drawing attention to the displacement and shifting forms of power. Lawler’s curious vantage point and distortion technique seems to slice through her own representation of the contemporary state to suggest that art’s ability to comment is also warped.

Around the corner hang four works by Dutch artist Jacqueline de Jong from the series ‘Upstairs-Downstairs’ (1984-1988). They are sketchy, figurative drawings with shades of surrealism. The charcoal, acrylic and crayon works feature a series of monstrous figures, which the artist has referred to as “Roman punks,” entangled in violent, but humorous assemblages. This series responded to the building of a new city and opera hall in the 1980s, Amsterdam’s Stopera, which was proclaimed a new representative site for political administration and high culture, but also criticised for pushing a violent clean-up agenda of gentrification. In response, de Jong’s series of drawings portray an imaginary situation, where squatters occupy the newly built institutional edifice. In ‘Untitled (Upstairs-Downstairs)’ (1985), a swollen monstrous figure is caught in flight. It seems to chase another figure down the stairs and out of the building. The sketchy, colourful style seems to reduce the dispute to something simpler and childish, thus perhaps mocking the decorum of high culture and the hypocrisy that it veils.

Leyla Yenirce’s ‘Being Strong is Hard’ (2021) is difficult to ignore with its techno soundtrack blaring on repeat. The sound violently ruptures the space as if in an act of protest. Teasingly tucked away on the upper floor of the gallery, her four-minute video installation presents a barrage of images of women caught in moments of resistance: Kurdish women armed and clothed in military gear, freedom fighters, journalists. The various images are zoomed in on on different parts of the face or awkwardly cropped at the eyes, honing in on the facial features of the women in a manner which resembles the criminal identification photos that appear on news channels. 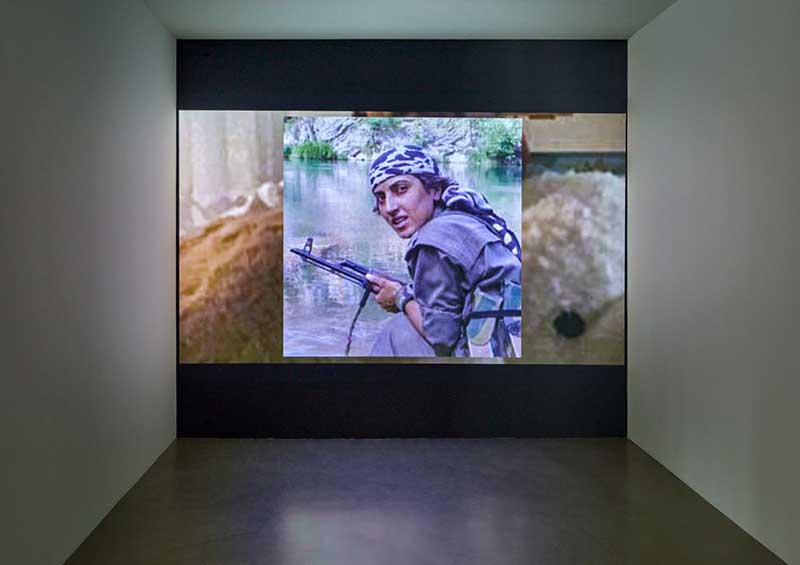 The images come from an archive of photographs taken on digital devices or found on the Internet. Out of the dataset, a rapid image carousel continuously re-produces, rotates and circulates the pictures. The film seems to assume an aggressively feminist position— forcefully showing us the often missed-out roles of women in violent acts of resistance and heroic stories of war. At the same time, with its news-reel like montage, it demonstrates how an image can be misrepresented in the media. Framed in such a way that each woman could simultaneously be interpreted as passive, militant, victim, aggressor or hero, the film demonstrates the way that singular narratives can be extracted and dangerously re-circulated across borders.

Each political system is undercut by the individual artworks and their positioning to one another in ‘the state I’m in,’ thus prompting the question of what the legacy of the nation-state really is. The show itself portrays a kind of timeless narrative of rise and decline. It points to what is left out, misrepresented, falsified and fixated on in the traditions, symbols and myths that build and define a nation. The artists refer back to their own methods of display and representation, reminding us to look around the edges of the frame and not slip into the illusion of completeness that a well-built narrative creates.