This article is part of our feature topic ’SLOW.’

Andrea Fourchy’s recent exhibition ‘Bachelors’ at Société had me thinking about the origins of the term ‘jetset’ as a shorthand for evoking the glamourous and grand. As usual, there is a murkiness about exact origins, but the internet seems to widely accept that it was a society reporter (how apropos) who went by the absurd pen name “Cholly Knickerbocker”; his real name, Igor Cassini, apparently didn’t evoke quite the same air of Old Money insiderism. The jet set were defined as those most glittering of glitterati who had it and flaunted it by using—wait for it— “aeroplanes” for transatlantic pleasure travel! In the late 1940s and early 1950s when the term bubbled up from the gossip pages, jets were the preserve of the most privileged among the privileged. In the intervening years, of course, air travel has been democratised and with it a common carbon inheritance for future generations. Speed and time have a complex relationship, as Fourchy’s works highlight, especially in a medium as slow as painting. 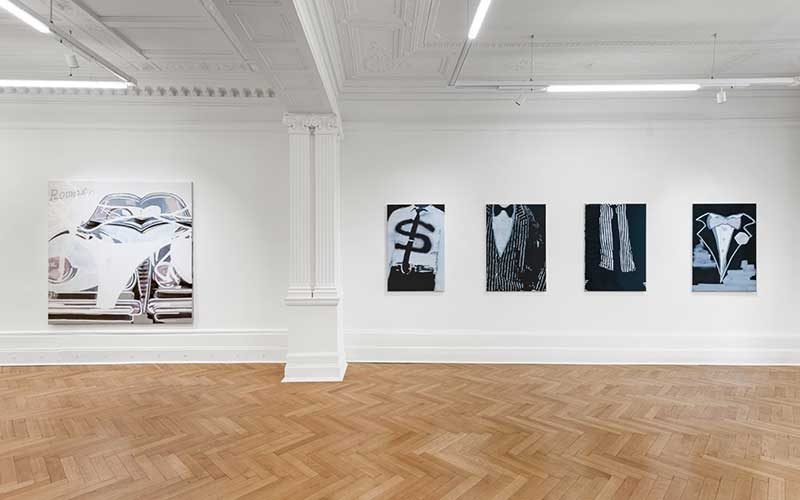 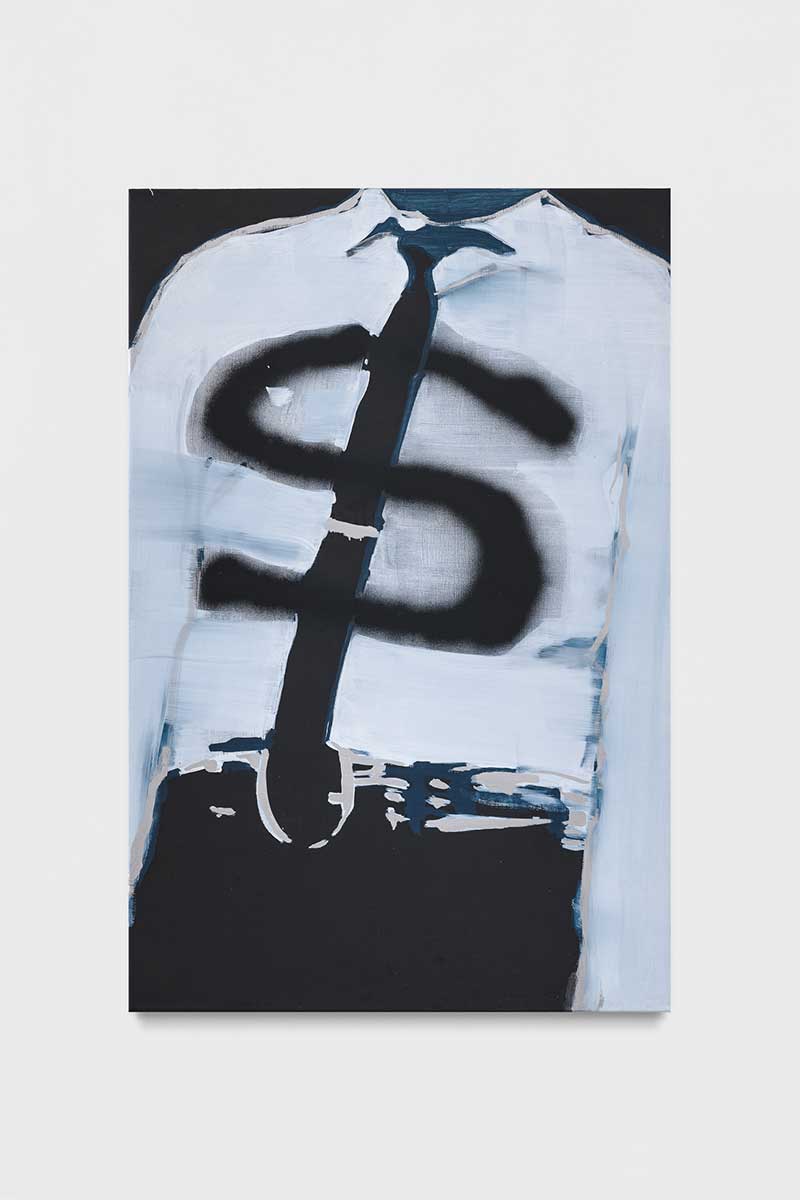 Many of the images adorning Fourchy’s canvases are drawn from the golden age of post-war cinema and glossy magazines when Jet Set 1.0 ruled the skies. Looming over all others amidst the cavalcade of Alfa Romeos and Rolls Royces is 007 himself, in his many incarnations. Where once Bond was a byword for a certain kind of risqué allure—intrigue, luxury consumption and male sexual incontinence—more recent Bonds have not only been more introspective, but have challenged the kind of imperial status-chasing that earlier incarnations defined. This change has moved in a long arc. The Bond of Fleming’s novels is, if anything, even more loutish, sexist and racist than the on-screen versions, and this slow evolution is interestingly explored in one of Fourchy’s Bachelors. In the work, the many faces of Bond appear. Some, like the debonair Bronson iteration, are more realistic; others, like the troubled Craig, bear more painterly flourishes and adventurous palettes. I, for one, greatly appreciated her counter-canon inclusion of David Niven as Bond in the moronic farce version of ‘Casino Royale.’ Niven’s goofy, boozed up grin floats as something like the inner Bond; beneath the suave facade is a louche buffoon at the mercy of forces greater than himself, constitutionally unable to recognise himself for the cypher he is. This compression of temporalities, turning decades of evolution into a single image makes this one of Fourchy’s conceptually richest ‘Bachelors.’ 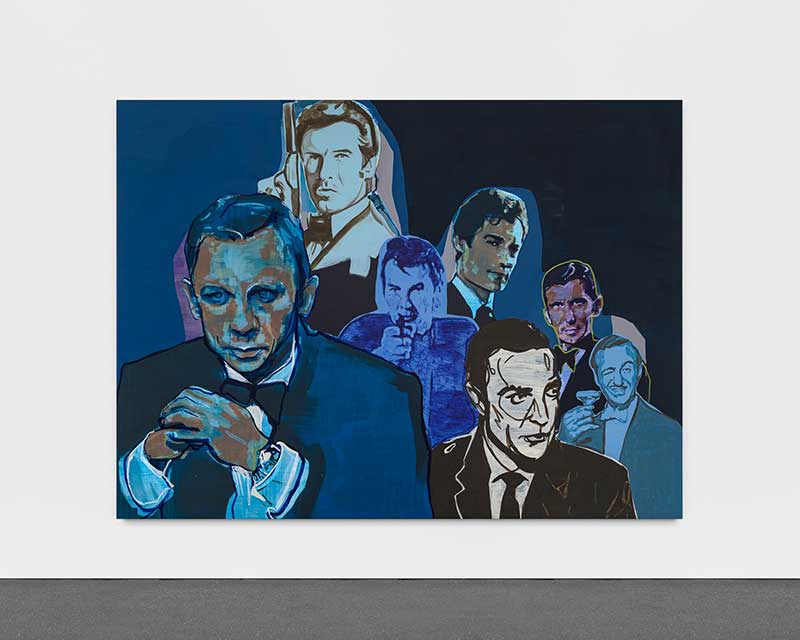 It is a highly literate exhibition, from the Duchampian title, to the signifiers that float through certain canvases: Warholian bananas and renderings of a more modest Helmut Newton tableaux. These art historical engagements make for an amusing bit of spot-the-reference, but it is ultimately the tropes of performative masculinity that Fourchy seeks to trouble. Whether they are the “jet set” or the “Beautiful People,” or “Camelot,” or Evelyn Waugh’s “bright young things” their lives are defined by consumption, the more conspicuous the better. Often that consumption regarded women as another luxury commodity to be used and discarded as the season and desire dictated. Fourchy’s works are skilled at alluding to this dynamic without descending into sloganeering. Often this is done through the appearance (or lack thereof) of clothing—a bikini top or bottom here, a strategically placed banana peel over human skin there. A number of Fourchy’s ‘Bachelors’ focus on the clothes that make the “man.” A series of black and white paintings of formal wear including headless tuxes, neckless scarves, and chestless tuxedo t-shirts also concerns itself with the obsolescence over time of the glamour Bond evokes for some. What starts as formal evolves to becoming a parody and finally into absurdity and satire. Fourchy takes viewers through the catalogue of Baudrillard and Barthes’ tailors tracing her own unique seam. 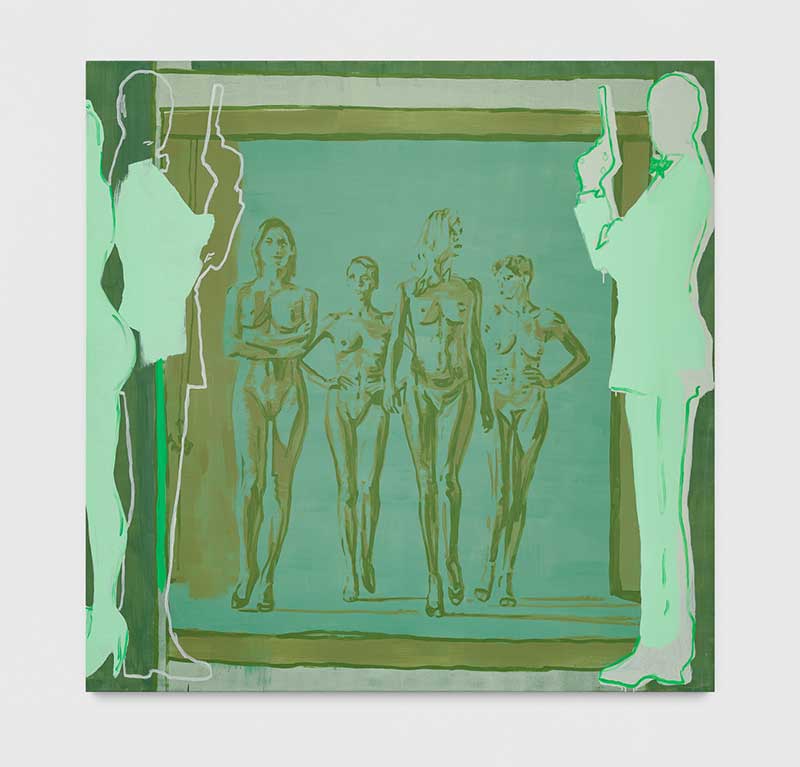 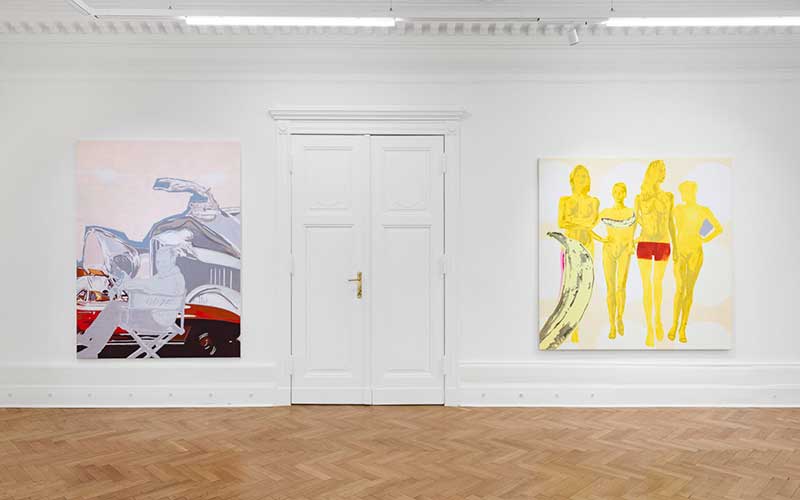 To return briefly to the conceptual element of Fourchy’s works, there is an interesting paradox in using a slow medium like painting to explore the hyper-fast medium of film, and in distilling the full sweep of a film series spanning decades into a single canvas. The compression of time, the impatience that infuses every human interaction as the advance of TikTok and other apps chip away at attention spans, and the latency between desire and satiety renders many products and ideas obsolete before they even exist. Fourchy’s works seem to pose a more troubling question however: what happens when an obsolescent idea hangs around despite its own redundancy or pathology? The kind of jet set consumption patterns and traditional masculine mentalities that her works address are still with us, though increasingly in a more Niven-esque guise as opposed to their cocksure Connery forebears. Ideas are slow to die, especially bad ones. Will canvases satirising them come to seem more like tombstones or monuments? Only time will tell.