Manifesta 14 provides one of those rare instances where the exhibition space is as interesting as the exhibits they contain. The epicenter of this year’s biennial, held in Prishtina, Kosovo, is a building called the Grand Hotel. Constructed on orders of Yugoslav dictator Tito, the hotel accommodated party officials, foreign diplomats, and other distinguished guests until it fell into disrepair during the late 80s. 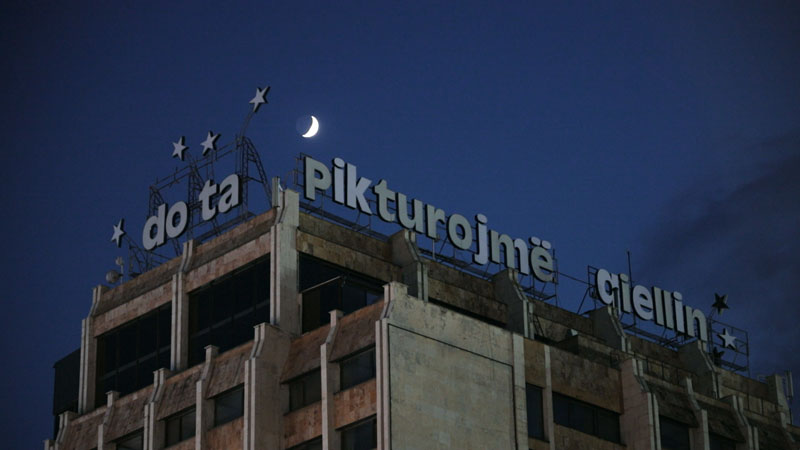 Now it accommodates artwork. Every floor has a different theme, ranging from ecology to capital to speculative fiction. In her exhibit ‘Grand Hotel Prishtina’ (2022) local artist Majlinda Hoxha made a small part of the building look like a hotel again, with carpets and chandeliers and furnished bedrooms that visitors are free to explore. In place of the Grand Hotel’s paintings—which were pawned by its first post-Soviet owner—Hoxha presents her own photography.

Where Hoxha’s contribution is set in the past, the rest of the hotel exists in the present, which, in this case, also doubles as a post-apocalyptic future. ‘Ring the bells my land’ (2017/2022), a multimedia installation by the Prizren-born artist Doruntina Kastrati, blends flawlessly into its deteriorating environment. Piles of broken tiles, which visitors are encouraged to step on and further pulverize, resemble the surface of Mars while simultaneously reminding us of cities on Earth that have been blown to bits by urban war.

‘Seapussy Power Galore – Abcession (If you don’t know, you don’t grow)’ (2021) by Dutch artist Mette Sterre, located on the top floor of the Grand Hotel, does something similar. Glossy green globs cover the walls and drip from the ceiling of what might have possibly been the hotel’s penthouse suite. A short curatorial text plastered on the side mentions mermaids, myths, and machines, but these themes play second fiddle to the first impression made by the work. It presents the Grand Hotel as a living, breathing, but sick and suffering entity.

Placed in this unusual location, many artworks, especially those by foreign artists, acquire meanings that their creators may not have originally intended. Would Sterre or Selma Selman, whose short film ‘Mercedes Matrix’ (2019) shows her family smashing a Mercedes Benz, a well-known symbol of luxury in the Balkans, object to these interpretations? Probably not. After all, Manifesta founder Hedwig Fijen has talked at length about the idea of “co-creation”: co-creation between artists and visitors, internationals and locals, and between Manifesta and the city of Prishtina.

Integral to “co-creation” is Manifesta’s effort to help Prishtina reclaim its public spaces. As Dutch journalist Sandra Smallenburg writes in ‘NRC Handelsblad,’ the biennial has developed into a “social platform that wants to leave a lasting impact on its host cities.” Her article includes a picture of student volunteers repainting the exterior of Prishtina’s old Brick Factory, a place that prior to Manifesta’s arrival had been used as an unregulated garbage dump.

The city had wanted to clean up the Brick Factory for a long time but lacked the funds necessary to propose an initiative of this sort. Fijen has stated that 3.1 of Manifesta’s 4.9 million budget—amassed from sponsors across Europe—was invested in Prishtina with the intention of making the city a better place for its residents. When Manifesta leaves, its exhibition spaces, from the Brick Factory to the Grand Hotel, will hopefully be used by the city for new shows, workshops, and cultural events.