The idea of art as a means of survival has a long history in former Soviet republics. Take this verse from the poem by Latvian poet Ojārs Vācietis, which was the inspiration and provided the title for Riga’s 13th iteration of Survival Kit, an annual art festival curated this year by iLiana Fokianaki:

The little bird must be caught,
Caught right by his tail,
Put in a box behind bars
To sing and practice scales.

Written in the late 1970s, it clearly, if also light-heartedly, speaks to censorship and indoctrination. The voice of the bird is forced to toe the line, to repeat slogans rather than sing freely, only, in the end, to be eaten by a “tomcat with red whiskers.” Vācietis used animals as stand-ins for the different actors in the psychosocial drama that was the Soviet State. Compact, produced with little to no means, sometimes distributed through word of mouth alone, poetry was popular in all the Soviet republics. It helped people retain feeling and, through its metaphorical flexibility, a grip on reality and belief in the possibility of another life. 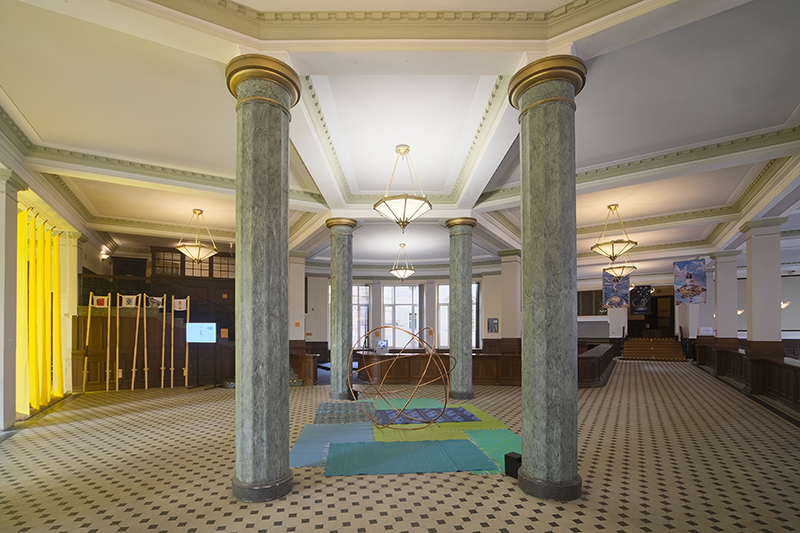 Latvia’s past Soviet occupation sets the stage for this year’s Survival Kit, ‘The little bird must be caught,’ which takes on a note of urgency in a time when history threatens to repeat itself. Since 2009, when it was conceived as a response to the world financial crisis, the festival has been presented in a variety of empty buildings in the city. This year its host is the Riga Stock Exchange Bank Building (1887–1888) in the centre of the capital’s Old Town. Empty since 2014, the bank is a time capsule with its original lamps, counters, wallpapers and massive wooden doors. Against this backdrop the contemporary art comes into direct contact with Riga’s history, a contextualisation not possible in a white cube gallery space. Shown together with archive photos of “The Barricades,” when the citizens of Riga mobilised against the invading Soviet forces in January 1991, the works become something other than objects of aesthetic contemplation—they are also metaphorical barricades against a loss of culture and regional identity, but hopefully their effect will not be to gentrify a city that still has the chance to avoid the pitfalls of Berlin’s rapid development. 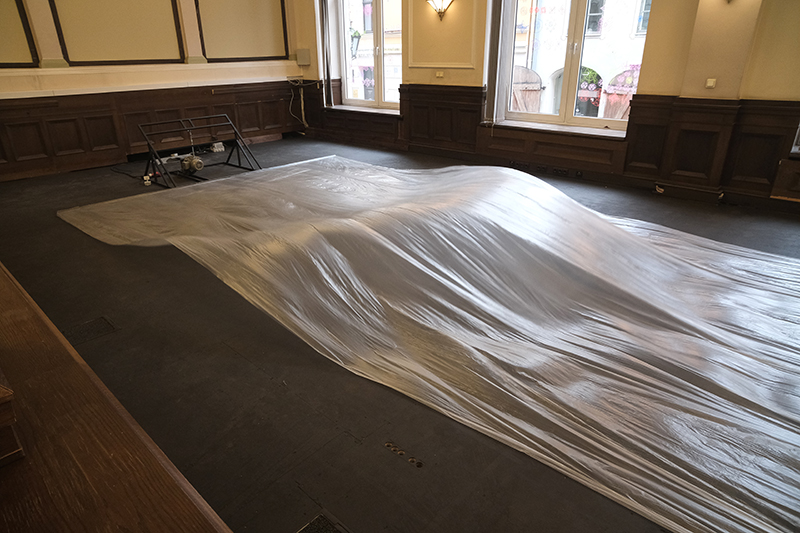 Upon entering the old bank one is confronted with green marbled columns, long, dark wooden counters and a high ceiling with coffered moulding. At first the art looks haphazard, sometimes even shoddy, but gradually the relationship between the space, the visible traces of time and the contemporary interventions becomes apparent. Two deceptively simple works by Latvian artist Krišs Salmanis make particularly good use of this threefold layering of context by manifesting apprehension in physical form. ‘Wake Me Up When It’s Over’ (2022), consists of an approximately 10-metre long piece of thin painter’s plastic sheeting—precisely what one could expect to find in this old building in dire need of renovation. On one end it is attached to a long rod that in turn is connected to a motorised apparatus that occasionally lifts the rod about a meter off the ground and brings it back down. This simple movement traps a wave of air under the sheet which then travels slowly, steadily, evoking ominous associations to a tsunami, until it extinguishes at the other end. ‘Strategic Patience’ (2022), installed in the tower of the bank, is a piece that will go unnoticed by most. At the highest point of the tower a large bottle of water and a long plastic tube attached to an eye dropper are installed. The bottle slowly feeds water into the tube, while a tiny drop builds at the end of the dropper. Eventually this drop will fall about five stories, past the potential viewer on the first floor and further down into the basement. Many people will look, wait, give up and go away, but perhaps some will sneak past the black and yellow plastic tape blocking the stairs to discover the slowly swelling droplet on the top floor.

Interestingly, the most compelling works in the show were those not from the internationally celebrated names, of which there were more than a few. Susan Phillips, Candice Breitz, Laure Prouvost and Forensic Architecture gave the festival an international sheen and even a sense of prestige. The various regional voices, on the other hand, gave it specificity and uniqueness. 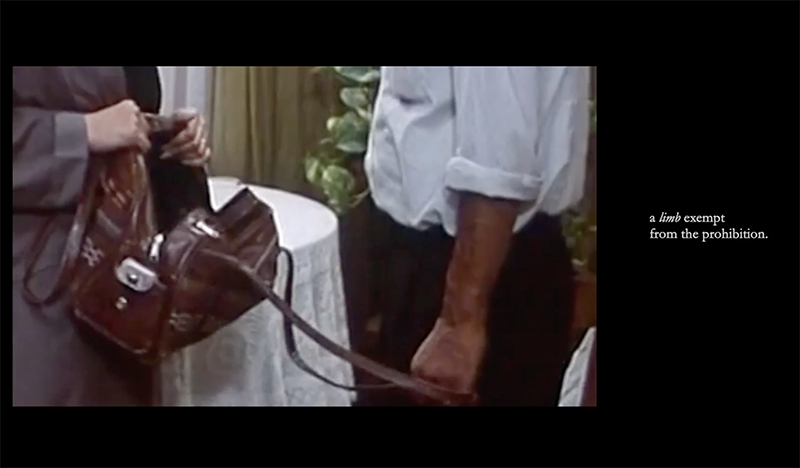 Particularly touching, and now increasingly relevant after the arrest and murder of 22-year-old Mahsa Amini, were two videos by the young Iranian artist Maryam Tafakory. The works cast a sympathetic and much needed glance on a culture so far removed from the cold Baltic shores. Shown on old cathode ray tube television sets, her collages of film clips and poetry focus on the ban on showing touch between men and women in Iranian cinema. ‘Nazarbazi’ (2022) highlights the ways desire and physical contact is portrayed without the protagonists ever touching, while ‘Irani bag’ (2021) zooms in on the bag as a mediator between bodies of the opposite sex. As in her simple yet disarming opening night performance, ‘Where is she?’, the works encompass the state of tension between desire and its prohibition. Set in a muslim universe, they portray a struggle with the primary edict of Islam found in the meaning of the word itself—“submission.” 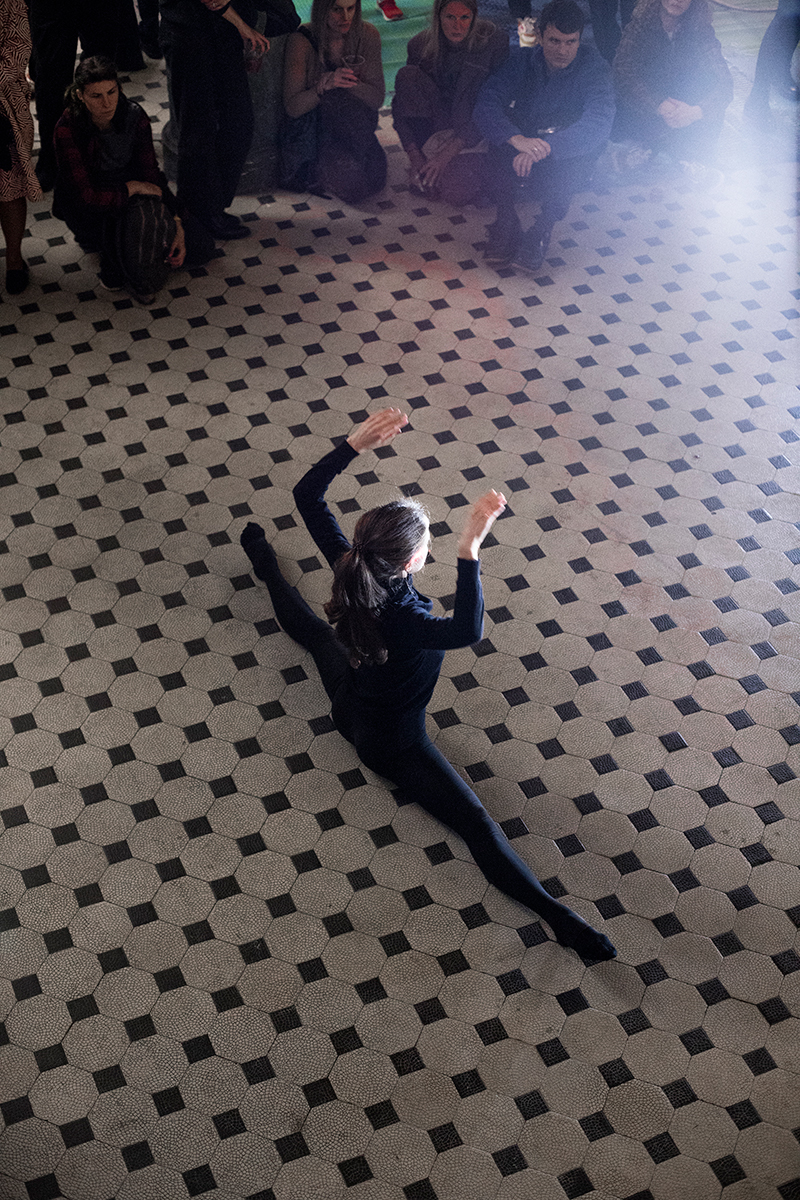 Darja Khalashnikova: ‘How Long Can This Last?’ 2022, performance at Survival Kit ’13 // Photo by Annemarija Gulbe / LCCA

A powerful opening night performance was Darja Khalashnikova’s ‘How long can this last?’ (2022). Dressed in black, the young artist performed a kind of acrobatic dance on the floor wherein, through a series of arm movements and splits, she made herself into a human clock ticking off recited dates, from February 23 to the opening night, thus marking the 191 days of the Russian invasion of Ukraine. Though the added context peripheral to the performance—a few A3 sheets with the names of Ukrainian cities scribbled in red and splattered with bullet-like dots, two red laser points aimed onto her body at all times—made the work illustrative, as if the artist were afraid that her intent could be missed by the Aperol-drinking audience, it still managed to retain its power as a visceral and heart-wrenching endurance of time. Even the people who chatted and eventually walked away became a reflection of the waning attention spans in the media and the danger of the world “getting used to” the war. 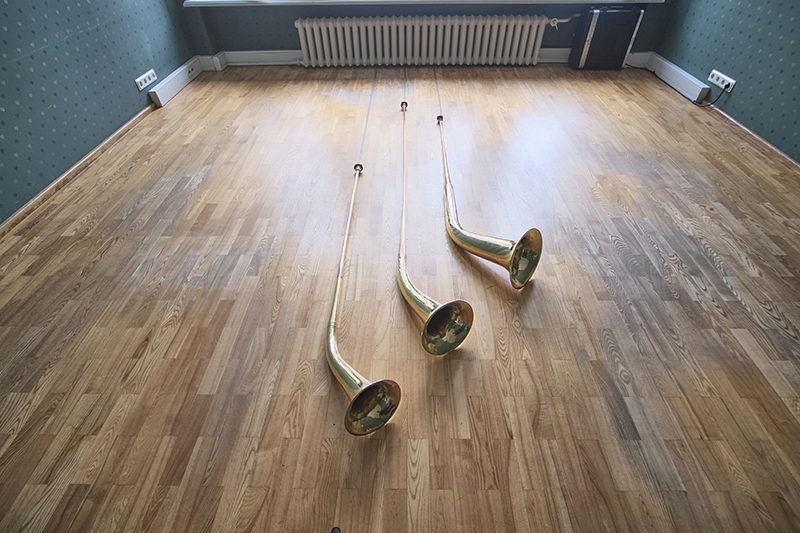 Other impactful works included Kazakh artist Almagul Menlibayeva’s ‘AI Realism. Qantar’ (2022), showing AI renderings of authoritarian power, Kapwani Kiwanga’s two audio installations—‘*@!!?*@!’ (2022) and ‘Tongue’ (2007)—in pitch black rooms and Andrius Arutiunian’s sound work ‘Arizona Club’ (2022) featuring three custom-made brass horns, to name a few. iLiana Fokianaki’s sensitive and balanced curation has produced a show that doesn’t privilege one model of art over another but incorporates them all as necessary and mutually complementary elements of culture. Thematically, Survival Kit ’13 indeed addresses what it means to survive, but as an exhibition and a city-wide event, it demonstrates more than mere survival—it is a proposal for how we can build a future in which we can flourish.