This article is part of our feature topic ’OIL.’

On one of those record-breaking hot days in early September, I took a train to Neuss to see Julian Charrière’s latest show at the Langen Foundation. The venue is located just 20 km outside of Düsseldorf in the Raketenstation Hombroich, a former NATO-rocket station and now spectacular museum cluster. Still with images of ice in my head, with which the artist has been associated since his ‘The Blue Fossil Entropic Stories’ (2013), I wonder what role fire and fossil fuel will play in the exhibition ‘Controlled Burn.’ 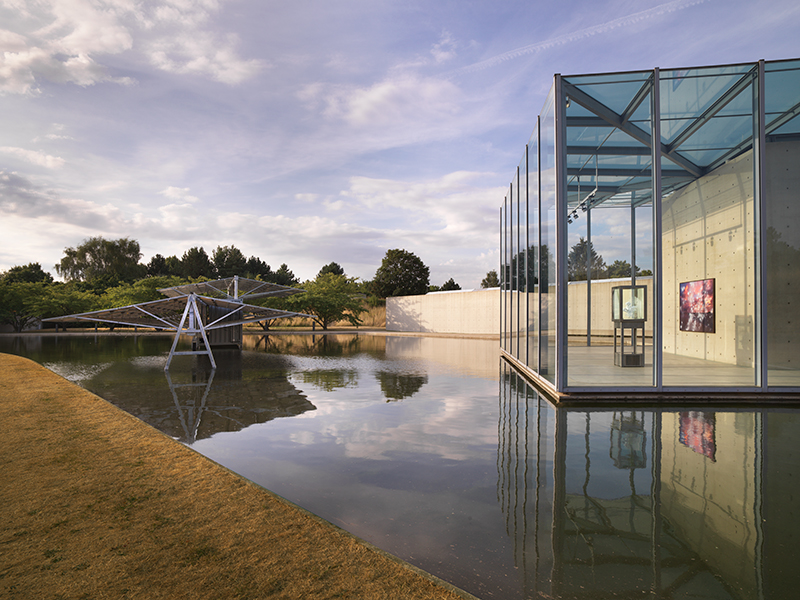 It has been a wild ride for Charrière these last few years. Despite—or perhaps because of—a global pandemic, the young French-Swiss artist has realized one large-scale solo exhibition after another: Berlinische Galerie in 2018, MAMbo in 2019, MASI Lugano in 2019, Aargauer Kunsthaus in 2020, Dallas Museum of Art in 2021, and now ‘Controlled Burn’ at the Langen Art Foundation in 2022. At each museum, he has often shown new commissioned work, rarely small in size. The Langen Foundation exhibition is particularly special because it is also a survey of his work—not all his work and not always presented as full installations, but nevertheless an oversight providing windows into most of his projects so far. The logistics needed to present Charrière’s work while supporting the production of new pieces is considerable. And so ‘Controlled Burn,’ curated by Dehlia Hannah and Nadim Samman, two long-term collaborators and commentators of Charrière’s work, brings to mind questions of sustainability, not only in regards to the exhibition’s theme of burning fossil fuel, but also to the artist’s exponentially growing career. 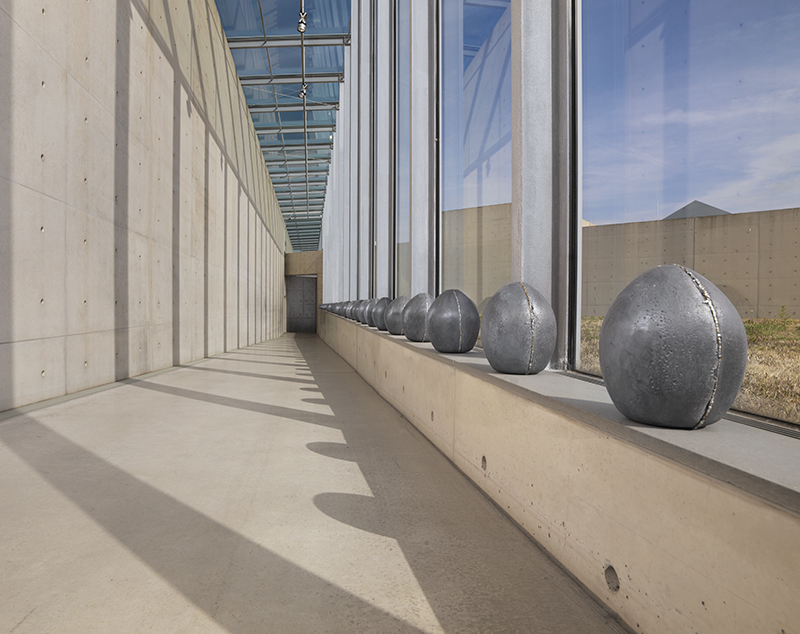 Just a few steps inside the glass foyer of the museum, designed by Tadao Ando, a real living fossil—a plant that has remained relatively unchanged since the Cretaceous era millions of years ago—is displayed in a custom-made glass vitrine freezer. ’Tropisme’ (2015) is a spectacle on this hot summer day as Andos’ architecture turns into a greenhouse. One can only wonder about the amount of energy needed to keep the ice sheets on the plant from melting. I stand in awe before the fragile plant covered in brittle ice as if I were a child from Macondo upon the arrival of Melquiades’ train of ice and fire in Garcia Marquez’ novel ‘One Hundred Years of Solitude.’ I marvel at what appears as the impossible. Never before have I seen a work like this, so brutally exposed to the sun, articulating the futility of preserving the status quo—a living fossil that, against all odds, has survived various extinction events and has now turned into a conservation nightmare.

Just the preservation of this one artwork presents serious questions about how we deal with art. The material necessities of conservation— including the possibility to repeat and re-realize a concept—rely on the availability of material and energy. Additionally, a cretaceous plant has to be found to dip it in dry ice. Once we reach a critical point of climate change and these plants go extinct, Charrière’s work will cease to be possible. The same thing happens when energy becomes less abundant, when it no longer can be used to keep a frozen plant from melting. Though for now we can rest assured that the German government is securing the necessary gas for energy (over)abundance despite geo-political discharges on the European continent. The crystalline sheen of the ice remains dependent on human decisions and judging from the efficacy of these decisions, we can already start counting down the days.

Gloomy, but not as gloomy as the last glimpse into long-term human existence on this planet, is one of two newly commissioned artworks. In ‘Panchronic Garden’ (2022) you get immersed in infra-red light in a room that is essentially a walkable diorama of a fern and horsetail forest. The space is tiled with a glassy, black carbon product causing the forest to stretch into infinity in the mirrored walls. You are greeted by a disorientation of place and time. Once the eyes adapt, you start seeing the shadowy shapes of what a Carboniferous forest 300 million years ago might have looked like. The installation is a timely relocation to the geological environment of the Ruhr—the region in which Neuss is located and a primary site of carbon deposits and in more recent times, extraction. These forests delivered the organic material that, transformed by heat and pressure over millions of years, has shaped the socio-economic structure of the area. And that is where the most pressing question is articulated: if non-human life millions of years ago has had this geologic, environmental, and socio-economic impact on our present world, then what impact will current human activity have for the coming millions of years? And further, how are we able to imagine or think through our decisions in these timescales? Arguing with science philosopher Paolo Rossi, if there is still a dark abyss of time between natural sciences and the humanities, of the time the disciplines are methodologically able to grasp, how can artists begin to imagine a system of understanding for both human action and planetary time? The future, it seems, is still suspended by contemporaneity. 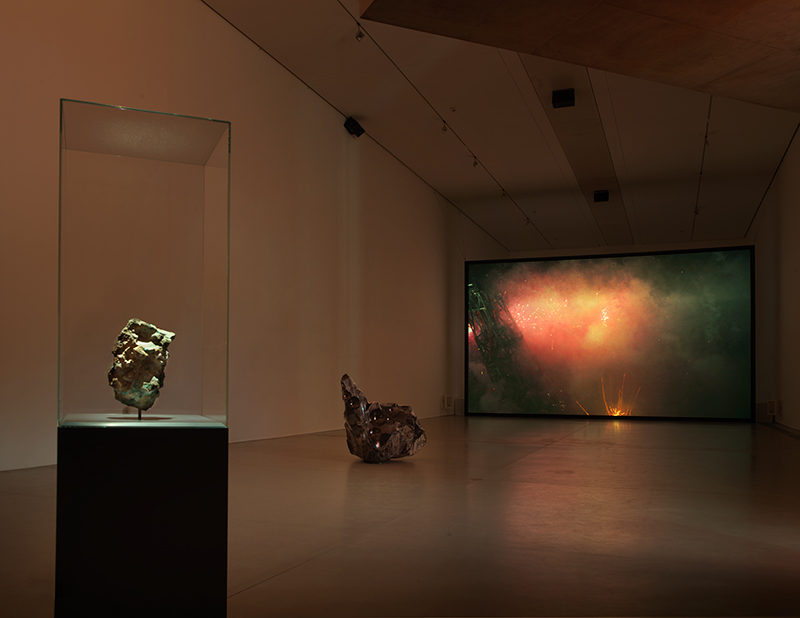 What comes next for a young artist, not even in his 40s but already showing surveys of his work in major institutions? With a biography like Charrière’s, one could wish him a well-deserved break, from which most of us, for whom the news cycle on economic and ecological impact is not just the base for aesthetic speculation, would also benefit. At the same time, it appears the art world has not had enough. In ‘Controlled Burn’ (2022), the eponymously titled large-scale video-installation that fills the largest hall in the museum and is the last of the new commissions, the artist offers a mesmerizing drift through a cascade of fireworks in a cooling tower or rocket silo and an oil platform. Light acts as the main protagonist here; the pyrotechnics fly, crack, and explode repeatedly, rewinding and colliding in mid-air. Their paths illuminate the surroundings while the camera drifts through the sparks in seemingly impossible shots. It is easy to interpret the controlled fireworks as an allegorical allusion to the controlled burn of oil and coal. Missiles are symbols for the slowly but steadily burning capitalist market and its impact on the environment. These film shots appear impossible as they rewind already burnt rockets and unwind the neoliberal illusion that burnt fossil fuel could be undone. Contemporary art still serves us the illusion of timelessness, of forever conserved beauty, of being untouchable by an unchanging nature. Effectively, our culture and its need for energy to maintain an image of suspended time and its consumption of fossil fuel is everything but controlled. It is devastation hidden behind pretty images. 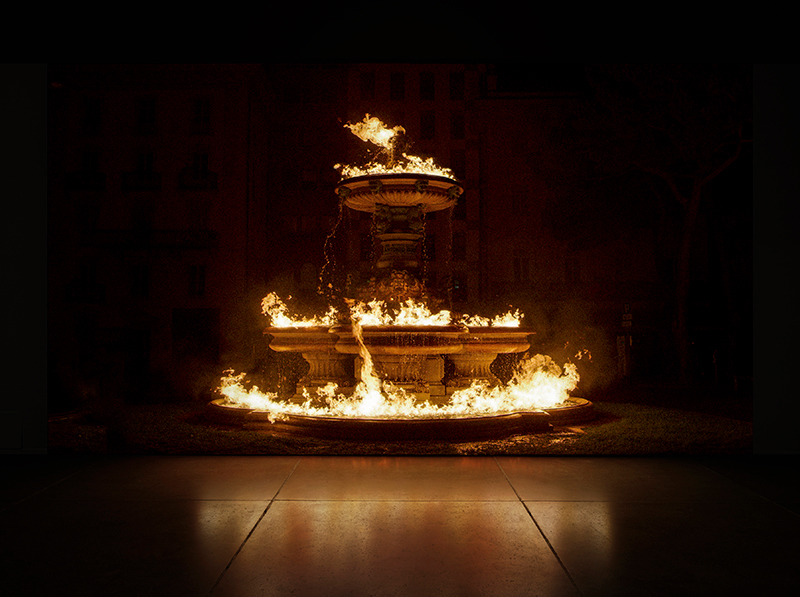 Julian Charrière: ‘And Beneath It All Flows Liquid Fire,’ 2019, Video Still // Courtesy of the Artist; VG Bild-Kunst

On the way back to the train station there is one thing that breaks through the otherwise flat horizon of the Ruhr—the cooling towers of the power station Neurath, the second-largest coal-plant in Europe, which are emblematic of how far back the Russian invasion of Ukraine has thrown the European energy transformation. Charrière’s exhibition is powered by a solar panel at the entrance to the foundation. Yet in this luscious landscape on the outskirts of Neuss, between fields and forests and horticulture, the cooling towers make painfully visible where the energy for the suspension of the future in our culture comes from. It is also clear that time does not stand still, leaving one question to linger in the staggering heat of this September day: what is yet to come?